What it's Really Like to Stay in a Capsule Hotel 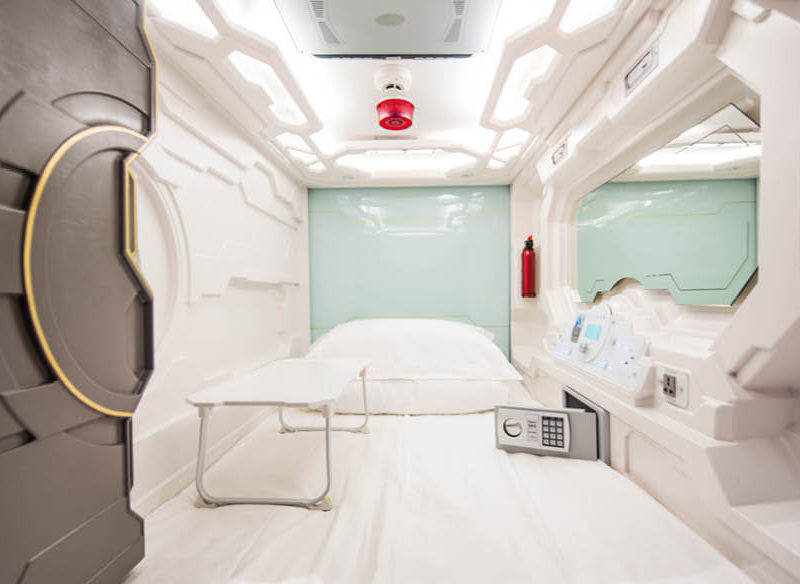 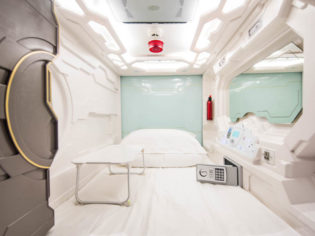 Is there enough room in Sydney’s first Japanese-style mini-stay, The Capsule Hotel, to swing a cat? Steve Madgwick takes the question (almost) literally.

With one hand I swing the cat around my capsule like a helicopter blade. I throw in comical meowing and hissing sound effects for good measure.

With my spare hand, I film it, shakily, on my iPhone. The phone’s battery suddenly dies. I swear at it. I sense a presence. I turn around. I’ve left my capsule door ajar.

A fluorescently dressed Japanese girl in puppy slippers stands behind me in the corridor; back firmly against the wall, eyebrows as high as they’ll go, as if deciding which way to run or whether to cry. From behind, it probably looks like I am swearing at the cat.

She shuffles past, towards the room’s exit, with a look on her face that screams “you’re not well, Mister, and I’m going to tell the world!” Luckily, she doesn’t rat me out to reception. In the middle of an undercover hotel review, it’s a challenge to explain why you’re undertaking the ‘can’t swing a dead cat around’ challenge.

For the record, you can liberally swing Pusheen the pizza-eating (stuffed-toy) cat around the deluxe side-entrance pod (two metres by 1.7 metres) at Sydney’s first Japanese-style mini-stay, The Capsule Hotel, without touching either roof or sides. 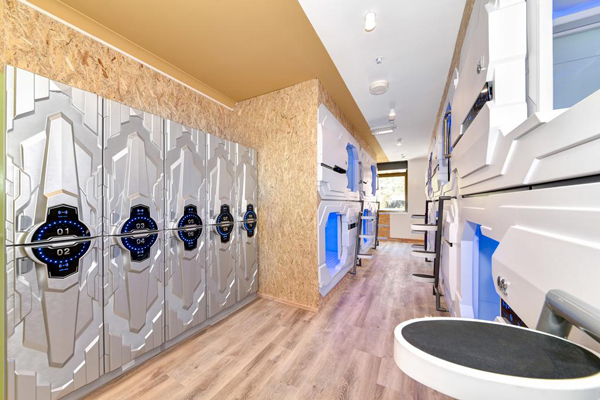 In your room, you get lockers for security.

I pop my head into one of the smaller (two metres by 1.2 metres) front-entrance ‘single’ capsules (that my Japanese friend seems to have left open in her bid for freedom), and I assess that no nylon fur would fly in there, either. Undeterred, I continue my tiny-capsule tests.

I slide across my big plastic door (it definitely needs a Star Trek-like ‘ssshhh’ sound effect) and crudely execute an upward-dog yoga pose. Tick; two nose lengths to spare below the roof. Next, I throw an old-school breakdancing backspin and I don’t even glance the sides (warning: may dramatically and instantly unmake your bed).

Unfortunately, these fully-sick space-proving manoeuvres will do nothing to disperse a claustrophobic’s deeply-held anxieties. A front desk guy tells me later that so far only one person has freaked out and not made it through the evening. Not bad for a 70-pod hotel that has been doing a thriving trade since opening in May.

“But, really, it’s not the kind of place they tend to check into,” the front desk guy adds as if I have no concept of the disorder.

Each capsule is thoroughly air-conned, but there are a handful of safety features that, ironically, could themselves, or in unison, be accidental triggers for a claustrophobic’s unquiet mind: the ‘SOS button’; a flashing red light that looks like it’s been plucked from an ambulance (60 centimetres from your face); and a mini fire extinguisher provocatively baptised the ‘Flame Fighter’. Yep, no reason at all to panic when that door magnetically locks closed.

Visually speaking, the capsules are nerd magnets, with functional-looking indents and angles that gift them a retro spaceship vibe; a cross-breed of the original Stars Wars and Alien sets seems to be the consensus. 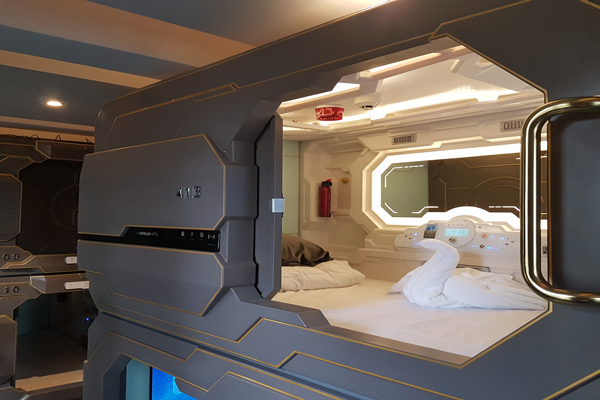 The capsules are decked out in technology that’ll make it hard to leave your little slice of paradise.

The control panel gives you Vader-like power over your space; there’s a USB port, powerpoint, sensor light switches, combination safe, and wide lit-up mirror to help identify formerly unseen wrinkles or just to see how big your pupils are when you run out of things to do.

Other capsule conveniences include an LCD television, recessed behind glass to save space (mine, and a few others on the night, had temporarily lost connection); a detachable table; two (fairly poorly aimed) reading lights; plus a very handy, one-touch sleep button, which shuts everything down with one drowsy swipe.

The fist-thin-mattress is no Cumulonimbus, but it’s not uncomfortable, either. If you don’t get an idyllic eight hours here, it’s probably going to be down to a couple of other factors, anyway. You see, for all their kitschy cred, the capsules are simply snapped and screwed together plastic; stable enough, but far from sound- or lightproof. If you’re a light snoozer, the odd clumsy mount/dismount from a neighbour’s capsule and the late night/early morning George Street ‘ambience’ may be your early wake-up call(s).

In shared areas, however, The Capsule Hotel does the cheery ‘poshtel’ thing rather well (yep, that means shared bathrooms. What did you expect? Bedpans?). It’s fun with a just a hint of the boutique: parquet (look) flooring, chequered kitchen floor and (mostly fake) potted plants dotted around charming retro-look furniture. 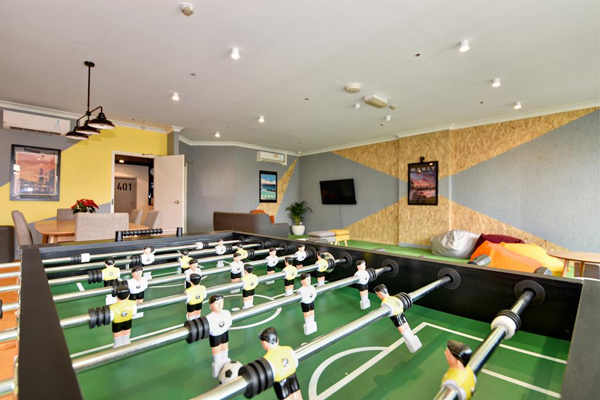 This ‘poshtel’ provides communal areas, play a game of foosball with a mate.

Clever lighting, funky mirrors and bright pastels suggest space where there isn’t much at all, which is fine because most of the hotel’s clientele (a good mix of ages, sexes and nationalities) seem either perpetually getting ready to go out, are out already, or are coming home to crash out after going out.

As for going out, you don’t get too much more ‘downtown Sydney’ than this. Perhaps a shade too much, if – like me – you’re not a diehard fan of the George Street cinema strip.

The level-three hotel sits atop The Century Bar, which thanks to a makeover is no longer one of Sydney’s grittiest (read grottiest) pubs. Nowadays, level one is a decent option for a discreet pre-revel beverage. Ironically, or perhaps deliberately, The Capsule Hotel’s doorbell sounds like a paying-out poker machine on the floor below. 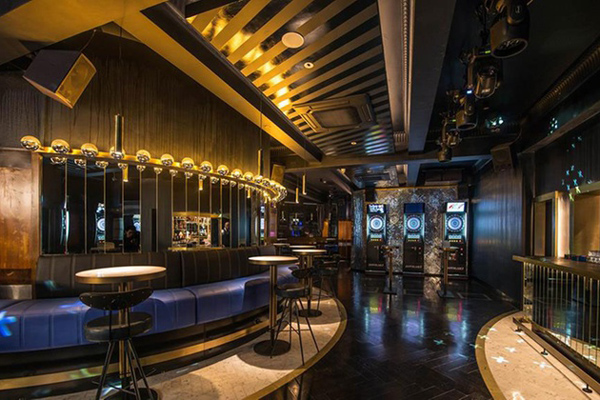 Drop into Century Bar for a quick bevvie.

Speaking of big nights and, yes, we have to talk about this… no, you can’t squeeze two peas into these pods. It’s strictly one person per capsule, even in the deluxe ones. I reckon that’s a good thing; otherwise, this place could turn into a (reasonably priced) one-night-stand drop-in centre.

In the context of a novel concept like this, which is cheaper than an Uber or taxi fare if you live more than about 25 minutes away, it’s difficult to say too many truly hurtful words about The Capsule Hotel. It doesn’t take itself too seriously so neither am I.

You might want to bring some earplugs, though. Lest too many pizza-eating cats get swung around in furious faux anger.

A fun one-off adventure if you need a crash pad or are just curious, as long as your standards are not sky high and you don’t mind sharing loos. Book ahead!

Lots were thrown in for the price including (limited) cooking facilities and wi-fi. While it had the odd blip, the pods, showers and common areas are clean and tidy, especially when compared with some stays in this price range.

The atmosphere feels a little transient, but it’s early days. The key card system is annoying and needs to be fixed – you stand there endlessly swiping. Ask for a bottom capsule if co-ordination is not your forte.

Head to our ultimate travel guide for more details on where to eat and what to do in Sydney. 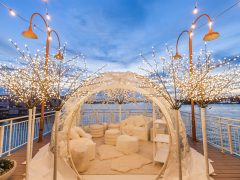 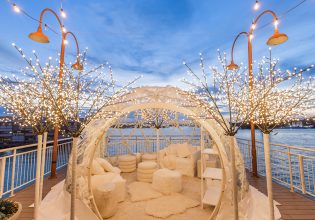