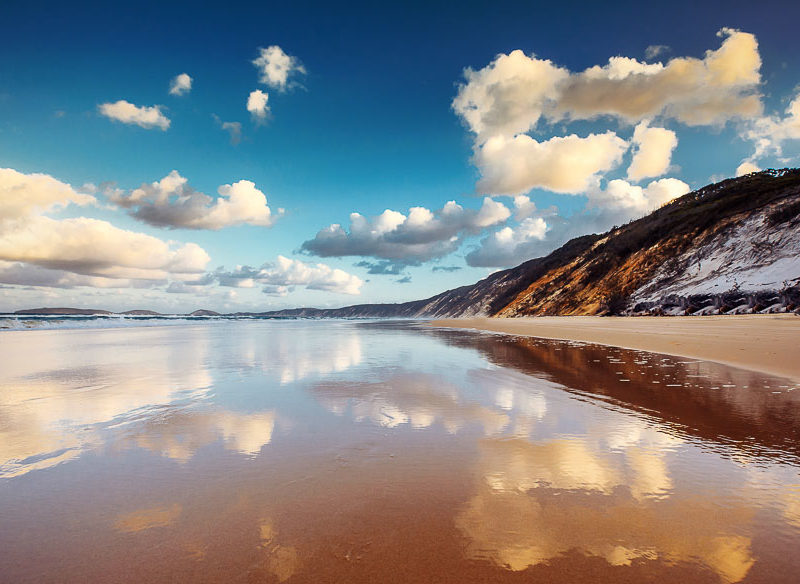 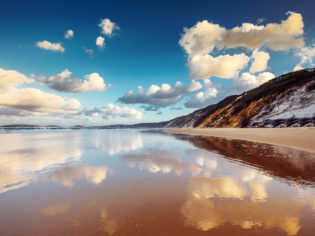 We know that Australians seriously love their road trips, be it on the open tarmac or unsealed red outback dirt. But what about a beach road trip, one where you actually drive on sand basically the whole way? It’s time to road test the Great Beach Drive, from Noosa to Hervey Bay, via the world’s greatest sand island, K’gari (Fraser Island).

Do you have to be a military-grade four-wheel-driver to do this, you ask? Not at all. This is why we sent novice four-wheel-driver Steve Madgwick (with Leigh Counsell navigating). How did they go? Here is the first leg, from Noosa to Rainbow (and here is the second leg… The Great Beach Drive (pt II): K’gari (Fraser Island)

If these guys can do it, well, so can you…

The sourdough my poached eggs sit on is so good it’s about to be stolen. The blue-faced honeyeater swoops at it, a woman’s scream stuns it off course at the death. It’s a healthy, tasty, yet surreal ‘last meal’ at the Aromas Noosa cafe. The cappuccino packs flavour, the banana smoothie is heartily old-school, and the rows of street-facing checked cane chairs lend a serene, continental air to Hastings Street. A sublime way to start a Friday, you would think, but I’m not feeling the Noosa vibe today…

The 15-minute drive from Hastings Street to the eight-car ferry at the wee village of Tewantin (whose name sounds like a question; Tewantin? Sure, why not) offers no clue to the trials and triumphs ahead in the otherworldly-sounding Great Sandy Biosphere. I edge the car on board and a light rain shower lets go. The ferry master notices my face turn a shade-and-a-half paler as he takes the fare. “Be brave,” he says, as I exit.

What the ‘oh, what a feeling’ and ‘go your own way’ 4WD ads on telly don’t show you is the prep work needed to go splashing in muddy puddles. I bend over each tyre for a few minutes at a time, tyre gauge in hand, to deflate the tyres as recommended (more: 15 sand-driving tips you really should know).

My mud-map says take the ‘third cutting’ to access Teewah Beach, which isn’t quite as obvious as the nose on my LandCruiser rental car’s face. I refuse to admit that I’m lost before I’ve begun the Great Beach Drive, so I simply follow a windy ribbon of tarmac around to its natural conclusion; the sand incrementally engulfs it.

Abruptly, asphalt capitulates to a sandy hump. I accelerate and bounce over it (into the Cooloola Recreation Area). The scrubby, marshy growth opens up to Teewah Beach, the bottle green South Pacific winks, longingly. I plough through soft sand, steering wheel ever true, straight towards the ocean, then simply turn left (north). It has begun.

The weird thing about beach driving

The trick is to drive on the hard sand, close to the ocean, but not ‘in the drink’. Submerging your beloved chariot in saltwater for extended periods is equivalent to it smoking two packs a day. Even though it’s a rental, I play by the rules.

Counter intuitively, ‘they’ also tell me, that today’s rain is actually my ally; the moisture firms up even the deepest sand, dramatically reducing my chances of getting bogged. Thank you, rain. On the steel-coloured, mirror-like hard sand, where sky blends with the sea, I hit 30 kilometres per hour, get comfortable, then 40, 50, 60. My confidence rises like the vigorous swell.

I catch sight of a cresting wave out of the corner of my right eye; reflexively, I flinch and pull the wheel just another metre inland (even though the waves break 10 metres out). I play cat and mouse with the rushing water for the next few kilometres to find rhythm. Queensland’s weather parades all its moods in unison. The sea mist lingers, shadowy clouds billow; it feels like I’m on Scotland’s remote west coast for a few moments, before the sun evaporates the mirage.

Spookily, the car’s stereo ‘seek’ function suddenly hones in on Sir Mix-a-Lot’s Baby Got Back, on a random regional station. It reminds me that, as the gull flies, I’m not too far at all from Noosa, Gympie et al.

No permanent buildings of note scar Teewah Beach’s isolated landscape, but it’s never truly deserted either. I pass ankle-deep anglers, often alone, sometimes in twos or threes, conjuring up their tea. Fishermen and fisherwomen, and souls simply looking to flee the ’burbs for a week, maybe even a few, set up camp sites (some are more like camp precincts, clustered in the undergrowth).

Flags identify their loyalties and nationalities. Australian and Queensland Maroons standards proliferate, but among them is a multicultural mix: Greek, Papua New Guinean and pirate banners flap in the breeze, too. The further north, the more the Nation of Bundaberg (rum) takes hold.

An hour’s cruise later, the dramatic, and formerly volcanic, lighthouse-topped Double Island Point draws an impenetrable line on Teewah Beach. The deep, ravenous sands of little Leisha Track is the first real test of my 4WD skills, which really just consist of half-remembered mental notes that mostly escape me when I need them.

I psychologically rehearse the incline; hit it head on, waggle the steering wheel a couple of times when I feel the Prado start to drift. Totally. Under. Control. Well, sort of.

The pot of gold: cliffs and rainbows collide

Leisha deposits me on Double Island Point’s northern side onto, as the name so obviously enunciates, the hyper-colourful Rainbow Beach. The hues don’t get serious on the beach, however, but on the multi-coloured sand cliffs above. Some boffins reckon there are about 70 colours splashed up there, but I swear there are many, many more.

From afar, even in today’s flat light, the fragile cliffs settle into a deep red blush, but the closer I get, the more the rainbow reveals itself; maroons, ochres, mustards. Who knew there were 50 shades of brown as well?

Kilometres of open-mouth gawping later – past the immensity of the Carlo Sand Blow, a huge dune system that extends from the ocean well inland – I reach the innocuous-looking (yet infamous) Mudlo Rocks. This little rock collection on a narrow stretch of sand is the final, seemingly simple step towards the township of Rainbow Beach. Heeding sage advice, I’ve timed my arrival perfectly with low tide. I creep around them with no incident.

A few hours later, at high tide’s peak, Rainbow Beach locals gather at a park above to watch those too-brave and ignorant drivers who try to negotiate their $70,000 4WDs and AWDs past (and often into) the advancing ocean.

Inside the Rainbow Beach Hotel, beer in hand, I stare in wonder at the Mudlo Rocks wall of shame, replete with pictures of drowned and wrecked vehicles that failed to respect the tide. (Check out the ‘Rock Report Rainbow Beach’ Facebook page). Continued below…

Ready to head straight to K’gari? Continue on the Great Beach Drive now

Want to stay a day (or two) in Rainbow Beach? Sandboard the dunes, stroll the rainforest at Poona Lake, or just sample the beach-town culture from yesteryear.

Sand driving tips to save your bacon.