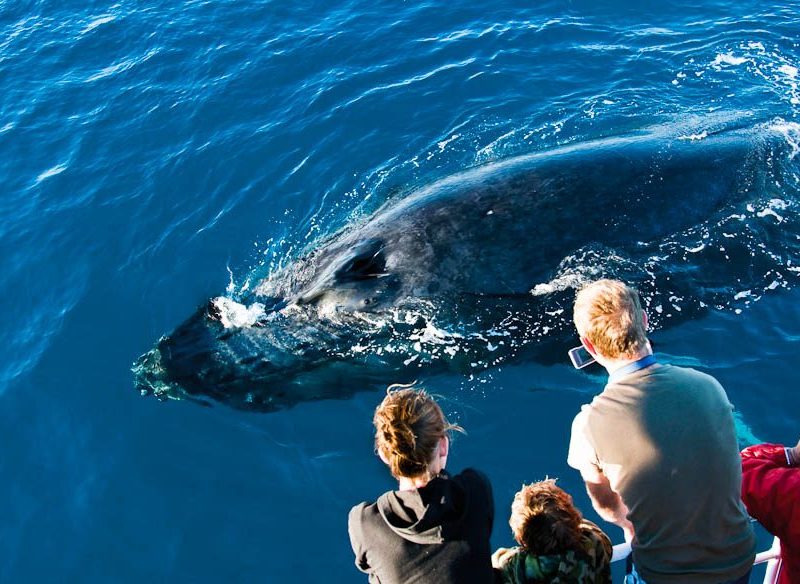 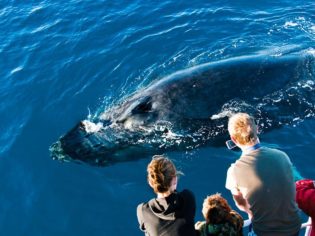 Alissa Jenkins comes face to fin with the most majestic of creatures in Hervey Bay, humpback whales, on one of Queensland’s most majestic stretches of coastline.

You learn this quickly enough on board any whale-watching cruise in Hervey Bay, the so-called whale watching capital of the world. Local marine researchers have discovered that whales are much more likely to coast over and say hello if you shout, jump and cause a commotion because, as naturally inquisitive creatures, the noise piques their interest. (Though, having personally acted out this behaviour, one suspects that they may simply enjoy watching us act like fools.) 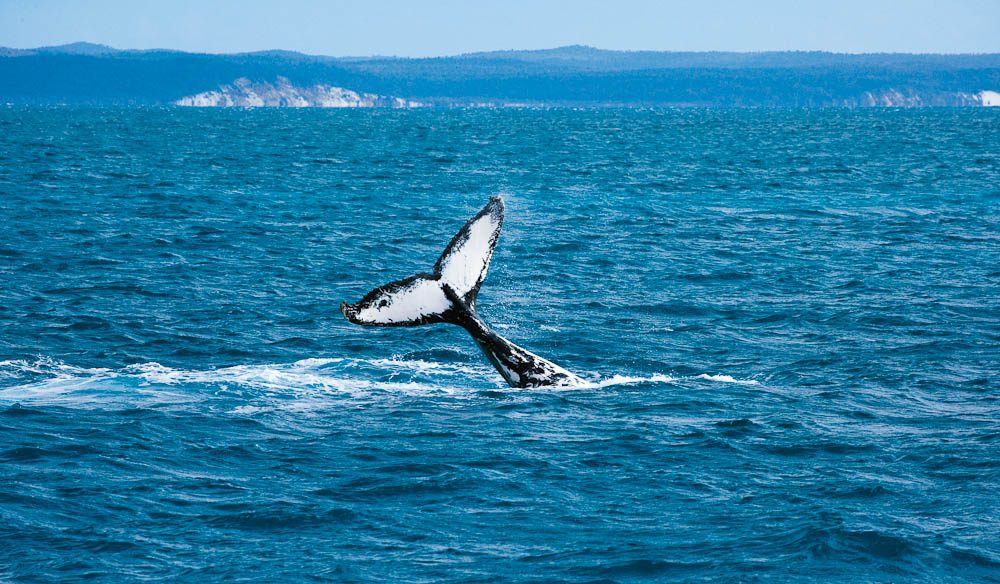 My tour boat doesn’t travel far before a small tangle of tail fins and blowholes appears in the distance, and instructions to begin hooting and waving are issued by our guide. We begin making the required racket and within minutes, three whales are less than 50 metres from the safety rail, lolling around on their sides and eyeballing us; investigating the uproar.

“We’re being ‘mugged’,” says our guide. That’s boat-speak for having a whale approach a vessel, it turns out. She goes on to explain that boats are prohibited from moving when within 100 metres of a whale, “so it’s up to the animal how close it gets.” 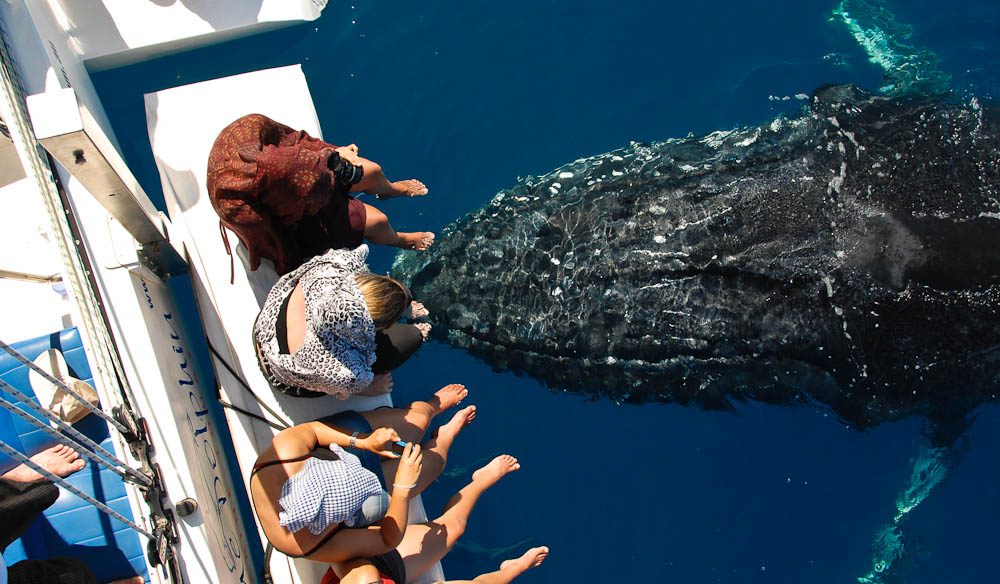 As close as you get: Hervey Bay whale watching

And they don’t get much closer than this, says Andrew Ellis, spokesperson from Pacific Whale Foundation (operators of the cruise I’m on today). In fact, says Ellis, Hervey Bay, situated on Queensland’s Sunshine Coast, is the only place on earth where you’ll find humpback whales who consistently approach boats.

“We have a few theories as to why this is, but I think it’s a combination of their natural curiosity towards all things in their environment, which is something most intelligent species have, and the sheltered water here, which allows for high visibility of vessels,” he says. 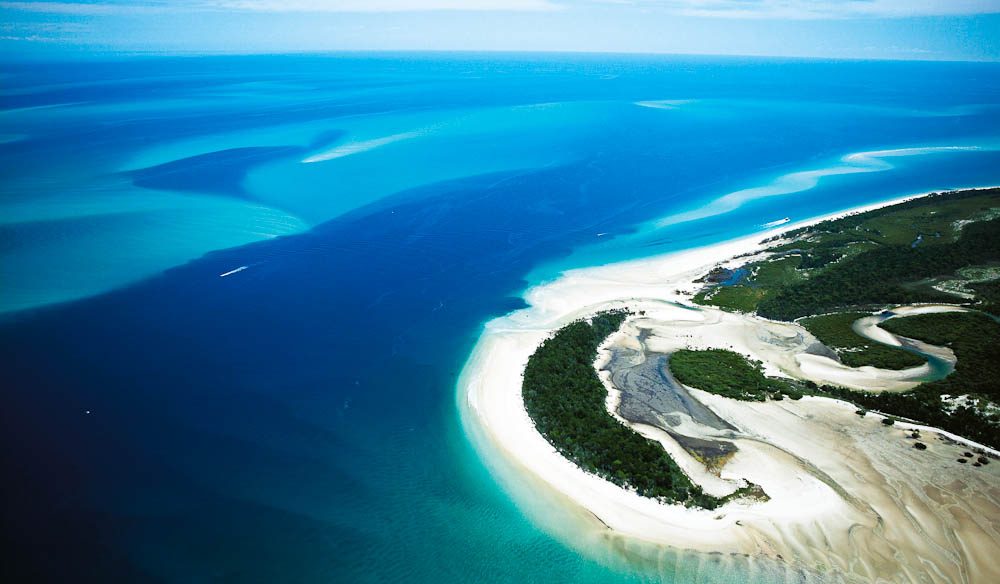 “Birthing season and mating season coincide for humpbacks, so between late July and November we not only see many mothers trying to fatten up their calves, but a lot of  young males looking for a mate,” he says.

With around 10,000 whales stopping off here for a holiday every year on their annual migration back to Antarctic waters, that’s a large concentration of humpbacks in what is quite a small space, he says. “It’s like a nightclub for whales.”

But it’s not just humpbacks arriving in masses each year. Some 55,000 human visitors also flock to the area for their guaranteed glimpse of the action. As a result, whale watching is big business in Hervey Bay, with currently nine operators offering all sorts of whale-based experiences: from high-speed ‘adventures’ to champagne sunset sails and family-friendly cruises for the more leisurely watchers.

Making these varied experiences more memorable is that the whales typically stay for three or four days before continuing south, giving watchers a chance to see them exhibit their personalities, rather than watching them speed by from afar.

Among the 25-plus whales we see today are a few lone souls roaming Great Sandy Strait looking for a date. We also spot a mother and calf – but mum isn’t too keen to let the curious youngster close to the action for long, and they zoom off.

Next, a gang of three adolescents show up, to show off their tricks. As they approach the vessel – fin-flapping, lobtailing and spyhopping (head up, tail down, like a reverse handstand) – passengers fumble with cameras, racing from one side of the deck to the other, while others pause to take in the sheer grandeur of these creatures.

At 40 tonnes fully-grown (the rough equivalent of 25 Holden Commodores), they’re bigger than you can fully appreciate until they’re in front of you – but it’s even more profound knowing they’ve arrived on their own accord. 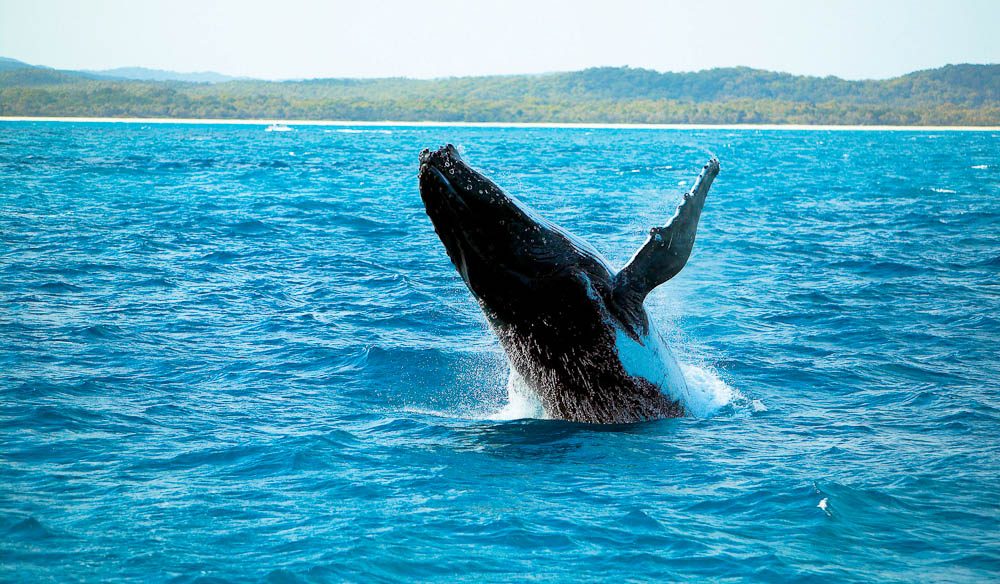 “Most of these whales were born after widespread hunting was banned, so they don’t see humans as a source of fear, but one of genuine curiosity,” says Ellis. “They’re used to seeing boats and people waving here, and the younger generations are the most curious because they know no fear.”

In other words, these whales are genuinely as eager to meet us, as we are to meet them.

“When whale-watching first started here 20 years ago, we were lucky to get maybe six muggings a season. Nowadays, muggings happen every day of the season, and the population is increasing at approximately 11 per cent so whale watching experiences are just getting better and better.”

As the whale population grows, so too do the number of recognisable pod members here – a testament to conservation efforts in recent years. Among the more well-known visitors is the infamous Migaloo, the only documented white humpback in the world, who makes headlines wherever he’s spotted. It’s been several years since Migaloo was last seen in Hervey Bay, but Ellis puts this down to Migaloo’s preference to stay out of the limelight, preferring to stay on the northern outskirts of Great Sandy Strait when visiting, where few whale-watching tours reach.

Even if you don’t spot a celebrity whale, chances are you’ll hear about one – the locals have all kinds of whale tales. Peter Lynch, skipper of Blue Dolphin Tours, has a couple of stand-outs.
“On a few occasions, we’ve had a mature male humpback sitting under the vessel and then start singing out to a nearby female,” he says.

“And when he hits those deep notes, given they’re such large animals, it vibrates right through the boat and makes all the fittings shimmer.”

However, his most treasured whale memory occurred three seasons ago, when a young female humpback took a particular interest in their small catamaran.

“She stayed, swimming around us for over three hours,” he reminisces. 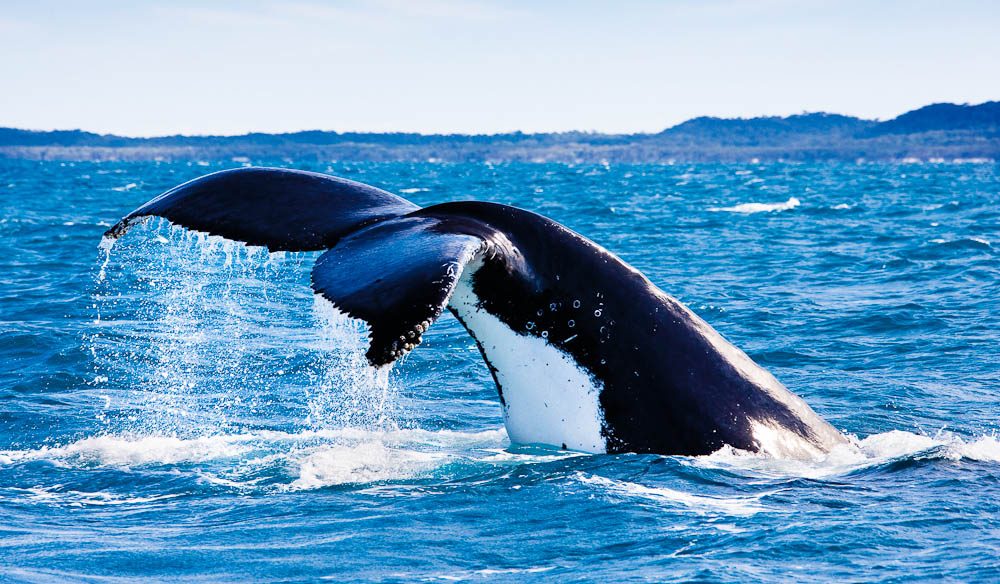 “She’d touch the boat, bounce the hydrophone off her back and when a couple of our passengers were sitting on the back platform with their feet dangling in the water, she came up and tried to touch them. When she surfaced, she blew a great blast of water into our faces.

“Of course we laughed and she got such a reaction, she did it again,” he adds.

“That’s what’s so special about it, you get these interactions where we’re not feeding or touching or doing anything to the whales, they’re in fact trying to engage us.”

And engage they do. The highlight comes at the end of our four-hour morning cruise as the teenaged trio draw closer and closer to the safety rail. Then, amidst the camera flashes and cheers, we all stop, and gasp. Just mere metres from the bowsprit, a young female erupts out of the water, executing a perfected spyhop that no Russian gymnast could rival.

Her slick black sides glisten in the sun, and we watch her watching us. It’s a moment before she sinks back under the water, but a magical moment at that. And encouraged by
our ooohs and ahhhhs, she performs a few encores, before calling it a day.

A day of people-watching.

Getting there: Hervey Bay 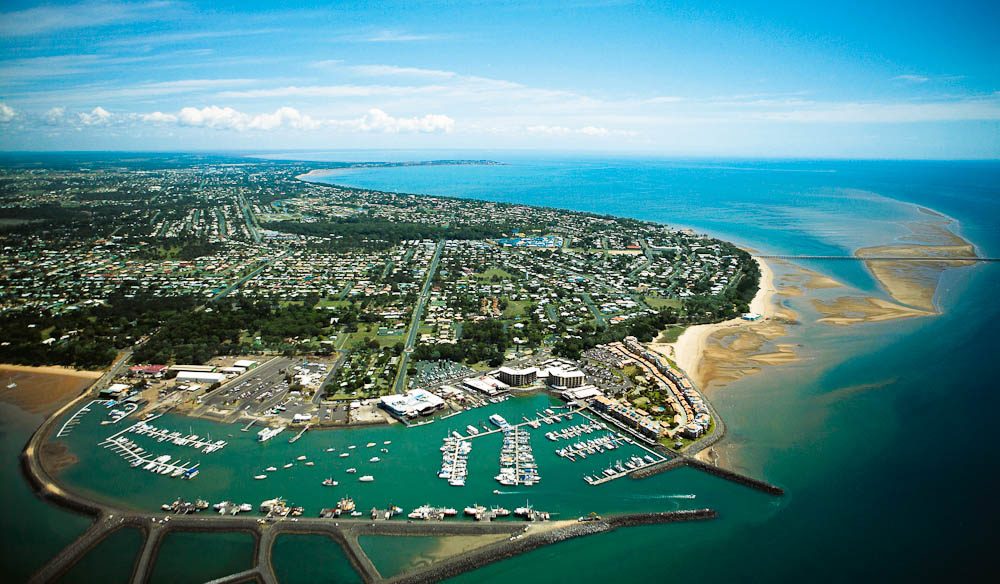 Or for a more boutique experience, Villa Cavour Bed & Breakfast is beautiful, homely and close to the Esplanade. Hosts Mara and chef Rocco also run popular Italian cooking classes. Rooms from $150 per night, including breakfast for two, villacavour.com.au

• Whale watching season generally runs from July to November in Hervey Bay. You can also expect to see dolphins, turtles and dugongs while you’re here.

• Costs vary according to tour guides. High-energy, three-hour catamaran tours with That’s Awesome are priced from $110 per adult, or $330 for a family ticket. All-day adventures with Blue Dolphin Tours start from $120 per adult or $370 for two adults and two children. For more family-friendly experiences, Pacific Whale Foundation offers eco tours run by certified marine naturalists and researchers. Expect expert explanations on board, as well as a Junior Naturalist program for kids. Sightings are guaranteed or you go again free. Prices from $85 per adult and $230 for family rates.