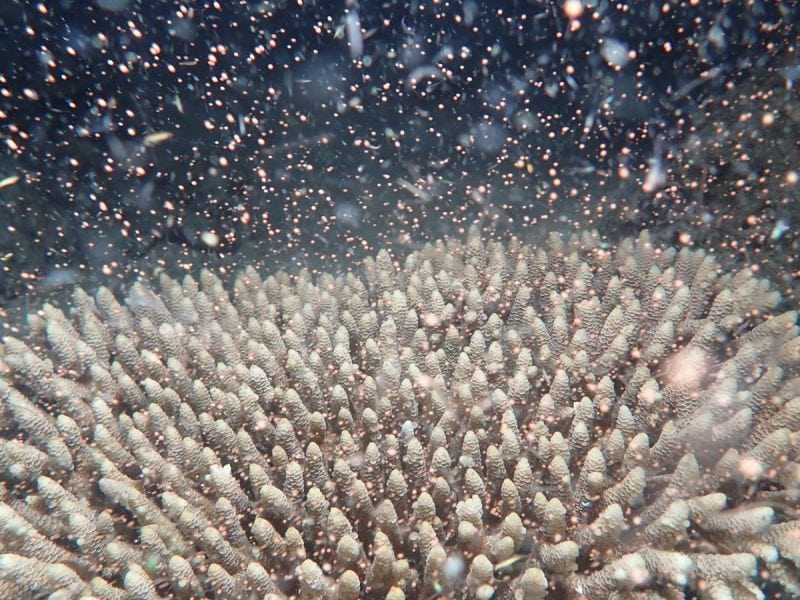 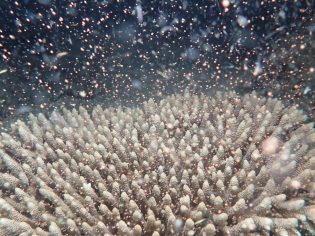 A cruise in the dead of night offers up the perfect opportunity to witness the wonder of nature in all its kinky glory.

The Great Barrier Reef’s annual mass coral spawning has been called the biggest sexual event on the planet – and even the world’s biggest orgasm on the world’s biggest organism. Over two or three nights at various times between October and December, the waters of individual reefs across the 2300-kilometre Great Barrier Reef suddenly burst with new life – countless egg and sperm bundles released simultaneously by billions of coral polyps in a spectacular explosion of synchronous breeding. 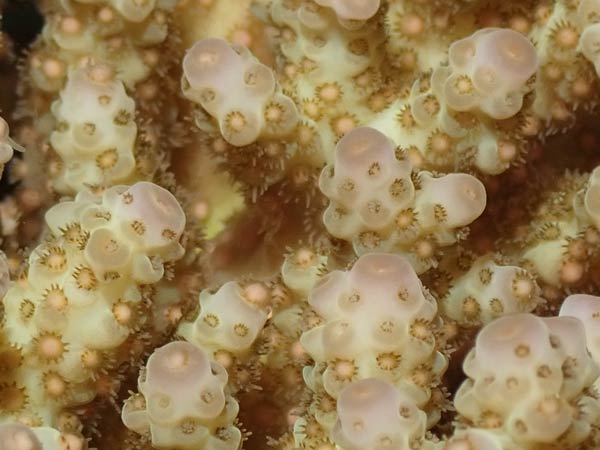 Looking like a blizzard of tiny snowdrops, they bubble to the surface over a few nocturnal hours and form a pungent, pinkish slick. Splitting apart, the egg and sperm bundles fertilise en masse. The result: billions of pinprick-sized coral larvae, which a few days later settle back down on the reef to begin their life’s work of reef-building. Remarkably, this vast, vital aspect of coral life was unknown until 1981, when Australian scientists observed it on the Great Barrier Reef off Townsville.

Forty years later, with mass coral bleaching due to climate change and escalating existential threat, spawning seems a mighty and cheering demonstration of Reef resilience. It’s also emerging as a potential means of safeguarding the future: scientists now use the yearly boom to scoop up millions of healthy newborn corals for resettlement in bleach-depleted areas. 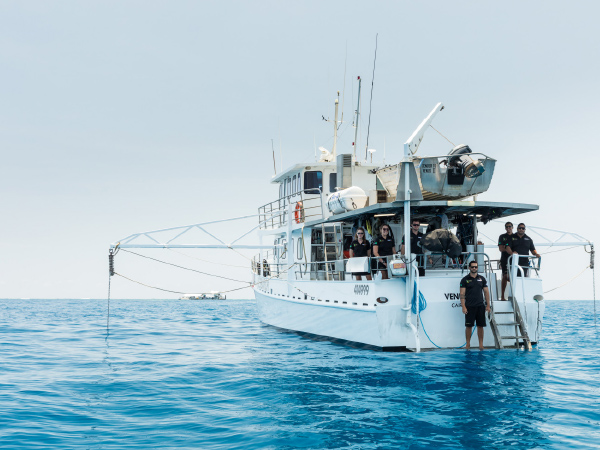 A control vessel monitors the waters during the coral spawning off the coast of Cairns.

A greater goal – to help coral fight deadly bleaching – also harnesses spawn power. Almost all corals keep algae in their tissue to supply vital nutrients. In overheated conditions they lose it and begin to starve – and bleach. During last year’s spawning, the Larval Restoration project mixed large volumes of coral larvae on a Cairns reef with more heat-tolerant algae, enhancing their ability to resist bleaching. Also, supplying algae so early in the life cycle (before it is naturally acquired) speeds growth, boosts health and improves survival chances.

Time to check out chapter one of that life cycle. Donning scuba gear – though plenty onboard choose to snorkel shallower parts instead – we descend into 10 metres of seawater, shadows and coral, lit only by the bright moon and our dive leader’s soft but wide-ranging torchlight. Visibility is excellent; there’s no chance of being lost in the night. 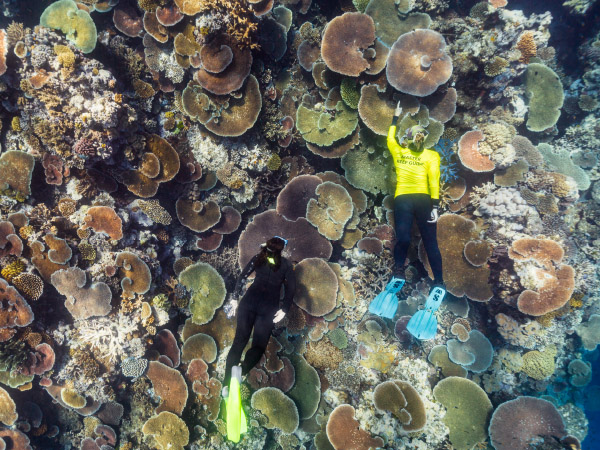 Duck diving on Moore Reef during its November 2019 coral spawning.

A spectacularly flame-patterned eel, thicker than an arm, slithers from its hole in a reef outcrop. A two-metre-long grey reef shark suddenly looms from the blackness and shoots along the sandy channel beside us, dwarfing two whitetip reef sharks alongside it. None pay us any attention; they’re on secret shark business. A trio of giant trevally are more interested, lurking just inside our beam, as if hoping we’ll light the way to prey.

For all these enchantments, the first dive ends with no spawning. We’re a tad early, it seems, but Mother Nature doesn’t publish timetables. Back on the boat, our surface interval passes with a welcome cooked dinner. And then, during the second (10pm) dive, it happens. A broad patch of coral, carpeted by white blobs, is brewing something marvellous. Suddenly we’re inside a snowdome. Rising above the coral are myriad snowy dots, shimmering as they flutter and fly before our eyes. Some seem to shine with an inner light. Against the inky backdrop of the night sea, they could almost be stars or meteors. 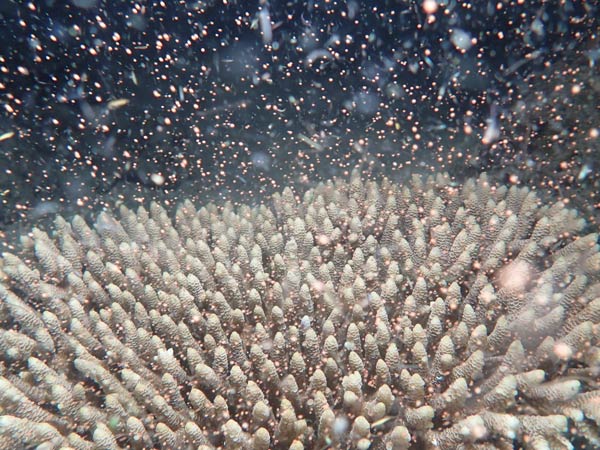 You might think, ‘eeeww, swimming in sperm, no thanks’ – but it’s not like that at all. To hover weightless in the sea while meeting the first flakes of an underwater, upside-down snowstorm at night is a moment of pure wonder and magic. It feels like seeing Santa actually land his sleigh on the roof. 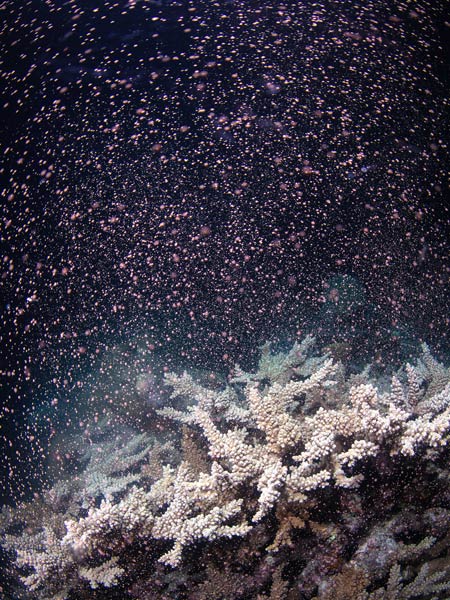 The extraordinary event gives the impression of being inside a snowdome. (Image: Gareth Phillips/Reef Teach)

But there’s also a grounding reality amid the sense of unreality, and that feels special too. It’s an intimate encounter with life’s grandeur, with that fundamental, never-say-die impulse to propagate that keeps the primordial cycle going. This is literal immersion in the miracle of life itself, this private moment between me and coral, silent but for my bubbling breath.

We’re not back in Cairns until almost 1am. The cabin lights are out and we’re dozing in the dark, the other voyeurs and me. Midnight has passed and it’s been such a magical night I wonder that the boat hasn’t turned back into a pumpkin. Cinderella went to the ball, and I’ve seen coral spawning. 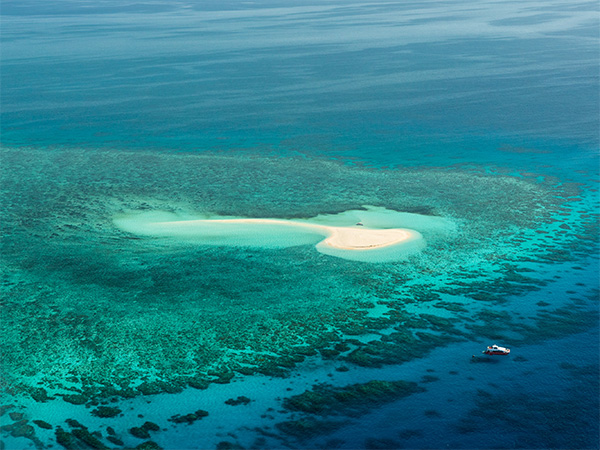 Getting there
The Cairns marina is located within walking distance of most centrally located hotels.

Playing there
Spawning on Cairns’ reefs is usually within a week of the November full moon. Book here

Staying there
The design-focused Bailey in central Cairns is a great option. 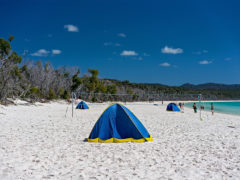 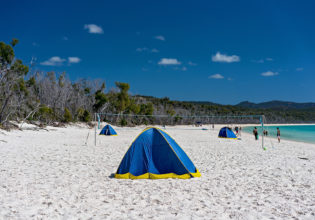 The most incredible campsites near the Great Barrier Reef

There are a plethora of ways to experience the Great Barrier Reef, but for a completely unique experience don't pass up the chance to camp alongside i... 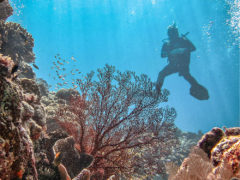 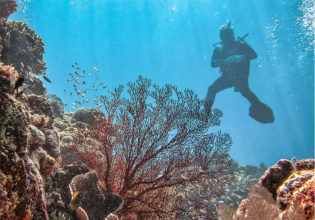 The best diving and snorkelling sites on the Great Barrier Reef

One of the seven wonders of the natural world, the Great Barrier Reef is a magnet for tourists and locals and for a few very good reasons. With warm ... 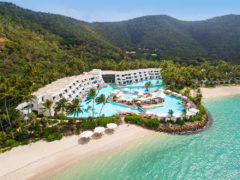 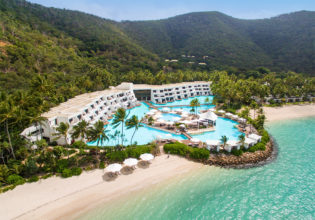 The best places to stay on the Great Barrier Reef

If you’d like to get as close to the Great Barrier Reef as possible, you’re going to need somewhere to stay. Right? Listing all of the incredible... 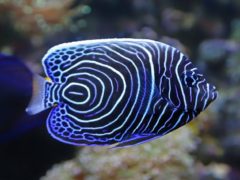 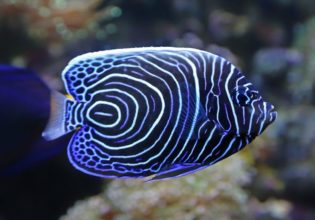 With some of the planet’s best scuba diving spots, the Great Barrier Reef is a natural playground in our own backyard waiting to be explored, and th...