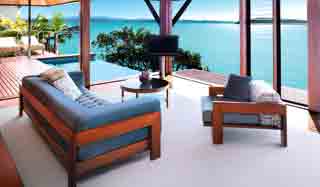 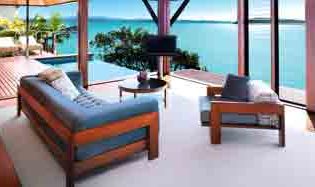 We countdown the ultimate Australian destinations where you can really unwind and indulge – #5 Qualia, Hamilton Island, QLD

Qualia is one of the largest luxury lodges in Australia. If every bed were occupied by a couple, the entire resort would accommodate 122 people (there are 33 Leeward Pavilions, 26 Windward Pavilions and 1 Beach House, which can sleep 4).

A gated resort community comprising a series of immaculately presented, thoughtfully designed pavilions that feel more like luxe beachside homes than hotel rooms. All pavilions feature floor-to-ceiling windows that take in glorious views across the Whitsundays, all have private sundecks, sublimely comfy king-sized beds, huge bathrooms with separate tubs and showers, comfortable down-filled sofas and large-format natural stone flooring in the bathrooms, which is a joy to walk on in bare feet. If you can drag yourself out of your pavilion, the wider world of the resort isn’t bad either. The main pool area feels quite private as far as resorts go because it’s in a sheltered nook at the base of a cliff, and is oriented towards the vast, sparkling turquoise Coral Sea. The main lodge (or ‘Long Pavilion’) houses a library, the restaurant and guest services, and is a relaxing place to unwind while pretending to mingle. It also features an impressive wrap-around lap pool (although it was more like a lolling pool when I was there). The restaurant is lovely and resort staff are incredibly welcoming and attentive (eg. when they heard I was allergic to wine, they quietly and without fuss swapped my complimentary Champagne for a bottle of Belvedere vodka – now that’s service. Usually I miss out on the fun stuff).

There’s a fantastic feeling of being looked after here. You’re even given the keys to your own golf buggy on arrival so you can navigate the steep, hillside resort (from pool to restaurant to spa to your villa) without breaking a sweat – or going over 20km/h. Come to think of it, it’s a little like a retirement village for the rich and famous. Which isn’t a bad thing when you feel like a break.

Most affordable room: Leeward Pavilions are priced from $950 per night low season (April 1 to Dec 11 and Jan 5 to March 31) and $1150 high season. That rate includes breakfast, all non-alcoholic beverages, use of a two-seater golf buggy, chauffeur service, return airport transfers and use of non-motorised watercraft. Rooms are 90 square metres and include a comfortable (not squished) lounge area.

Best room in the house: If you’re at qualia to celebrate a special occasion, it’s worth splashing out on a Windward Pavilion, priced from $1500 per night (breakfast only) in low season (from $1750 with dinner and breakfast included). You pay an extra $500 or so a night for its northerly aspect and private infinity-edged plunge pool. Suites are 120 square metres and have separate bedrooms. But the absolute best “room” here is the Beach House, a secluded pavilion set well away from the other accommodation, which features a 12-metre-long lap pool, king bedroom with walk-in robe and separate guesthouse. Priced from $3000 per night (low season, breakfast only).

You’d be hard-pressed to find a better calendar of special events at any resort in the world. Annually, qualia hosts Pas de Deux in Paradise (an intimate outdoor performance staged by the Australian Ballet, followed by a dinner where you can dine with the dancers), and the Great Barrier Feast series of events (where notable guest chefs such as Peter Gilmore from Quay, Dan Hunter from the Royal Mail and Frank Camorra from MoVida conduct showcase dinners and master classes). There are also special sidebar events scheduled around Hamilton Island Race Week, including celebrity dinners and fashion parades (Collette Dinnigan designed the resort’s beach towels).

There are many great personalised activities that can be organised by qualia, but most of them cost extra. For example you can be dropped off at a secluded beach on Henning Island with nothing but your partner, a picnic lunch and snorkelling gear, then arrange to be picked up again a couple of hours later (drop-offs and pick-ups are included in your tariff; picnic hampers cost from $40). Or you could take a 3.5-hour cruise out to Whitehaven Beach on qualia’s exclusive Atomic cruiser (from $250pp, minimum four guests). Golfers with cash to burn can take a scenic helicopter transfer to Hamilton Island Golf Club (which is actually on nearby Dent Island), one of the trickiest and most picturesque courses in the world. Costs from $299 for return flights plus 18 holes, or $239 for a flight with return cruise option back to Hamilton Island. The caddy is $50 per hour for a normal staff member or $90 per hour for the pro to caddy.

The resort caters for guests 16 years and over, which is great if you don’t have kids or need a holiday to have a break from your kids. It’s not so great if you’re after a family holiday, but then there are plenty of other family holiday options in the Whitsundays. Besides, it’s a hardline policy like this that makes qualia so, well, peaceful.

Even though qualia is undeniably a luxury experience, you can choose from a range of packages so you can manage your expenses. Breakfast-only packages are most affordable (when I stayed at qualia I went into town one night and ordered a pizza to save money) but you can choose all sorts of other combinations, including a special honeymoon offer, from $5700 twin-share in a Leeward Pavilion (you pay for six nights, and get the seventh free; included is a sunset cruise on a 45-foot cruiser and a private poolside dinner for two).

It’s the perfect place for a DIY wellbeing retreat. There’s a waterfront gym, personal trainers, an open-sided yoga pavilion, kayaks, bushwalking tracks and tennis courts. All this makes qualia perfect for a girlie getaway, a solo traveller on stress leave or someone craving post-divorce me-time (that may sound like a bit of a downer but my point is that qualia isn’t all-pervadingly couply like some island resorts – you wouldn’t feel out of place here if you came alone). If you really want to make yourself feel good, check out the boutique. Some of the prices are a little scary, but it’s such a beautifully collated collection of designer clothing (think labels such as Prada, Balenciaga etc) and accessories that it’s fun to just go in there and dream.

If you arrive at qualia expecting to sink your toes into the lovely white-sand beaches of the Whitsundays, you’ll be happy to know the waterfront here is has a nice thick border of the stuff. However, I don’t know too many people who are tempted to swim in the water out the front of the resort. It’s more a beach you’d like to kayak from than swim in. I’d much prefer hanging out on a Windward Pavilion’s sundeck and going for the occasional splash in the plunge pool.

It can be quite an ordeal to drive your buggy into “town”. I know if you’re staying in a luxury lodge there’s usually no real reason to leave, but it would be a shame to be on Hamilton Island and not visit the impressive architecturally designed Hamilton Island Yacht Club. This sculptural, copper-roofed Walter Barda-designed building has a balmy outdoor bar and fantastic restaurant. But alas, the trip down there is hair-raising. Suddenly, your little plastic-flap-sided speed-limited mobile is on real roads, shared by real traffic – minivans being your main concern. It’s even hairier at night thanks to lots of potholes, weak headlights and a lack of street lights. Luckily, you can ask for a chauffeur to take you instead.

Chef Jane-Therese Mulry doesn’t mind sharing her kitchen, so during the Great Barrier Feast you’ll get to experience food from the best chefs in Australia. Jane’s pretty good, too. An Aussie in London, she worked with Marco Pierre White at Quo Vadis, The Mirabelle and Titanic, and became Marco’s first female head chef at MPW Canary Wharf. She also worked in some of South Africa’s best restaurants before settling back in Australia in 2006, where she was executive chef at Cradle Mountain Lodge before being head-hunted by qualia in 2008. She prides herself on simple, modern food that’s beautifully presented and loves using fresh local produce. The kitchen offers culinary tastings and classes for guests, such as talking through pairings such as sake and sashimi, Champagne and oysters, and wine and cheese.