Where to find the best waterfalls on the Sunshine Coast 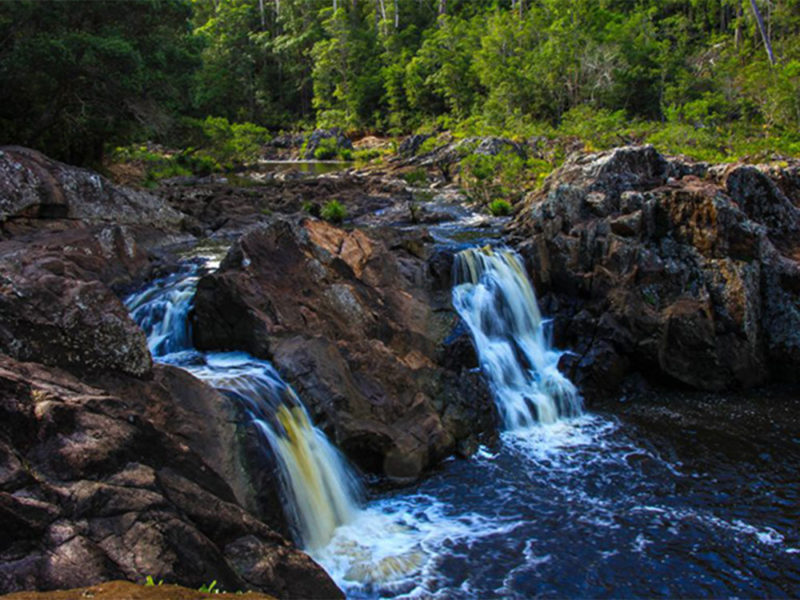 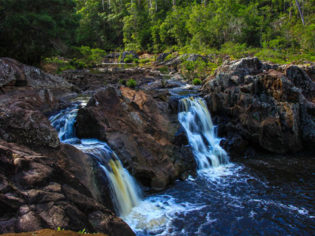 You’d be forgiven for thinking the Sunshine Coast is just one long stretch of sand, but if you reset your course inland there is a treasure trove of waterfalls and nature trails to be discovered.

Caloundra, Noosa, Maroochydore – these coastal gems may be the beating heart of the region, but they’re not the only places worth discovering while you’re on the Sunshine Coast. Those who venture inland toward lush green forests and towering gum trees of the hinterland will be rewarded with some of Queensland’s most scenic waterfalls. Here is where to find them.

Spend a heavenly summer’s day cooling off in the crystal-clear rock pools underneath Gardners Falls near Maleny. Park your car on the banks of Obi Obi Creek and take the trail downstream to reach the falls. You’ll pass a number of shallow rock pools (an ideal spot for a low-maintenance swim with small children) as you get closer to the falls, the pools increase in size until you reach the main attraction: Gardners Falls.

You can also swing from one of the ropes tied to the towering trees that line the banks of the swimming hole into the water when it is deep enough. Or pick a grassy spot to enjoy a picnic followed by a doze in the sun before you make your way back past the giant water gum trees to your car.

The Kondalilla Falls are located on the traditional land of the Gubbi Gubbi people in Kondalilla National Park. Its name, which means ‘rushing water’ in the local Aboriginal language, reflects exactly what you can expect from the falls during the summer wet season. The 80-metre waterfall is one of the most accessible falls to visit in the region and the well-maintained paths also make it a great family-friendly option.

Take the paved track from the picnic area and turn left to swim in the freshwater rock pool at the top of the falls or turn right to continue further down to the bottom of the falls to admire the sight from the rock pool below before you loop back around and up to the top.

There are three main bush walks within the park that range from 45 minutes to three hours in duration with plenty of birdwatching opportunities to be had along the way (there are over 107 different species of birds in the park), you’ll also spot frogs, wallabies, and – if you’re lucky – the shy platypus. 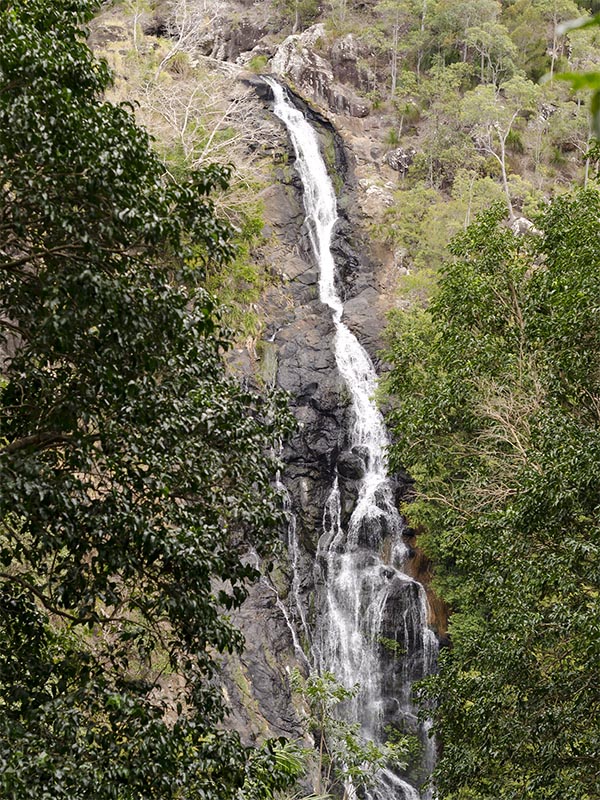 Buderim Falls, also called Serenity Falls, is a 45-hectare haven located less than a kilometre from the north side of Buderim village on the Sunshine Coast. Its proximity to the township makes it one of the most popular spots on the list – but don’t let the possibility of crowds put you off. The shallow waterhole beneath the falls is deep enough to float in after a decent rainfall and it is one of the prettiest in the region.

Access the waterfall via one of two paths: Harry’s Lane off Lindsey Road, which will take you to the bottom of the falls; or Quorn Close, which leads to an arch bridge that overlooks the falls from above. Both vary by way of incline and distance, but each option succeeds in providing a beautiful bushwalk through Buderim Mountain’s tranquil playground.

Find Booloumba Falls tucked away within the spectacularly beautiful Conondale National Park – think lush rainforest, towering eucalypt trees and inviting creeks. Its collection of rock pools, which are filled with crystal-clear water, offer some of the best wild swimming options in the area; the deepest pool is found at the top section of the falls, a plunge pool above the falls and another rock pool at the bottom of the falls.

Accessing the falls will require an easy three-kilometre two-hour return walk. Be sure to stop at the junction of Peters and Booloumba creeks along the trail to admire the impressive Breadknife rock formation and the lookout over the cascades, rock pools and falls at the Booloumba Gorge on your way to the base of the falls.

A high clearance 4WD vehicle is recommended for driving in Conondale National Park as the roads are unpaved but gravel covered and there are also several creek crossings along Booloumba Creek Road. 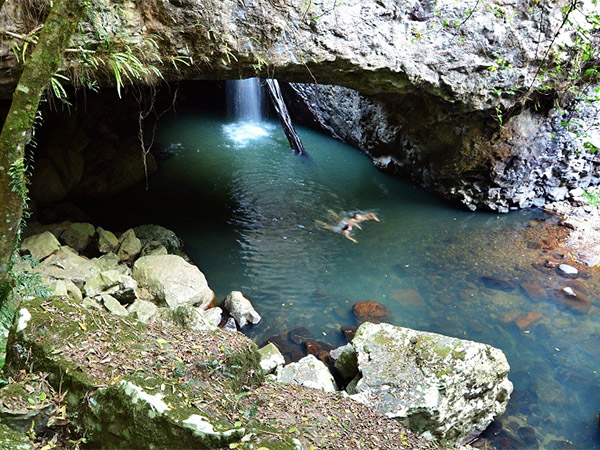 Booloumba Falls are tucked away in Conondale National Park

Swimming holes don’t come more picturesque than the rock-bordered pool at Wappa Falls on the Maroochy River. While away the day sunbathing on the rocks, dipping in and out of the pools and listening to the gentle rush of water from the modest waterfall.

Head north along Pump Station Road to reach the carpark of the falls. From here it is a short stroll to the falls. Alternatively, if you’re nearby at Wappa Park there is also a short bush walk that leads to this popular swimming spot – you’ll find plenty of locals lapping up the water and sun on the weekends. 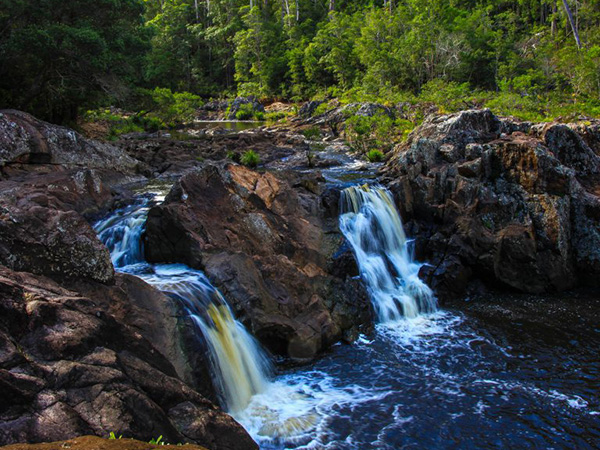 The rock-bordered pool at Wappa Falls

We hope we don’t get any locals coming after us for adding Robinson Falls to the list – considering how few people know that this slice of paradise exists. The falls are found at the end of Waterfall Road (your first hint), just off Mapleton Road, and directly opposite Nambour General Hospital. The spot is named after brothers Edmund and Arthur Robinson – two early colonisers of the area.

The waterfall is hidden within the Cilento Bushland Conservation Reserve, a 10.5-hectare haven which houses a grassy park area, children’s playground, toilet facilities and a barbeque. Take the short loop trail to the left of the park through the bush to reach the top of the waterfall before following it down to the waterhole at the base of the waterfall. 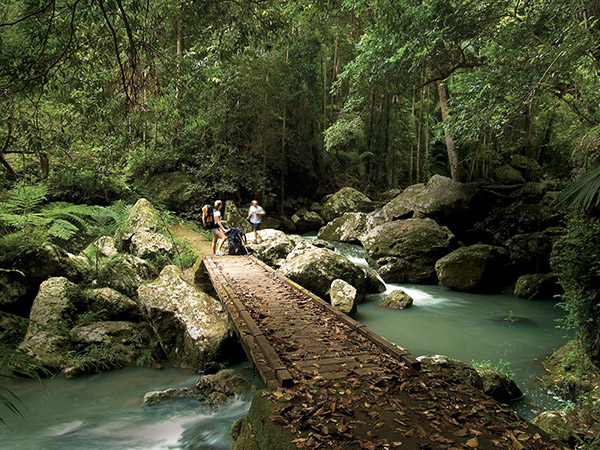 Robinson Falls is a local favourite 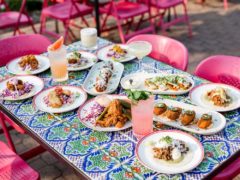 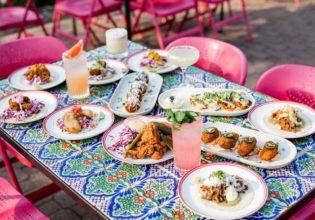 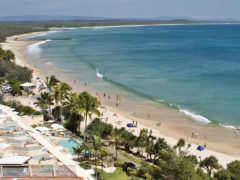 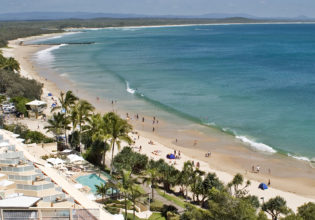 Where to eat, stay, and play in Noosa

It’s the chic, food lover’s pearl of the Sunshine Coast, and there’s a reason Noosa keeps us coming back for more… It had been 12 years since... 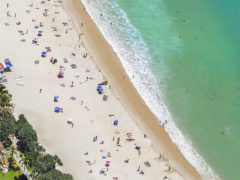 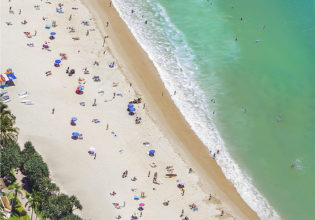 The 12 best things to do in Noosa with kids

This Sunshine Coast holiday favourite is known for its picturesque coastline, sophisticated dining and chic shopping but it’s also brimming with kid... 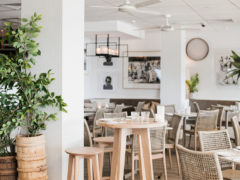 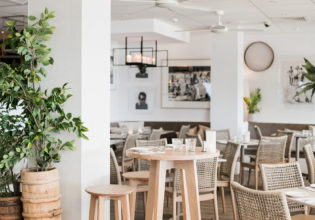 The best places to eat on the Sunshine Coast

Don’t let the pristine beaches and warm sunshine distract you. The Sunshine Coast is home to some of Australia’s best restaurants and cafes. And t... 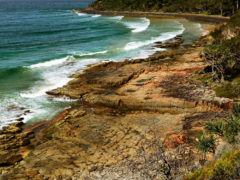 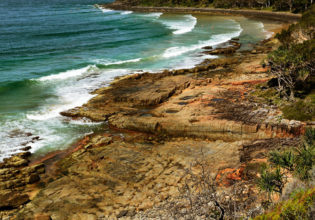 The best beaches on the Sunshine Coast

Planning a trip to Queensland’s Sunshine Coast? Explore an abundance of beautiful beaches and discover their best-kept secrets. Spanning around 60 ...