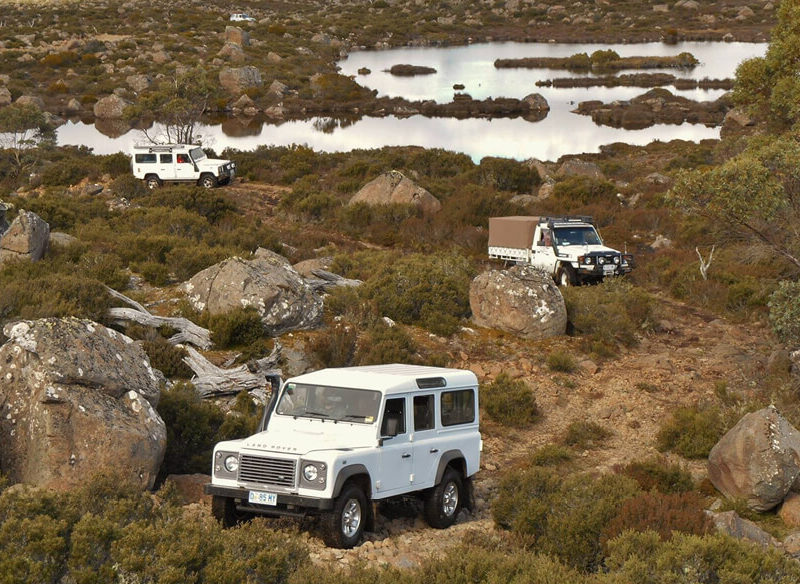 A former Antarctic expedition training facility is the perfect place from which to explore a unique portion of Tasmania.

When Buzz Aldrin stepped onto the surface of the moon and gazed across its stark surface, he couldn’t help but put his emotions into words. “Magnificent desolation,” he exclaimed, in some ways eclipsing Armstrong’s famous first words. It’s a little how I feel gazing back at Thousand Lakes Wilderness Lodge – a tiny speck of white on the horizon, at the end of a vast expanse. There must be a fair few kilometres of wind-blasted tundra between our position and the lodge’s comforts, and no paths to lead us there.

Indeed, it was precisely these isolated, moon-like conditions that made the Central Highlands perfect for an Antarctic research base here in the ’80s. The Bernacchi Lodge, as it was called, had to bow to its harsh environment, its roof angled to deflect savage winds hurtling across snow-covered tundra.

Abandoned to the elements in 1999, it was eventually bought by V8 Supercar racing star Marcos Ambrose, who relaunched it as Thousand Lakes Lodge last year as a base for anglers and walkers. As soon as my wife and I arrive, Marcos, who happens to be visiting with his family, tells us to get out there and explore, handing us maps of the region that look like the pockmarked surface of the moon owing to the thousand or so lakes that give the lodge its name.

Fortunately, the conditions are far from Arctic during our stay, and we’ve timed our arrival perfectly to coincide with the transformation of the scrub into a sea of wildflowers, their scent filling the air. The lodge’s strange angles mean the majority of the structure is given over to a cavernous lounge and dining area, with leather sofas positioned in front of an immense fireplace; another lounge with board games and something of a library, and a more intimate dining room is found off a corridor.

Everywhere you go, big windows frame what this place is all about: Tasmania’s famous wilderness. Here, you’re always in the wild surrounds, whether you’re inside the lodge gazing out or miles away gazing back across the bogs, lakes and heathland.

When you are back, it’s eminently comfortable; a rain shower is the ideal antidote for tired legs following a lengthy bushwalk, as is a Nant Estate whisky, from down the road, in front of the fire in the lounge. Corridors are adorned with photos of anglers waist-deep in one of the many lakes, and you can sink into a sofa to admire the photos in books such as Tasmanian High Country Huts (some of which you can hike to from the lodge).

The rooms are functional and modern, if a little box-like – perhaps betraying the building’s former life as a training base – but the draw of the communal spaces means your room simply fulfils its role as a place to change, shower and sleep.

Such is the beauty of the Central Plateau, with different heathers, mosses and wildflowers delivering a surprising amount of colour in the summer months, that you’ll spend most of your time outdoors, coming close to wallabies in the heath and black swans on the lakes. A member of staff will prepare a picnic lunch for you, and you can borrow gear from the lodge – gaiters (shin guards) are a must if you’re going bushwhacking.

When you return, the chef (now Phil Kelly from gourmet deli Wursthaus Kitchen) will be ready to take your order – roast Tasmanian lamb or fresh-caught trout perhaps – before host Jason gives you an impromptu after-dinner performance on his circular didgeridoo (a spiral-shaped instrument carved from a single piece of wood). Before bed you can take a torch out to nearby Lake Augusta and look for platypus, as wombats graze on the banks around you.

There aren’t many places in the modern world where you can experience something akin to Aldrin’s ‘magnificent desolation’, where you’ll feel how small you really are in nature’s grand scheme, but down here in Tasmania, in the otherworldly landscape of the Central Plateau, you can come pretty close.

Verdict: A comfortable, cosy base from which to head out and explore the stark beauty of the Central Plateau; a great place to return for dinner, having worked up an appetite on a full-day bushwalk.

We rated: The location of this lodge is unique – an island of civilisation in the middle of nowhere. If you’re looking for a cosy refuge from Tasmania’s often harsh elements
in front of a roaring fire, this is it.

We’d change: The rooms are just a little bit functional – lacking the warm feeling of the lounges.

Notes: We paid $345 dollars a night for a Lodge Queen Premium Room, which includes a continental breakfast. There is also the option to hire e-bikes: electric-boosted mountain bikes to explore the area.