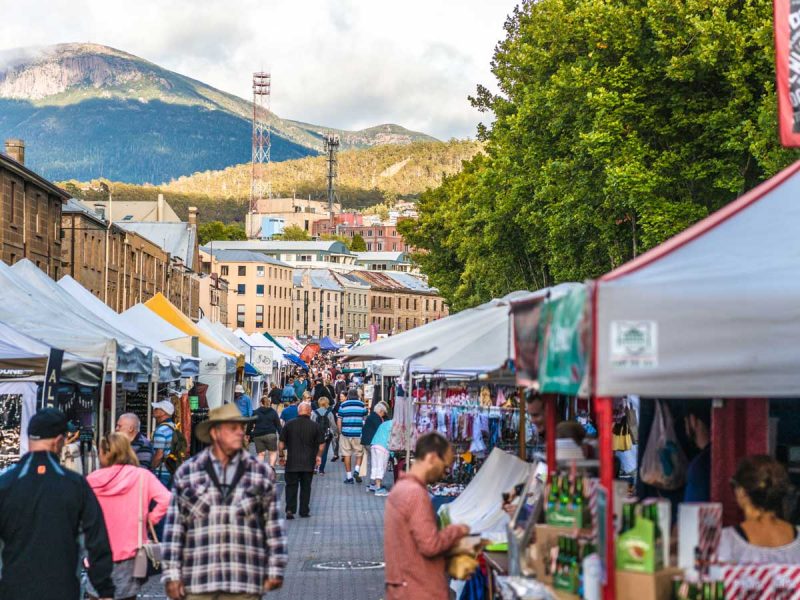 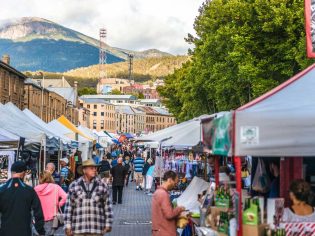 Tasmania is a hotbed of unique pieces and incredible finds – and nowhere more so than its thriving market scene. Here are some of the best spots to go treasure hunting in and around Hobart.

If there were ever a little island that could, Tasmania would be it. What other area, a good 240 kilometres out to sea, could produce all five food groups (that’s cheese, salmon, wine, stone fruit and cheese) to such artisan levels, to the loud and repeated appreciation of the rest of the country, with such little fanfare?

But there’s a lot more going on here than remarkably good feasting. Step out on any given weekend and you’ll see the breadth of incredible things to do in Hobart for yourself.

Hobart and its surrounds now host several markets, each with its own offering – and none further than an hour’s drive from the Tassie capital – where artists, designers, photographers, painters, bakers, florists, apiarists, horticulturalists and farmers sell antique clocks, fat strawberries, striped wallpaper and everything in between.

It’s almost too easy to get chatting to a local by asking about the garlic they’ve grown, the jewellery they’re selling, or the silk dress they’ve sewn. But inevitably you’ll find the conversation at Hobart’s markets will turn to how much you both love Tasmania.

The first Salamanca Market was held near Hobart’s silos in 1972 with 12 stalls. Now, up to 25,000 people can descend on Salamanca Place in one day.

Organic fruit and veggie vendors sell fresh produce across from the second-hand bookstall; buskers play folk music just along from the tea stall; nearby is a great cheese place and just across from them is someone selling felt hats.

In other words, this Hobart market gives you everything you need, once a week… A little like the perfect lover.

Our find: a handmade Huon pine cheese board. 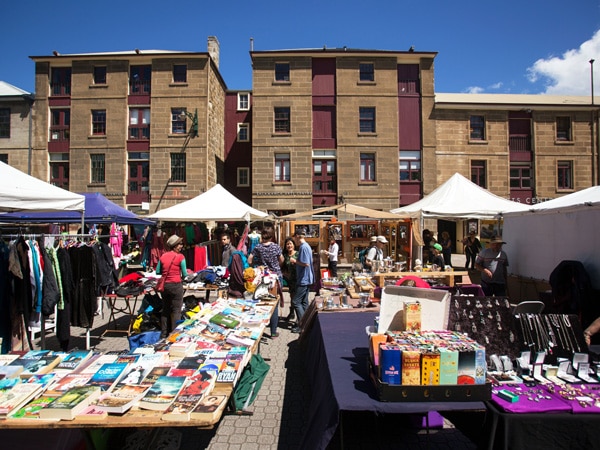 When: Every Sunday 9am–1pm, on Bathurst Street between Elizabeth and Murray Street, Hobart.

Hobartians now wonder aloud what they used to do on Sundays before Tasmania Farm Gate Market started in town back in 2009. This Hobart farmers’ market is a weekly ode to the fine pedigree of Tassie’s fertile soils and pristine waters, and the fact that everything on sale can be chewed, sipped or planted is what sets it apart.

There are coffee sellers who roast their beans locally, organic butchers whose pigs eat better than they do, and ruddy families offering bundles of freshly harvested rhubarb wrapped in cake recipes printed on brown paper. It’s no surprise this Hobart Sunday market has quickly risen the ranks to become one of the local’s favourites.

Our find: a bag of organic walnuts from 100-year-old trees. 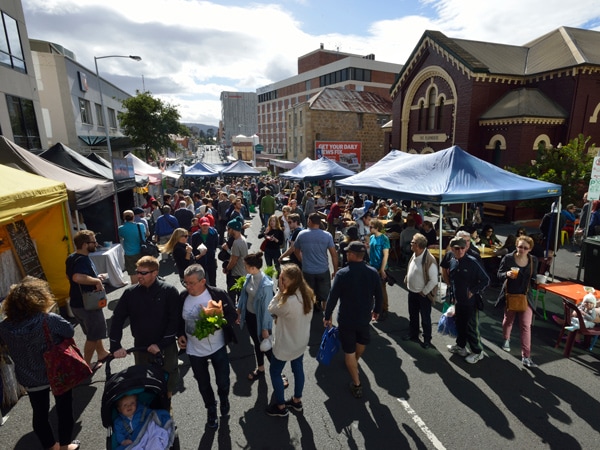 The Tasmania Farm Gate Market is a weekly ode to the fine pedigree of Tassie’s fertile soils and pristine waters. (Image: Chris Crerar)

The town of Cygnet, with its eclectic population and quaint rural setting, is unique.

Hippies, greenies, farmers, tradespeople, writers, artists and activists share the area with a growing number of mainlanders, who’ve discovered the grass is actually greener and cleaner here and have settled in for good.

Due to this diversity, the Cygnet Market is the most dynamic of those on the outskirts of Hobart.

It is a place where buskers aspiring to play at the annual Cygnet Folk Festival pluck and sing outside, and inside more live music, massage, tarot readings and plenty of good quality local products and produce can be found – amongst the usual market stuff. 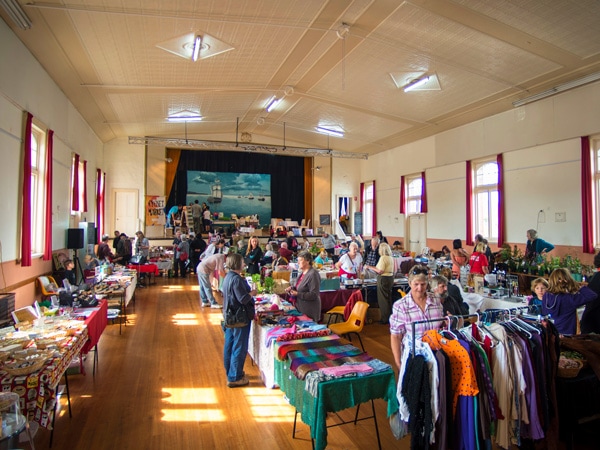 The town of Cygnet is unique with its eclectic population and quaint rural setting. (Image: Tourism Tasmania/Rob Burnett)

When a market is held in the town’s municipal memorial hall and advertised with such unselfconscious terms as ‘browse’, ‘bargains’ and ‘bric-a-brac’ you know you’re in for a good old-fashioned treat.

This simple market in Tasmania’s Midlands is as charming as its offerings of Devonshire tea, which are there to be enjoyed after first perusing the homemade goods, handmade crafts and local produce.

The market is also a stone’s throw from the early garrison town of Pontville, just over the Jordan River, where every second building you see was constructed in the early 1800s.

Our find: a cling-wrapped slab of homemade coconut ice. 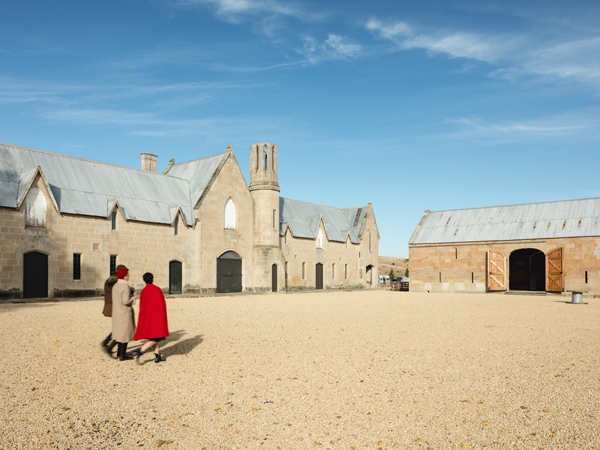 Brighton Market is a stone’s throw from the early garrison town of Pontville. (Image: Samuel Shelley)

Originally known as the Tasman Limited, the Margate Train – the last passenger train of the Apple Isle – felt its final rush of steel beneath its many wheels way back in 1978. Now stationary beside the Channel Highway, it has found a new lease on life as a market space.

Stall owners are privy to leases that last two years. Right now, you’ll find pre-loved footwear and clothing, a lolly shop, edible goods from Europe and South Africa, as well as handmade and vintage-inspired treasures – but that may change.

When you’ve run out of steam, the Pancake Train Café awaits.

Our find: a quirky cloud-shaped brooch made from Tasmanian blackwood. 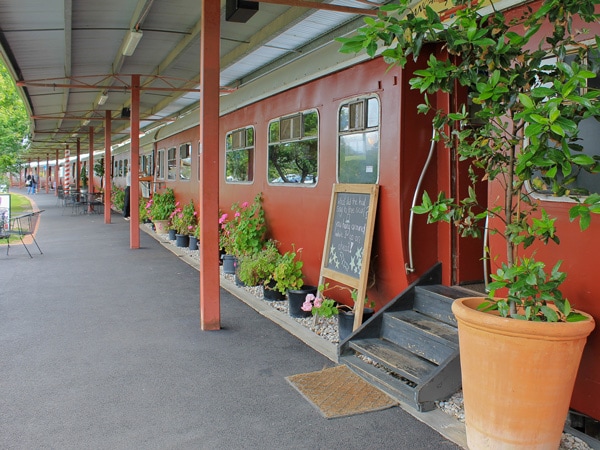 In a blue, Baltic-pine-lined, deconsecrated Presbyterian Church, a small group of ‘ladies’ have been selling their wares for ten years without any advertising, aside from one sign on the highway and one outside the building (‘MARKET TODAY’, it says).

Untainted by the modern world, there’s nothing trendy (or pricey) about this market. It’s all buttery banana cakes, bundles of Barbara Cartland books, chintzy sherry glasses and smelly soaps from Queensland, which means you might just find a bargain-priced gem in the chaos.

One stallholder told us she was in the process of moving house – she’d sold 12 rolls of unused Edwardian Stripe wallpaper to someone that morning.

Our find: a set of eight vintage silver-plated dessert spoons. 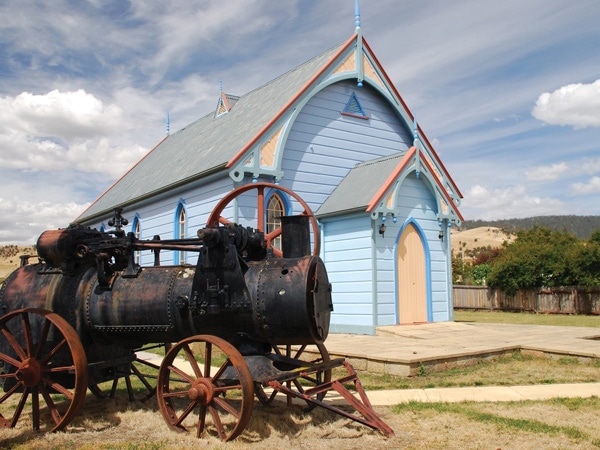 The southern midlands town of Oatlands is 87 kilometres from Hobart and the drive takes over an hour, but it’s worth it just to see the old blades of Callington Mill turning, and to pop into the traditional farmers’ market.

Locally grown veggies, preserves, homemade cakes and just-baked breads join a selection of handmade arts and crafts at this monthly gathering – you’ll get a real sense of community life at Oatlands Market, against a picturesque background.

Our find: a jar of cold-extracted organic leatherwood honey. 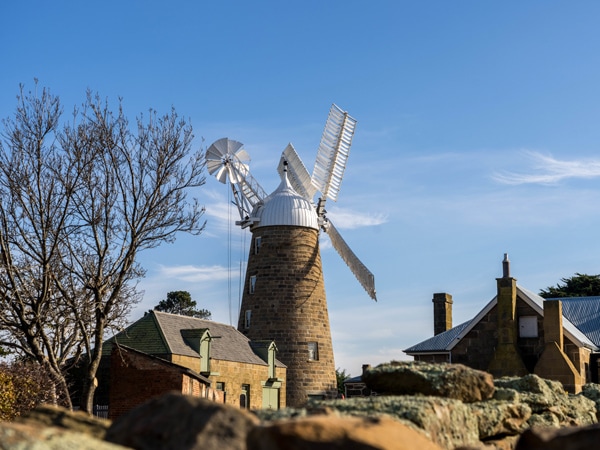 Pass by the old Callington Mill on the way to the Oatlands Market. (Image: Alastair Bett)

When: The first and third Friday of the month between October and March, 4.30pm-9pm, 17 Beach Road, Lower Sandy Bay

Hobart isn’t a city known for its balmy summer nights, but that doesn’t stop the locals from making the best of what the weather gods bestow; enter Hobart Twilight Market. While the market runs year-round at the Brooke Street Pier location, it’s the seasonal market at Sandy Bay in Hobart’s south that’s the real crowd-pleaser.

Roll on up for a convivial eve among dogs and babies, scout out your favourite food from the sizable food truck line-up, peruse the design stalls, and lounge on the grass while enjoying the live music soundtrack. Hang out at this Hobart market and you’ll fast-track your way to feeling like a local.

Our find: a hand-forged knife with a blade made from repurposed materials. 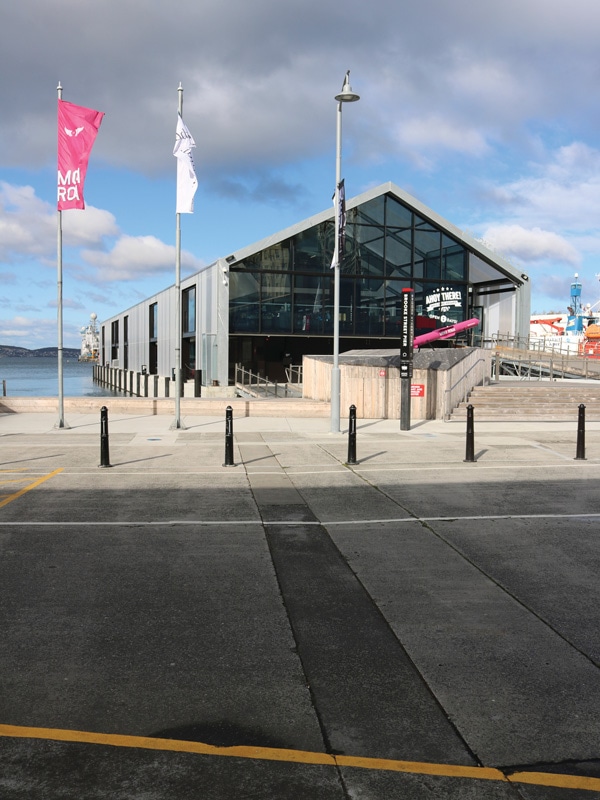 Looking at other things to do and see in Hobart? We’ve got you covered with our ultimate travel guide to the city. 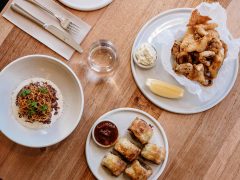 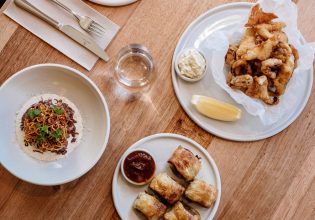 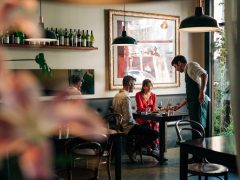 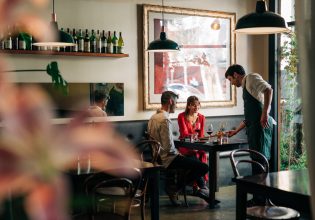