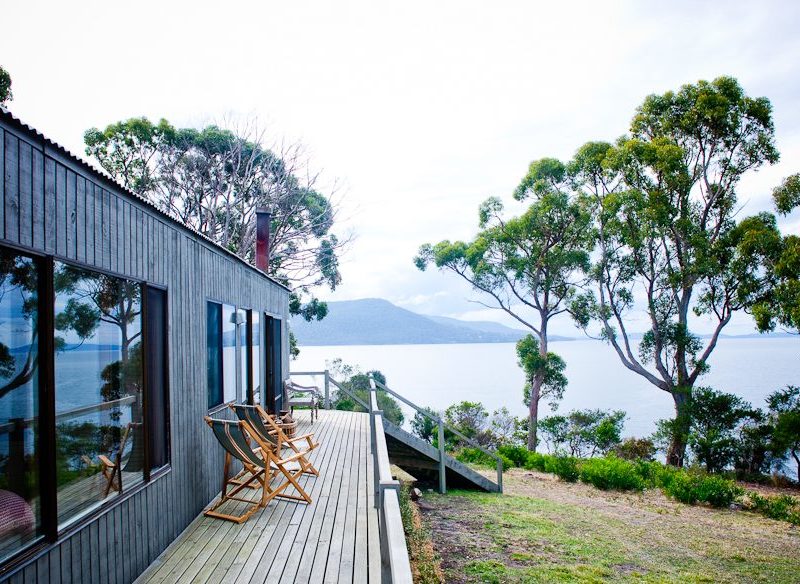 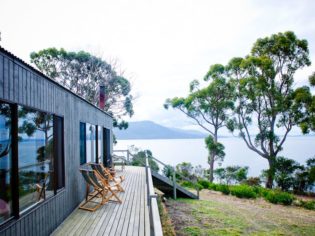 Ever dreamed on staying on your very own private island? Megan Arkinstall tries out Tasmania’s delightfully isolated and luxurious Satellite Island.

The teapot is boiling on the stove and the fire is crackling. I woke this morning in a ridiculously cushy and warm bed to the sun filtering through the bamboo blinds, without the assistance (and persistence) of an alarm clock.

I feel completely refreshed. Sinking into the lounge with a bowl of yoghurt and granola, I look out the window to the sea in the distance, sparkling under the rays of the morning sun, and decide it would be very easy to sit here reading magazines and drinking cups of tea all day.

When French explorer Bruni D’Entrecasteaux described this area in his journals, he said: “It would be very vain of me to attempt to describe my feelings when I beheld this lonely harbour lying at the world’s end separated as it were from the rest of the universe,” which couldn’t be more apt.

We’re on Satellite Island, a tiny speck of land that was discovered by accident on an expedition to Adventure Bay in 1792.

D’Entrecasteaux’s fleet had sailed west of Bruny Island due to a navigational error and had come upon this whale-shaped land where they recorded astronomical observations.

Many moons later, in the 1960s, the 34-hectare island was privately bought to farm salmon and sheep and, more romantically, for its new owner to pursue a passion for painting and writing poetry.

He built a humble house on the top of a cliff and operated a working salmon farm until around seven years ago, when his nephew Will and wife Kate (no, not of the royal kind) inherited the island.

Luckily for us, these Melburnians decided to share the beauty of Satellite Island and opened it to guests as a private retreat.

There are a few ways to arrive here – taking a boat from the mainland or by helicopter if you have one lying around – but we arrive via Bruny Island and follow somewhat of a foodie trail to buy provisions for our stay (stopping at Bruny Island Premium Wines, Bruny Island Cheese Co. and Get Shucked oysters, to name a few).

We are then met at Alonnah Jetty by island manager Richard Roe who delivers us to Satellite Island by speedboat.

To the Summer House…

Will and Kate completely transformed the house that Will’s uncle had built from a simple dwelling to a gorgeously styled three-bedroom guest abode aptly named the Summer House.

All navy, grey and white with natural elements of wood, sandstone and coir, the sophisticated styling is inspired by clean Scandinavian design with a laid-back Tasmanian seaside vibe.

We decide to drag ourselves away from the homeliness of the Summer House and explore this enigmatic island.

We pull on some gum boots that are sitting at the back door and set off through the wooden gate for a walk around the island’s cliff-top.

The signposted walk takes us along the edge of the island, past beautifully named places such as Dreamy Bay, Last Glimpse Point, Sunset Bay and Morning Light Bay.

We walk slowly, breathing in the fresh Tasmanian air, being sure to keep a look-out for wildlife. The island is home to sheep, wild quail, a pair of rare white-breasted sea eagles, as well as albatross and Pacific gulls, and it doesn’t take long before we spot the island’s own herd of deer grazing in an open paddock.

We slowly and quietly veer off course making our way toward them to get a closer look. Because there are no other disturbances in this tranquil little part of the world, the crunch of leaves underneath our boots alerts them and within seconds their little heads swivel our way and they bolt.

Later that day we get to spend time with two stags, Bert and Henry, who come to the back gate of the Summer House for a feed of cut apples, which they eat from the palms of our hands.

Chooks also happily roam around the house and guests are invited to collect freshly laid eggs from the pen.

Indeed, guests are welcome to forage for whatever they wish while they’re here: fresh herbs, veggies and fruit from the organic garden and orchard, go fishing for southern rock lobster or use one of the kayaks to get out to the punt, an excellent spot for flathead.

Or, if you’re feeling particularly adventurous, you can dive for abalone or sea urchin.

We’re gifted a bucket of freshly shucked oysters upon arrival, but we’re keen to have a go at doing this ourselves with a handful plucked straight from the rock shelf. We’ve never done it before so call on Richard to show us how.

Oysters fresh from the sea at the Boathouse

After a shucking demonstration – and the bonus discovery of abalone – Richard leaves us on the deck of the Boathouse to savour them with a glass of Tasmanian sparkling as the sun slowly sets before us.

Once a feed shed for the salmon farm, the Boathouse is now an alternative sleeping quarter to the Summer House, like an overwater bungalow Tasmania-style.

There’s probably no better place to sleep, particularly in the warmer months when you can lift up the roller doors to both of the bedrooms and lay in bed with the sound of water lapping at the jetty – it’s a magical experience.

Indeed, in a life where we sometimes forget to stop and take a breather, Satellite Island is the ideal antidote, a perfect measure of wild beauty and simple luxury. D’Entrecasteaux had also said “’twas nature and nature at her wildest mood”.

It seems not much has changed, thankfully.

Guests will need to drive from Hobart to Kettering for the Bruny Island car ferry, then drive to Alonnah Jetty where Richard will pick you up in a boat. If guests prefer, they can arrange to be picked up from Gordon on mainland Tasmania.