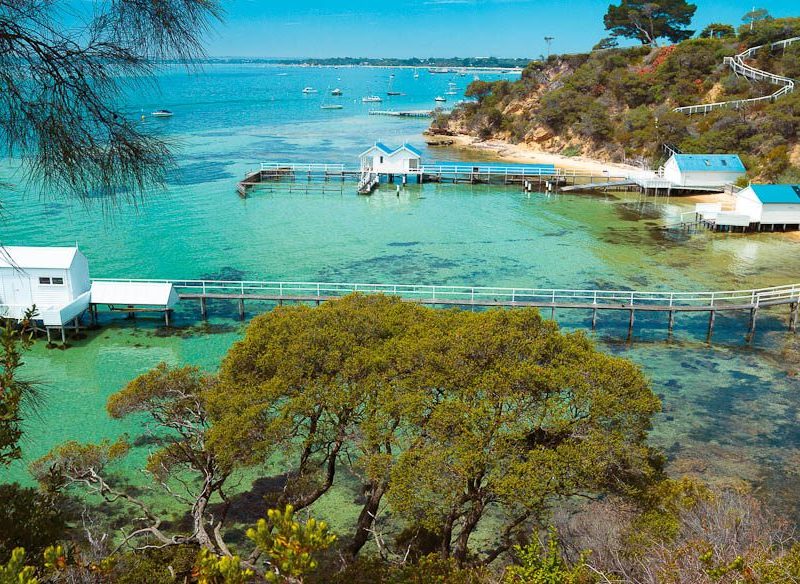 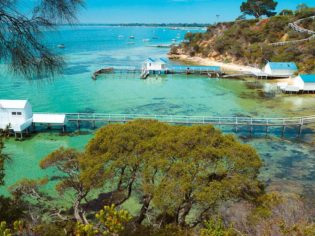 Any Victorian worth their coffee beans knows you’d be silly to go north during summer… not with that stunning local coastline to explore.

Here is our list of 10 of the best secret beaches in Victoria:

It’s certainly not obvious that there is a pretty sandy beach tucked below Portsea’s mansions. But if you walk to the end of Point King Road, you’ll find a hidden path leading to wooden stairs down to Point King Beach. Before joining the rich and famous on the sand, though, check out the monument commemorating the first hoisting of the Union Jack in 1802 as Britain took possession of the area (now Port Phillip Bay). Then take a peek at the homes and gardens on the cliff-top Millionaires Walk. 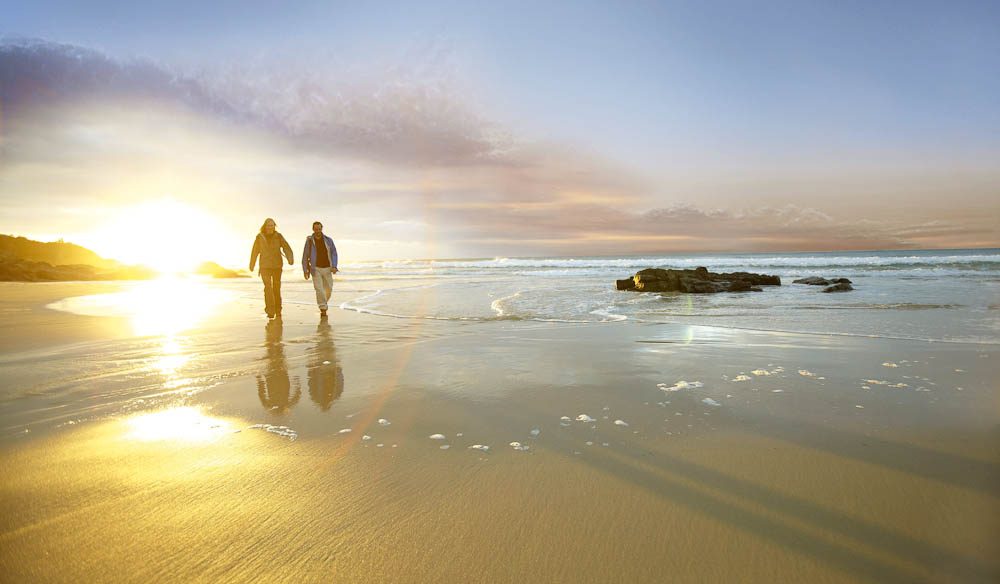 This plucky little beach community in Eastern Gippsland, surrounded by water and national park, has a trio of gorgeous beaches just outside of town that most tourists don’t know about. Betka Beach, located where the river meets the ocean, is perfect for kids to paddle in the shallow river and play on the lawns while dad barbecues. Quarry Beach has colourful rock strata, while Secret Beach, accessible via a staircase on Betka Road, has clean white sand, rockpools and a small sea cave. 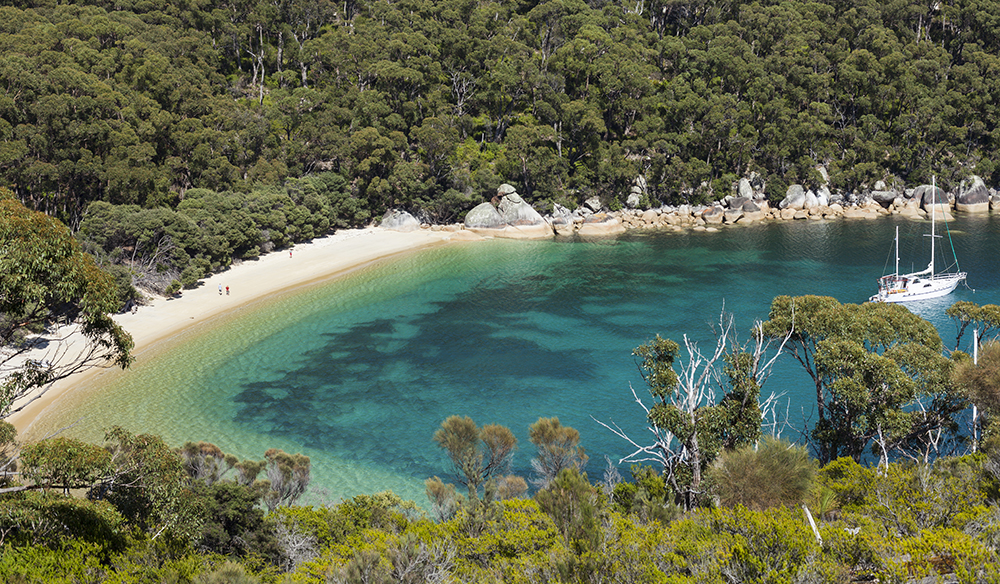 If you are a hiker (or boater) you can find pristine, uncrowded beaches on the eastern side of the Prom. Mountains plunge into the sea at Sealers Cove, while tiny Refuge Cove offers a terrific, safe little harbour for boats. At Little Waterloo Bay you’ll discover a landscape akin to Tassie’s Bay of Fires: granite boulders covered with orange lichen, which the heavy surf from Bass Strait pulverises into a fine white sand. You’ll need to camp to enjoy the beaches; each has camping facilities. 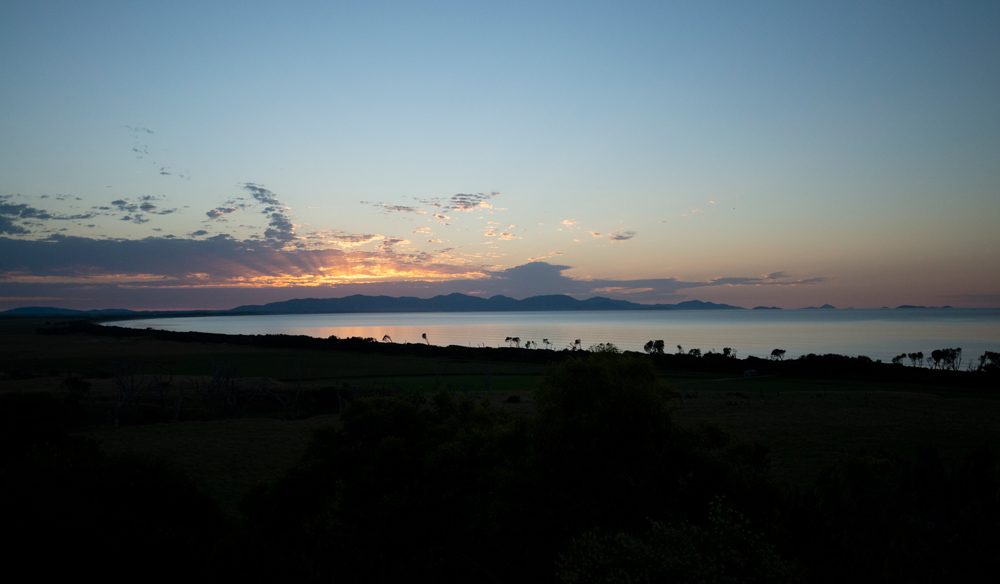 Stretching from Sandy Point to Walkerville, Waratah Bay is a stunning sweep of white sandy beach with panoramic views across to Wilson’s Promontory. You can walk for miles here without seeing another soul – even in summer. Better still, with its flat sandy bottom, the surf is generally very safe. Up the Sandy Point end, you’ll find Shallow Inlet, which is not only an amazing bird habitat but also a popular windsurfing and kite surfing site. In fact a speed sailing record was set here in 1993. (There are lifeguards during summer at Sandy Point.) 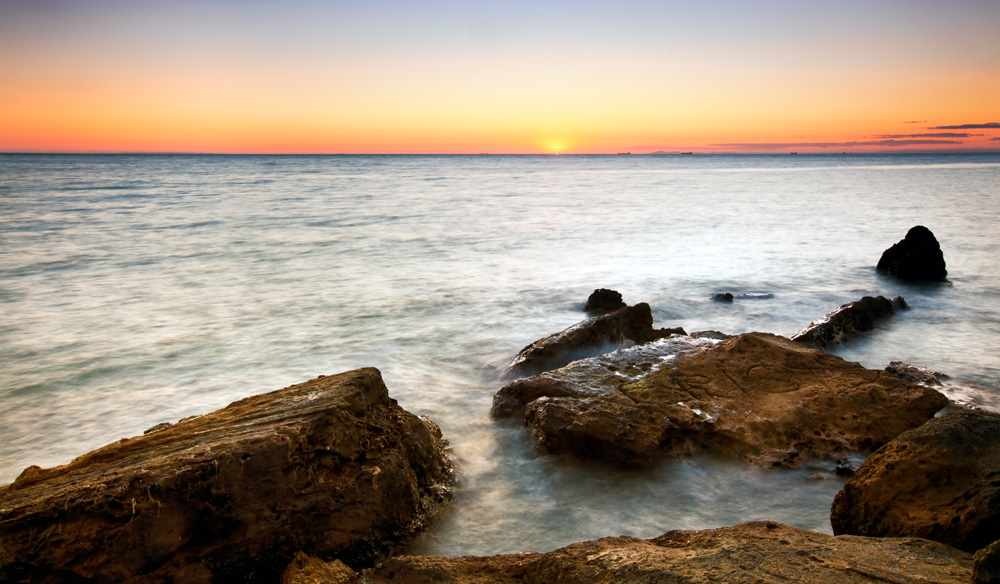 From the bike path at the top of the cliffs, you can look down at the pretty little Half Moon Bay nestled into a cove in Port Phillip Bay. The beach itself is a perfect spot for sunbathing, while the bay gets deep quite quickly making it a good spot for swimming laps. In the bay is National Heritage-listed HMVS Cerberus, which was scuttled here to make a breakwater. Finish the day with Mediterranean-inspired fare from Cerberus Beach House restaurant, a perfect spot to watch the sunset. (There are lifeguards during summer.) 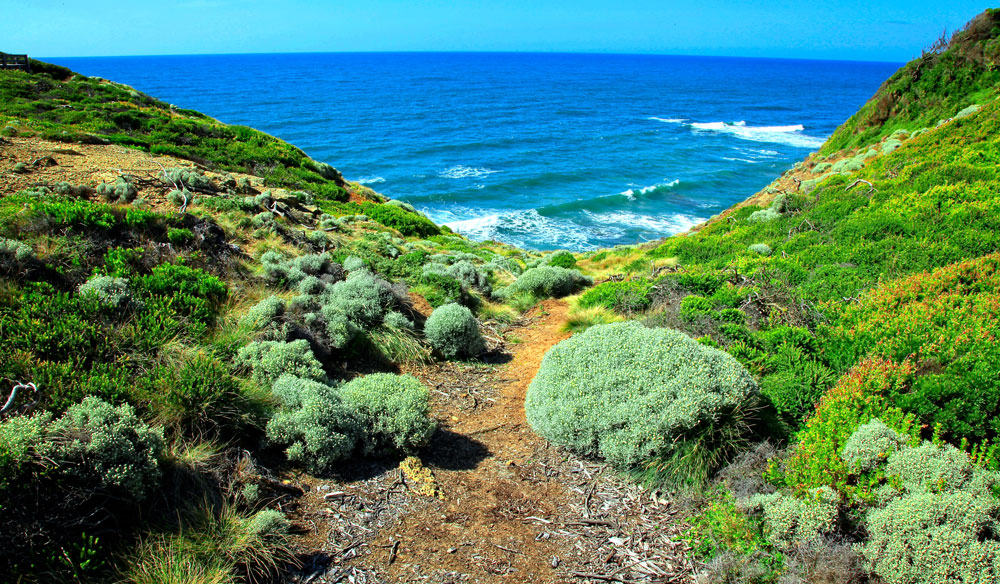 The Point Addis Marine National Park is a protected marine national park located near Anglesea on the Surf Coast region of Victoria, Australia.

Just around from Bells Beach’s famous point breaks is Point Addis, a sandy crescent rimmed by a dramatic sweep of ochre sandstone and limestone cliffs. The lookout next to the road offers panoramic views, before you walk through a section of national park down to the beach. If it’s low tide, walk along the rockpool ledges to Southside and Bells Beach, or just stroll up the northern end to the stretch of ‘clothing optional’ sand, if that’s your thing. There’s also an Aboriginal interpretive trail, the Koori Cultural Walk, with incredible views from the cliffs. 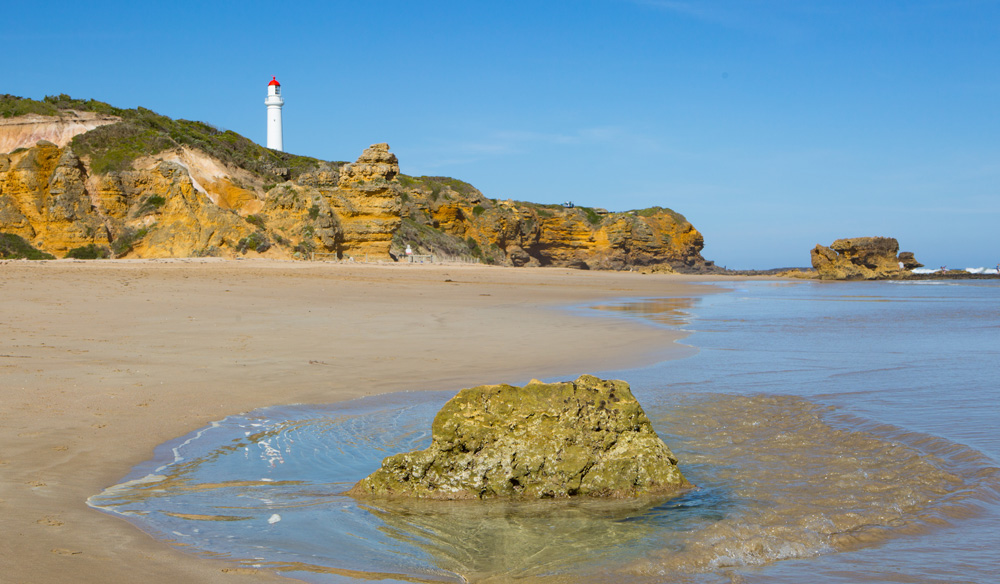 Want to escape the crowds at Lorne? Hidden below the red-roofed White Queen Lighthouse in Aireys Inlet is your answer: a collection of picturesque pocket beaches and rockpools beneath rugged red limestone cliffs. You can access them via the Cliff Top Walk, which has terrific ocean views. The locals have quirky names for these beaches, such as Sunnymeade, Smelly, Steppe and Sandy Gully. Turquoise pools offer hours of beachcombing, whilst at one headland you’ll find ‘the grotto’ – a pretty limestone arch, home to local nesting starlings.

In the heart of the Great Otway National Park, where the Aire River enters the Southern Ocean, lies Aire River beach. Here you can enjoy fine fishing, kayaking on the river, bird watching, and see koalas, kangaroos and wallabies in the coastal scrub. Since it’s smack bang on the Great Ocean Walk, you can hike along the coastal trail for spectacular views in either direction. Ambitious souls can also tackle the 12.4 kilometres to wild and beautiful Johanna Beach. There’s free camping, with composting toilets but no running water. 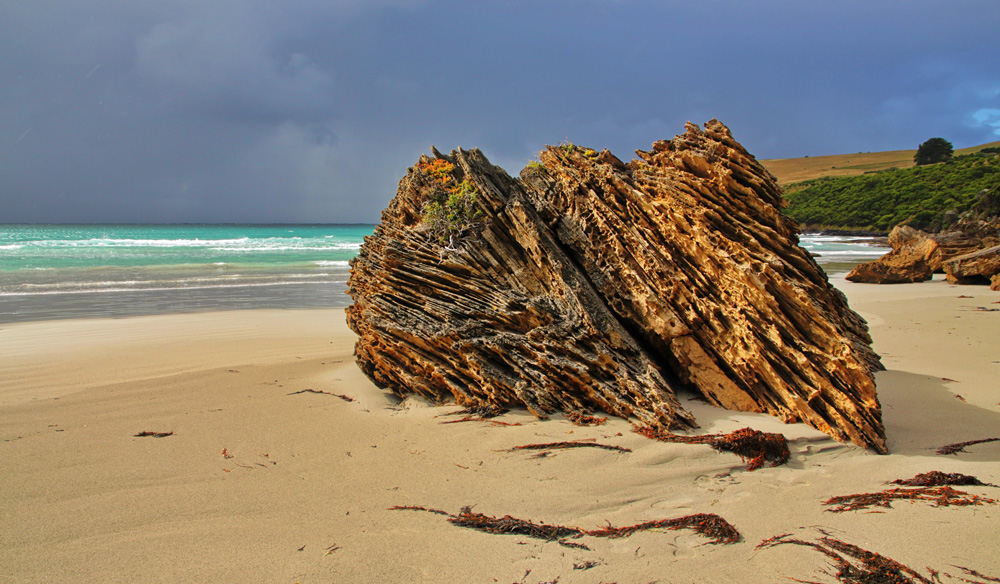 This four-kilometre crescent of fine white sand rims the aqua waters of Bridgewater Bay and is a great spot for beachcombing and all types of surfing: surfboarding, surf casting and windsurfing. The 130-metre cliffs of Cape Bridgewater (the rim of an ancient submerged volcanic crater) shelter the beach from the Roaring 40s while a good swell generally lines up to form long, gentle waves. Walk the Cape Bridgewater trail to see Australia’s largest permanent fur seal colony, a petrified forest and blowholes. (There are lifeguards in summer.) 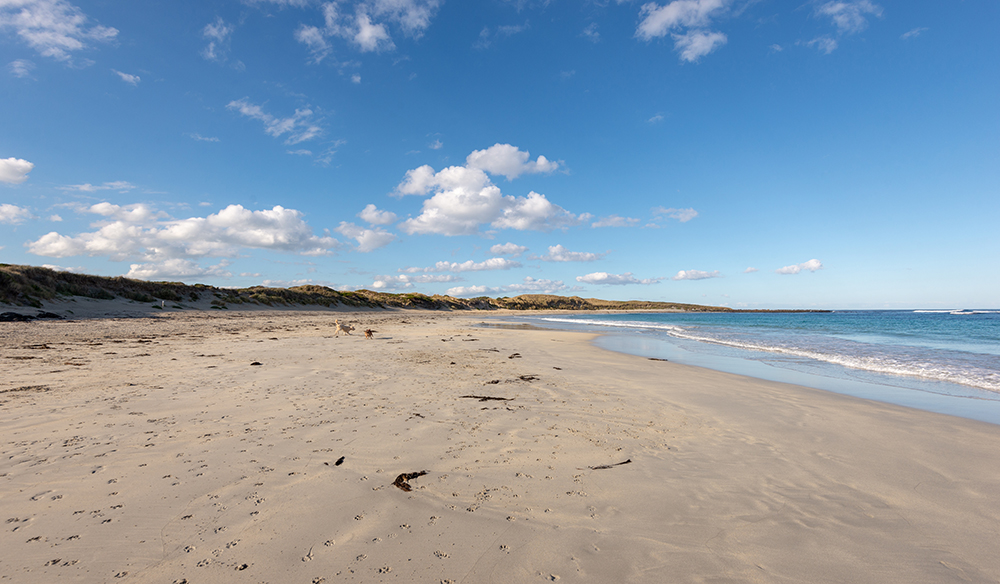 The charmingly-named Pea Soup Beach is a wide and pretty beach fronting the Southern Ocean, west of the historic seaside fishing village of Port Fairy. If you walk west along the coastline from the town you’ll discover this surprising 500-metre-long white sandy beach protected by a continuous basalt reef lying offshore. Many a local kid has learned to swim here in the shallow, sheltered lagoon and rockpools – it’s also a great spot for some beachcombing.

Need to know: Because these beaches are well-kept secrets, most aren’t patrolled by lifeguards. For more info and a full list of Victoria’s lifeguard-friendly beaches, head to beachsafe.org.au