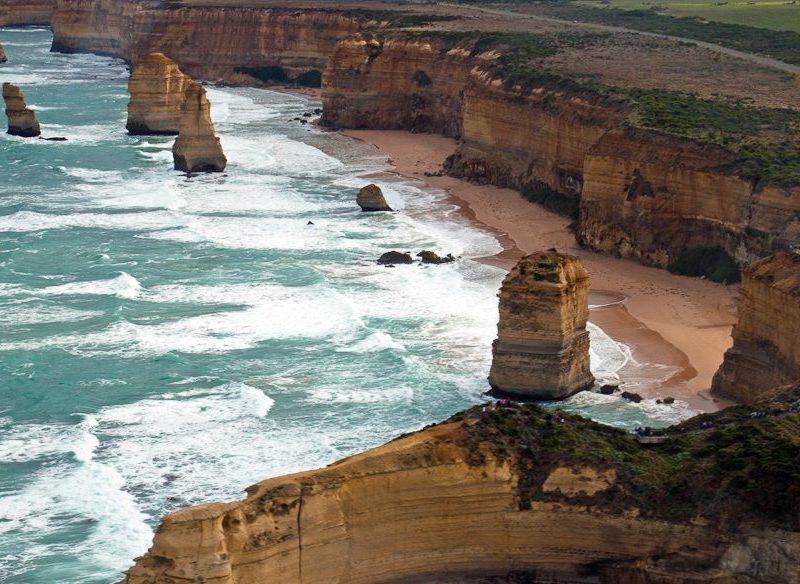 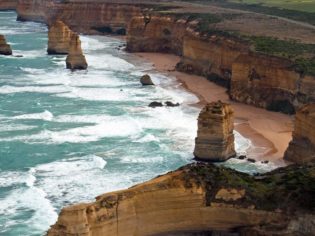 Are Victoria’s famous Twelve Apostles in fact a ‘faker’s dozen’? Taking the spectacular Great Ocean Walk is the only way to find out (with John Borthwick).

The miscounted limestone stacks we  know as the Twelve Apostles wait patiently offshore like naughty kids who’ve been stood outside for telling porkies. But it wasn’t these ochre columns who fudged their head-count and name…

I’m hoofing along the cliff-beach-river-heath-forest trail known as the Great Ocean Walk with a gaggle of eight other hikers. Our ultimate goal in a few days will be the Twelve Apostles and I figure that as we go, the truth about their misnaming and misnumbering will emerge.

“That was a very punchy first day,” says our guide Jenny. Almost like a Melbourne joke we had four seasons come at us in one afternoon: rain, sun, wind, brine, king tide, even hail. But what a heart-charger: oxygen in buckets with an adrenaline chaser. 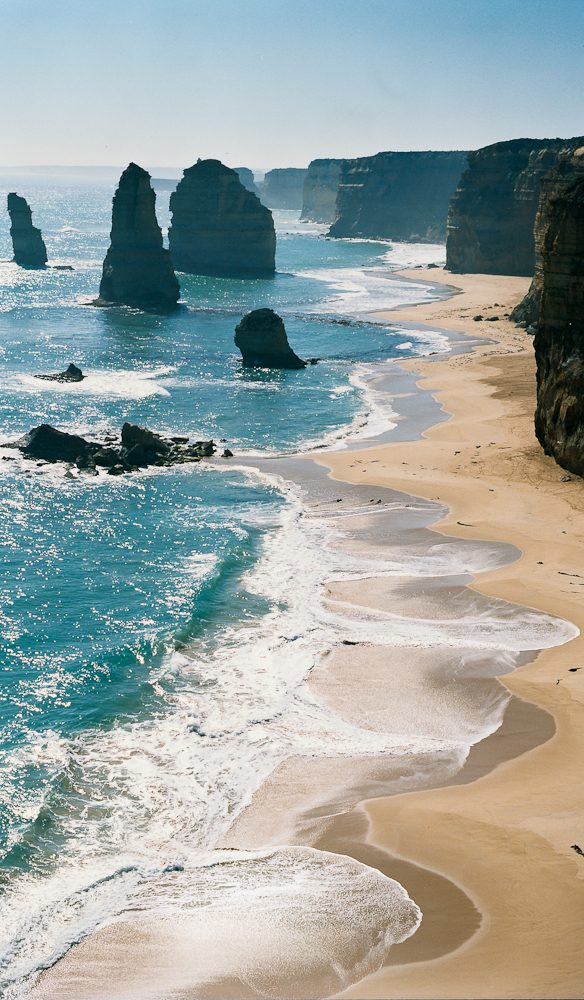 Do the 12 Apostles really number a dozen? (photo: Mark Roper).

Our first day, of four, ended with us scrambling up the dunes of beautiful Johanna Beach – named after a brig wrecked there in 1843 – with a rising tide snapping literally at our heels.

We clamber to dry ground, panting and ranting with delight. Even better, there’s a van waiting to whisk us – sweaty, wet and salt-caked – to the creature comforts of the Twelve Apostles Lodge.

I soak my feet in its outdoor foot spa, take a hot shower and then head to the big, friendly dining room to refuel on coffee, canapés, wine and wi-fi before a memorable dinner of baked salmon.

Over a dessert of poached pear and ice-cream, Jenny explains that the original, hayseed name of the Twelve Apostles was the Sow and Piglets. Not a great come-hither title for a future luxury lodge, either, I imagine.

Our excursion, a commercial trek known as the Twelve Apostles Lodge Walk, covers four successive sections – 56 kilometres all up – heading westwards to the Apostles on the 104-kilometre Great Ocean Walk public trail.

As lodge guests we don’t camp but sleep and dine in comfort each night, with transfers taking us to and from the trail. 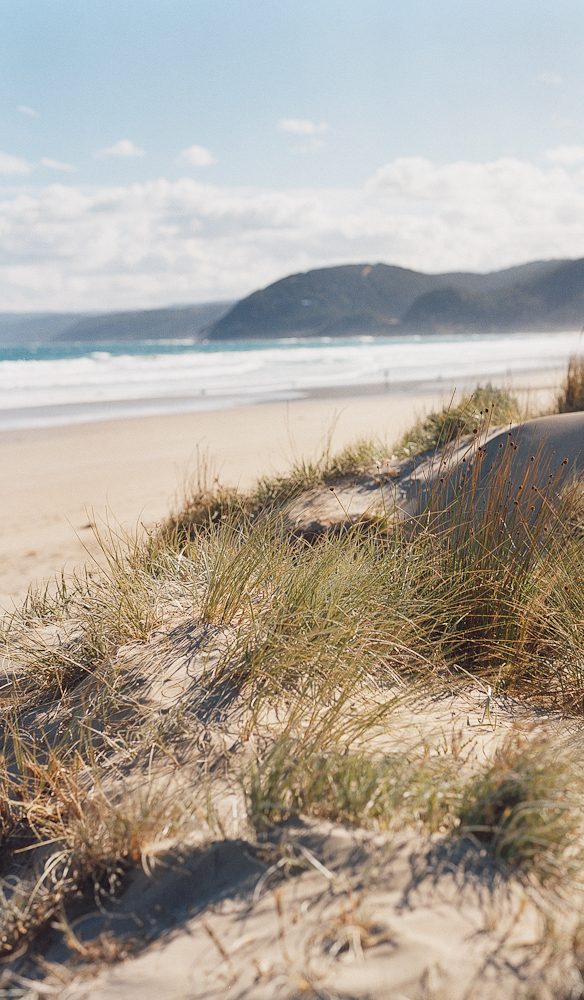 Our second day is harder, in fact, the hardest: an eight-hour hike over varying terrain. It’s only 12 kilometres but think hills and gullies, then more of the same.

That said, anyone who’s moderately fit, has stout boots and some intestinal fortitude to match can do it. The name of the beach where we start today, Milanesia, commemorates yet another wreck – one of 638 reasons this is called the Shipwreck Coast.

We ramble on, descending easily at first, sometimes in a group and at other times walking solo with our own thoughts. The vegetation changes as much as the terrain. Tree ferns, towering mountain ash, coastal heath and stands of stringybark give way to gobsmacking cliff-top vistas that stretch from Cape Otway in the east to Cape Volney far ahead in the west.

The Southern Ocean swell is having a tantrum, but the day is fine and the sun is out. On a clearing above Ryans Den we dig out of our day packs lunches of fresh salad and pasta that the lodge chef has prepared. No soggy sangers on this march! Jenny conjures up some sweet treats and we’re off again. 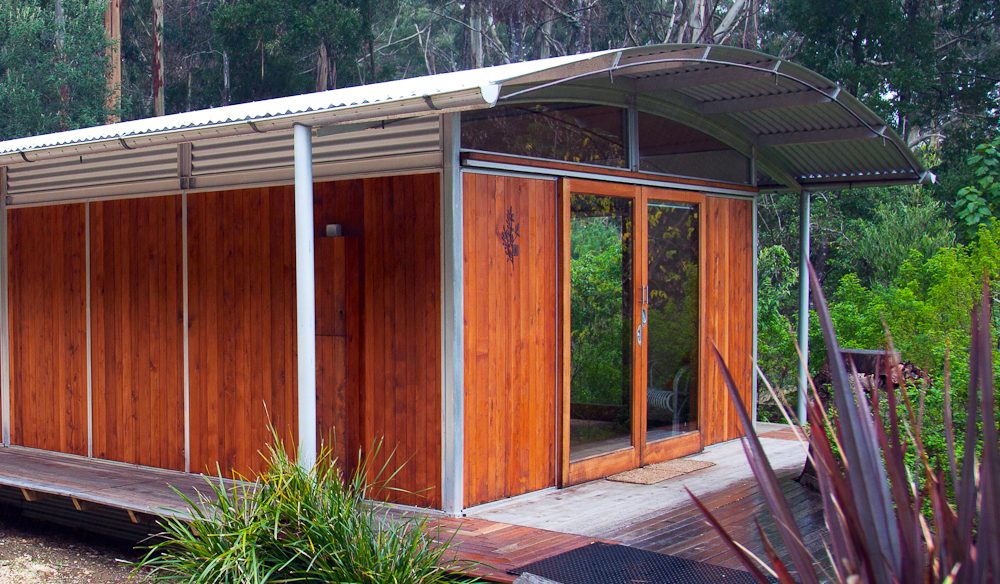 Our late afternoon ascent towards Moonlight Head is a one-foot-after-another plod up 138 steps cut into this well-groomed track. Surveyor Charles La Trobe (who became the first governor of Victoria) pushed through here in 1846, battling the dense and pathless scrub.

Lying exhausted in his tent at night, he wrote, ‘Had a day of the most severe exertion I ever encountered’.

His dinner that night certainly wasn’t the chicken roulade followed by chocolate cake that the lodge’s resident chef Ha Nguyen serves us. Nor would La Trobe have dreamed of a purpose-built, eco-ticked, centrally heated lodge with en suites.

“We aren’t a boot camp!” declares Dana Ronan happily, co-owner and director of the lodge and walk. 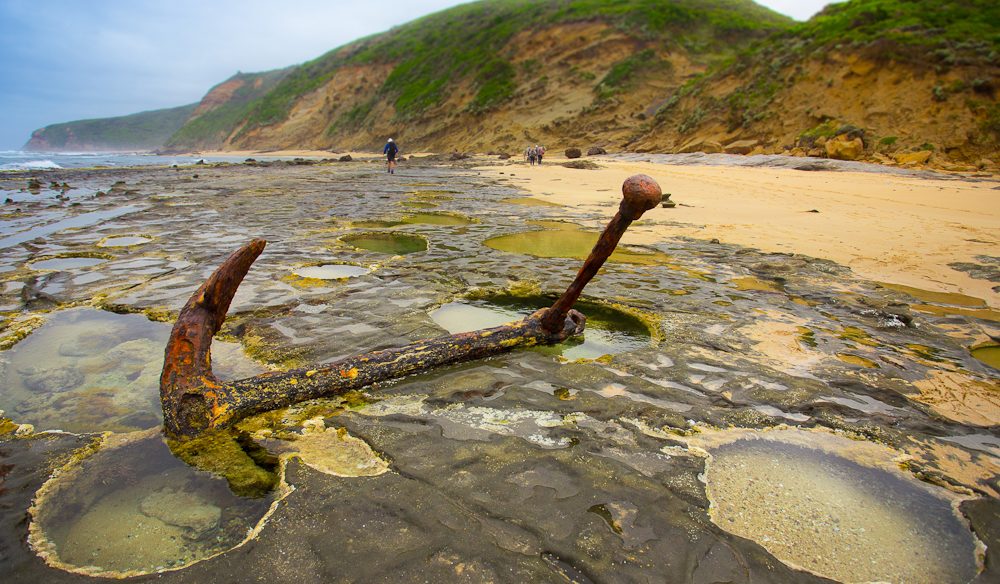 Anchors in the rock at Wreck Beach.

Day three sees us wake early and choosing a gourmet kick-starter from the menu, in my case porridge and an omelette. Then it’s boots-on, packs and walking poles ready, and we hit the trail again.

We start at The Gables headland, one of the mainland’s highest cliff-top lookouts, before dropping down to Wreck Beach where several historic shipwreck anchors remain embedded in the rock shelf.

It’s an easier day today, with only 13 kilometres to cover. Rounding a bend in the scrub, we almost collide with two eastern grey kangaroos, much to the delight of Caroline, a Canadian traveller whose sightings to date of Australian marsupials have principally been on tea towels and calendars. 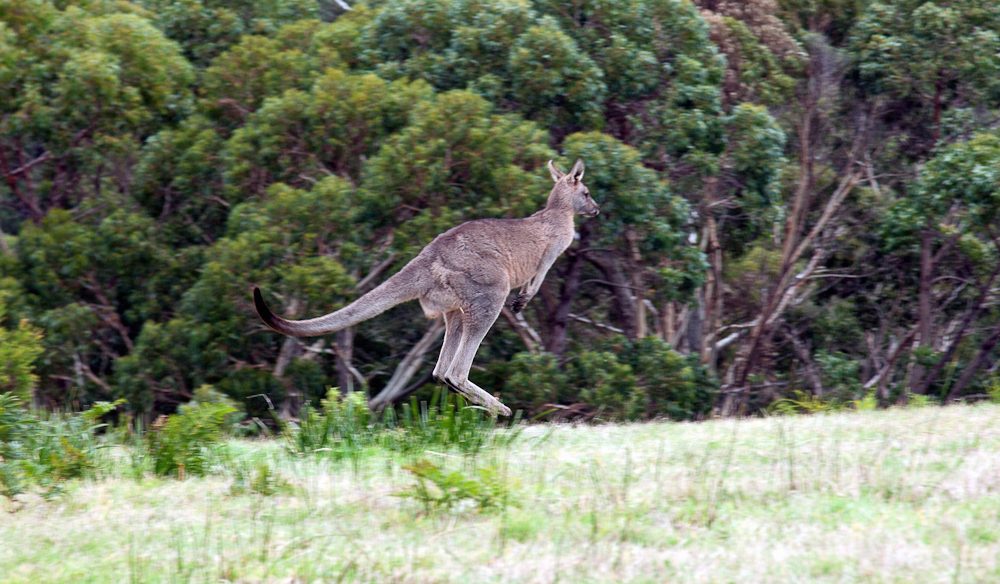 After lunch near the Devil’s Kitchen we catch our first, distant glimpses of the Twelve Apostles. A good time to tease out more of their story from Jenny and Dana.

It seems that Muttonbird Island near Loch Ard Gorge was known originally as ‘the Sow’ and the smaller nearby stacks as ‘the Piglets’, but in the 1920s a tourism spin-doctor engineered a change from the bacon-friendly original to ‘The Apostles’.

No numbers mentioned. A later spinner, also Biblically inclined but numerically challenged, added ‘Twelve’ to the title, although there were only ever nine little piggies.

Our sunny afternoon hike ends at the Gellibrand River and the village of Princetown, where the van awaits us again with its promise of lodge-lizard indulgence and a good wine and recap session around the foot spa.

The final (half) day 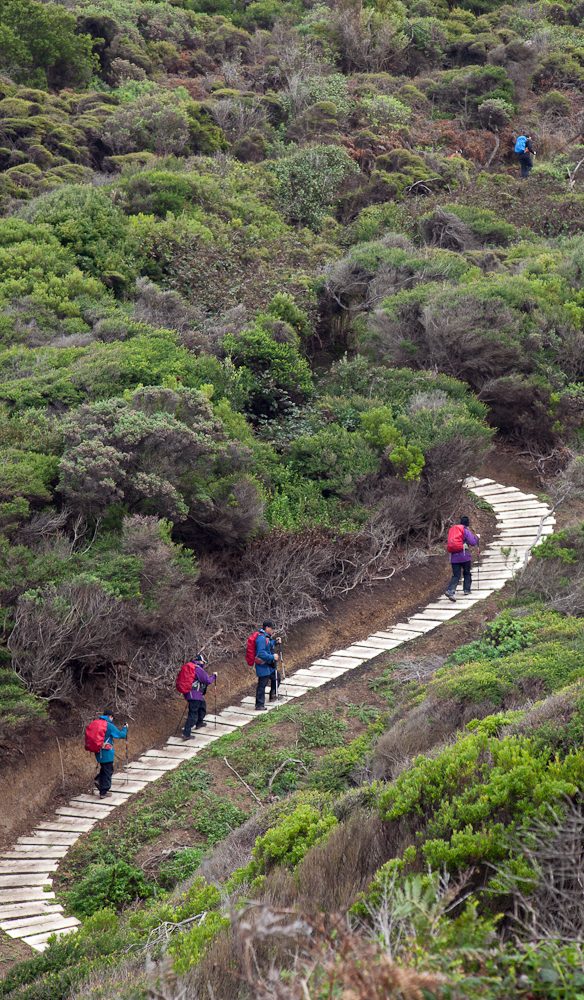 Your steps counter will thank you (photo: John Borthwick).

The finale is in fact an easy, half-day amble through low coastal scrub with the Apostles looming ever closer. We’re now in Port Campbell National Park with the Great Ocean Road nearby, although still out of sight and earshot.

And then, suddenly, too soon, there they are, just offshore, the celebrated, apostolic piglets, up to their knees in ocean and battered by waves. We drop our packs, the journey done, the kilometres behind us, and clamber down the steep, stone descent of the Gibson Steps.

From the beach, the old red pillars, lathed by the sea and gales, seem like castaways hoping for someone to toss a rope and haul them back to shore. More prosaically, we learn that theses icons were formed by the sea’s relentless erosion of the soft limestone cliffs.

Hollowed-out like Swiss cheese into caves whose roofs then became arches, the surrounding structures were washed away, forming islands with archways. In time those arches collapsed, leaving pillars up to 50 metres high.

With the Apostles, the 12 turned out to be nine. Never mind, but they kept on eroding and in mid-2005 the famous ‘London Bridge’ arch collapsed: one down, eight to go.

The lodge lays on one last thrill for us. We pile into two helicopters for a fly-by, a head-count if you will, of the Sow, Piglets, Apostles, Apostates – call ’em what we may – this faker’s dozen of ancient outriders standing sentinel before a coast of time-gnawed cliffs and shipwreck memories. 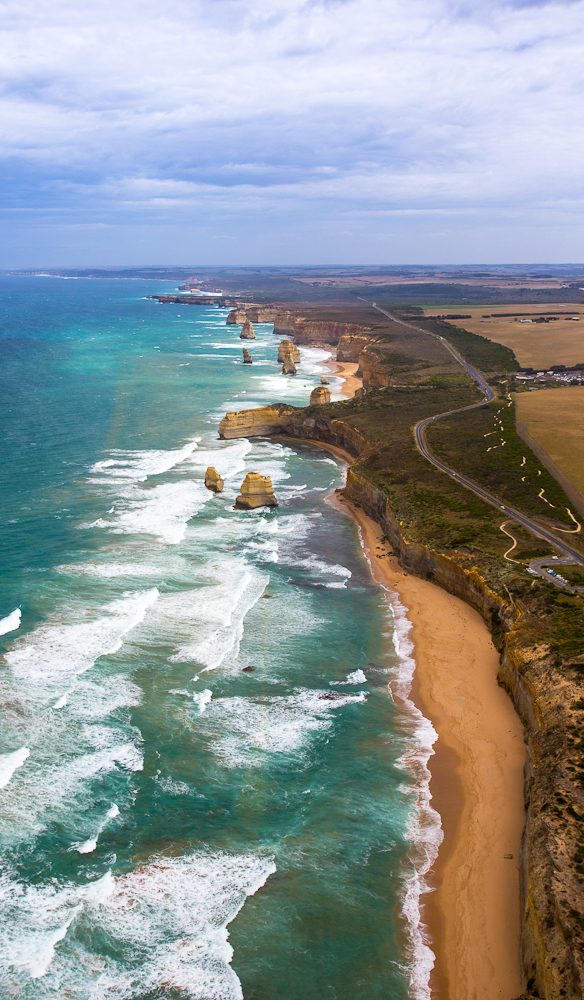 The walk culminates in a helicopter flight over the Twelve Apostles (photo: John Borwick).

Getting there: Twelve Apostles Lodge Walk is located at Johanna, 250 kilometres (three hours’ drive) from Melbourne on the Great Ocean Road; transfers to/from your Melbourne hotel or airport are included in the tariff.

Playing there: The Twelve Apostles Lodge Walk is an all-inclusive, four-day/three-night, lodge-based excursion. The walk, graded moderate and priced from $1995 per person, includes accommodation, meals, outdoor gear, guide, transfers and a 10-minute helicopter ride finale. There is no single supplement charge. Standard group is 10 walkers, and it runs from September to May.