A feast of experiences in WA's Southern Forests and Valleys 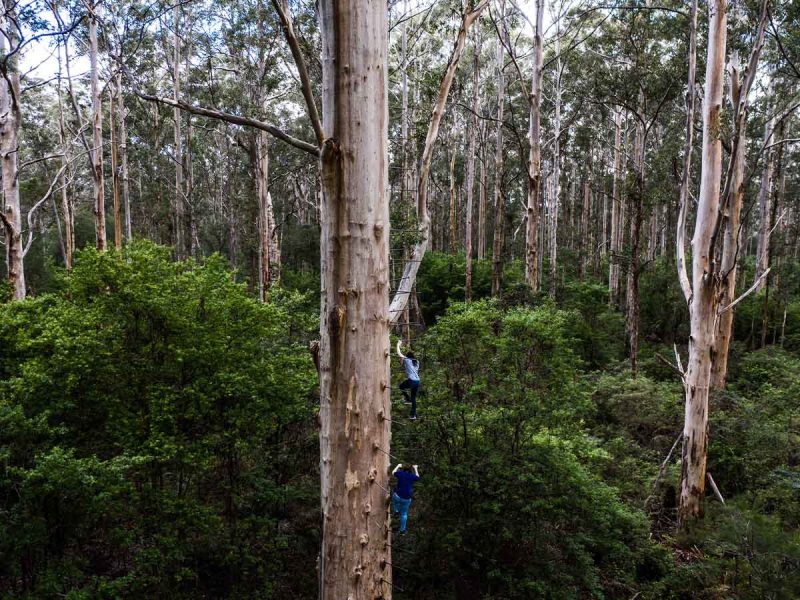 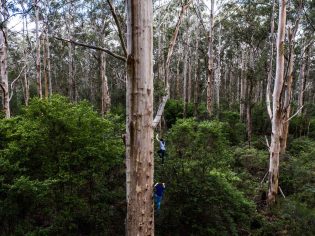 Filled with towering Karri Forrests, hidden valleys and world-class nature experiences, the Southern Forests and Valleys is also home to some of the country’s finest varietals and gourmet produce. Here’s the dirt on this up-and-coming epicurean hub.

The spoils of truffle hunting

The youngest of the pack has picked up the scent. Stopping suddenly, she lowers her nose to the ground to trace the pungent aroma, and when she finds what she’s looking for she paws at the soft earth.

“Good girl!” cries Mel Booth, encouragingly. Gunnah the labrador is training to become a truffle hunting dog, just like the other premium hunting dogs at Australian Truffle Traders. “She’s recognised and followed a scent cone on the breeze, which is exactly what we’re after,” Booth explains.

Deciding to put down roots of their own in Manjimup after the first truffle was found here in 2003, Mel and husband Gavin are now two of the country’s most experienced producers of the prized Australian black truffle (known also as the Perigord truffle in France) with their premium-grade produce sought-after by Michelin-starred chefs and restaurants around the world.

“It’s the combination of very fertile soils and the right weather conditions that make this area special,” Booth says. With prices fetching up to $3000 per kilo, and with more than 90 per cent of the southern hemisphere’s black truffles coming from Australia’s Southern Forests and Valleys, you could say the soils we’ve been tramping are rich indeed. 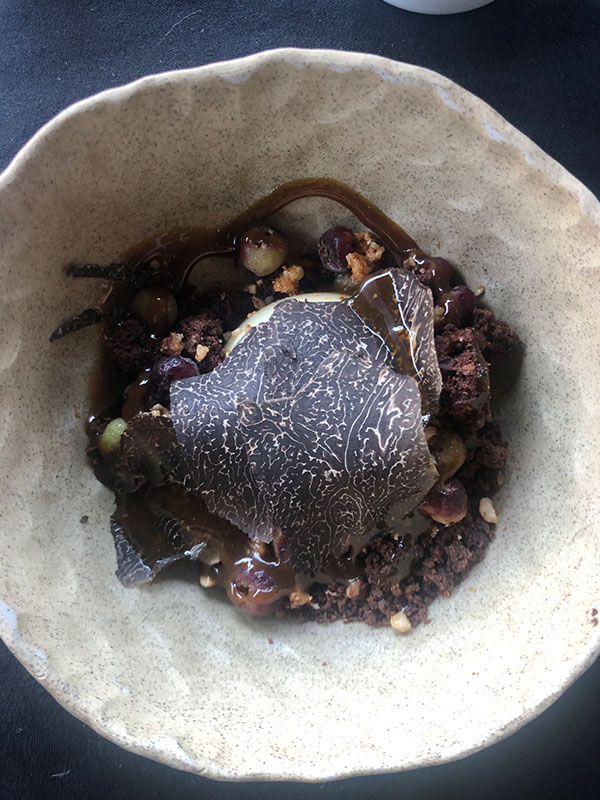 A truffle hunt is just one of the many agri-tourism experiences on offer in the region, located just over three hours’ drive south of Perth. It’s early May and, as we crunch our way over newly fallen leaves in the dappled light of a grove of hazelnut trees, there’s the unmistakable sense that something (besides truffles) is stirring in the air.

Stretching from Balingup in the north to Walpole in the south, and from Nannup in the west to Boyup Brook in the east, the collection of tiny trail towns that includes Pemberton, Manjimup and Bridgetown at its heart, makes up the Southern Forests and Valleys sub-region in the middle of the state’s South West.

Flying under the radar until relatively recently – due partly to the popularity of neighbouring Margaret River – the area is starting to get the recognition it deserves, with the variety, volume and quality of its produce earning it the title of ‘WA’s food bowl’, and its cooler climate allowing for production of top-tier Burgundy-style wines from Pemberton vineyards. And while you’ll find natural treasures and gourmet delights to dip into all year round, the cooler months are when this area really shines.

People get excited about the onset of winter here the way those in coastal parts do about the start of summer. Magical morning mists roll into sleepy streets, across verdant vineyards, over still lakes, and through the valleys of old-growth giants. Winter rains bring cascading waterfalls and fill rivers such as the Blackwood to the brim. And while cosy tearooms, art galleries and boutique cellar doors offer indoor comfort, the region’s star-studded foodie event brings everyone out (literally). 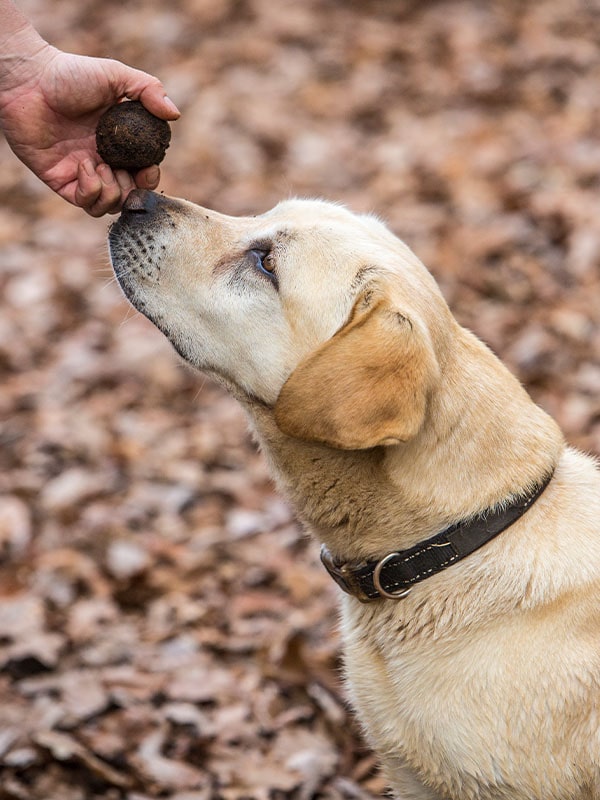 I was last in Manjimup nearly a year ago for the 10th anniversary of Truffle Kerfuffle. The annual food festival held in June has, over the past decade, featured celebrity chefs and international culinary heavyweights including Paul West, Poh Ling Yeow and Bruno Loubet. In 2021, the line-up included Guillaume Brahimi (via video link), Tasmanian-based wild cook Analiese Gregory, and Margaret River-based native food chef Paul Iskov, of Fervor.

After a glorious long-table lunch in a secret forest location where Iskov and his team prepared a six-course degustation, blending local and native ingredients, I asked what keeps him coming back here. “The Southern Forests is an incredible part of the world that feels that little bit more untouched. I love everything here from the passionate producers, to the welcoming community, to the produce itself that’s second to none,” Iskov says. Ashley Lewkowski is one of those passionate producers and, as I continue my road trip 20 minutes south to Pemberton, I decide to pop in to see the award-winning winemaker at his family-run winery, Lost Lake. 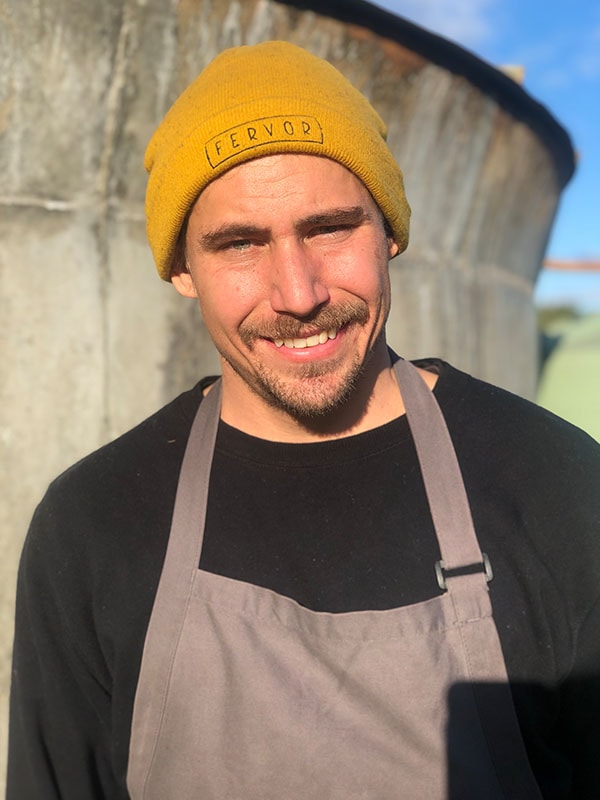 Positioned on the outskirts of town, Lewkowski’s property, where he lives with his wife Tia and their three children, contains some of the oldest vines in the region.

“We live and breathe the relaxed lifestyle here and love living in harmony with the environment,” he says. “Cause and effect is important to me, so I employ the best environmental practices I can.” As well as the property’s pigs, which control the winery’s waste, the family’s 13th-generation miniature sheep act as walking lawnmowers amid the vines. “It means I don’t need herbicides, which makes for a healthier ferment and gives those great characteristics from the terroir.”

Lewkowski’s stand-out wines include his pinot noir and pinot rosé, but surprisingly it’s his experimental creations that are causing a stir; using winemaking techniques to produce a pink cider from local apples, and producing a popular chilled honey merlot (which also comes in a can) that sells out each year. Lewkowski hands me a takeaway tinny, telling me it’s good for my carbon footprint. 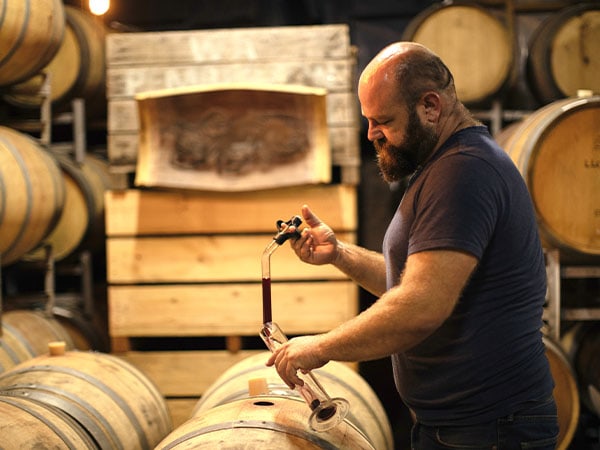 Before I leave, I notice a few retro TV sets in the corner and Lewkowski tells me they were props in the movie Jasper Jones, and the space where we’ve been standing also doubled as a production office for the cast and crew when the film starring Toni Collette and Hugo Weaving was shot in town in 2015.

For a small town, Pemberton has many such surprising finds. Jaspers, the stylish whiskey bar and restaurant on the town’s main street where I’ve stopped for dinner, wouldn’t be out of place in one of Perth’s hip inner suburbs. It stocks an incredible global range including familiar peaty single malts from Scotland to those I’ve never heard of from Taiwan, Iran and Japan. With the restaurant championing local produce, you’ll find rustic dishes here such as herb-crusted lamb rack with truffle mash or the creamy marron pasta I’m enjoying by the fire.

There’s definitely change afoot in the old timber and farming towns in the region, from modern city-style cafes like Wild at Heart and Park Manjimup to coffee roasters such as Southern Roasting Co. and craft brewers like Tall Timbers Brewing Co. popping up. With the WA government’s plan to end the logging of native forests by 2024, to protect them for future generations, the area’s transition to tourism is perfectly timed. 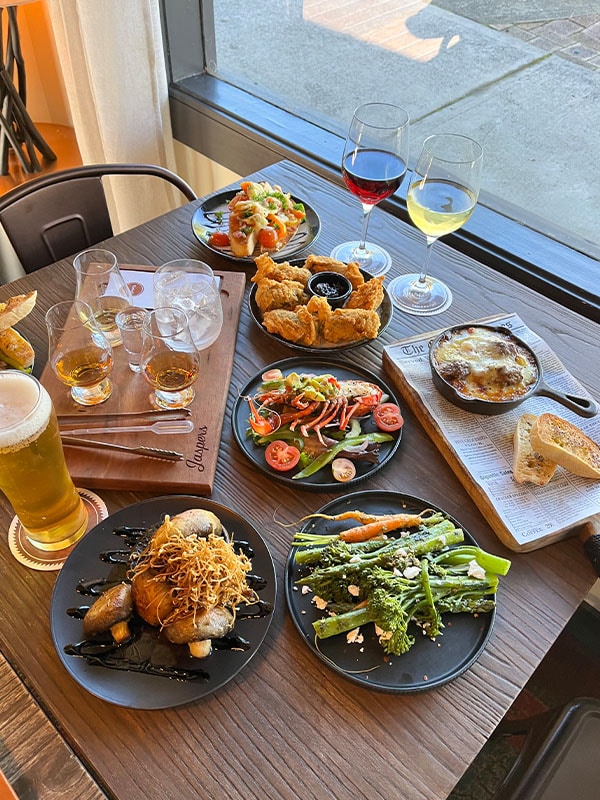 Feast on small plates paired with local beverages at Jaspers in Pemberton.

You can walk off all those indulgent meals on simple circuits like those found in Gloucester National Park or on the world-famous multi-day hike trail, the Bibbulmun Track. Stretching 1000 kilometres from the Perth Hills to the coast on Noongar Country, the track can be accessed by walkers from towns such as Balingup and Pemberton. If bike riding is more your thing, dip in and out of the equally long Munda Biddi Trail, at towns such as Nannup and Manjimup. Pemberton Discovery Tours takes some of the hard work out of both of these trails with its transfer service.

Climbing the Gloucester Tree in Gloucester National Park is also a nature-lover’s rite of passage. After standing at its base, looking up into its canopy, I start climbing the 58-metre-tall karri knowing that even if I don’t make it to the top I’ll be leaving the region on a high. 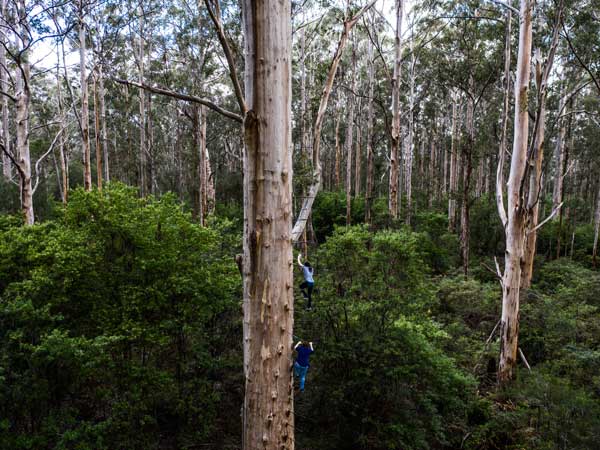 Ampersand Estates, located 25 minutes north of Pemberton, is the region’s latest winery. The reimagined version of the area’s oldest winery, Donnelly River Wines, is a sophisticated offering, producing varietals such as pinot noir and sauvignon blanc, in partnership with renowned winemakers such as Bruce Dukes. With its cellar door, curated gourmet picnics, and on-site distillery that partners with local producers to create vodka and gin from cherries, honey and finger lime, Ampersand Estates is a great way to taste the region.

With luxury cabins conveniently located behind its modern whisky bar and restaurant, Jaspers in Pemberton is the perfect place to stay if you’re wanting to base yourself in town. The boutique luxury accommodation has architect-designed studio spaces with king-sized beds, en suite bathroom and rainfall showerheads. There is also a covered private deck with bike racks.

For a small, unpretentious timber town, Pemberton’s main drag offers a surprising number of modern offerings, such as Wild at Heart Cafe and Tree House Tapas and Wine Bar.

Likewise, Manjimup has excellent options to fuel up, such as Tall Timbers with its attached shop and cellar door, and Park Manjimup, whose owners, Ian and April Pianta, also founded coffee roaster Southern Roasting Co.

Meanwhile if you’re a tea lover, the Tiny Tea Shop in Nannup is a must on your way back to Perth. Owner and tea merchant, Patsie Smith stocks specialty teas from around the globe in her charming store thathas celebrities among its fan base. And for sit-down dining with a view, family-owned winery, Hidden River Estate in Pemberton is hard to beat.

Overlooking rolling hills, karri forest and avocado farms, dishes prepared by owner-chef Ardal Nigg offer an international twist to local flavours. Specialising in the production of cool-climate wines such as pinot noir, chardonnay and sparkling, most of the region’s 50-plus wineries are boutique, artisanal or family-owned such as Below & Above, Chateau June Jerome, Truffle Hill Wines and Picardy. Combine some of these with picturesque views and farm produce experiences by following the self-drive Southern Forests Wine Trail or book a wine tour with Pemberton Discovery Tours. 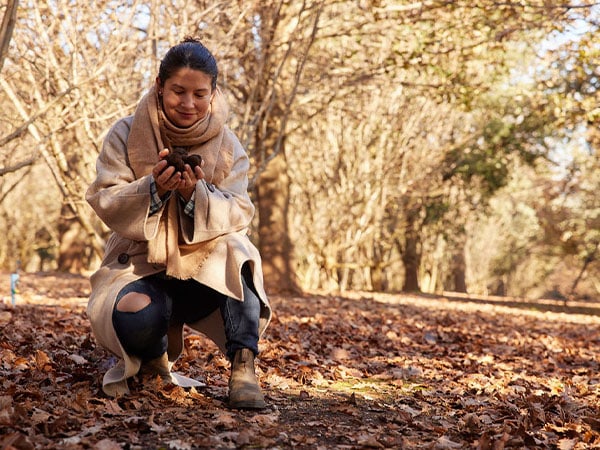 Truffle Kerfuffle is held annually in winter, with other worthy festivals including Manjimpu Cheery Harmony Festival in summer and Pinot Picnic in April. Bridgetown’s Fridgetown is another winter festival, with Nannup Music Festival held each March.