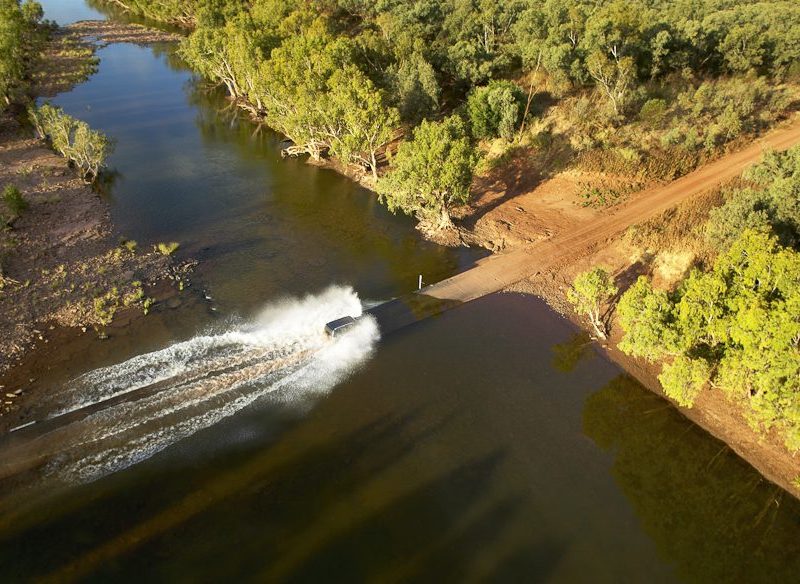 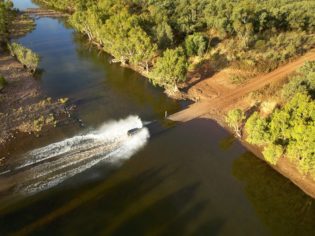 Australian Traveller looks at the Overlander’s and Savannah Way, one of Australia’s 10 Greatest Outback Journeys.

A quick farewell glance in the rear view mirror when leaving Townsville and before you know it you’ve begun your Overland and Savannah Way adventures – combining two of Australia’s great outback trails into a single 2235km journey across the northeastern corner of the continent from Townsville to the NT border via iconic outback Mt Isa, before looping back east to Cairns.

Heading southwest along the Flinders Highway (The Overlander’s Way) to Hughenden, you can test your singing or sportsmanship skills at the old gold mining town of Charters Towers – once Queensland’s second-largest city, now host to Australia’s largest amateur cricket carnival and music quest. Pause at the Burra Range lookout on your way through White Mountains National Park. At the strategically placed Torrens Creek you can learn about the WWII Coral Sea battle when the town became a supply dump for explosives, which was accidentally blown up by US soldiers.

After a quick stop at Qld’s Prairie Hotel to ease the hunger pangs, you’ll have made it to Hughenden, where you can take a prehistoric walk through the Flinders Discovery Centre or snap a photo with Mutt, the life-sized Muttaburrasaurus model. Hit up a 4WD track and finish the day off with a sunset at MountWalkeror the stunning Porcupine Gorge.

You’ll need all your rest, though, because your next major stop will be Mount Isa – but on the way be sure to drop in on Richmond (for some fossil fossicking), Julia Creek with its famous Dirt ‘n’ Dust Festival each April, and Cloncurry – home of the Royal Flying Doctor Service with its memorial to founder John Flynn.

While inMountIsa, raise your Akubras to the largest rodeo in the Southern Hemisphere. One of the largest producers of copper ore inAustralia, Isa is considered the Rodeo Capital of Australia and has always been a town renowned for its outback welcome. With 900km clocked on the odometer, you’ve roughly reached the halfway mark in your Overland Savannah adventure, and as Queensland Rail so aptly puts it: “You’re not a real Aussie till you’ve been to the Isa.”

Travelling two hours west along Tojo’s Highway (locals’ nickname) to Camooweal, just 12km shy of the NT border, this once lively drovers’ centre is Queensland’s most westerly town. Skim the border as you head north to Burketown via Gregory Downs, where you can rent a canoe year-round and spend the night camping next to the river.

Some 120km later, you’ll have finally joined up with the legendary nation-spanning Savannah Way– just before rolling into Burketown, the self-titled Barramundi Capital of Australia. Outside its annual fishing championships, this small town on the Albert River with its lonely salt plains is a peaceful divider between the wetlands and the magnificent Savannah grasslands.

Heading east to Normanton (winner ofTidyTown’s Friendliest Town 2007), you’re now deep in Savannah Gulf territory. And, after posing alongside Krys the Savannah King, Normanton’s statuesque 8.63m tribute to the largest estuarine croc ever captured, it’s all aboard the historic Gulflander train for 152km of scenic bliss. (It eventually returns for those who left their car in Normanton.)

If you’re driving the whole way, stop in for some wetland scenery and wildlife at Karumba, a primary player in the Gulf’s prawning and fishing industry, then back on course for your lunch date in Croydon, another ex-goldmining town. Once pastGeorgetown, a booming goldmining town in the 1800s, you’ll be delighted to reachMountSurprise, where you can take a family friendly half-day gem fields tour.

With souvenirs and memories well in hand, you’re now on your final leg toCairns. Spend a night camping in theUndaraVolcanicNational Parkand explore by guided tour one of the longest lava cave tubes in the world. Then, once on the home stretch, take a dip in the Innot Hot Springs, just west of the Atherton Tablelands, and finish your outback adventure in sunnyCairns.

Who got there first? // Matthew Flinders first charted the Gulf Coast in 1802, but it was Captain J Lort Stokes who retraced his steps and discovered the Albert River, sailing down it and first spotting the grasslands he called the “the plains of promise”. Ludwig Leichhardt explored the area next in 1848, 12 years before Burke and Wills. However, it was Frederick Walker and William Landsborough (when searching for Burke and Wills) who opened up the whole Gulf area.

Don’t miss // The astonishing Morning Glory in the Gulf of Carpentaria, a 1000km-long cloud formation that rolls across the sky from Sept-Nov. Best seen from Burketown.

Drive time // Total distance, 2235km. This type of trip has a lot to do and see so there’s no point rushing it. Spend at least a good two to three weeks experiencing everything it has to offer.

1. Some parts of the Gulf Savannah suffer from lack of road infrastructure, so be particularly careful during monsoonal season.

2. Before bushwalking, especially in remote areas like the White Mountains NP, tell someone where you’re going, when and your expected return.

3. Remember to report any sealed roads on your travels that you consider to be particularly unroadworthy to the RACQ (www.racq.com.au).

4. 4WDs aren’t invincible, so be careful with any deep creek crossings – if water gets into the air intake, it’s game over for your engine.

5. Invest in a “snatchem strap” for extraction from muddy or boggy roads (if there’s another vehicle nearby, that is).

Accessibility // Most of the roads along the Overland Way and Savannah Way are sealed – and even the un-sealed ones are definitely accessible for a standard vehicle. However, there are some pretty spectacular 4WD tracks that a regular car won’t be able to handle.

Did you know? // Broadly speaking, there are two seasons in this part of Queensland: April to September is dry/winter and October to March is wet/summer.

1. Burke and Wills roadhouse // The site of the explorers’ last northern camp, halfway between Cloncurry and Normanton on the Matilda Hwy.

2. Hell’s Gate // 50km east of the NT border and gateway to the Macassan coast. Explore Aboriginal art and don’t miss the Hell’s Gate Roadhouse, which has everything from food supplies to a limited mechanical workshop.