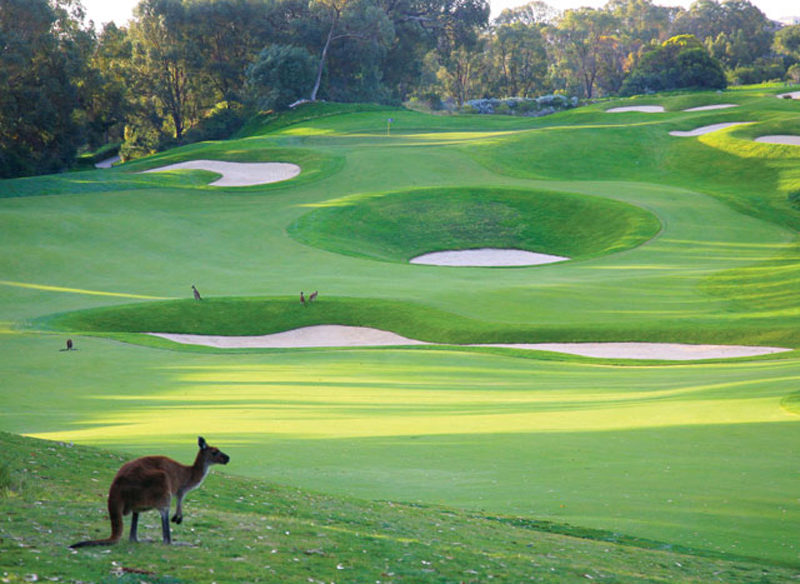 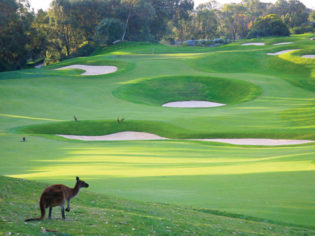 AT stalwart and serial golfing maniac Matt Cleary drove around Australia for four months, playing golf every second day along the way (hey, someone had to). So who better to ask for a whirlwind tour of courses you just have to love? If you are a vacationer who enjoys golf in the time off you have, you might want to keep reading. 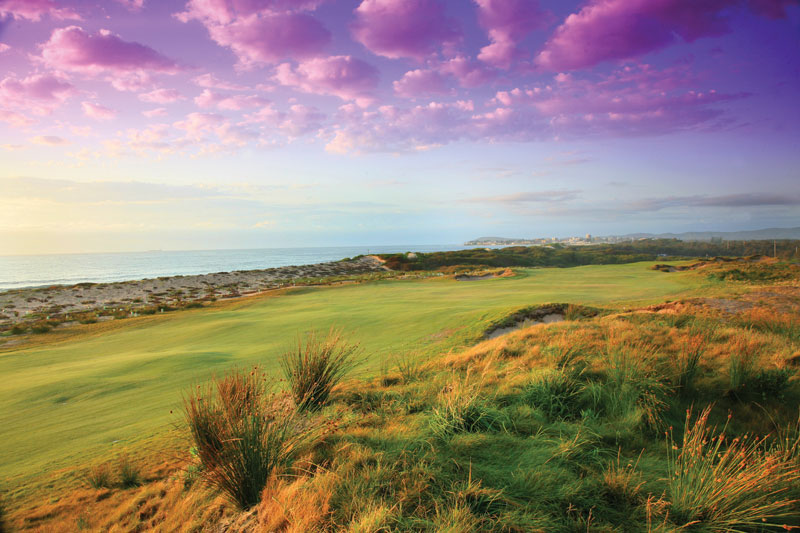 If Magenta Shores was an actress, it would be Raquel Welch in One Million Years BC: gorgeous, wild, desirable and “a savage world whose only law was lust!” (True, barring the lust/law thing.) Yet if Magenta Shores wants to hurt you – and when the wind is up it can, friend, it can – it possesses myriad methods. The bunkers, like Kris Kristofferson, are hairy and deep. The greens, like disco floors, are hard. The fairways meander between grassy dunes like velvet tongues through herds of longhaired highland yaks. This dune-side devil will test your golf like calculus tests fifth graders. Just play it. 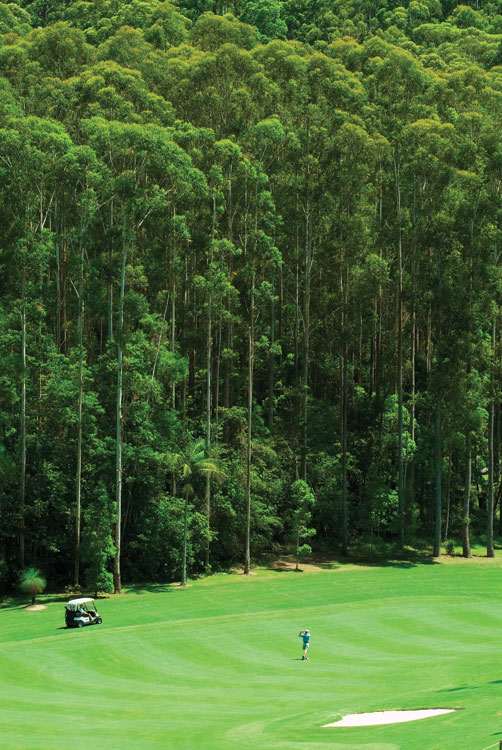 The perfection of Augusta-like Bonville and its rows of majestic gumtrees.

If Bonville was an actress, it would be Jessica Alba: possibly the most beautiful thing you have ever seen. Designed in homage to Augusta, of US Masters fame, Bonville is all super-tall thin eucalypts, grass trees and koalas, with crystal streams crossing fairways lined by sub-tropical jungle. Just south of Coffs Harbour, Bonville was carved from a rainforest of Flooded Gums and is as close to playing Augusta as you’ll ever get in Australia.

If New South Wales GC was an actress, it would be Meryl Streep: brilliant, theatrical, high-brow, up itself. Yet the club’s tickets on itself come with good reason. It’s one of the best golf courses in the world and listed in every golf worthy’s Australian Top-3 (with Royal Melbourne West and Kingston Heath). A couple of years ago I was on the fifth fairway with Stuart Appleby during a photo shoot. Such was the roaring fury of the sou’easter, Appleby could not reach the green from 100m, facing downhill, with a full 7-iron. Later we moved to the tee of the iconic par-3 sixth, with its water carry over Curwee Cove. As huge waves crashed against the cliffs and the photo girls twittered around Appleby like honey-lovin’ bees, a couple of Blackhawks choppered past up the coast. Nobody blinked. It’s that sort of golf course. (That said, you have to hock a kidney to play it; so look next door at St Michael’s, where for $40 you can play their Open Day without losing much in the way of water views and challenge.)

The Ewan McGregor of golf courses, Mt Broughton in the NSW Southern Highlands

If Mt Broughton was an actor, it would be Ewan McGregor: interesting, unusual, with a twinkle in the eye and a hint of Scottish Highlands. Calling Mt Broughton an inland links might be oxymoronic (links courses by definition are built on dunes between the ocean and arable land), but it’s still a super fun track. Lined by long white death grass (for your balls and for you, golfer, if you tread on a red bellied black snake) and very occasional trees because they got rid of them. Respect.

If Federal was an actress, it would be Sigrid Thornton: pretty, established, with a familiarity you know and trust. Federal in the ACT is where I learned etiquette at the teat of my forefather (hence why it gets a gig over Royal Canberra) and is fun like a beer with a favourite uncle. With kangaroos.

If Brookwater was a former tennis player and model, it would be Anna Kournikova: jaw-droppingly desirable with a look in its eye that says you cannot afford me. (Though you can.) And while it’s a shame to pick just one course from the great golf state of Qld – Coolum, Hope Island, Sanctuary Cove (Pines) and Lakelands are all tops – Brookwater is my pick of the litter. Long and lovely, tricky and tough, it’s designed by Greg Norman, run by the clever people of Troon Golf (who rightly treat like a VIP anyone willing to shell out $100 to play), and sits among Springfield’s sclerophyll forest like a bird-filled chunk of golfing goodness. 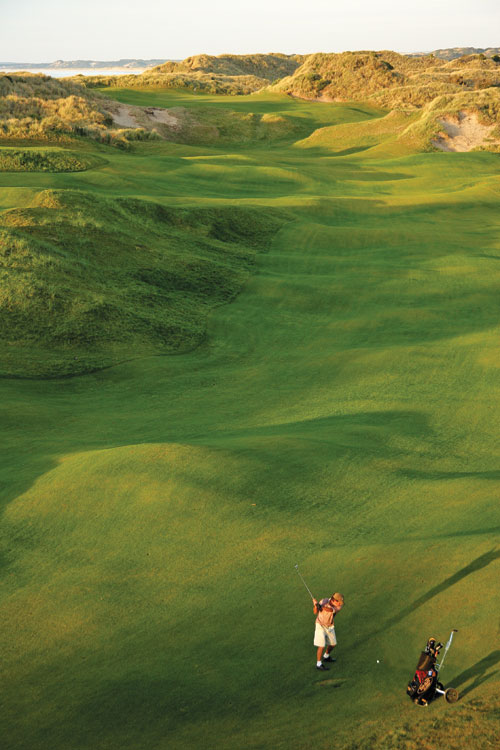 Tasmania’s Barnbougle Dunes was an actress, it would be Angelina Jolie: wild, a bit different, gob-smackingly spectacular in the flesh, and with loads of interesting curves and bumps.

If Barnbougle Dunes was an actress, it would be Angelina Jolie: wild, a bit different, gob-smackingly spectacular in the flesh, and with loads of interesting curves and bumps. The great green beast of Tassie’s northeast is a classic links: sandy dunes; prevailing sea breezes; no trees. Created from a few unused hectares of farmland by a team that included 24-year-old entrepreneur Greg Ramsay, “dumb spud farmer” Richard Sattler, and esteemed course architects Mike Clayton and Tom Doak, Barnbougle is listed in the world’s Top-50 courses, is Australia’s No.1 public access course, has neither golf carts nor members hogging it to their chests like greedy toffs with a trunk full of jewels, and is perched on Bass Strait like a windy, duney piece of green-velvet golf heaven. Do you play golf? You have to play Barnbougle Dunes. It’s an order. From God.

It’s perched on Bass Strait like a windy, duney piece of green-velvet golf heaven. Do you play golf? You have to play Barnbougle Dunes. It’s an order. From God.

If The National was an actress, it would be Cate Blanchett: beautiful, talented, sophisticated and multi-faceted. The National has three courses – Moonah (ranked 8th in Australia), Old (12th) and Ocean (47th) – and they’re all superb. Its practice facilities could host the Institute of Sport. Its clubhouse is a huge cathedral of glass and stone wherein people with white shirts serve fine wine and food. It’s on the water’s edge of Mornington Peninsula, one of the great regions for the great game in Australia. Play it, however you can. 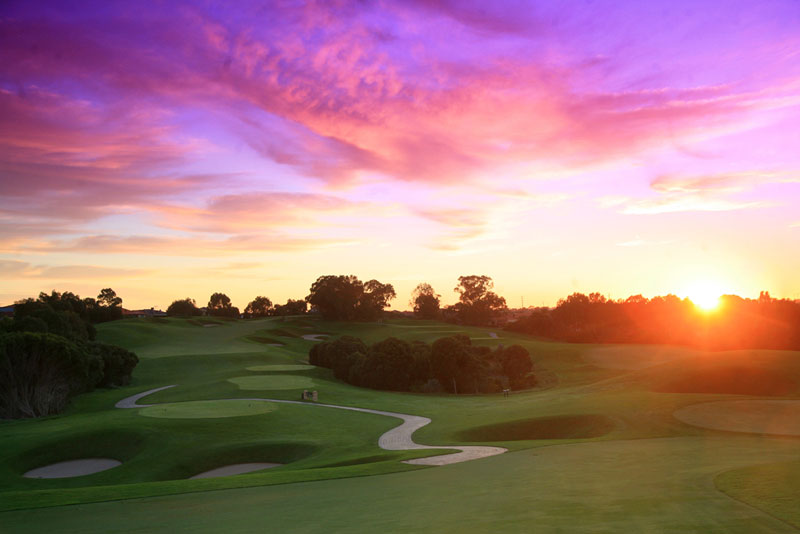 If Joondalup was an actress, it would be Milla Jovovich in The Fifth Element: a beautiful roller-coaster possibly conceived by men on acid. Bunkers like giant moon craters with 20m walls and ladders. Sheer granite cliff faces lining greens. Cathedrals of rock. Deserts of sand. Lakes of fire. Hazards from which fire shoots out. Volcanoes spouting forth huge gobs of lava. Acid rain. You get the drift. It’s a funky course, and though there is no fire or lava (who writes this stuff?), it’s 27 holes of crazy golf action.

If The Cut was an actress, it would be Sharon Stone in Basic Instinct: beautiful, dangerous, untamed and a lesbian. Well, not a lesbian. But when the Freo Doctor roars up from the vast aqua nullius of the Southern Ocean, The Cut can come across a little dangerous, with a look in its eye that says, “Take me on – if you dare”. It’s a sensational track. Rolling bowls. Wind-polished hard fairways. Greens of truth and justice. The town of Mandurah might come across a little White Shoe Brigade, with its giant boats and McMansions, but The Cut is one of the best courses in the country (and, despite suggestions to the contrary, does not have a silent “n” in its name).