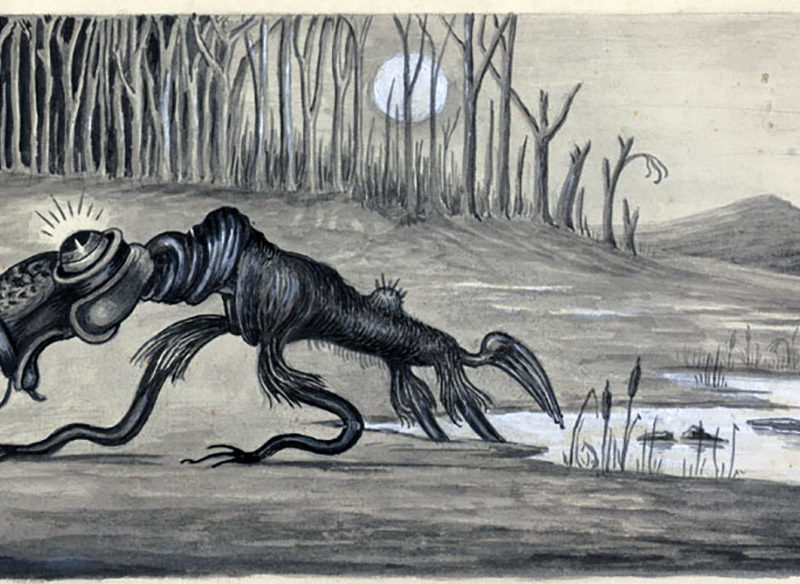 The Australian outback is home to as many tall stories and fallacies as it is feral camels (more than a million, at last count). But which are true, and which are merely folklore? AT rates these as its top five from the myths and legends vault. By Craig Roberts

1. The Bunyip: Don’t stray too close to the billabong

Unfamiliar to the sights an alien environment, early European settlers quickly took to the idea of a Bunyip being a new creature waiting to be discovered, and set out on foolish attempts to find one in the hope of fame and riches. To various local Aboriginal tribes, this wasn’t the case; the Bunyip was a malevolent force that lurked at the bottom of creeks and billabongs, ready to devour anyone silly enough to wander down at the wrong time. (At least this was the line used on wayward children.)

Like any good folkloric tale, the Bunyip legend has been fuelled by unsubstantiated sightings and incompatible facts. Bunyips have been reported to have horse’s manes, dog faces, flippers, fangs, tusks, one eye, two eyes, shaggy fur, short hair, horns, and to be variously as big as a horse and as small as a dog. All very confusing. What we know for certain is that this is one myth that has been embraced by Indigenous and non-Indigenous Australians alike.

Some say the legend of the Bunyip stems from Aboriginal ancestral memories of the Diprotodon australis, a three-tonne, bear-like creature that was the biggest marsupial in existence – before it became extinct around 40,000 years ago.

We all know the joke; we’ve all pulled the punch line. Usually on some newly arrived tourist, terrified of a country filled with man-eating sharks, killer crocs and venomous snakes. So what’s the harm to add one more? Even better, why not take our fluffiest, and thus cutest, creature, the snuggleriffic koala, and turn him into a remorseless widow-maker with a taste for the sweet, sweet tang of human flesh?

For those who don’t know the details, get up to speed here and remember a few basics, in case anyone with an accent asks: Drop Bears are related to koalas, although they’re slightly darker with blood-dripping fangs, and they hunt at night.

Here at AT we have no ethical qualms whatsoever in suggesting to British backpackers that vegemite smeared liberally on the face is the only effective deterrent for Drop Bears.

Given that every other continent worth its salt has a huge and intricate internal river system, early European settlers theorised thatAustraliamust surely have one too. And since Australian rivers flowed inland, the question rang out: where was all this water being stored? There must be a giant Mediterranean-sized sea in the deep, dark interior.

This presumption was so great that it gave birth to dozens of failed expeditions intoAustralia’s red centre on fruitless searches for water – none more foolhardy than that mounted by Charles Sturt, who departed civilisation with 15 men and a boat.

Sturt became trapped for six months near Milparinka, NSW, and got as far the Simpson Desert before giving up, broken, in temperatures so hot that the party’s lead fell from their pencils, and scurvy blackened skin fell from their mouths.

Not to worry, though. The search continues to this day, but far underground. Speculators are eternally drilling in the hope of finding anotherGreatArtesianBasinthat could allow the desert to flourish with flowing water for generations to come.

The Great Inland Sea inspired several books on the subject, none more ridiculous than Thomas J Maslen’s The Friend of Australia, which managed to contain maps, detailed advice on navigating the sea and rivers and local knowledge of the interior, despite the fact that the author never, EVER set foot on Australian soil.

4. Jandamarra: Che of the outback?

In the 1890s, while working for police in the southern Kimberleys, Jandamarra, an Aboriginal from the Bunuba tribe, helped capture a large group of his own people. But, upon seeing their suffering, Jandamarra rebelled, shot a trooper, freed the captives and stole some guns. The story of an Aboriginal bounty hunter gunning down a white trooper raised local fevers, and soon Jandamarra became the most wanted man in theKimberley.

For nearly three years, Jandamarra lead police and outraged posses of bounty hunters on wild goose chases throughout theKimberley. His hit and run guerrilla raids were the first time European tactics and guns were used against whites, and it was signal that he and his people would not go quietly; they would defend themselves and their lands. His extensive knowledge of the local landscape allowed him to “disappear” at will and helped fuel rumours that he may not have been human at all.

In the end, Jandamarra’s body was decapitated and the head sent toEnglandto be displayed as a trophy.

Just before the turn of the 20th Century, 17-year-old Harold Lasseter set out on foot fromAlice Springsto the WA goldfields to make his fortune. And somewhere along the way he claims to have done so. Only problem was he couldn’t remember where he left it. Thus began the legend of Lasseter’s Reef, a supposed 14-mile long, gold-rich Quartz-Ironstone outcrop somewhere west ofAlice.

Since then, many have wandered into the desert with visions of uncovering its vast riches. Lasseter himself died some 30 years later on just such a journey, in 1931. Many have wasted countless hours, their own fortunes and their sanity on the basis of a kid’s tale. Some have claimed to have already found it – Lutz Frankenfeld, founder of the Alice Springs Beer Can Regatta, reckons he did so back in 1994 and is just waiting to form a joint venture with the right mining company.

More recently, in Nov ‘08, a Mutijulu Elder – who recalls caring for Lasseter out in the desert before he perished – also passed away, severing what could be the final link to the lost reef of gold.

Facing bankruptcy, the South Australian Government funded Lasseter’s last expedition, not because they thought he was right, but in hopes that the subsequent gold fever would see many of the unemployed leave Adelaide.