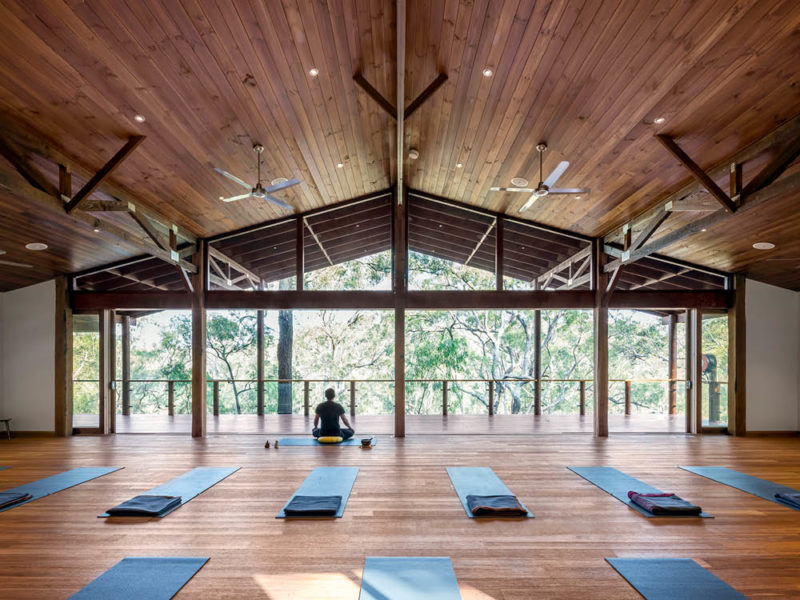 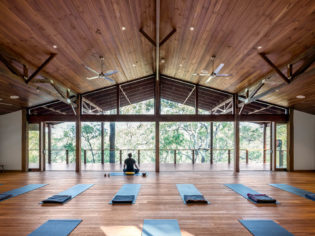 Enjoy a yoga class with views of a billabong at Billabong Retreat, Maralyla, NSW.

If your mind, body and soul are in serious need of some TLC but so is your bank balance, check out these affordable wellness retreats around the country.

Relaxing, re-energising, and sometimes even emotional. Wellness retreats can be all of these things, but, let’s face it, they can also be expensive.

With that said, affordable retreats do in fact exist. There are retreats that, come bill-settling time, won’t see your newfound calm swept out the window. Even better, you can find them in Australia.
You just have to know where to look. Or, we can help you.

A stay at Happy Buddha Retreats in the Blue Mountains will leave you with a whole new understanding of the word mindful. The retreat uses drumming circles, sharing circles, and meditation talks to teach you how to better get out of your head and into the present. Yoga classes and self-guided walks, including a stroll to a nearby waterfall, are of course on offer here too. As are homemade meals, each beginning with chef Khanh explaining her delicious creations in detail – an act that does wonders for mindful eating.

The cost: Prices start at $299 per person for two nights mid-week and include all meals, workshops and yoga classes.

Relax by the pool at Happy Buddha Retreats.

Take a stroll to the nearby waterfall at Happy Buddha Retreat.

They say it takes 21 days to break a bad habit, but at Kangaroo Island Health Retreat on Kangaroo Island, the aim is to have it reset in just seven days. Its Dynamic Detox program was designed for a complete lifestyle change, and sees you fed only tonic pastes and soup for its first four days before moving you onto whole foods. Rest assured, any memory of hunger pangs will be long forgotten when you bounce out the door, thoroughly cleansed.

The cost: Prices start at $2999 for a week-long retreat. Admittedly on the pricier end, but when you consider it includes nutrition and anatomy lectures, culinary lessons and Pilates classes and works out to just $428 a day, not so much.

With yoga classes led by a teacher who has over 40,000 hours of practice under his belt, you know you’re in good hands at Griffins Hill Yoga Retreat. Set on 2.5 hectares of garden, and nestled in the Southern Grampians three hours from Melbourne, the retreat runs three-, five- and six-day programs. The focus here is on Igengar yoga, a form of Hatha yoga that emphasises detail, precision and alignment. In between classes, lace up your boots for a mountain walk, book a massage or check out a nearby cafe or restaurant.

The cost: Prices start at $690 per person for the weekend for a twin-share room. If you aren’t with a friend or partner, the retreat will pair you with someone (private king rooms for one guest start from $990 for the weekend). The rate includes all meals and yoga classes.

For a DIT-style retreat, book into the Daintree Ecolodge. Photo: Simon Shiff

While local culture, nature and indulgence-themed packages are on offer at Daintree Ecolodge, the hotel is, for the most part, more of a DIY-style retreat. Start by picking your room, choosing from lagoon, canopy or rainforest-facing options, before then moving on to your activities. And from cooking demonstrations and degustation dinners to 4WD tours and Daintree Rainforest adventures, you won’t be short on choice. Always a plus, the resort is incredibly sustainable so as you connect with nature, you can be sure you aren’t further damaging it.

The cost: Prices start at $380 a night for two people and include breakfast.

Even dining at the Daintree Ecolodge Restaurant is a soothing experience when surrounded by this picturesque scene. Photo: Simon Shiff

Island Indulgence Retreats in South Australia’s Hindmarsh Island marina is the brainchild of a mother-daughter team of a naturopath and a masseuse. The combination of the two clearly making for a very blissful weekend. Its women-only programs will see you indulging in a facial treatment, hour-long massage and nutrition workshop, all set on a serene waterfront. Also on the agenda are yoga and meditation classes and self-guided kayak tours. Retreats are capped at just eight guests.

The cost: Prices start at $595 per person for the weekend.

The cabins of Billabong Retreat in Maralyla, NSW.

Join in on the yoga classes in the Billabong Retreat Treetop Yoga Room.

Nothing says relaxing retreat more than a bathtub on a balcony. At Billabong Retreat, just 45 minutes from Sydney (or a 10-minute drive from Vineyard train stop), deluxe cabin rooms come equipped with said tubs, perched over a very peaceful billabong. In between soaks, join in a yoga class, indulge in a spa treatment or simply curl up in the common area with a book and blanket. Meals here are served buffet-style and are all-natural and all-healthy.

The cost: Prices start at $250 a night for a bed in a dorm room, including all meals and yoga. Prices for the deluxe cabin room start at $500 per person a night, $700 for two people.

Inside a Billabong Retreat Deluxe Cabin.

The meals at Billabong Retreat are served buffet-style and are all-natural and all-healthy.

Live in Perth or right near it, and only have a day to spare for some quality self-care? Book at Ripple Retreats. In a gorgeous garden in East Fremantle, you’ll learn how to properly breathe and relax, and how to harness the power of positive thinking. By the end of the day, expect to have peeled away at least some of those pesky stress layers, and further cultivated that deep sense of calm and inner peace.

At Rocklyn Yoga Ashram, 90 minutes from Melbourne or 20 minutes from Daylesford, weekend retreats feature the usual yoga class suspects of Hatha and Nidra, as well as the slightly less traditional Karma. Which, if you’re not familiar with, is the kind of yoga that sees you gardening, cooking, and working on sustainable building projects. So, no, not quite the yoga you’re probably used to. Choose from yoga, meditation or cleansing courses. All include a silent meditation walk through the forest, an intro class to different types of meditation, and plenty of time for self-reflection.

The cost: Prices start at $95 per person a night and include all meals and yoga classes.

The best new restaurants to try around Australia

All the best things happening in your state this July

How many people in the world are there who are recognisable by only their first name? Cher, Oprah, Jesus – any others? Well, in the food world, ther...