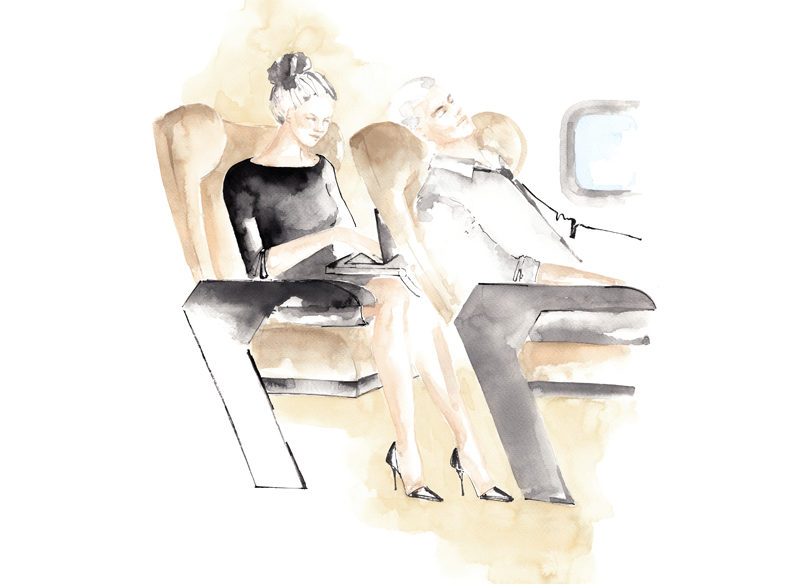 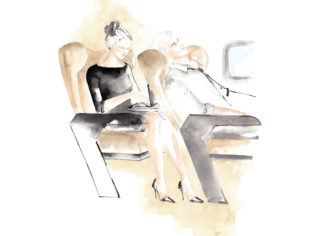 Manners can often disappear above the clouds. We chat to a flight attendant on the frontline of bad behaviour to find out what causes mile-high anxiety.

What is it about soaring above the clouds in a metal bullet that has the capacity to turn a normally rational individual into an unhinged rage monster?

Flying used to be a civilised affair, complete with cocktails and pleasantries. But these days it seems more and more flights teeter on the edge of grudging courtesies and all-out-brawl.

If you’ve been paying attention, you will have noticed an increase in passenger-related disputes popping up in your news feeds.

Most recently, we heard of Grant Hackett and the Nipple-gate fiasco, whereby our great Olympic hope, furious that the (male) passenger in front of him dared to recline, lurched forward to administer a nipple cripple on the unsuspecting recipient.

Hackett has since apologised and admitted being inebriated at the time, but really, does that excuse a mid-flight teat-tweak?

There has also been a proliferation in the US of bad manners en route, including a situation whereby a ‘knee-blocker’ device was employed by a passenger, preventing the person in front from reclining.

The situation escalated to a point where the victim threw a cup of water at the perp and the flight had to be diverted.

What is going on up there? Surely travelling at great speed some 38,000 feet above the ground should engender a we’re-all-in-it-together kind of spirit? Yet it seems tensions increase with altitude.

It used to be that bad behaviour on board was reserved for the Mile High Club and pinching a few extra miniatures from the drinks trolley, but now we’re having hissy fits over where we sit, hogging the overhead compartment, and waging passive-aggressive wars for the armrest.

The need for airlines to effectively keep costs down while not making huge losses has seen an increase in seats on planes.

Thus, the trade-off for low airfares is slightly more cramped conditions, but surely given the choice, most of us would happily sacrifice a few centimetres to save a few dollars.

The sad truth is the glamour of flying is now as lifeless as the in-flight meal and while we expect to scuttle here and there, we don’t seem prepared to acknowledge flying is just another mode of public transport.

Daily commuters learn a certain level of resigned tolerance for the excessive invasion of personal space, but in the air our fuse is shorter.

While the vast majority of flights do hum along to their destination without any animosities, there’s little denying air travel can be a crucible of malcontent, so we wanted to chat to someone who sees it all, from the good to the bad and the earth-shatteringly ugly.

We chat to a real-life Virgin Australia flight attendant, who we’ll call Karen Singleton for the purpose of this article, about what actually happens up there and how we can all be better passengers.

How long have you been a flight attendant with Virgin?

What’s with all the bad behaviour?

KS: There’s a lot of passenger shaming going on at the moment, with people taking videos and photos and sharing them on social media. It’s always difficult to contain that.

Do people generally behave on flights?

KS: The majority do but there’s always one who’s a bit needy. There always seems to be one person that you have to take care of.

What’s the most common cause of bad behaviour between passengers?

KS: It’d have to be anything to do with personal space invasion, such as hogging the arm rest or when people put their feet into the space next to them. Or sometimes a passenger will come up to us and say they can’t sit next to someone because they smell.

Whoa, how do you handle that?

KS: It’s a difficult one, it puts us in an awkward position. I can’t go up to someone and say, “Hey, you smell!” and hurt their feelings. It’s hard when we don’t have an extra seat to move people to.

We can use sprays, or there is an old trick of putting coffee on as it draws out the odour, but you have to be discreet about it. The last thing we want is an altercation.

Are there any hygiene issues from travellers that surprise you?

KS: When people go to the toilet with bare feet. You don’t want to be doing that.

At what point do the cabin crew intervene in a dispute between passengers?

KS: If I see two passengers having a heated conversation I ask if I can help, give them suggestions or offer amenities. We’re there to help, we want everybody to get along.

People think they are there by themselves, but we’re 200 or 300 people crammed in and we all have to get along harmoniously.

When is it OK to recline?

KS: Don’t recline during meal service, that’s a courtesy to everyone so they can enjoy the meal. At other times, turn around and see if there is anyone there and if they are working on a laptop or using the tray table.

If they are, ask if it’s OK to put your seat back. Everyone has a right to recline.

Who gets the arm rest?

KS: I’d say the middle person, because there has to be some kind of compensation for that seat. The window seat can lean on the window, and the aisle seat has toilet access.

What do you think makes people intolerant in the air?

KS: It must be that we’re closed in, you can’t open the windows and there is that claustrophobic feeling. Also, people travel for different reasons, someone could be travelling for a funeral and the person next to them for a wedding or holiday. There’s also stress with holidays and getting everyone ready for a trip.

What are your tips for containing the rage when in air?

KS: Just breathe and put yourself in the shoes of the person annoying you. Mental health is a big issue we have on planes, because it’s hard to see.

It’s not visible until people are stressed about things. There are also people who will drink alcohol excessively because they are nervous flyers and all sorts of things.

What’s the best thing passengers can do if a fellow passenger is being aggressive?

KS: Definitely get the attention of the cabin crew, because they have the training, experience and skills to deal with situations.

How can people help the cabin crew?

KS: ‘Please’ and ‘thank you’ go a long way. About 95 per cent of people just say, ‘I’ll have chicken’, instead of saying ‘thank you’. Manners stand out so much for us. It’s crazy, but no one says it.

Anything else we should know?

KS: Treat the crew and the plane with respect; it’s our little home. We’ve had people cut their toenails or peel their sunburn and flick it on the ground. I don’t go to your workplace and do that, so don’t do it in mine.