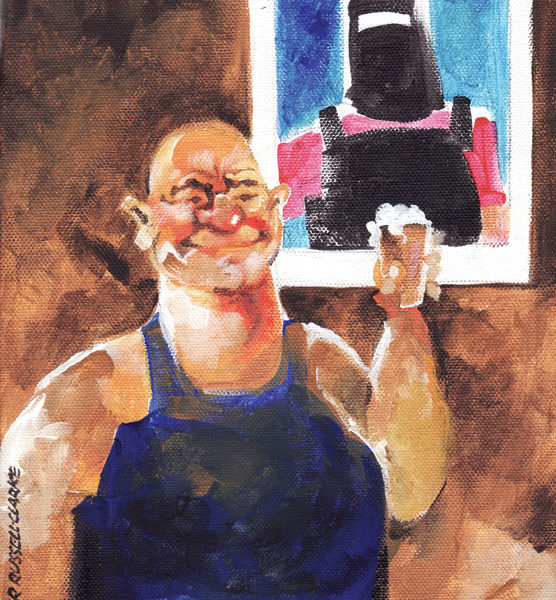 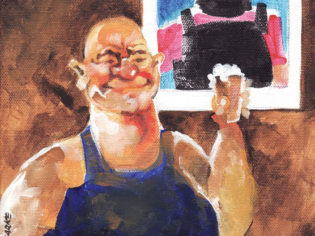 Over a friendly meal with a wandering yarn-spinner, Peter Russell-Clarke learns that the days of the outback outlaw are far from over. They’ve just lowered their sights a little.

I often think about Mad Mac. Sean Macintosh of the Outback was one of those unforgettable rogues. Loveable, but . . . well, different. But then again so were (and still are) quite a few of the outback characters.

Bobby One Leg for instance. He couldn’t read, yet could recite the poem The Highwayman flawlessly. “The road was a ribbon of moonlight across the purple moor,” he’d intone like an Aussie Laurence Olivier. “The highwayman came riding, riding up to the old inn door.”

Then there was Charlie Chop Chop, the Chinese cook who could disguise anything under a wok full of cabbage and water chestnuts. There was Ron the Roo Shooter, who compiled an Aussie Outback Dictionary that he tried to have translated into Japanese in case the lads from Nippon decided to have another crack at taking over the joint. And there was Shirley Temple, the horse breaker. And Jumping Jill, the highway prostitute. They all have fascinating yarns to tell but, in truth, their stories pale into insignificance compared to the stories of their own lives.

But one of the most interesting characters I’ve ever come across was Perc. I didn’t believe the old bushy for a moment, but I had to admit he was entertaining. “My Dad’s great uncle was Ned Kelly’s cook,” he once told me, nodding solemnly. “He was never given credit for keeping the Kelly boys healthy, but without old Claude keeping them regular, goodness knows what sort of mess they would’ve been in.

“Ya see, Ned and his gang couldn’t be stopping any old time for nature’s call, could they?” I nodded that I indeed agreed that they couldn’t. But I confess I wasn’t sure what he meant. “Imagine trying to squat with the weight of that armour draped over ya,” Perc continued. I hoped he wasn’t going to detail what I now perceived were the regular functions he was alluding to.

“Of course, Claude the cook had designed his armour to be more functional than Ned’s,” said Perc. “Instead of plough shields, his armour was his woodfired stove – one of them ones with doors for the ovens and firebox and such. He’d put his stove on whenever armour was needed, an’ when he wanted a pee he’d simply open the appropriate door and he was away. At mealtimes he discarded the stove, reassembled it, lit the fire and cooked their grub. As long as they didn’t have to move quickly, everything was hunky-dory.”

I met Perc at a stopover on the Hume Highway just up the road from Holbrook in south central NSW. I was travelling through to Wagga, then planned to drive across to the Alice and up to Tennant Creek in my trusty motorhome. Perc was towing one of those collapsible tent-trailers with the bed that pops out the back. I’d stopped for a cup of green tea. Perc had stopped because he wanted to stop.

“I often drive around Ned’s old territory,” Perc confided. “Even cook some of old Claude’s recipes. Ya know, Ned Kelly was a beekeeper at one stage. That’s why he moved around a lot. And, of course, why Claude used honey so much.”

I confessed that I hadn’t known, but was intrigued – why did it mean Ned had to move from place to place?

“Well, he had to follow the honey flow, mate. Wherever the blossom was flowering, the bees needed to be right there and right on time, otherwise the bees starved and Ned got no honey.”

“Okay,” I said, pouring Perc a beer. “But if Claude wore his stove, surely all the doors were in the front. Which might be all right for No.1s, but what about No.2s? And what about his helmet? Don’t tell me he wore a saucepan; how would he see? If he’d had eyeholes, the saucepan would leak when being used for more conventional purposes.”

“Claude’s cooking wasn’t conventional, mate,” laughed Perc. “Far bloody from it. An’ ya see, Claude was always running away from danger, so the front of the stove was on his back region. He peed through the flu, which is at the back of the stove. An’ he didn’t need eyeholes in his helmet because, if any threat presented itself, he shut his eyes tight and took off.”

I thought all that through as I poured us both another beer. “Have ya got a red?” asked Perc shyly. “Shiraz f’preference. I’m not big on Pinot Noir. More a sheilas’ drink, eh?”

By now the sun had danced down behind red river gums, which stood sentinel at the end of a billabong in a paddock between us and the river. I’d made some tabouli, which I was thinking of having with a few falafel and hummus. “Would you like to join me?” I asked Perc.

“Bloody oath, mate, whatever it is. An’ I’ve got a coupla chops and some spuds. Ned loved lamb – it was plentiful from over any fence – and spuds were a must for a growing Irish lad.”

And so it happened. The next day we parted after muesli for me and bacon and eggs for Perc. I took my time tidying and stowing away, all the while grinning over Perc and his Kelly yarns. But as I pulled out of the stopover, a police car drew alongside and indicated that I stop. I did.

“G’day, mate,” growled a broad-shouldered copper. “Have you seen a little bloke driving an old Holden Ute towing a campervan?”

“He’s like a bloody gypsy, the little bugger. Nicks hubcaps and spare wheels and anything else not tied down. I see you’ve got no hubcaps, so I thought you might’ve met up with him.”

It was years later that I read about Perc’s death. I was camping by a billabong at Talmalmo, just down from Jingellic. I was reading the local paper. Perc had been arrested for robbery – convicted – but died of a heart attack on his way to the lock-up. Unlike Ned, he beat the gallows.