From ocean to plate: catch and cook on the South Coast 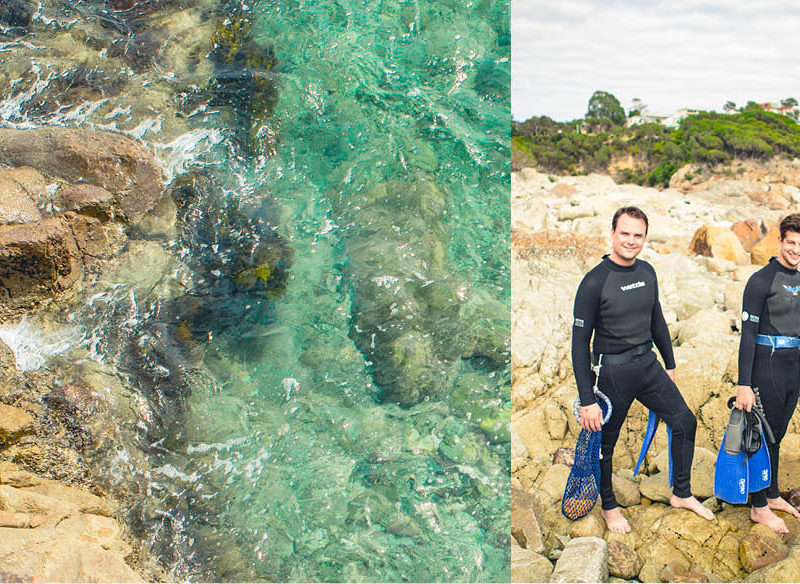 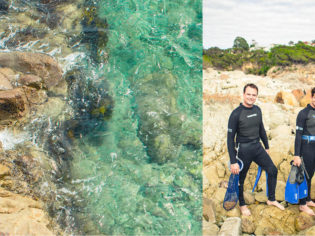 Elisha Kennedy dives into the catch-and-cook philosophy, literally, by taking a hands-on tour through the bountiful waters of NSW’s Far South Coast.

We had always planned to make our road trip to the base of the New South Wales south coast our ‘seafood holiday’. As city-dwellers, my partner and I relished the opportunity to cast our phones aside and drive to a place where the ocean is sapphire blue and you can pick up a dozen delicious oysters from a roadside stall for under $10.

That is our idea of heaven, but we wanted more than just buying our meals – we wanted to physically catch our own. We’re both competent at fishing and were keen to try something more hands-on, but how would we know where to look? What to bring? Or what to do with it when we found it? Easy – ask a local.

Scott Proctor grew up on the Sapphire Coast and has spent a large portion of his life either in the ocean, or learning about it. After studying marine science at the University of Wollongong, he returned to his hometown of Pambula, deciding to share his passion for the sustainable seafood that is available there through his tour company, Australia’s Coastal Wilderness Adventures (ACWA).

Through ACWA, Scott offers small-group marine experiences including snorkelling, prawning and ocean to plate. We chose the ocean-to-plate experience, which incorporates a targeted dive for abalone, lobsters, mussels, crayfish and sea urchins followed by a cook-up of the seafood harvest for lunch. The market value alone to buy this produce is hundreds of dollars, but it was the opportunity to pick the brains of a local marine expert that really had us hooked.

We met Scott at the Eden Visitor Information Centre, and from here he drove us to a remote access point to Twofold Bay. All necessary gear, equipment and a fishing licence is provided and, after kitting up, we clambered over rocks to the shore.

A quick verbal run-through from Scott on snorkelling and breathing techniques, and we were in practising our dives. It doesn’t take long to get the hang of it, and we improved with each resurfacing. When we felt comfortable in depths of several metres, Scott led us further offshore to begin ‘the hunt’. We snorkelled through a changing ocean landscape: rocky walls, seagrass beds and shallow reefs.

The bay was teeming with marine life. On our two-hour dive we encountered wobbegong sharks, eastern rock lobsters, black and red spined urchins, starfish, abalone, blue mussels and a variety of fish species. But only some of those are good eating, and we were after a meal.

The prized abalone hide in crevices, cementing themselves between the curves of rocks in the deep. The smaller ones are plentiful here in the bays of Eden, but the minimum legal size to keep is 11.7 centimetres, and finding the larger ones takes patience. What we were really after were lobsters, and finding them is no easy feat. They’re extremely well camouflaged and surprisingly strong. Scott’s well-trained eye spots them, lying low in the crayweed – given away only by their thin and reddish antennae. A quick and agile grab secured them, and we kept them in netted bags attached to our weight belts. Deeper offshore we found mussel beds, easy enough to twist off the rocks – if you can hold your breath long enough to do so.

Between the three of us we bag two crayfish, four abalone and 40 mussels. Scott chats about the importance of bag limits, encouraging you to take “just enough for lunch”, and he always varies dive locations. “It’s crucial not to harvest too much from the same area,” he tells us. “It might be tempting but it’s not sustainable, for you or the ecology.”

We carted our harvest up the hill to Eden’s Rotary Park lookout, to cook what we would go on to confidently claim as the best meal of our lives. After two hours of intense swimming and diving in the salty ocean we had worked up a healthy appetite and, as we readied lunch together, Scott demonstrated the best ways to prepare and cook our catch.

We couldn’t believe the immense satisfaction and overall sense of wellbeing we gained from a single meal. You haven’t tasted fresh until you’ve eaten seafood that your own hands have plucked out of the ocean and thrown into the frypan in a matter of minutes. Our catch is paired with a local sourdough from Wild Rye’s Baking Co in Pambula and oysters fresh from the Merimbula leases. “It’s so important for me to support the local producers,” Scott explains. “In this way, we’re working together.” Everything we ate for lunch came from the local region – even the tomatoes were grown in Scott’s family’s backyard.

At the end of our ocean-to-plate experience, our bodies felt fit and full. In such a short amount of time we had gained a skillset that could feed us for many meals to come, and that is an invaluable experience.