Close encounters of the creature kind 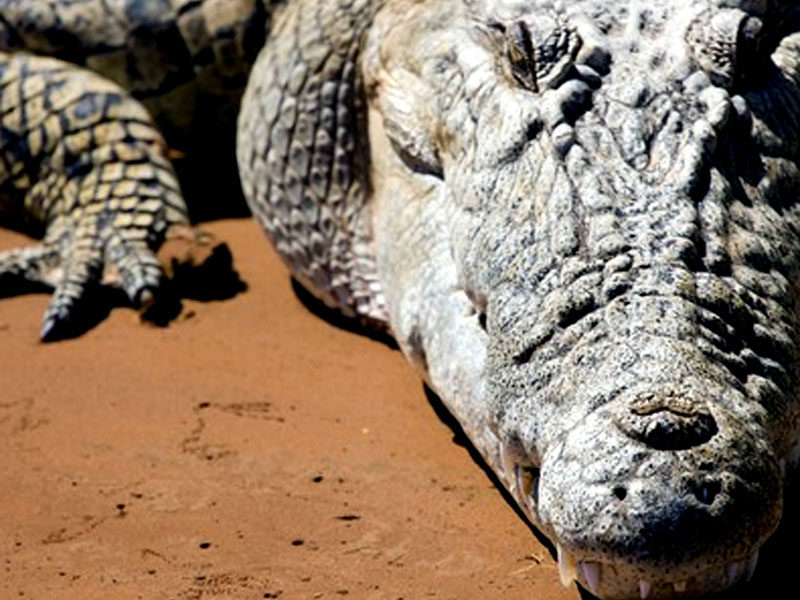 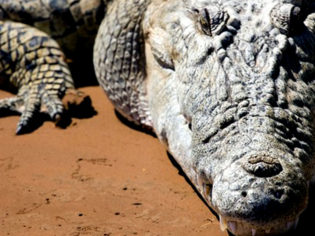 In March 2009, AT published a review of Australia’s Dangerous Creatures For Dummies, a fascinating book co-authored by Graeme Lofts. Now Graeme returns to offer some more in-depth advice on avoiding the many hazards of travelling in Australia.

Exploring Australia by road can take you to sandy beaches, alpine forests, treeless plains, parched deserts, damp rainforests and rolling farmland. The diversity of the landscape is matched by an amazing diversity of creatures. Whether you’re driving, riding, walking, camping, swimming or basking in the sun you just might encounter some of them. Many of these creatures can be a serious health hazard. But take care fellow explorers! The danger is not restricted to the most well-known and deadliest Australian creatures like sharks, crocodiles, stinging jellyfish and snakes.

The danger begins the moment you leave home. Road accidents caused by motorists colliding with or trying to avoid animals on the road are quite common. A recent University of NSW study revealed that during the ten year period between 1996 and 2005 more than 5,000 such accidents occurred in NSW alone, killing 22 people and injuring a further 1700. Kangaroos and wallabies were responsible for about 60 percent of these accidents. Stray horses, cattle and dogs, along with wombats, emus and rabbits also featured in many of the accidents.

Stingrays have had a bad reputation since the tragic death of Steve Irwin in 2006. Yet rays are not generally aggressive and will attack only when they feel threatened.

Road accidents involving native animals are twice as likely to occur at dawn, dusk and during the night when many of them are at their most active and searching for food by the roadside. Road signs indicate stretches of road where animals are known to cross, so take heed of these warnings and slow down. If you are travelling too fast you are more likely to have a serious accident with a tree, ditch or another vehicle while swerving to miss an animal. If you hit a large animal at speed it could be hurled through the windscreen, causing serious injury or death to the driver or front seat passenger – not to mention the unfortunate animal. A kangaroo or feral horse can easily write off a car.

When you stop to take a break from driving or for a picnic lunch, check for ants before you laying a rug on the ground. Bull ants and Jumper Ants (also known as Jumping Jacks) have nasty stings in their tails. For those allergic to their venom a sting can be fatal. Give your rug and jackets that you’ve left on the ground a good shake before you put it back in the car, checking for stinging insects, venomous spiders and other small creatures that might be caught up in them. You don’t want to accidentally pick up an unwanted hitchhiker. Even snakes can find their way into bulky clothing, rugs or picnic baskets while you’re not looking.

Be very wary of bees and wasps when you’re out and about. Their stings are painful and wasps, like bull ants can sting you over and over again. An estimated three percent of Australians are allergic to bee, wasp or ant stings. Allergic reactions vary from rashes and swelling to stomach cramps, difficulty breathing, dizziness, vomiting and diarrhoea. Severe allergic reactions can be fatal. If you’ve had an allergic reaction in the past you should know what to do if you are stung. If you don’t know what to do see your doctor before you travel and find out. If you’ve never been stung before you won’t know whether you’re allergic to insect stings, so you should seek medical help urgently if there are any signs of an allergic reaction.

Australia is a bushwalkers paradise with many trails no more than a few hours drive from our cities. But bushwalking can bring you ‘up close and personal’ with some of Australia’s most dangerous creatures – sometimes a little closer than you would like. Most snakes and many other potentially dangerous creatures will retreat when they hear you coming. So it’s a good idea to make a some noise. Not-so-quiet footsteps and a little conversation will warn animals that you’re nearby. If you’re too quiet you could get too close and startle them, which might cause them to react aggressively. Thongs, sandals and shorts are not appropriate for walking in the bush. Sturdy walking shoes or boots, long trousers and a long-sleeved shirt for protection from bites, particularly from snakes. And keep your hands out of leaf litter, hollow logs and holes in the ground. You might get bitten and you won’t know what bit you, making first aid difficult. If you really want to improve your first aid technic, take on this CPR Certification Cleveland course.

If you’re driving to the beach and feel like a refreshing swim, a ride in the surf or even a walk along a rocky shore there’s always a chance that you’ll meet some nasty customers. The deadliest of these are sharks, but fortunately shark attacks are quite rare. To put the danger of shark attacks into perspective it’s worth remembering that motor accidents in Australia are responsible for an average of about 1500 fatalities per year, while sharks cause an average of about one.

Most shark attacks are avoidable if you follow some simple guidelines:

Don’t surf or swim at beaches known to be sites of shark attacks.

Only use patrolled beaches and swim between the flags.

Swim and surf only in daylight. Sharks are more active at dusk, dawn and during the night.

Don’t swim in murky water. You could be mistaken for shark food.

Never swim with pet dogs. Their erratic splashing could attract a shark.

Avoid swimming or surfing where shark food is likely to be present – for example where people are fishing or near seal colonies and schools of fish.

Stingrays have had a bad reputation since the tragic death of Steve Irwin in 2006. Yet rays are not generally aggressive and will attack only when they feel threatened. If you accidentally step on a stingray while paddling in shallow water it’s likely to shoot its tail up and drive its barbed, venomous spine into you. Fortunately the target is usually your feet or lower legs. The wound is very painful and the venom injected into the wound, causes nausea, vomiting and muscle cramps. So if you’re wading in the shallows, watch your step!

Almost all encounters with dangerous creatures are avoidable. If you behave sensibly, stay alert and heed warning signs while driving, riding, bushwalking or swimming you are unlikely to experience an unpleasant or deadly encounter.

Even a stroll along a rocky shore can be hazardous if you don’t keep your hands out of the rock pools and crevices. Along with the crabs, sea urchins, anemones, sponges and sea snails you might disturb a deadly blue-ringed octopus or a dangerous cone shell. The venom of a blue-ringed octopus can kill a human within minutes. A cone shell fires a venomous harpoon at any creature that dares to provoke it. Its venom is also capable of causing death to humans.

Travelling in the tropical north presents some different dangers – notably the saltwater crocodiles and the deadly box jellyfish. Saltwater crocs can be found in estuaries, along beaches and in the open sea north of the Tropic of Capricorn. Despite their name, they can tolerate freshwater and can also be found in billabongs, creeks and swamps up to 200 kilometres from the sea. Saltwater crocodile attacks are rare but viscous and usually result in serious injuries or death.

Most attacks by crocodiles on humans occur when people:

ignore signs warning of their presence

provoke them by taunting or splashing

interfere with their eggs

If you are camping in the tropical north, to avoid an unwanted close encounter with a croc set up camp at least 50 metres from the water’s edge. Don’t prepare food, wash dishes or clean fish less than 50 metres from the water’s edge and the same distance from your campsite. If you have to collect water from a river, creek or billabong, do it quickly and from a different location each time. A crocodile may be watching and is capable of remembering your movements.

Some of the most beautiful and remote beaches on Australia’s coast are in the tropics. But the presence of the Australian Box Jellyfish makes swimming far too dangerous, especially during the wet season – from about November to April. The Australian Box Jellyfish is the deadliest jellyfish in the world. The pain of its venomous sting is excruciating. Australian Box Jellyfish are transparent and almost impossible to see, which makes them all the more dangerous. At popular beaches, stinger nets are set up during the wet season to protect swimmers. But the deadly Irukanji jellyfish is small enough to get through the holes in stinger nets, so if you can’t resist swimming at tropical beaches – even those with nets, you should wear a stinger suit (or rashie). In the event of a sting, an ambulance should be called immediately.

Before you begin to wonder if a road trip is too dangerous to tackle because of the dangerous wildlife, keep in mind that you could meet many of Australia’s dangerous creatures even without leaving home. Depending on where you live snakes, red-back spiders, funnel web spiders, bees, wasps, bull ants could be encountered in your own back yard.

Almost all encounters with dangerous creatures are avoidable. If you behave sensibly, stay alert and heed warning signs while driving, riding, bushwalking or swimming you are unlikely to experience an unpleasant or deadly encounter. If you’re going on a long trip a knowledge of first aid would come in very handy and could even save your life – or someone else’s. 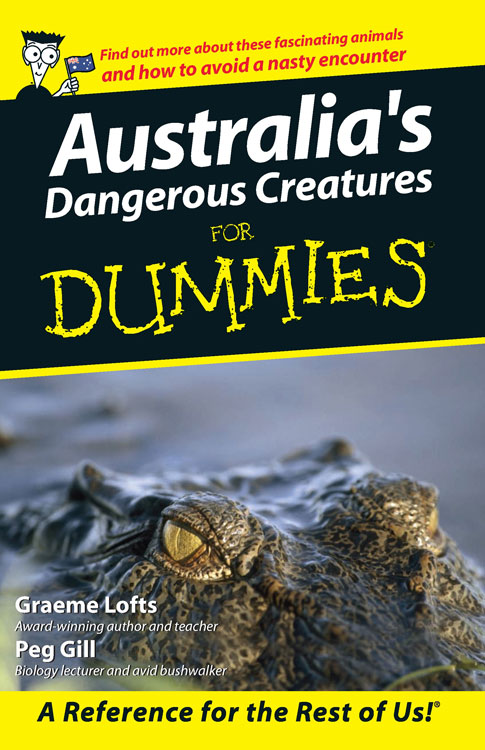 About the author: Graeme Lofts is the co-author of Australia’s Dangerous Creatures for Dummies, published by Wiley Publishing Australia Pty Ltd, $29.95