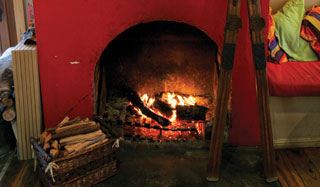 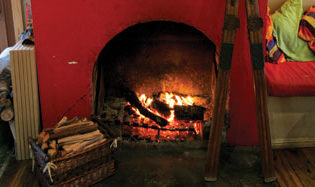 Head inside and snuggle up at these cosy fireside destinations, for a romantic getaway certain to warm the cockles of the coldest heart.

The only good thing about a cold and windy winter day is the pleasure of curling up next to a crackling fireside, a glass of red wine in one hand a special someone in the other. When the weather out side is frightful, but the fire is so delightful, we say head inside to these firesides certain to warm the cockles of the coldest heart.

Myrtleford’s last point of call before the turn off for Falls Creek is The Butter Factory. It’s the perfect place to stop before the air starts to get colder and with a roaring fireplace in the foyer, you definitely want to linger. The bright red brick building sits on a long, buttery history. Cream and butter have been churned on the site since 1893, in 1903 the Myrtleford Butter Factory was created, the current building erected in 1930 and a working factory until 1966. Bronwyn and Naomi Ingelton took over a few years ago, bringing back hand churned butter and a new appreciate for local, fresh food.

The Butter Factory was Michael Ryan’s personal recommendation. Victoria’s king of rural cuisine runs the kitchen at Provenance in nearby Beechworth (where there’s also a roaring fireplace at the front door). In Myrtleford you’ll find comfy couches and a few lucky tables clustered around the hearth. Tuck into hearty coconut and pumpkin soup, with a crusty sourdough covered in hand churned butter. If the fire hasn’t warmed you, the steaming soup certainly will.

The Hero of Waterloo Hotel NSW

In the heart of Sydney there’s a pub with a hearth you’d be hard pressed to ignore. On the corner of Windmill and Lower Fort St, The Hero of Waterloo has been serving patrons for 160 years. The sandstone walls look cold and the wooden chairs not so comfy but the heat from fires dotted around the rooms warm this place up. Live music and Irish dancing gets the blood pumping too.

After thawing out, head downstairs to see the stone tunnel burrowed under the pub. Thought to be the work of rum smugglers or sailor recruiters, the tunnel winds its way to the Harbour. ‘Three pubs on our street had access to the tunnels, we’re the only one still trading today,” says Bar Steward Steve Jones. For a look inside call ahead and talk to the bar staff who’ll show you the entrance to an eerie past.

We say as long as the weather stays cold, you should make the most of it. Head to the ski fields where you can really feel those icy temperatures. Sometimes there’s even a bit of snow hanging around on the slopes. The best part about heading to the snow, apart from hitting the mountain, is getting off it. Ending the day in front of a fire with a strong après drink should be ritualised. At the Thredbo Alpine Hotel the fire pit sits right in the middle of the Lounge Bar and is perfect to crowd around. Get in early to grab one of the seats right up close and settle in for the evening. Live music most days of the week sweetens this cosy corner.

One of our favourite fireplaces has to be at The Louise. Cocoon yourself in a luxury suite with a bottle of wine you picked up at a cellar door earlier in the day and settle in for the evening. Tucked between shiraz vineyards in the Barossa, The Louise is home to award-winning Appellation restaurant. Apart from chef Mark McNamara’s beautiful food, the other draw card is the fireplace on site.

In the countryside around Canberra there are so many firesides an entire festival has been set up to make the most of the winter months. Head to the hearth at Lambert Vineyards in Wamboin on August 7 for Black Diamond Dinners – truffle degustation sounds suitably decadent for a cold winter night.

Poachers Pantry, the place for smoked meats and cured hams, has a pot belly stove that heats the hall and will be hosting fireside dinners through August. The big event has to be Fire Ball on August 20, tickets are just $20 and all proceeds go to the local Pony Club. We love the Pantry’s traditional smoked chicken with tarragon and lemon. Old Saint Luke’s Studio in Gundaroo, a potter’s heaven housed in an old church, has a warming fireside and The Globe Inn, Yass has more than five open fires dotted around their B & B.

If you’re heading down to the ski fields, The Lott Café in Cooma has a great fireplace that’ll ease the chill when you jump out of the car for a meal break.