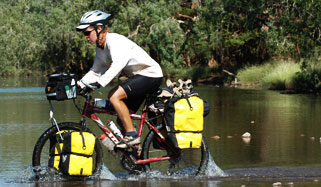 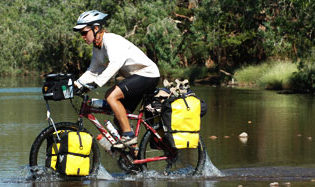 One woman, one bike, one continent – and one sore backside. We sat down with Kate Leeming after she cycled around Australia to find out what keeps her wheels turning.

How would you compare the challenges riding around Australia to your Trans-Siberian ride?

In Russia we were travelling into virtually the unknown. In 1993, the country was undergoing massive political, economic and social upheaval as communism broke down. Prior to this time it was impossible for Westerners to get permission to travel unrestricted within Russia as many regions were “closed”.

Over a distance of 3500km between Halls Creek and Perth, I only had to camp wild (free) four times, the rest of the time I stayed on stations and farms. It was a really special part of the journey. Even on the road, people would stop to see if I needed any water or food.

We always travelled withat least one Russian cyclist to help us with language and general safety. We never had problems finding enough calories, but had extremely limited fresh food and the quality of our diet in Russia was poor. My diet in remote parts of Australia was better, but also far from optimal.

The GRACE Expedition was almost twice the length of the Trans-Siberian Cycle Expedition; 9.5 months versus five months at a similar intensity.

In Russia there was the Swamp – approximately 1500km in eastern Siberia where there were no roads marked on our US air military maps, and where we had to follow the Trans-Siberian railway line to navigate our way through. We travelled for days with freezing, waterlogged feet. The major obstacle in the Australian expedition was the CSR. Almost 2000km in length, it traverses four deserts and approximately 1000 sand dunes. Here I was battling through temperatures in excess of 40 degrees and where the temperature radiating from the sand can reach 60 degrees, burning my feet.

In Russia I was learning more about a very different culture; in Australia I was learning more about my own culture. Interestingly, I learned that the many of the images I had of the Soviet Union during the Cold War were similar to the images our Russian friends had of us during that time. The generosity in both countries, especially in remote regions was constantly humbling.

25,000km. Nine and a half months cycling Around Australia . How many bikes/equipment did you go through?

The same sturdy mountain bike made it all the way; a standard, off-the-peg Giant XTC3 with all suspension removed for maximum strength and ‘bomb-proof’ Tubus rear and front low-rider racks attached.

The Canning Stock Route presented many of the best and worst parts.

I changed the working parts three times; the chain, gear cassette, chainwheel and derailleur, which wear out, especially on the rough tracks. I used high quality tyres – the road tyres were good for over 10 000km, but I went through a fair number of the softer ‘off road’ tyres, which were very fat to deal with the sand and corrugations. It blows people’s minds now if I ride that bike to work with the odometer reading over 27,000km!

Your book Out There and Back features a section on the Canning Stock Route (CSR), during which you write an extensive day-to-day log. Were there days when you were just too tired to write?

I always made an effort to write something, even if it was abbreviated to a few key words and phrases. Looking back over my diaries, especially the CSR entries, it’s apparent just how exhausted I was; some sentences don’t make sense, I’ve forgotten to finish off words or written off the page with an illegible scrawl.

Camping near Well 19, and later at Well 39, I fell asleep sitting upright at the table, mid-sentence.

How do you train yourself physically and mentally to prepare for a journey like this?

After some 30,000km of bicycle travel, prior organising and completing the GRACE Expedition I already had a good idea of what I was getting myself into. Having battled though extreme tiredness, muscular pain and insatiable hunger associated with starting out on previous escapades without adequate preparation, I’d promised myself I’d be better physically prepared for the Australian expedition.

While I maintained my usual good base level of fitness in the gym and did manage to test myself with a couple of longer 130km rides (on my racing bike without 30kg of extra load), my physical training was totally inadequate because the last three months of organising the project (expedition logistics, website, sponsors, education program etc) was manic, especially as I also had to work fulltime.

I was completely exhausted at the start, stressed and suffering from a distinct lack of sleep. However, nothing really ever prepares you anyway for such an intense workload, day after day. The first couple of weeks were a case of biting the bullet; pacing myself, finding a rhythm and developing little techniques to occupy my mind while in the saddle for six to eight hours a day.

What was the best and worst part of your journey?

The best general highlights included: the adventure, the space and time, the simplicity, the clarity of the desert particularly at dawn and dusk, the characters I met along the journey – especially staying on the remote outback stations, the supreme, “indestructible” feeling of fitness, the satisfaction and the natural high at the end of every day’s effort.

The most tedious annoyances included: the flies, a constantly sore backside, headwinds, the rigmarole of packing and unpacking – squeezing everything into four small panniers – wearing the same worn-out, smelly clothes every day, the almost constant veil of tiredness, camping food, and people claiming I was mad without at least trying to understand what I was doing.

The Canning Stock Route presented many of the best and worst parts.

Can you tell us about some of the injuries you sustained on the trip?

I managed to avoid any injury bad enough to stop me for any length of time. There were plenty of minor injuries, which made things uncomfortable. On the third last day I skinned my elbow, wrist, shoulder and hip after a headfirst tumble down a gravel hairpin in the Snowy Mountains.

On the Gunbarrel Highway and the CSR I came off countless times, regularly landing on sharp spinifex spines, which break off under the skin and result in minor infections.

A severe bout of dehydration caused a painful urinary tract infection a few days later and in the south west of WA I was stopped for a couple of days with a violent stomach bug which weakened me for a couple of weeks. In Russia I broke a rib on the Steppe, but continued (in extreme discomfort); it gradually repairing over the next six weeks.

You rode alone for the second half of the trip. How was the solitude compared to having Greg with you?

I asked Greg if he would like to join me for the GRACE Expedition because I knew we were very compatible when it comes to cycling and after the Russian expedition, we knew each other’s strengths, weaknesses and idiosyncrasies well.

Travelling with someone means plenty of give and take, making concessions. While our cycling partnership was very strong, I was eager to head off on my own on the CSR, in my own space and going at my own pace. I enjoyed listening to my own body, not having to deal with any complaints, tensions or snoring.

Meal times in particular can be a bit lonely. Travelling alone down the west coast was not as lonely as one might imagine given the distances between any type on civilisation.

Over a distance of 3500km between Halls Creek and Perth, I only had to camp wild (free) four times, the rest of the time I stayed on stations and farms. It was a really special part of the journey. Even on the road, people would stop to see if I needed any water or food.

What are some tips you’d give for people wanting to start out on some epic bike journeys?

Be sure of what you’d like to achieve and why. If times get tough, knowing the answers to these questions will help pull you through. Spend time researching your journey – type of terrain, expected range of weather conditions, find out where your food and water might come from, culture of the region, political situation etc.

Choose equipment that can cope with the most testing conditions you think you will face. Think of your worst-case scenarios and have a plan to deal with them. Have flexibility within your plan – situations and conditions can change. Try a smaller journey first so that you have some idea of your capabilities. Choose compatible travel companions with like-minded goals.

Were there any moments where you thought “what am I doing?”

When I was lying in the tent very early in the morning, with the promise of another long hot scorcher and a long, lonely road ahead; the tent walls bowing with what was obviously going to be a vicious head wind.

The morning after an extreme bout of dehydration on Day 10 of the CSR when I felt physically exhausted, mentally and emotionally drained. I sat down in the sand as if on strike and had to reason with myself, think the whole challenge of the stock route through.

After just crossing the Nullarbor and 20,000km complete, my husband announced during a phone call that he was going to leave me. This totally knocked the stuffing out of me and I wondered how I was going to exist let alone finish the last 5000km of the expedition.

Do you remember the first bike you ever had?

Not counting the three-wheelers which were handed down from my older brothers and sisters, the first bike I had, I earned by collecting cow and sheep manure and selling it to people who lived in the nearest town to fertilise their gardens. I used to get $7 per ute load and my first bike, a second hand dragster complete with plastic “flower power” seat, all the rage in the ‘70s, was worth four loads of manure.