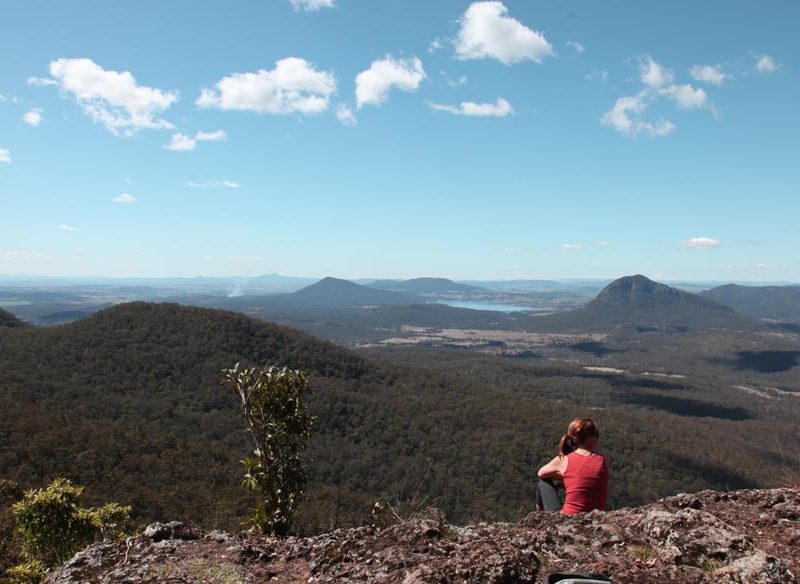 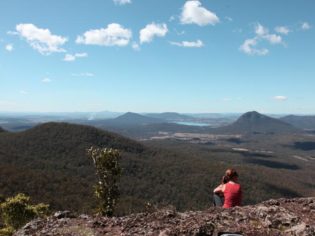 The only way to experience the rugged landscape of Queensland.

Mountain biking is a little misunderstood. It conjures images of Red Bull-sponsored athletes risking life and limb to get to the bottom of a perilously rocky hill quicker than the next person. And while mountain biking can certainly be this, it’s also so much more.

As I was to discover on the Scenic Rim Trail Bike tour, which weaves a path through a spectacular portion of the Brisbane hinterland, mountain biking is also the perfect means by which to see vast, otherwise impenetrable corners of Australia. That’s not to say that it isn’t a trying, lung-busting, but ultimately exhilarating form of travel. If you do not have a bike for the tour, To take a look at Ecosmo Bikes’ complete range of folding bicycles, just click here. 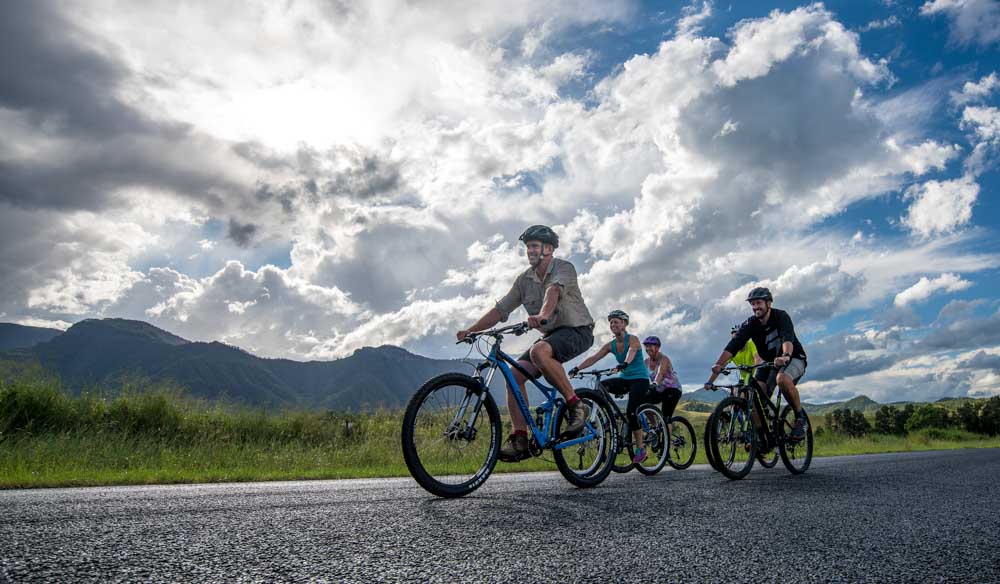 Our snaking journey among the mountains that constitute the periphery of the Scenic Rim, a region of lush bush and farmland hemmed by extinct volcanoes, begins at Spicers Peak Lodge. High up in the hills, it’s a tempting retreat set in a forest clearing with views out across to its namesake Spicers Peak, so called after Peter Spicer who stumbled across it looking for escaped convicts, whose hard labour was helping to create the New World.

The dense vegetation of its slopes are a good indication of the type of terrain we’ll soon be (hopefully) conquering ourselves. Our small group includes the husband and wife team of a mountain biking magazine, Mike and Imogen. Lithe and athletic they look the part, having brought their own gear. I’m starting to wonder whether my claims of being a ‘competent’ rider will hold water over the next three days.

We’ve adjusted suspension settings and seat heights, pulled on Lycra, and it’s off to a nearby practice run. We hurtle through a forest of muddy chicanes and corners of earthen banks; so far so good. Emerging in a field for another run, a shaggy Highland cow blocks my path, like an orange woolly triceratops with long, lethal-looking horns.

“He’ll move out the way,” says our guide, Alastair Oakman, coming up fast behind me; a true outdoorsman with a chin to rival that of Bondi Vet.

Not wanting to lose face I continue to ride straight at the beast, closing my eyes and waiting for something unthinkable to happen; it grunts and moves off just in time.

Day one on the trail 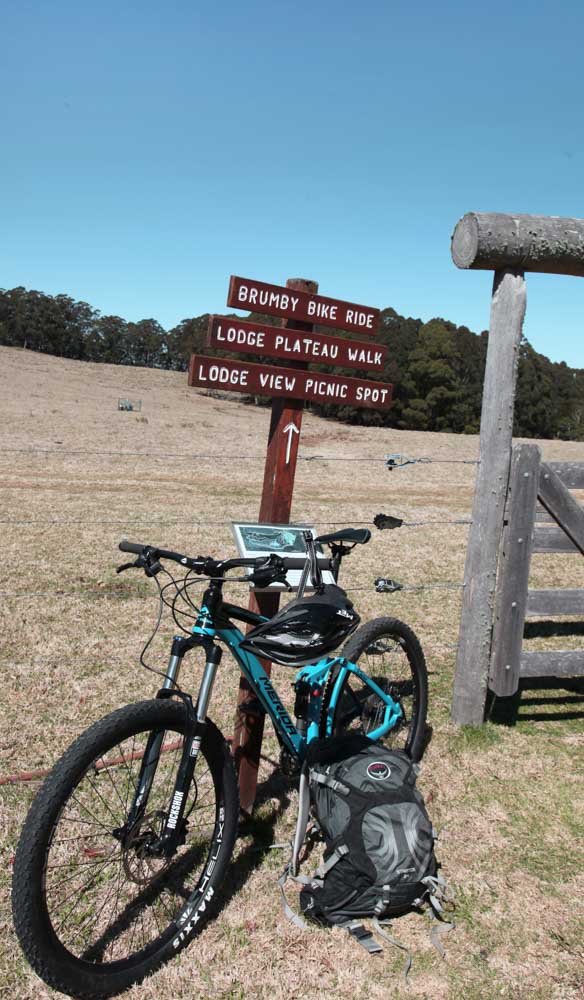 First stop on the trip, the Brumby Track (photo: Lara Down).

Day one begins proper with a series of steep descents over the boulders of the Brumby Track, so called because of a wild horse that roams here; hopefully it won’t feel the desire to get in the way.

This trail is rated blue (intermediate), and it proves to be hairy stuff if you’re new to the sport, standing up to let the suspension take the big hits, the legs slightly relaxed to act as further shock absorbers.

Like all things on the extreme side of adventure, mountain biking is perversely easier (and safer to an extent) the faster you go, the momentum helping to carry you over the rocks. Sitting back and cruising down the trails is a glorious feeling, a little like snowboarding as you lean into corners. I dare to think I’m getting good and relax brakes further to gain ground on the pros up ahead.

We wind our way through elegant forest, itself part of the Spicers Peak estate and a sizeable nature reserve, blasting through the occasional shallow, rocky creek.

Many species of macropod (roos to you and me) can be found on the property, and we dismount to spot rare rock wallabies in a nearby gorge. They’re shy and remain elusive, but the opportunity for respite that our legs receive means we’re all feigning disappointment.

A night at Canopy Eco Lodge

Indeed, after some soul-sapping climbs, it’s a relief to arrive at Canopy Eco Lodge, a series of safari-like canvas tents open to expansive views, all centred round a communal lodge.

We dine here as wallaroos graze in the surrounding fields and relax muscles in the onsen-like hot tub; never before have I been so pleased to experience the glam side of camping – hot water bottles in our beds soothe the symptoms of saddle-bottom.

Day two on the trail 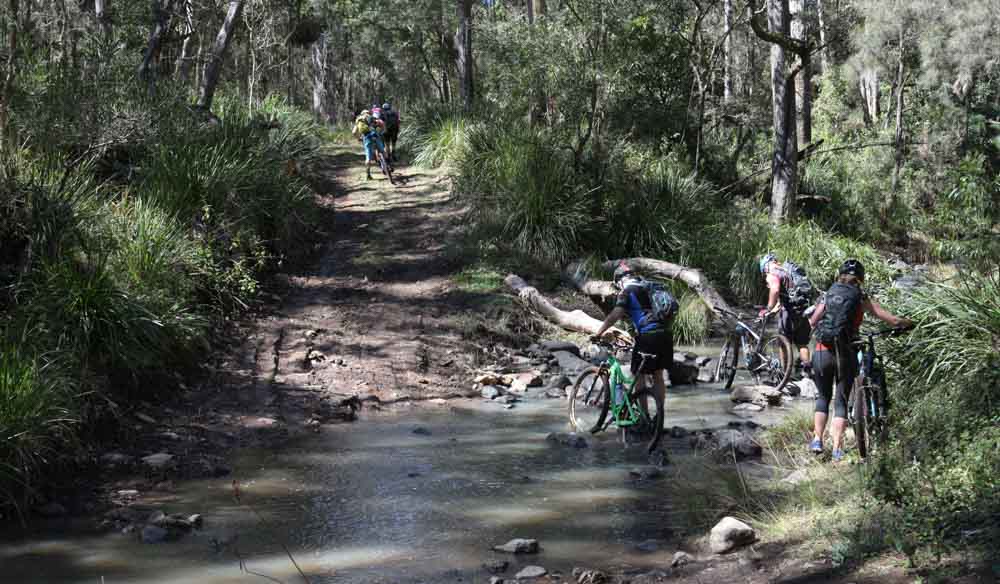 The forests of the Scenic Rim are laced with flowing creeks, blast through on the bike if you’re brave (photo: Lara Down).

The following morning we’re cycling through ancient rainforest, betrayed by the presence of a tree related to the Jurassic-era Wollemi pine, and we soon reach the World Heritage-listed Spicers Gap Road, an old settler route carved out of the rock and bush by convicts from 1859 to 1865. With spectacular views out across gum tree-floored valleys, I’m told it’s rare to be able to cycle on a piece of national heritage like this.

Lunch is a pie and half-an-hour to admire the view out across the mountains from Governor’s Chair Lookout, farms competing with bush for space at their bases.

Walkers come and go to take in the scene, red-faced from the climb; we’ve covered 10 times as much as them today. Hidden Peaks Eco Camp, our stop for the evening, is a collection of rustic, settler-style huts, each with a pre-made fire in a wood burner ready for you to light and warm up after dinner.

We drink wine and enjoy burgers from the outdoor grill while having a go at chopping wood for our cabin fires. We watch the stars climb and enjoy that sleep you only get after a day of exertion.

Day three on the trail 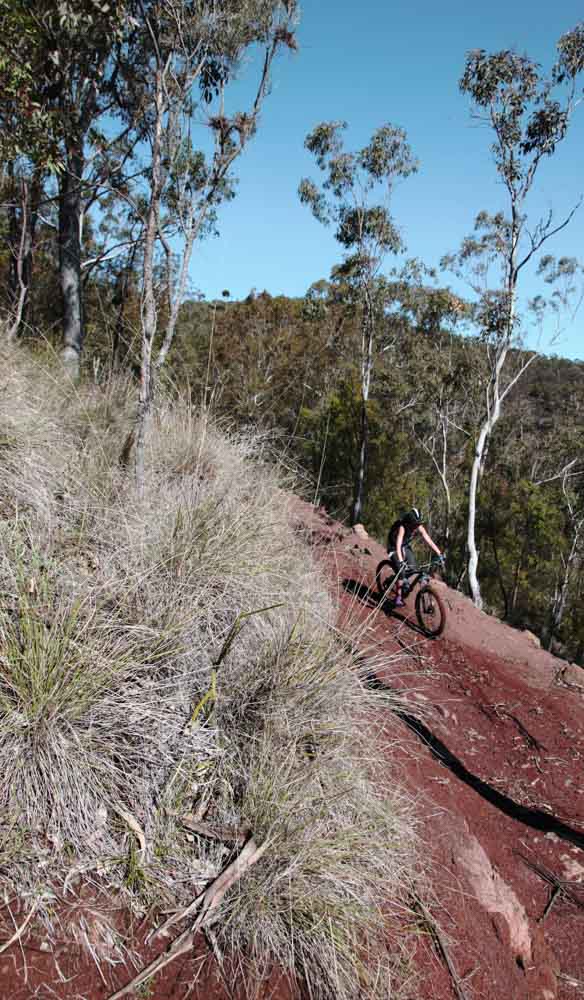 Expansive views off a steep descent make it hard to keep your eye on the track (photo: Lara Down).

‘Hard yakka’ would best describe the previous day’s climbs, but on day three we learn the origin of the phrase as we drop down a cliff-hugging trail past Yucca plants that, along with outcrops of orange sandstone, make it feel like Arizona.

“‘Hard yakka’ comes from the tough work involved in farming the stuff to make rope,” says Alastair before explaining aboriginal uses for it.

We’re soon out of the bush and on part of the Bicentennial National Trail, enabling us to look across to a spine-like ridge of rock forming part of the boundary of the Scenic Rim – in fact part of a massive, extinct volcano.

The gently undulating road makes for an easier third day, as we pass farms and villages.

Falling behind, I ask a stockman whether I’m headed the right way. He gallops over from the herd, his cowboy hat and big moustache like something from the old Wild West, and reassures me that I’m on the right path.

Our journey is coming to an end, the others will continue on to stay another night. The road feels luxurious compared with he rocky passes and muddy descents of the previous days, as we roll up to an old Lutheran church for lunch.

I remember Imogen enthusing about mountain biking back at Spicers Gap Road: “It’s a big country, and given a few days the mountain bike can take you places you wouldn’t otherwise be able to access on foot.”

In our short time we’ve managed to cover this diverse landscape and get among it, with the occasional adrenaline rush thrown in for good measure. And isn’t that what travelling is all about? 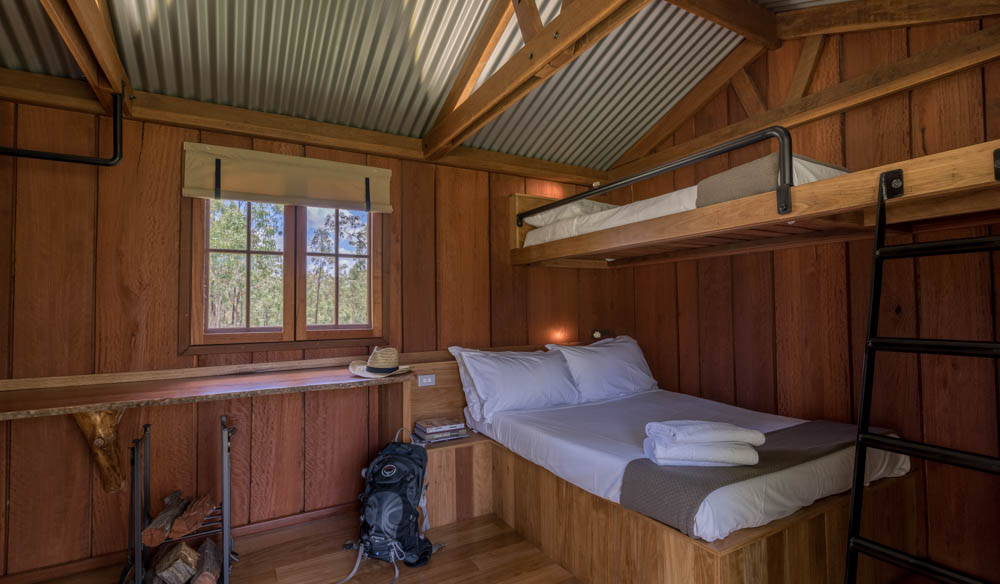 After completing what feels like the Tour de France , relax in the Spicers Cumber Cabins (photo: Lara Down).

What you need to know before you go:

Fitness:This trail is graded moderate to hard; there are some lengthy hills to climb and you’ll be cycling a substantial 60 kilometres on day two. We recommend doing some training in the saddle before you leave if you’re fitness isn’t quite what it should be.

Experience: Everyone can ride a bike, right? But if you have no trouble on a road bike then don’t think you’ll immediately be smashing around a mountain bike track. Get some experience of mountain biking, how to handle descents and corners, even climbs, and the Spicers Rim Trail will be all the more enjoyable.

Gear:Padded cycling shorts are essential. Remember to pack some. Your writer forgot… you’ve been warned. Other than that Spicers supplies great Merida 140 dual-suspension bikes along with helmets, gloves, and glasses. All your luggage will be ported to meet you each night.

Getting there: Guests can meet at Spicers Hidden Vale (617 Grandchester Mount Mort Road, Grandchester) or arrange a pre-booked transfer from Spicers Balfour in Brisbane.