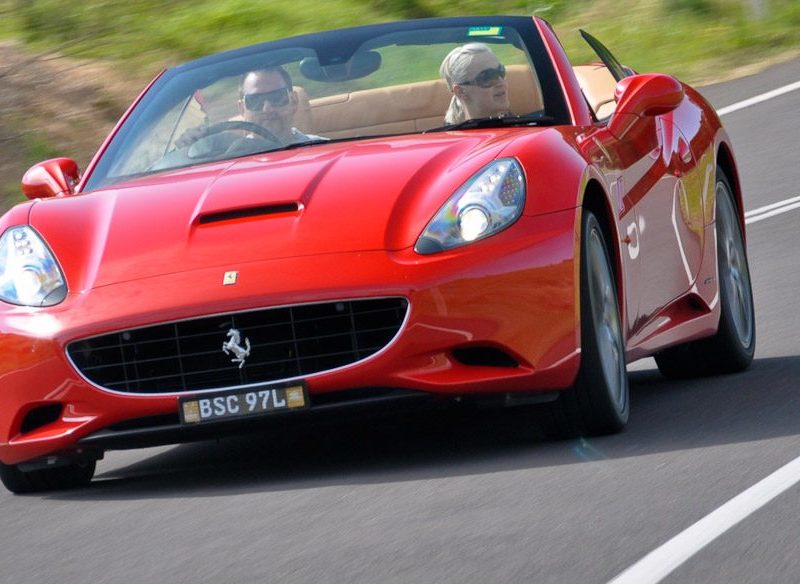 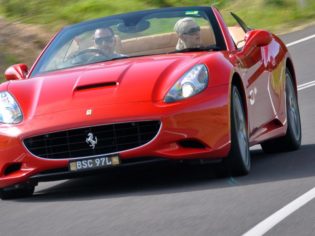 I decided to invite my dad to join me. Dad’s a vet and has never had the chance to drive a Ferrari. A little father-daughter bonding time over an experience that doesn’t come along every day seemed like a special opportunity. We each forked out $990, and as our chosen day approached we felt like two kids who’d won the golden ticket to Willy Wonker’s private garage.

When Australian Traveller asked me to review Prancing Horse I imagined I’d be riding a beautifully trained stallion through the Snowy Mountains, mimicking some romantic fairytale. I was unaware that Prancing Horse’s company name refers to the Ferrari emblem, and that I was in fact to be at the helm of a machine with more horsepower than any animal I could ever dream of riding.

When I think of Italy, I think of George Clooney’s house, Dolce & Gabbana and Napoletana sauce. Let’s face it, knowledge about cars is not part of the average woman’s education. This is not to say I wouldn’t like to learn more. Over the years I’ve watched a couple of episodes of Top Gear, usually by default after relinquishing the remote control, and actually enjoyed them.

Since becoming a Ducati rider I appreciate the feeling of having a powerful engine vibrating between my thighs. It makes you feel alive – yes indeed, ladies! But the closest I’ve come to driving a Ferrari is playing Need for Speed on an Xbox and crashing hopelessly every five seconds.

Prancing Horse runs a Ferrari Drive Experience, where you drive four different Ferraris over 350km along Grand Pacific Drive south of Sydney, through the Royal National Park and into the hinterland. You get behind the wheel of Ferraris such as an F430, a 360 F1 Spider, an F355 Spider and a 328 GTS. Whatever that all means!

The day starts at 7.30am, and as soon as we pull up outside Prancing Horse headquarters in Marrickville, in Sydney’s Inner West, our hearts start beating with excitement. The shiny red Ferraris are all lined up outside like freshly primped children ready for their first day of high school. Inside, we are casually greeted by our hosts, Matt and Robert, and handed a freshly brewed latte. We look round the impressively large garage full of Ferraris of all models and colours – an experience in itself. Then we head upstairs for a briefing and meet our fellow drivers. It’s an intimate affair, with just eight participants on any day. There’s two drivers per car and you rotate drivers, then cars, every 45 minutes.

One of our fellow guests, Geoff, is here for a second time. He did the first drive day with his wife and had such a great time he booked again – this time bringing his son. Garry has flown up from Melbourne after receiving the drive day as a gift from his wife. Vince is quite simply a car nut.

After a quick practice run up and down the street to calm the nerves and sweaty palms, it’s time to start our engines. And I thought the Ducati sounded good.

Winding through city traffic in a Ferrari is exhausting. It’s like trying to ride a wild brumby, or navigate a small child through a shopping centre on a restrainer. It feels like it wants to bolt, and holding it back requires effort and concentration. The car’s power is confronting.

Once we turn onto the freeway to Wollongong, however, everything changes. Oh my God! I haven’t felt this rebellious since wagging school. You can’t help but put your foot down, even just a little, and relish the experience of a vehicle that feels like it could take off from the ground at any moment. Even my Dad yells “woohooooo!” at the top of his lungs – and I’m the one driving!

Driving through the Royal National Park is divine. We chat and laugh as our car effortlessly hugs the winding roads at speed. Although we’re travelling as a group, following a lead car, it’s fun to slow right down then put the pedal to the metal, taking the car to 100km/h in about two seconds. Obeying the speed limits, of course.

We stop for a delicious three-course lunch at SeaBreeze, a restaurant by the water in Kiama. (Salt ’n’ pepper squid is a highlight.) Along the way, people’s fascination with the car is astounding. Perhaps it’s the impressive convoy of red Ferraris as we pull up at traffic lights, engines purring loudly. Or perhaps it’s curiosity about how the other half lives. I know we often turn up our noses at Ferrari drivers, judging them as w**kers with too much money, but maybe it’s just jealousy.

I’m sure many passers-by think I’m the younger girlfriend of some obscenely wealthy middle-aged man as Dad and I pass by. But Dad and I revel in the humour of it all.
We pull into a lookout for an afternoon tea stop. A busload of Japanese tourists immediately turn their attention from the view and furiously start taking our picture – pointing at us like we’re rock stars. And for a day, we feel like we are.

Where: The trip cruises south of Sydney, through the Royal National Park, across the new Sea Cliff Bridge and along the Grand Pacific Drive.

Notes: A Ferrari Drive Day costs $990 per person including lunch, refreshments, fuel and insurance. An Overnight Escape package is also available that adds boutique accommodation, dinner at 1871, a massage and spa package for two and an extended driving route.