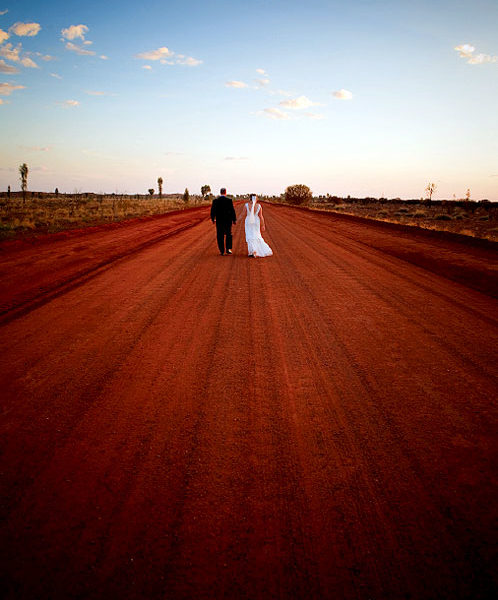 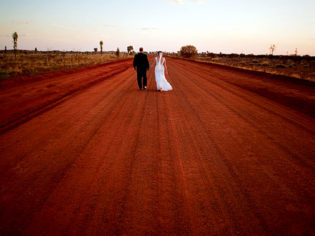 Civil Marriage Celebrant Anita Revel has tied knots in some fantastically remote places in her time. Here she explores some of the most memorable spots in which she and her colleagues have borne witness to those magical words: I do.

It was on the banks of the mighty Pentecost that Hugh and Nicole first smooched in Australia the movie. The river runs right through the Home Valley Station, an onsite training academy for Indigenous men and women from the East Kimberley, an area famous for sparkling pink Argyle diamonds and ochre and violet skies at twilight.

“I have officiated many ceremonies with a didgeridoo being the only beautiful music bouncing off 350-million-year-old cliffs.”

With the river crossing open for just a few months each year, the region is accessible by 4WD only in the dry season (April-Oct). Just because Home Valley is remote, however, doesn’t mean it’s rudimentary. You’ll be won over as you cruise down the driveway between the giant boabs, emerging into an oasis of green lawns, stylish buildings and modern eco-campsites. Their Grass Castles – stylish, self-contained cabins – make perfect honeymoon suites.

Your wedding cars (provided by Home Valley) are gleaming 4WDs with huge tyres. Your ceremony will likely be witnessed (and applauded) by campers enjoying the sunset lighting up the Cockburn Ranges. But that’s all part of the magic.

As you toast your future happiness, gaze up at the stars sparkling from horizon to horizon and be reminded that diamonds are forever. So too will your memories be of this dazzling region.

At Nitmiluk (Katherine Gorge), brides can arrive at the top of the first gorge by helicopter and return to the launching area via water. The mere groom (and the rest of the wedding party) travels by boat 30mins up the Katherine River into the first of 13 gorges. Apart from the occasional “Wow!” not much is said on the way in. All eyes are on the sheer 60m walls that will later act as the perfect acoustic arena for the wedding service at the base of the cliffs.

“I have officiated many ceremonies with a didgeridoo being the only beautiful music bouncing off 350-million-year-old cliffs,” says NT celebrant Nola Sweetman. “They also come in handy for the certificates – no table needed, I always find a rock ledge for the signings.”

The earthy, gold and bronze tones of the gorge also make for stunning photos and ambience. Nothing is more memorable, however, than the bride assuming her position as figurehead on the boat ride home; the water is like a silver ribbon threading its way through the red-tinged cliffs, forming a perfect backdrop for wedding photos at the front of the boat.

3. Stand in an Albert Namatjira Painting

With more than 230 species of birds that call this catchment area home, and a plethora of wildlife roaming the savannah woodlands at twilight, it’s a good idea to fly in to Bamurru Plains during daylight hours.

The nine safari suites of Bamurru Plains luxury bush camp are on a working buffalo station on the floodplains of the Mary River region halfway between Darwin and Kakadu’s hub, Jabiru. The station’s western boundary, the Sampan River, harbours one of the world’s largest crocodile populations, as well as an abundance of Barramundi and Jewfish to keep any fishing addict happy.

Bilawara Lee, a celebrant and Elder of the Larrakia Nation of Darwin, performs wedding ceremonies on the deck of the camp’s main building, as well as a Smoking Ceremony and a Blessing of the Ancestors. Upon request she also brings her brother along to play didgeridoo for the bridal march.

Most couples marry late in the day, mainly to escape the heat, but also to look across the floodplains, the silhouettes of the spiky pandanus trees, the rich and contrasting colours, the roaming wildlife, all infused with the golden light unique to an outback twilight, and feel what it is to stand inside an Albert Namatjira painting.

For a touch of celebrity, head to Silverton 10km west of Broken Hill. The pub and church are two historic buildings featured in close to 100 films, including Mad Max and Priscilla Queen of the Desert.

The town adjoins the Living Desert Reserve and epitomises the picture-perfect nature of the Aussie outback. Here you’ll find the Sculpture Symposium, a series of 12 sandstone sculptures created in 1993 that have been a drawcard for art aficionados ever since.

“Another stunning location is the Mundi Mundi Lookout overlooking the Mundi Mundi Plains all the way to Burke,” says Diane Cotterill, a Broken Hill celebrant. “The vista is so huge you can see that the Earth really is round.”

Diane also recommends the art galleries that outnumber the pubs and feature artists like Pro Hart and Jack Absalom. “Some couples have married in front of The Big Picture, the world’s largest acrylic painting on canvas by a single artist,” she says. “It wraps around the walls of a disused go-cart track, across the ceiling and onto the floors – it’s so big the Silver City Mint built a viewing platform to take it all in.”

5. Give Her the Biggest Rock Of All

Early one Valentine’s Day, Voyages Ayers Rock Resort staff laid 80 white sheets on the Community Oval to form the words, “Will you marry me?” for one of their guests. Just like this region, Australia’s Red Centre, the ensuing aerial marriage proposal was supremely romantic.

Although restrictions imposed by the National Parks Service mean the Uluru-Kata Tjuta National Park is not available for use as a wedding location, there’s a variety of lookouts within the adjoining Yulara township that give magnificent views of The Rock and The Olgas. Bruce McRae, a celebrant for central Australia, says one such location is the Uluru Lookout. “It’s readily accessible but a bit of a climb,” he says. “I recommend brides wear their runners.”

For couples looking for something more unique, the Fire Trail Lookout offers particularly beautiful views of Uluru as it morphs through its famous colour changes at sunrise and sunset.

Couples wanting an intense, spiritual experience in the Red Centre may opt for a full silver service al fresco dining experience at this lookout, complete with a resident stargazer to provide descriptions of the various constellations creating the natural canopy overhead.