Aussie photographers reveal where to take the best outback photos 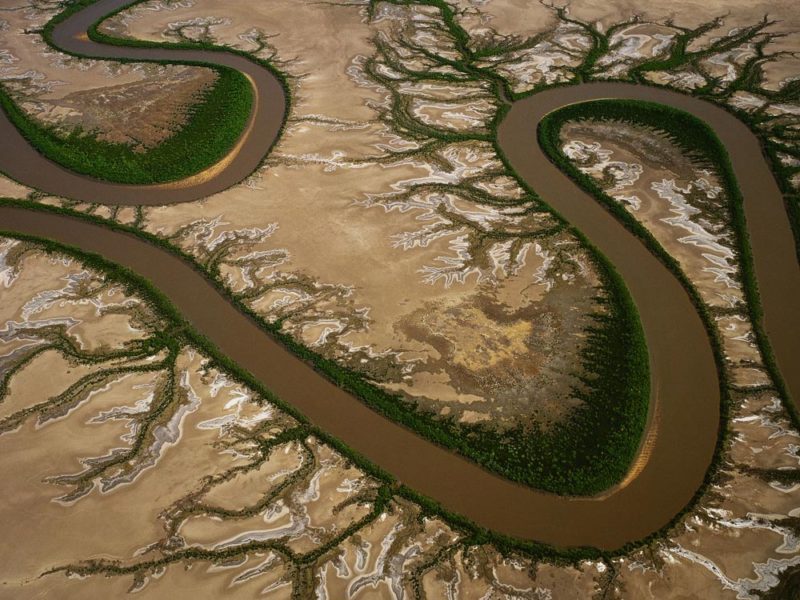 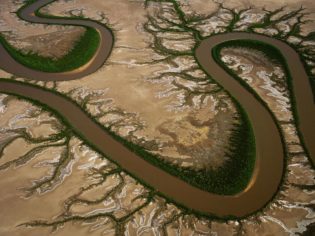 With endless stunning landscapes to choose from, Sol Walkling talks to five prominent Australian photographers about their favourite locations for capturing the essence of the outback.

The outback isn’t just a stunning place to visit, it’s also something of a photographers’ last frontier. Anyone who ever sat freezing in the middle of nowhere, waiting for Uluru to work its early morning magic while hoping not to get camera shake despite forgetting the tripod will understand the incredible pull the outback exerts on photographers.

There are many clichéd photo-ops, but with a little knowledge of places and best times to go, you’ll hopefully be able to get amazing images like these. We rounded up some of our country’s best snappers for an intimate look at the outback through their viewfinders.

When I ask Steve Strike for his favourite places to shoot in the outback, he just laughs. The landscape photographer who has lived in Alice Springs for nearly 30 years says he’d have to kill us (and our readers) if he told us. But after a little begging he acquiesces and names Rainbow Valley, a stunning location about 100 kilometres south of Alice Springs, as a top location for outback shots.

He warns that it’s hard to reach and in a national park, accessible only by 4WD and with few camping facilities. The view at sunset is stunning, whether there’s been recent rain or not. However, Steve’s image taken during a tropical thunderstorm is AT’s favourite. “One day I arrived at about three in the afternoon,” he says. “I saw those storm clouds coming and within 15 minutes I was standing in six inches of rain – under a poncho and shooting.” 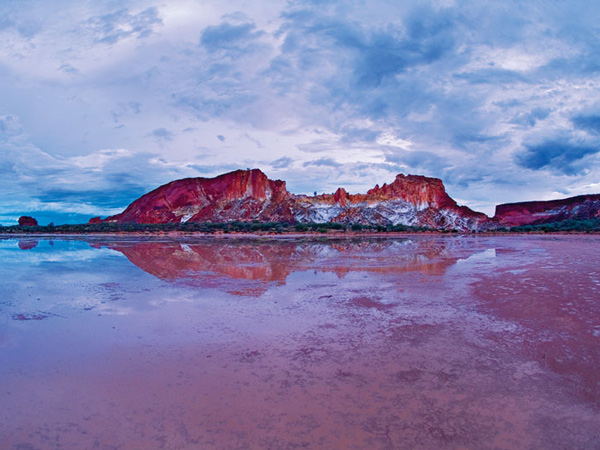 Seeing the outback from the air gives you a unique perspective – and it really shows off the patterns of the landscape, says Richard Woldendorp, who has flown all around Australia for his photography. “Predominantly when I fly over Australia, I always see the red of the soil,” he says. 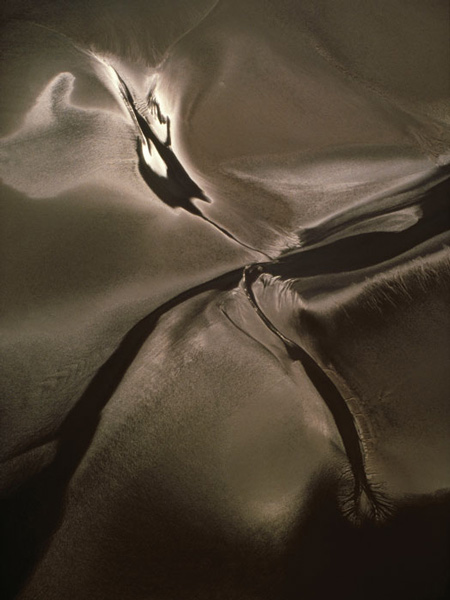 According to Richard, the Kimberley is one of the best areas to see the beautiful tidal variations, while the Great Sandy, Simpson and Strzelecki Deserts show beautiful undulating dunes, and early mornings and evenings at Uluru or Kata Tjuta are always worthwhile from the air.

“It takes a bit of flying,” Richard says, “but in lots of areas they do special air tours.” He recommends flights from Derby in the Kimberley and from Wyndham further to the northeast, as they’re pretty strong scenery-wise, showing off those special tidal variations, snaking rivers, the famous horizontal waterfalls and wonderfully pristine coastline. 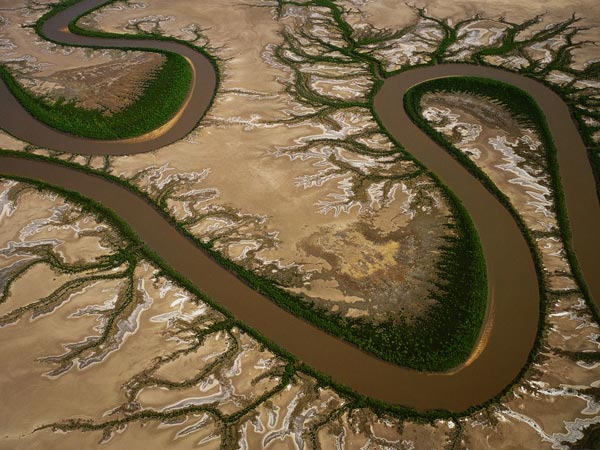 Ken Duncan’s love affair with the Kimberley is far from over but he says that a great – and accessible – place for adventure-seeking amateur photographers is Karijini National Park in WA’s Pilbara. With its red soil, white gums, spinifex and gorges like oases in the desert, it’s a truly Australian experience.

“It’s got all these beautiful little canyons,” he says of the great adventures and walks to be found. “There’s a caravan park, too, and it’s not too restricted.” Rugged Hancock Gorge – which resulted in Ken’s bestselling Emerald Waters shot – is one of his favourite spots. The best time to go is April/ May, as you have to not only climb down but also swim a fair bit to get into the canyon. “In the wet season you’d get washed out of it.” 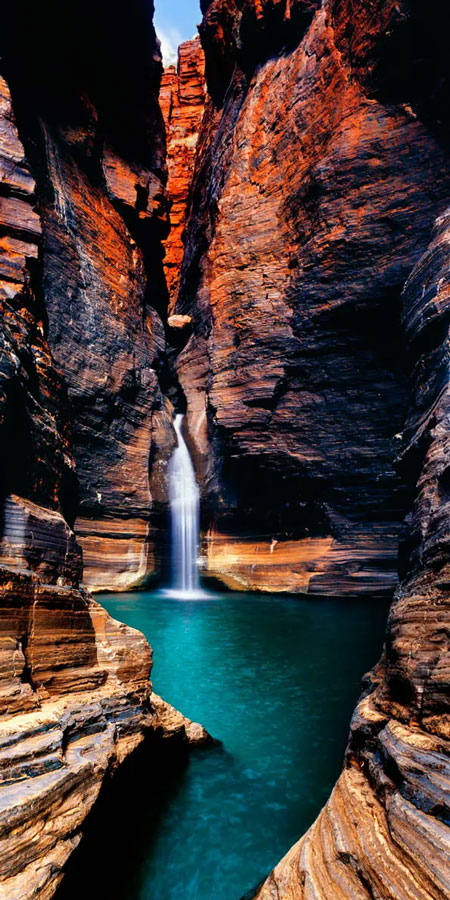 Counting southwest Queensland’s channel country as her favourite spot to shoot, Pip Blackwood loves cattle drives and camel races for that quintessential outback experience – lots of red dust guaranteed. She recommends the annual Boulia Camel Races. “It’s a fantastic thing to see, a real eye opener. It’s not exactly like horses,” she laughs. “It’s on a sand track and very disorderly.” The dying art of cattle driving is a truly old-fashioned way to see Australia, she says, but you’ll have to be quick, as many of the stock routes are being closed down. 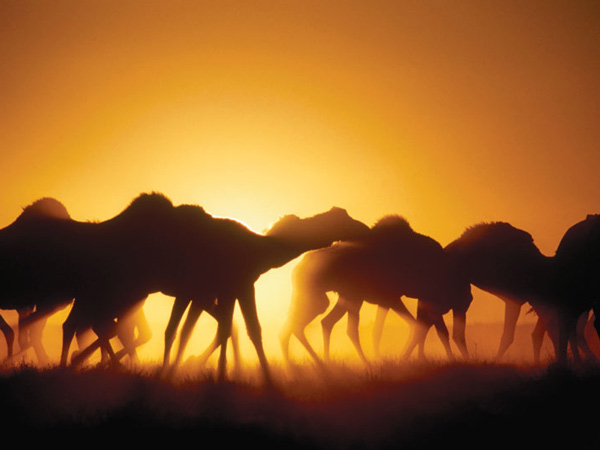 Lying there in your swag looking at the stars, cooking over a campfire and not showering for a week are outback pleasures that are hard to beat. And, luckily, there are quite a few organised cattle drives open to travellers, says Pip, notably in SA, where you might even get your own tent and occasional shower.

The real beauty of the Australian landscape isn’t an obvious one, says Grenville Turner. “You have to go there to really experience it. It’s subtle, and you have to learn to appreciate it.” Grenville has shot in the outback for around 40 years and says Alice Springs is a great base to explore Central Australia’s stunning scenery.

“I find that the variety of landscapes and opportunities within 100 kilometres is enormous,” he says. Grenville finds the Eastern and Western MacDonnell Ranges extremely giving, with its range of gorges and cattle stations. “It’s a very exciting place and there are some wonderful four wheel drives.” Mereenie Loop from Glen Helen on to Hermannsburg, Kings Canyon and even Uluru takes travellers through some amazing – and visually stunning – country. But get up early and plan wisely. “The light is gorgeous if you’ve got good timing. Gorges are actually better later in the day.” And whatever you do, don’t miss out on that picture-perfect sunset shot at the end of the day.