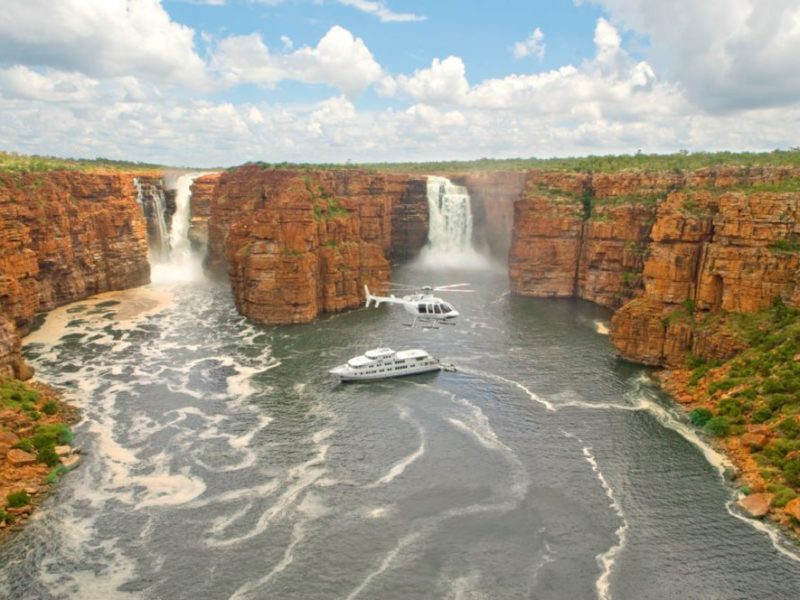 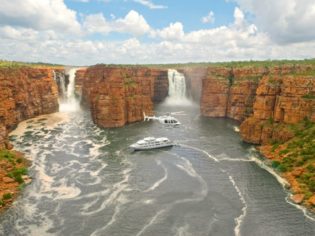 In the latest issue of Australian Traveller magazine, we followed Ken Duncan, the grand-daddy of landscape photography through the Kimberleys on a luxury bout tour. For your enjoyment now (and ours), here’s the fully expanded interview from that feature.

When Ken Duncan first decided to photograph Australia’s vast landscapes in 1982, he did it by the seat of his pants. The young businessman sold his car, gave up his job and went on a trip to the Kimberleys with his father, who was returning to missionary station Kunmunya. The duo went searching for a hidden cave with Aboriginal rock paintings described to them by their friend Howard Coates. They didn’t find the cave, but Ken returned with a knowledge of bush tucker, a love for the region and its people and – after five years of travelling – a whopping 80,000 photos.

He also forged a strong connection with the natives on this formative journey. The then 28-year-old photographer was quick to judge their drunken travelling companion, George Jamnery, but learned it’s better to walk with people a while and getting to know them rather than succumbing to preconceived ideas. As Ken says, “it will be worth the journey”.

The Aboriginal “walk-a-while” concept later would later become the name for Ken’s reconciliation project aiming to connect Aboriginal youths with their communities and equip them with valuable skills through the use of arts. He says the issue is one close to his heart: “It’s us, the people, who should bring about reconciliation.”

And Ken credits Jamnery, the Aboriginal elder, with teaching him how to become a better photographer by helping him to connect with his surroundings. “He said, ‘stop looking with your natural eyes and start feeling the land,’” Ken recounts.

Twenty-six years on, his eye for natural beauty and the special moment when a landscapes transforms into something almost surreal have taken the country town boy all the way to Tinseltown and back. His iconic limited edition photographic prints are popular with buyers across the world and he’s received numerous awards for his work. His pioneering use of wide panoramic format for landscape photography has earned him the title of Australia’s Panoramic Prince and his photographic portfolio includes a wide range of clients – from rock band Midnight Oil over the prestigious National Geographic magazine to charity WorldVision.

But the empty landscapes of Australia are undeniably where Ken’s heart is. His signature working and travelling style is still reminiscent of his very first photographic journey, living off the land with a rifle and only carrying the bare essentials, like camera equipment and dehydrated food. And the adventurous photographer’s quite literally suffered for his art – losing the top of his big toe to gangrene after taking a fall in the Olgas and suffering severe hypothermia on a trip to Western Tasmania.

Some of the places he’s visited are only accessible by foot (or helicopter), but Ken believes it’s essential to connect to these remote places and experience the whole scene. “In Australia we have something incredible,” he says. “These places are like god made them. It’s like entering into the Garden of Eden.”

At the start of his trips it normally takes him a day to get “into the zone”, which he says is a very spiritual experience and can get quite intense. The Central Coast-based photographer says most people fail to realise the beauty of a place because they don’t allow enough time and rush to get to the next place. Ken prefers to wait, stand back and get that special shot rather than the obvious one he says. ““It takes time when you go there. [You have to] allow it to wash over you. You don’t just capture the waterfall. But you add a different dimension… something that makes it unique.”

Sometimes, Ken will wait for the light to do something special for a whole day – while lots of tourists come and go, clicking away. But Ken prefers getting rid of preconceived ideas of what the shot could or should look like and connecting to the surroundings. “It gets to the point where you can sense the clouds etc.“

He says when people buy his prints, what they really buy is his gift of seeing the world. “A picture’s not just a picture; it’s your life, your eyes, your adventure.”

And the landscapes’ vast emptiness holds a strong fascination for Ken. “It does something to people. I think nature has the ability to unmask you. People are often scared of facing themselves and landscapes do that to people.”

He says most people fail to recognise a spot’s beauty and treat travelling like stamp collecting. “Usually, when that special shot happens, I’m the only one there.”

“Places have gifts for you. You just need to sit and relax and be where you are.”

He draws inspiration from the land and taps into the stories it holds, sometimes coming close to sensory overload, but usually returns refreshed from his trips.

And so it’s no surprise Ken’s love for Australia and especially the Kimberleys runs strong to this day. He calls travelling the remote area just after the wet season – when it transforms into a lush green wilderness with pumping waterfalls and dramatic clouds – “probably one of the most spectacular trips you can do in this country.

His latest trip to the Kimberleys onboard cruise ship The True North sounds truly decadent in comparison to his usual rough outback traveller style, though. “The boat has a helicopter on board and it can drop you into the most remote locations in the world.”

“Day after day, you are confronted by spectacular places. You could be blind and still take fantastic pictures.” But even Neil Perry-style dining, ice cold drinks, warm showers and the company of his family, won’t turn Ken into a luxury traveller, he says.

Last year, a quarter of a century after his first photographic journey, one of his greatest adventures finally came full circle, when the True North’s helicopter pilot helped him discover the cave with Ken and his father were searching for. Incredibly, he also found a message in a bottle from his late mate in the rock art’s shadows. “This personal message [sat there] waiting for me all these years. It moved me to tears.”

Ken’s worried the picture awaiting future travellers to Australia’s unspoiled remote areas might be a very different one to today’s. He’d like to see a long-term strategy implemented to preserve Australia’s pristine wilderness and doesn’t agree with National Parks’ strategy to “lock places away”.

Deforestation is another issue close to his heart. “It will take generations if you’re cutting [trees in] some places. You’re taking the soul of those places.”

Ken’s work has gone a long way to capturing the essence of Australia and his numerous books celebrate the continent’s beauty. His next publication, to be released in August, will be aptly titled Ken Duncan: Life, an Adventure. It’ll tell just some of Ken’s eventful life’s stories. He says a lot of them will focus on the people who made it so special. “I’ve met some fantastic people. This will be a kind of thank you to them.”