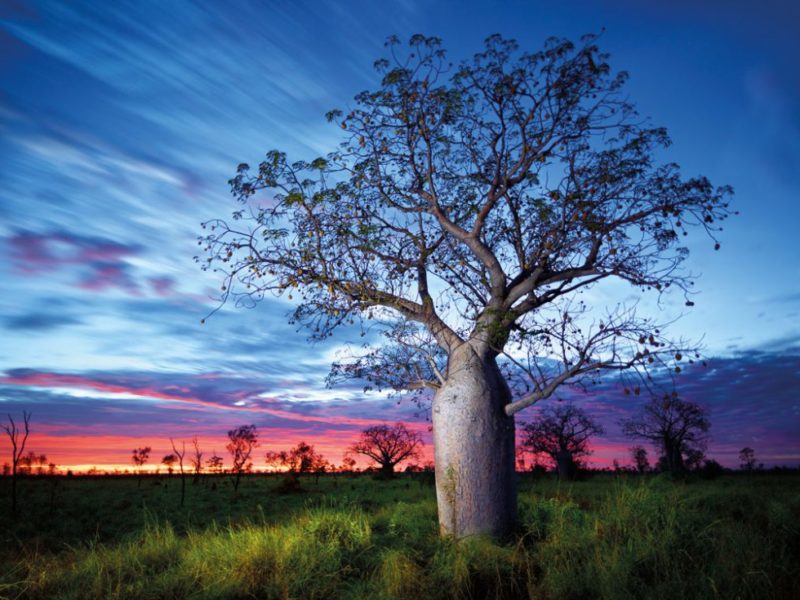 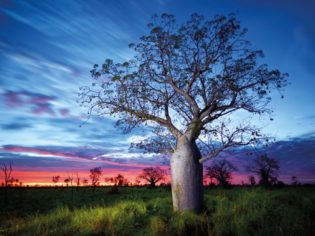 Australia’s favourite landscape photographer shares his tips and tricks on photographing remote areas – from getting friendly with the locals to capturing fast-flowing waterfalls and getting up at the crack of dawn, it’s all in a day’s work. Interviewed by Elisabeth Knowles.

This lovely scene depicts the Devils Marbles (Indigenous name: Karlu Karlu), south of Tennant Creek, but, says Ken, “Why would you give the devil the credit for something
so beautiful?”

This is the central panel of an image that would take four Australian Traveller pages laid side by side to show in full, but we’ve chosen this detail so you can see one of Ken’s favourite tricks to bringing an image to life – finding foreground interest.

“One of the most common mistakes amateur photographers make is that they’ve failed to create layers in the image,” says Ken. “In real life, the landscape may be incredible but when they take a photo it can look flat. Here, the foreground rocks give a sensation of depth.

But he also warns: “Don’t be afraid of blur. There’s movement evident in the leaves of the tree in this shot, which adds a bit of action.”

The other tip to be gleaned from this image is “be patient”. Ken stayed for three days at the nearby Wauchope Hotel to capture this photo.

“I’d have a pub meal, chat to the locals, wake up early [this image was taken at sunrise] then spend the day walking around.”

He adds that if you talk to people who live in the region, you’ll be let in on local secrets such as wonderful things to see nearby that other travellers wouldn’t notice or know about when following the well-worn tourist path.

One benefit of getting up early and shooting at sunrise is that you escape the crowds of tourists. “There is such a beautiful feeling here; it’s such a sacred place,” says Ken of the Marbles. “When you sit among the rocks you go into a state of quiet contemplation and it filters your mind.”

The one thing you may not realise from this image is the size of the rocks: “They’re huge!” he laughs. “People go and push against those balancing rocks and you think, ‘One day they’ll get a shock!’”

As with the previous image, shooting at sunrise means you often get the location to yourself. “No-one else is out of bed,” says Ken, so you can take your time enjoying the landscape, uninterrupted. The other benefit to this time of day is the light.

“The best light is with the sun behind you,” says Ken. “Everything in the foreground lights up and you get beautiful pastel colours. If you get up early enough, you won’t get your shadow in shot.”

Two hundred and fifty kilometres west of Alice Springs, the region around Haasts Bluff is very special to Ken because it’s where he has chosen to set up an art gallery and foundation to teach Indigenous kids from the Ikuntji community to take photographs, produce cinematography and play music. The Walk a While Foundation is named after the Indigenous philosophy that you shouldn’t presume to know anyone unless you’re willing to “walk a while” alongside them. For more information on the foundation, go to kenduncan.com/index.php/walk-a-while.

According to Ken, another common mistake people make when shooting landscapes is waiting until everyone leaves the frame before taking the photo. “That’s my helicopter pilot,” says Ken of the man sitting on the rocks in the image above.

“A person in the shot gives scale. Don’t worry about them being there – bring them in! And don’t worry about them having to show their faces. They don’t need to be recognisable unless you’re looking to get an ‘I’ve been everywhere, man’ shot. Also, wear bright colours! I don’t know why all hiking clothes tend to be made in tree-hugging brown and khakis. I wear red or purple, so if I get lost I can be found!”

Bright hues also stand out beautifully against the ochres and greens of the Outback.

Glycomis Falls is in a remote part of the Kimberley. Ken was here straight after the wet season ended, when the waterfalls were still fully flowing.

“This is my favourite style of shoot lately,” says Ken. “Finding locations where no-one else has set foot. Not many people would have ever been on the ground here [some Kimberley cruises, such as True North, come in by boat]. I’m not interested in taking photographs of the same old locations. I’m looking for secret treasures. I find many places by walking and driving, and sometimes by helicopter. I’ve spent over 1000 hours in a helicopter but I’m not interested in learning how to fly one. I want to be able to sit back and look.”

The image of Eagle Falls [opposite page] was shot in another remote Kimberley location accessed by helicopter. Ken recommends viewing your subject from all angles. “Don’t just go for the typical stand-and-deliver shot,” he says. “When you shoot a waterfall from the left or right you may catch a rainbow.

“Another consideration when shooting such a contrasty shot is that you need to read your histogram. I want to get everything in one exposure. I hate HDR [High Dynamic Range imaging]. Some people use it when there’s no need – they could have got it right in-camera. Expose for the highlights so your whites don’t blow out. Make the histogram go as far right as possible without slamming into the side.”

It’s also a wise idea to do a recce first, to see what time of day your subject is lit by sun.

“There is no such thing as ‘harsh’ light – it only becomes harsh if you’re shooting straight into it. This was taken around lunchtime.”

Waterfalls are terrific to photograph because the movement of water creates a sense of drama.

“A good exercise to make you understand water movement is to follow the water with your eyes,” says Ken. “Moving water tends to blur unless you follow the flow. Through the camera, the longer the exposure the blurrier the water. This was shot very fast so you don’t see much blur, but in the past I’ve shot with an exposure up to five minutes. The water becomes quite ethereal; seascapes become misty lakes. My daughter calls it ‘smudgy water’.”

TIP FIVE: GET TO KNOW THE LOCALS

“You need to build relationships with people before you have any right to take their photograph,” says Ken. “I had been on the beach with these children and their parents and we were just mucking around. They were pretty excited when they caught this turtle. It got away, thank God, but another wasn’t so lucky.”

This boab tree was taken at sunrise, on the main road between Derby and Broome, in the Kimberley. “People drive straight past all the time,” says Ken.

The technique used is called ‘light painting’: “The foreground is lit with a torch. I had my assistant go off to one side and shine the torch back and forth along the trunk and branches. He ‘painted’ it with torchlight while I took a long exposure. You could have lit the tree with car headlights but it’s hard to ‘paint’ with a car! Every traveller should carry a good torch anyway, they’re invaluable. I use the brand Wolf Eyes.”

These photos all feature in Ken’s latest book, Australia: Our Island Paradise (Panographs Publishing, $50). You can buy both the book and art prints online at kenduncan.com