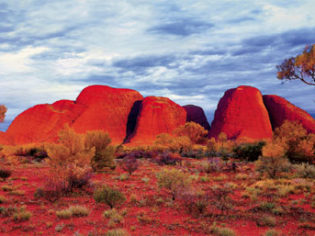 Ken Duncan’s Panorama: Forbidden Australia — As the lines of regulation are drawn and redrawn across the country, determining exactly what you can and cannot see of our most important national monuments, photographer Ken Duncan feels compelled to speak out.

I have never made a secret of the fact I’m a Christian – it’s the thing I am most proud of. However, I also respect each individual’s right to believe what they like. For me, the whole reason I do what I do is “to show the beauty of creation”. And when I started out trying to get my photographic career off the ground, it was easy to achieve this vision. I sold all my worldly possessions, jumped in my old Austin Lancer and took off around Australia, free and easy and able to go wherever I liked, whenever I liked. How times have changed.

Where is this headed, you might be wondering? I don’t want to get too heavy – but my point is that these days, vast tracts of our nation are practically off-limits to you and me. These areas are growing by the minute. And one of the biggest chunks of all looms large in Central Australia: Uluru, the Olgas, and the surrounding Uluru-Kata Tjuta National Park. And there is a religious significance of sorts here. But I’ll come to that shortly.

One of my images that you see here (Olgas Sunrise) was shot prior to access restrictions coming in, but these days this amazing view is no longer able to be witnessed.

In my last column I touched on the increasing amount of red tape and bureaucracy stifling photographers who want to show the world our nation’s immense beauty. At around the same time, the Director of National Parks announced the release of a Draft Plan of Management for the Uluru-Kata Tjuta National Park and called for public submissions. This plan is intended to guide park management over the next decade – and the big bouncing ball that has been paraded before the media in this whole spectacle is the fact they’re considering banning people from climbing the Rock. Yet there is so much more to the draft plan than that; this is just one of many freedoms that will be lost if this document is passed.

Before I go any further, I need to preface what I’m about to say by telling you that this is one of the hardest things I have ever written. The instant response to anyone with an opinion on Indigenous issues seems to be that you are branded a redneck. However, I’ve spent a lifetime working with Indigenous Australians, and I have great respect for them and for many of their beliefs. Many Aboriginal people have been very important to me personally on my journey. This has left me reticent about speaking out – but I feel that someone has to, or we will lose so many of the freedoms we once took for granted.

What is frustrating me so much is that the foundation of the whole Uluru-Kata Tjuta Draft Management Plan is a complex Indigenous religious concept called Tjukurpa. This is acknowledged on the Federal Government’s Department of Environment, Water, Heritage and the Arts website (www.environment.gov.au). This esoteric belief system, which the draft plan states is recognised as the “fundamental guide to management” of the park, is the foundation of life for the traditional landowners, the Anangu, yet it is a concept that changes constantly between people and generations. The department’s website also declares that “Tjukurpa is not written down, but is an oral culture”.

In effect, we have highly trained park rangers, who have spent years studying landcare management, yet they are at the mercy of this fluid and extremely complicated concept. Over the years I have seen areas that are sacred one minute become not sacred the next, and vice versa, to the point that nowadays 98 percent of Kata Tjuta is restricted and inaccessible. In fact, one of my images that you see here (Olgas Sunrise) was shot prior to access restrictions coming in, but these days this amazing view is no longer able to be witnessed. In a country that prides itself on the religious freedom afforded to its citizens, I find it incomprehensible that a World Heritage-listed Commonwealth national park can be run based on a religious concept. Personally, as a Christian I believe God created the whole area – but if I was to try and force everyone to believe that, I would never get away with it. And if I tried to collect royalties for ownership in the name of God I think people would start laughing at me.

One of the key areas of this 186-page Draft Management Plan that has me so annoyed is the issue of Indigenous Culture and Intellectual Property (ICIP). According to the draft plan, the Anangu regard all images of the landscape – photographs, films or artworks – as Indigenous cultural property. The plan also notes that the Anangu want appropriate control over how ICIP is used, including: recognising Anangu as the owners; Anangu sharing in the benefits (monetary and non-monetary) from the use of ICIP; and Anangu having the capacity to monitor use. This astounds me. No-one owns the copyright on natural formations. Even though the Indigenous people have been here 20,000 years, that’s a second on the clock compared to how long the Rock has existed.

I realise I’m pushing the same point over and over, but the fact is that I am so fed up with all the ridiculous rules and restrictions that exist, and Uluru is a prime example of a place where things are out of hand. There is not enough distinction about what is deemed commercial image usage, either. Under the proposed rules, if I go to Uluru-Kata Tjuta and take a wonderful photo, or paint a beautiful painting, or record some beautiful sounds to put into a musical piece, or write a poem about the place, then return home and someone offers me money for what I’ve done creatively, I become a criminal for accepting it – even if financial gain was not my original intent. Look, fair enough if a giant film crew were to come traipsing in to take over for weeks at a time – by all means, there need to be some guidelines there. But when it comes to you and me, making no more of an impact than the general visitor and in fact abiding by that old national parks motto, take only photographs and leave only footprints, I don’t understand the need for permits and permissions. We should be embracing exposure of our natural formations wherever possible, because it is going to help promote tourism worldwide and bring dollars to our country for all people. If we continue to make it hard for artistic people to tell their stories or share their feelings, it is seriously going to affect things in the long term.

One of the most important points highlighted in the Draft Plan of Management is the need for the conservation and protection of Uluru-Kata Tjuta, yet the very principles proposed under this so-called Tjukurpa management concept are quite the opposite, and they’re having a detrimental effect. For example, the excessive restrictions in place mean there are currently only two areas of Kata Tjuta that are publicly accessible. This is creating incredible environmental pressure on those two areas. There should be other areas opened up so the traffic can be dispersed and the two areas given time to rest. That is sound environmental management. Also, I wonder how many people realise that more than 1000 Desert Oaks were destroyed when they realigned the road from Uluru to Kata Tjuta so that visitors would be diverted from seeing one particular sacred area.

By the time you read this, the deadline for public submissions to the draft management plan will be well and truly over – and the final decision on the future of Uluru-Kata Tjuta will rest with Federal Environment Minister Peter Garrett and the Australian Parliament. Frankly, I am so over “Ulurules” and all the hoops I have to jump through to pull out my camera that I almost don’t want to go back there and put myself through the sanitised experience. The concerning thing is, it seems this style of management is slowly being rolled out on whatever parks the government can manage.

Unless we vow to watch this issue with eyes like hawks, it won’t be long before we’ve been locked out of our wonderful national parks altogether. The very areas which were originally annexed for the benefit of all Australians – both now and future generations.

1. When you’re shooting Uluru or The Olgas, some of the best shots you’ll get are after the sun has set or before the sun has risen. Just after sunset, you get a beautiful afterglow. Often, many people pack up their gear and think the sunset is all over, and they end up missing the greatest shot of all. For shots like this you need a tripod, because generally you’ll end up doing long exposures.

2. Try to find some good foreground interest, because often with iconic locations you can tend to focus too much on the icon without placing it in its environment. Avoid being overwhelmed and try to find something to lead you in. A good sunset on its own can be rather boring.

3. If you have a car with a roof rack, standing on it can really help you at the sunset viewing spots, and it helps you get more perspective because you’re shooting from a higher angle. If you’re doing long exposures, be very careful of movement of the car; make sure no-one is even leaning against it.

4. If you’re shooting landscape aerials, it’s a good idea to put your camera on manual focus if possible and focus on infinity, then put a piece of gaffer tape on the lens to hold it in place so every shot is pin sharp. If you’re shooting out of a helicopter, be sure to keep the horizon level. And if you have to shoot through Perspex or glass, make sure you put the lens as close to it as possible to minimise reflections.