One American’s Journey Through the Outback 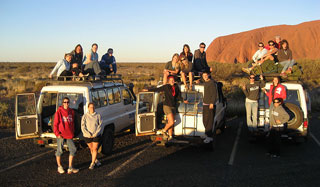 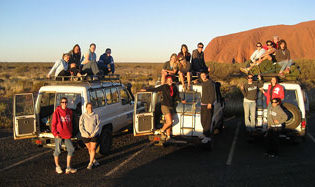 When she came to Australia for a five month exchange program, Liz Cameron had no idea that camping her way from Alice Springs to Uluru (and getting stranded there) would be one of the highlights of her entire trip.

The Outback, Australia’s famous Red Centre, calls to mind quite a few images. Vast open land. Deep red dirt. Kangaroos. But even with these preconceived notions of what the Outback would be like, I had no idea what to expect. As a girl who’d lived in Florida her entire life, the most I’d ever seen in the way of a desert before I came to Australia for five months as an international student was a bit of sand and some cacti in Arizona. So with a small duffel bag, pillow, eighteen other university students from the U.S. and four chaperones, I boarded a plane at Sydney Airport, completely unprepared for the experience that lay before me

As we prepared to touch down in Alice Springs, the first thing I noticed about the Outback was its vastness. Even from thousands of feet up in the air, that red earth seemed to stretch on forever. After making our way through baggage claim to pick up our swags, sleeping bags, and various other camping supplies, we packed ourselves into four vans and were on our way.

After about a two-hour drive, we arrived at our first destination, a campsite in Ormiston Gorge. With only two or three hours of daylight left, we hastened to take a brief hike through the gorge. After making our way through some breathtaking areas, and of course pausing for numerous photo ops with rock wallabies, we headed back to our home for the night. The only part of the night that didn’t go smoothly was when one of the other students and I had to trek down a rocky path to fill a tub with hot water from the showers so that we could wash the dishes we’d used during dinner. Making our way back down that path in the pitch-dark night with the heavy tub semi-balanced between us was a quick initiation into the world of “roughing it”. Other than that, the night was a very peaceful one. Except for when a dingo invaded our camp in the middle of the night, but I suppose that’s just the risk you take when camping in the middle of Australia. The next morning, we all woke up early, packed up camp, and settled in for a bumpy ride down long dirt roads. Our destination on day two? Kings Canyon.

When we arrived, we went directly to the canyon. After having lunch in the luxuriously paved car park (we were all feeling a bit battered after the less-than-smooth drive) we met our guides for the next two days, Micah and Patrick. As two highly respected members of the local Aboriginal community, Micah and Patrick knew just about everything there was to know about Kings Canyon. After a quick history lesson about the gorge, we embarked on a three-hour-long hike that was gruelling to say the least. They don’t call the first part of the hike, where you have to climb a staggering number of steep rock steps, “Heart Attack Hill” for nothing, take my word for it. With the hardest part of the hike behind us and our legs more or less intact, we embarked on what would end up being one of my favourite memories from the trip. Micah and Patrick told us some amazing stories about the gorge and showed us native plants that could be used for medicinal purposes. The views were breathtaking, the scenery some of the most beautiful I’d ever seen. By the time we got back to the car park, I was exhausted, thrilled, and had a memory card full of photos. Little did I know, the night would be just as exciting as the day had been.

After taking much-needed showers and eating inordinately large servings of dinner, we sat around the campfire and then received an unexpected visit from Micah and Patrick, who had brought us a special treat. They had gone hunting and found a joey in the pouch of a kangaroo they’d killed, put in Micah’s backpack, and brought it to our campsite where it would be spending the night with twenty-three more-than-willing babysitters. After agreeing that the joey should be called Bianca (after the character from The Rescuers Down Under, of course) we took turns holding her in her backpack-turned-pouch before splitting into two groups: those that wanted to go hunting with Micah and Patrick and those that wanted to stay at the campsite. I decided to stay at the campsite and was quickly designated as Bianca’s official caretaker for the night. So after the newly experienced hunters returned, I settled into my sleeping bag and swag (we stopped setting up tents after the first night because we couldn’t resist sleeping under that beautiful night sky) with Bianca in tow. Shortly after dawn, I was awoken by a series of sharp kicks in the chest, courtesy of the joey in my sleeping bag. It was time to begin day three of our Outback adventure.

The twenty-three of us (twenty-four with Bianca) piled into the vans and drove the short distance to Ulpanyali, the community where Micah and Patrick live. While there, we met other Aboriginals who live at Ulpanyali and showed us how to throw spears, cook a kangaroo, and told us some more stories about their culture and the area. After spending several hours at Ulpanyali, we gave Bianca back to Micah, who took her to a nearby kangaroo reserve, and said goodbye to our new friends. Now, finally, it was time to go to Uluru.

Even though we’d spent the entire afternoon crammed into the vans, we were all smiles when we finally caught sight of Uluru in the distance. We went straight into the park and soaked up as much of the massive rock as we could. After watching the sun set there, we went to set up camp for the last time. We would be staying at a campsite near the park for the next two nights, since we had agreed that Uluru was where we wanted to spend the majority of our trip.

Shortly after dawn, I was awoken by a series of sharp kicks in the chest, courtesy of the joey in my sleeping bag. It was time to begin day three of our Outback adventure.

The next morning, we rose before the sun and went back to Uluru. Bob Randall, who most people just call “Uncle Bob”, invited us to watch the sunrise from a beautiful lookout point in the community where he lives. Uncle Bob is a very inspiring Aboriginal man who, as a member of the Stolen Generation himself, works to help those who were also taken from their families. Uncle Bob also invited us to take part in a traditional sunrise ceremony and then go back to his house for breakfast. Needless to say, it was an incredible experience. We spent the rest of the day exploring Uluru and Kata Tjuta, trying not to think about the fact that we were supposed to fly back to Sydney the next day. Little did we know, Qantas had other plans for us.

We showed up at the Uluru airport the next morning only to be told that Qantas had us listed as flying out of Alice Springs rather than Uluru and informed us that we would have to drive back to Alice Springs and fly out two days later. Under any other circumstances, we would have been euphoric at the chance to stay in the Outback for an extra two days, but we were all out of clean clothes and weren’t sure how much more bouncing in the back of the vans we could handle. So with dirty socks and exasperated sighs, we packed the vans yet again and began the long drive back to Alice Springs.

Over the next two days, we amused ourselves by exploring the town, going to the incredible market held there, visiting a wildlife park and hanging out at the campsite (which had a laundry facility, God bless it). When we showed up at the airport this time, our group reservation was accurate and we filed onto the plane that would take us back home to Sydney. We were exhausted from the whirlwind of the past week, our clothes were permanently stained red, but we were ecstatic about the experience we had just had. I’ve had the opportunity to see many incredible things during my time in Australia, but the Outback is definitely on the top of the list, lost flight tickets and all.