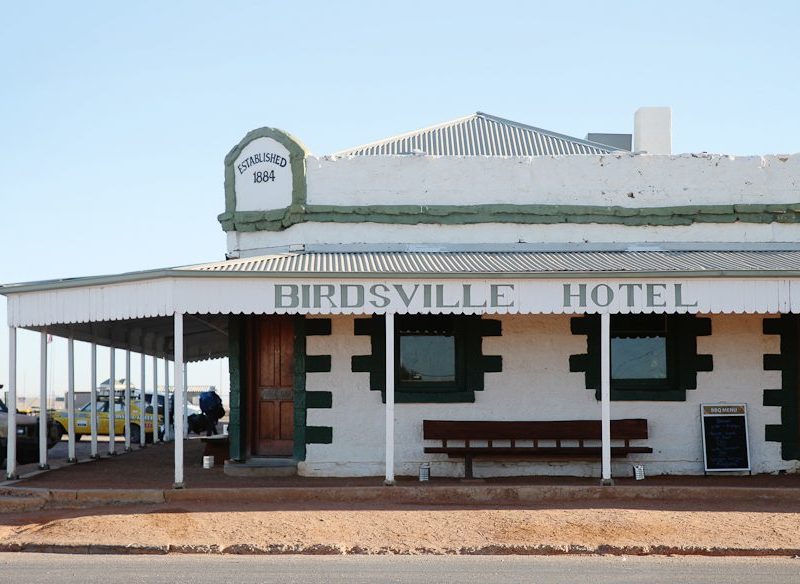 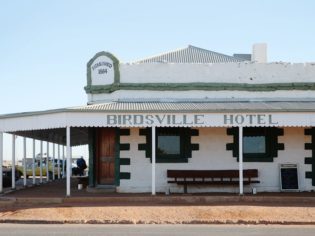 Pull up a stool at any of these fine establishments to sip an ice-cold beer and soak in some serious outback idiosyncrasies.

In Barrow Creek, NT, we stopped at the pub with some trepidation after the bad press the area had encountered. We filled up with petrol after going in to get the key for the bowser. We then decided it was time for a drink after being on the road for so long.

We marvelled at the atmosphere of the pub: money stuck to the ceiling from travellers (this goes to the RFDS); old farm pieces suitable for a museum; customers who rush in and yell that they’re “off to the hospital and will pay for the petrol later”; and a farmhand who worked in Les Girls.

We struck up a conversation with this man and heard stories of Carlotta coming to the outback and the life he leads now. He was polite, full of stories and genuine . . . an Aussie with courage to try anything. What a find this pub was. It has reinforced our belief in Australia being the best place ever. At least in the face of adversity, this pub has retained its unique flavour. – Bonnie Vicary

In a little ghost town in WA, this is basically the only thing standing. The pub is filled to the brim with historical pieces that show what was once a gold mining boomtown. Plus the owners are true characters that really love the land and the preservation of its history. 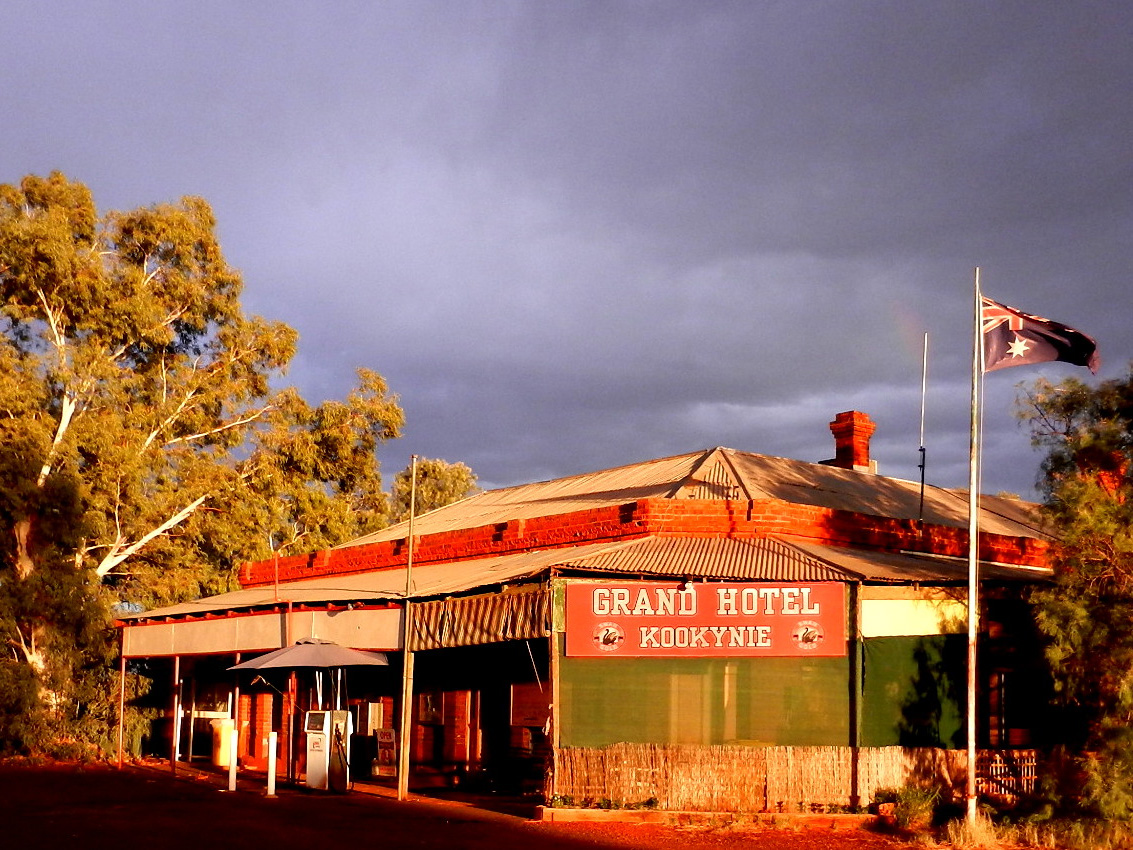 The managers and staff could not be more helpful. Clean, cool rooms, tours for free to all the sites of interest – Big Red, the biggest dune in the desert, the rare Waddi trees, which have timber so hard they blunt axes, The Diamantina river to see why the town is so called (a myriad of birdlife) and finally the cemetery, where it was so sad to see people, the pioneers, that gave their all to establish this fine community.

We went to Broome in March 2006, complete with 40-degree heat! We expected to sit by our resort pool sipping cocktails all day, fitting in massages now and then. Which we did, for the most part.

What we didn’t expect was to stumble across Matso’s pub, complete with refreshing, home-brewed ginger-flavoured beer, delicious beer-battered fish and chips, and a place overflowing with character.

The working fans were an added bonus. It gets our vote for best outback pub ever! – Hooma Mishra 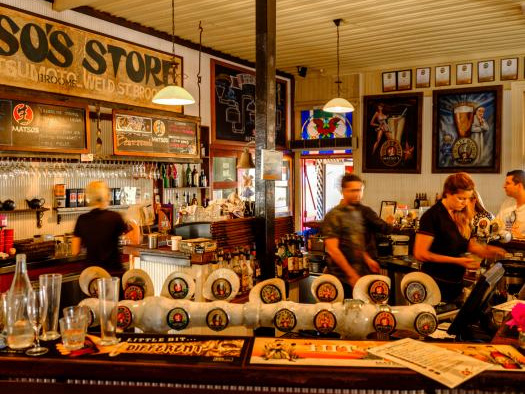 The bustling inside of Matso’s pub and brewery

A few years ago I arrived at the Lion’s Den Hotel near Cooktown after a long and dusty drive. What a classic Aussie pub! An old timber and tin building, the interior walls are signed by the hundreds of thousands of visitors who have stopped by over the years. – Pauline Snape-Jenkinson

The food here is phenomenal and the locals are the friendliest people I’ve ever met. I’m a Victorian and there’s no way we get service like that down here. – Jaime-lee Page

The best outback pub I’ve been to was at Hungerford in outback Qld.

Out the front is a zoo made from all kinds of metal and junk found on outback properties. When a customer asks about the zoo, the publican charges them money for an explanation, with all monies collected going to the RFDS. – Rose Dickson

You’ll find this remote outpost some 871 kilometres north of Adelaide along the Oodnadatta Track, which stretches for 617 unsealed kilometres from Marree and Oodnadatta in the South Australian outback. Hole yourself up in the character-filled bar and dining room fashioned from old Ghan railway sleepers and spend the night in accommodation that ranges from camping to a self-contained two-bedroom cottage called the Camel House. Don’t miss the chance to take an early morning scenic flight over Kati Thanda-Lake Eyre; William Creek is the closest town to this famous otherworldly salt lake.

One for the film biffs, Silverton Hotel has reprised the role of  ‘quintessential outback pub’ in many a movie over the years including Wake in Fright, Mad Max 2, The Adventures of Priscilla, Queen of the Desert and Mission: Impossible 2. Serving great pub grub 25 minutes drive from Broken Hill, head here to soak in some true-blue outback spirit. 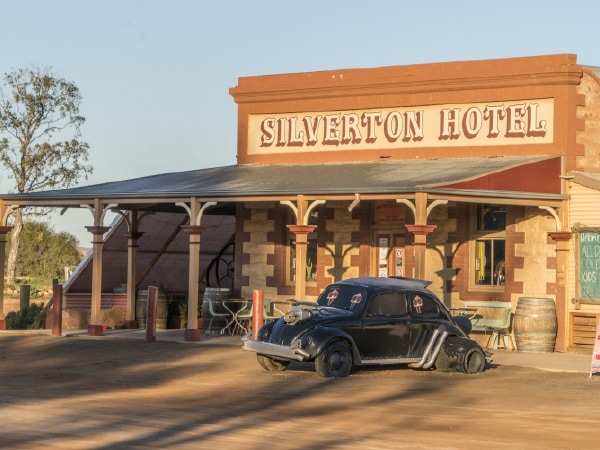 Silverton Hotel is the quintessential outback pub movies are made of

With a storied history and walls Festooned with bras and other personal effects left behind by travellers for posterity, this is one quirky watering hole. You’ll find it 600 kilometres south of Darwin off the Stuart Highway, offering comfy digs and meals made from scratch to mop up with hot damper. 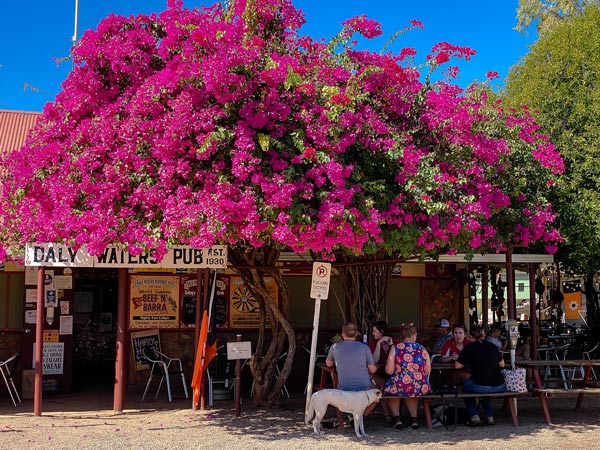 A true blue outback pub – the Daly Waters Pub is a colourful pub, clad in corrugated iron, draped with bougainvilleas and crammed with decades of memorabilia. (Image: Tourism NT/Kate Flowers)

Established in 1889, The Blue Heeler Hotel in Kynuna – population 10 – is steeped in Australian folklore. Not only was it here that Banjo Paterson first performed Waltzing Matilda, but the pub also features a brick fireplace that was built by RM Williams. Stop for a meal and cold beer on your way from Winton to McKinlay and sign your name on the walls by making a donation to the Royal Flying Doctor Service. 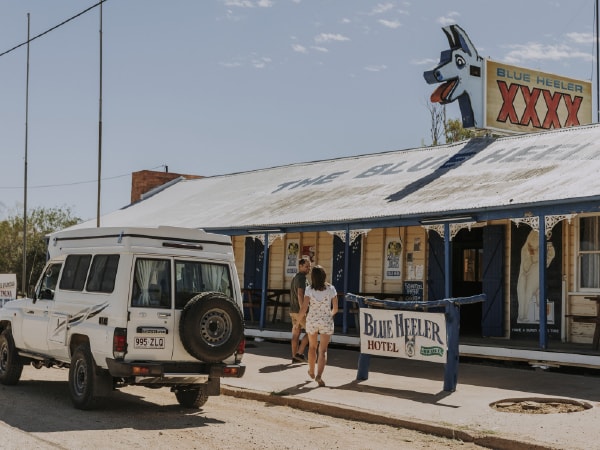