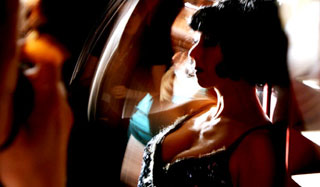 AT Editor Greg Barton road tests the latest entry level Digital SLR from Sony, the Alpha A380.
For the launch of Sony’s new range of entry level (Alpha) Digital SLR cameras, a group of journos was invited to the Sydney Opera House to play with the new cameras, photograph chef Guillaume Brahimi and his food at his famous Bennelong restaurant, and even head backstage to photograph cabaret starlet Meow-Meow as she prepared for that night’s show.

If you’re even a tiny bit of a photography “purist”, Sony’s new lightweight range will probably infuriate you.

As launches go, this one was up there – a nice idea very well executed. We had three pro photographers on hand to guide us through the quick ins and outs of exterior shooting, food and portrait shooting, and low-light shooting.

Unsurprisingly, the message Sony is trying to get across with its new Alpha range appears to be that ANYONE can be a photographer, and take a great shot. The presentation of the Alpha range’s technical specs focused on how other camera brands appear to make things needlessly complicated by using all kinds of sophisticated numbering and lettering systems – as opposed to Sony, who believe that calling a macro lens a macros lens, and a zoom lens a zoom lens, will attract beginners who are afraid of (or confused by) advanced technology.

The in-camera help menus are an extension of those found in point-and-shoot models, which again strive to massively simplify the processes involved in taking a good shot. There remains, of course, that element of flexibility inherent in all DSLRs, but the marketing strategy appears to be to encourage beginners to ignore that flexibility and focus on the auto-modes, which do everything for you except press the button.

If you’re even a tiny bit of a photography “purist”, Sony’s new lightweight range will probably infuriate you – in the same way that annoying Microsoft Word Paperclip did. But for everyone else (ie, those people daunted by the intricacies of high-range DSLRs, ie, most people), Sony’s Alpha range will open doors and windows of photographic experience that were previously well beyond your reach.

HAVE YOUR SAY: What do you think? Would you stack your Digital SLR photography against Sony’s new Alpha range? If you’ve got an opinion, sign in below to post your comment.