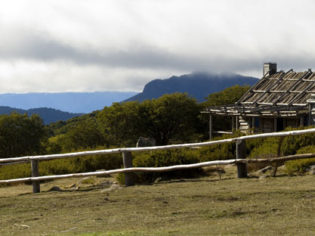 The fourth of Australian Traveller’s epic bushwalks, the Australian Alps Walking Track is also the highest.

Foremost is the walk from Mt Howitt to the Viking (four days), revealing some of the most rugged and spectacular areas in the High Country. The type of terrain is betrayed by some of the feature names: Mt Buggery, Mt Despair, Horrible Gap and the Terrible Hollow.

The mountain lover’s long-distance trail, the Australian Alps Walking Track (AAWT) rolls up, over and through the High Country between Walhalla, in Victoria’s Gippsland region, and Canberra’s edge.

Though it’s the closest of the trails to Sydney and Melbourne, it’s also conversely the most isolated and demanding, requiring detailed preparation and up to six weeks in changeable mountain conditions.

Throughout its 680km length, the AAWT never once passes through a town – the nearest thing it sees to a settlement is the Mt Hotham resort (it also passes within a few klicks of Thredbo).

For this reason it’s a logistical exercise as much as a physical one, requiring a number of food drops (usually hidden in the bush) to be organised ahead of your departure.

First mooted as a walking trail in the late 1960s, the original plan was for a Victorian track only, beginning in Walhalla and ending at Tom Groggin on the NSW border.

By 1976 this trail was complete, and it wasn’t until the 1990s that the extension through NSW and into the ACT was added.

Though it’s unquestionably spectacular, the AAWT is also an imperfect trail, running close to some of the country’s outstanding peaks, including Mts Feathertop, Bogong, Kosciuszko, Townsend and Tate, but not over them.

Fortunately, it’s a simple task to remedy this. A day can be spent walking along Razorback Ridge from Hotham to Feathertop, while Cleve Cole Hut, on the AAWT, is little more than an hour’s walk from Bogong.

At Rawson Pass, beneath Kosciuszko, the AAWT makes an unusual dogleg, turning away from the peaks and following the sealed Charlotte Pass road back to Smiggin Holes.

Far better is to continue along the Main Range from Rawson Pass, climbing over Australia’s highest peaks and rejoining the AAWT at Whites River Hut.

Trail highlights are many, though two or three stages stand out.

Foremost is the walk from Mt Howitt to the Viking (four days), revealing some of the most rugged and spectacular areas in the High Country. The type of terrain is betrayed by some of the feature names: Mt Buggery, Mt Despair, Horrible Gap and the Terrible Hollow.

Begin near Macalister Springs, off Howitt Road, joining the AAWT just below Mt Howitt and inching across the narrow Crosscut Saw ridge to Mt Speculation.

After climbing to the summit of Mt Despair the terrain becomes even more difficult, with the track unmarked and difficult to follow.

Atop the Viking, the AAWT turns east towards Barry Saddle, but you can also complete a circuit back to Mt Howitt by descending to the Wonnangatta River and back up the Wonnangatta Spur.

A second section of note is the 76km from Hotham across the Bogong High Plain and Mt Wills to the Omeo Hwy, following snow poles much of the way.

It represents about five days in the company of Victoria’s mountain royalty: great views of Feathertop, a climb to Mt Nelse, a detour to Bogong and, finally, views back to the high plain from Mt Wills.

This section also provides a great showcase of mountain cattlemen huts, like Wallace’s Hut on the Bogong High Plain (top).

For a break from mountains, consider the 50km section from the old gold-mining settlement of Kiandra through the Cooleman area of northern Kosciuszko NP.

You’ll have the opportunity to see the Murrumbidgee River in its mountain-stream infancy before climbing over Gurrangorambla Range to one of the High Country’s most unusual features: the porous karst of the Cooleman Plain.

This tussocky plain is hole-punched with caves, most notably at Blue Waterholes, where a series of springs pours to the surface.

Take a detour (and a torch) west along Cave Creek and you’ll find two of the more impressive caves, while the creek itself is most dramatic just downstream from Blue Waterholes, through the limestone Clarke Gorge to a series of waterfalls beyond.