The cry from the Outback: What Recession?! 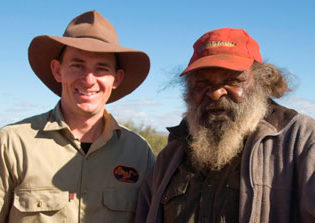 Australian Traveller contributor Gail Liston is based in Alice Springs, and has been noticing that, far from a Global Financial Crisis going on out there, business is actually booming. But why?

In the office of Wayoutback Desert Safaris, the phones are buzzing. When asked why it’s so hectic, Lia Black throws her head back and laughs. “Busy? Someone forgot to tell us here in Alice Springs that there’s a recession going on!”

This appears to be the status quo in the Red Centre, where tourism is in no way feeling the global economic crisis squeeze, visitor numbers are up and, best of all, Aussies are flocking to the Outback to rediscover their heritage.

“We have haven’t felt the pinch of the recession at all,” says Symon Conway, manager of Kings Creek Station, an Outback resort and campground facility near Kings Canyon about 300km from Alice Springs.

The message is the same no matter who you talk to: tourism is booming in Central Australia, thanks to the Aussies who are making this the year to see their country.

“Compared to last year, we’re probably twice as busy. We’ve had to put on more staff to cope with the pressure. We’ve got more travellers coming through, but the best thing is generally we’re seeing more Australians and less of the bus coaches with Europeans on board.”

Taking the hint from the Tourism Australia and Tourism NT marketing campaigns aimed at getting us metrophiles to travel at home, more of us are jumping on planes, buses and trains – as well as getting behind the wheel to experience some of the wonders of central Australia. In 2009 you’re more likely to hear “G’day” rather than “bonjour” or “guten morgen” at Uluru, Trephina Gorge, Rainbow Valley or in the Todd Mall in Alice Springs.

“The marketing campaigns have been trying to get the Aussies to travel in Australia, so I think we’re seeing the results of that,” says Warwick (Rocky) Rock, regional manager for Australian Pacific Touring (APT) in central Australia.

“The domestic market has definitely gone up because of these campaigns and there are terrific deals out there for Australian travellers, with operators such as ourselves running two-for-one deals. Why wouldn’t you travel in Australia this year when there are offers like this around?”

And Aussies are not likely to let a good deal go wanting, so it’s not at all surprising to find tour buses bursting at the seams with home-grown tourists seeking something a little different from their holiday experience.

“Used to be very rare that we got Australians on board,” says Ben (Beno) Rogers, a driver guide with Adventure Tours, as he rounds up his 20-plus 20-something passengers who have been enjoying the winter sun in front of the café at Kings Creek Station. “But we’re seeing more and more this year. Everyone on this tour is Australian . . . very unusual.”

Back at Wayoutback, company owner Don Wait is enthusiastic about the state of tourism in the centre. “Wayoutback is having its best year on record,” he says. “It’s full on. It’s fantastic. It appears at this stage the economic crisis hasn’t hit us. I mean, it certainly hasn’t hit us here in Central Australia.

“I was at a tourism conference recently and someone said to me: ‘Everyone’s got beaches and Australia’s beaches are good, but you can good beaches all around the world. What you can’t get is what you’ve got here in the Territory.’

“It’s unique,” he says, “and that awareness is out there about what we have here in the Territory and people here in Australia are starting to realise it. Finally.”

Kathy and Brett Graham would agree with this. This pair of seasoned tourism industry professionals decided in June to open their own tourist operation, something some may think a little foolhardy in the current economic climate. They started by purchasing a block of holiday units called Hillsview Apartments in Alice Springs and in August launched SEIT Outback Australia, a touring company specialising in small groups and charters throughout the Red Centre.

“Since we took over the apartments we’ve had hardly any vacancies,” says Kathy Graham. “We don’t see that there’s an economic downturn here at all. In fact, tourist numbers are up and we have strong bookings from the domestic market, and for a new business that’s really good news.”

Husband Brett says more and more Australians are travelling in their own backyard. He’s not at all concerned about dipping his business toe into the often-fickle world of tourism. “I’ve said right from the start that you have to decide whether you’re going to take the recession on board or press on with life. We decided to ignore the recession, seize the opportunity and move forward – and it’s working ‘cause our bookings are strong.”

According to Maree Tetlow, chief executive of Tourism NT, more Australians are visiting the Red Centre this year than in the previous two years.

“The Red Centre is effectively the heart of Australia and this unique travelling experience offers visitors the opportunity to embark on a journey of self-discovery and wellbeing – to refresh the mind, rejuvenate the spirit and get centred,” she says.

“This destination is so different. For many, the experience of coming here is akin to an international holiday. Now with more people opting to stay closer to home during their holidays, many more Australians are moving their desire to visit the Red Centre from their holiday wish-list to a holiday booking.”

The message is the same no matter who you talk to: tourism is booming in Central Australia, thanks to the Aussies who are making this the year to see their country.