The evolutionary tale of Megan Gale 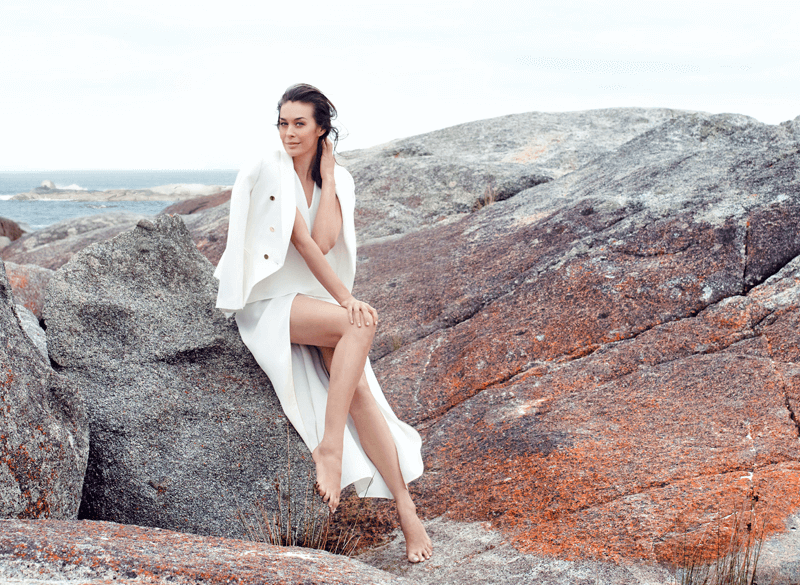 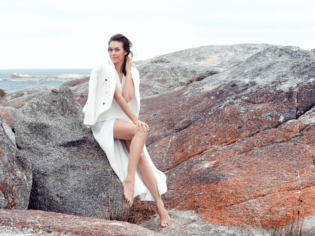 In the fickle world of fashion, Megan Gale has carved herself a niche with her glamourous beauty and ready smile. But now she is navigating the next step in her career, evolving into an actor, businesswoman and model mother.

It’s 5:30am on an overcast Tasmanian morning and the early start is weighing heavy on many members of the AT team.

Arriving at the house where our cover star, Megan Gale, is in residence for this issue’s shoot at the Bay of Fires, most of us make a beeline for the coffee machine.

Not Gale. She is already being hovered over by a make-up artist, getting ready for yet another photoshoot, the umpteenth in her career.

She is friendly and her signature warm smile lights up her green eyes readily, in spite of the fact that she is feeling slightly under the weather herself and has left her adored two-year-old son, River, at home with his dad (AFL player Shaun Hampson) in Melbourne with a fever (she discreetly checks in on how he is throughout the day).

But then Gale has built a reputation for being a consummate professional during her time in the modelling industry, which effectively started with a bang back in 1999 when the then 24-year-old Western Australian native became something of an overnight sensation in Italy.

At the time she was cast in the ad for the Italian telecommunications company Omnitel (now Vodafone Italy), Gale thought it was just another one-off job, but something about her glamorous dark beauty (Gale’s mother is of Maori descent) appealed to the Italians.
“It was very surreal and really overwhelming,” Gale says now of the experience. “When I first shot that TV commercial I just thought it was another modelling gig. I thought I would never even see the commercial because it was being shown in Italy and I lived in Australia.

“But then I was told that I was being flown over there because everyone loved the commercial and wanted to meet me – I didn’t even really get it until I arrived and there was this huge welcoming reception from a whole country!

“It was kind of like I was living two lives for a while. I had this notoriety in a country I’d never been to – I didn’t understand their culture or what they were saying – yet back home I was unknown and still trying to get work.

“It was such a strange time; it was a lot to get my head around. A lot.”

Gale retained the contract with Omnitel until 2006 and even ended up relocating to Italy for a time.

While the story reads like something of a fairytale, she says it was also a steep learning curve.

“I was a completely independent person back in Australia, but when I moved there I had to have people translate for me; I had to be driven everywhere; I had a bodyguard.

“It really taught me to adapt, to live outside my comfort zone, to stand up for myself because a lot of people, knowing that I was a bit naïve and a bit vulnerable and a bit green, were trying to take advantage of me, be it business deals or contracts or photoshoots.

“It was a really challenging time, but I learnt pretty fast about trying to form my independence in a country where I had to think on my feet. I grew up very quickly during my time there.”

It was a far cry from her early days in Western Australia, where according to Gale she had a typical Australian childhood.

“I have some pretty fond memories of my childhood. I grew up with two older brothers and by nature of being around them I was a little bit of a tomboy,” she explains.

“But it was kind of split: I could be climbing trees and catching goannas in bushland, but in the afternoon I could be playing with a Barbie doll.

“I still feel like I’m very much that girl, just as comfortable hanging out and screaming at the footy as I am having a gorgeous gown and make-up on.”

Having originally moved to Sydney from Perth at the age of 18 and spending five years as a working model to middling success, her fame in Italy finally made Gale hot property here in her own country.

Using the savvy she picked up along the way, she went about translating her unexpected fame into a bona fide career, becoming a brand ambassador for both David Jones and L’Oréal Australia, designing her own swimwear label, Isola, for Seafolly, working on television as the presenter of the Australian version of Project Runway and as a guest judge on Australia’s Next Top Model, and designing homewares for Target.

And then, of course, there’s the Academy Award-winning Mad Max: Fury Road, the fourth instalment in the hugely successful Mad Max franchise, in which she played a post-apocalyptic desert warrior opposite Charlize Theron and Tom Hardy.

There was talk of Gale filling the role of Wonder Woman on screen in an aborted George Miller production, but while she loved the experience of working on film she says there is no move to Hollywood in her immediate future.

Rather, her focus now seems to be on being a model mother rather than an actress–model.

“River’s influenced me so much for the better, I think,” she says. “He helps me put things into perspective; things that I used to worry about and think were a big deal aren’t as much anymore.

“You just think about your son and his health and his happiness, and, also as a parent, your own health.

“Those kind of things are important; without that it’s all just a bit irrelevant. His health and wellbeing are just my absolute priority.

“And I always imagined it would be like that before becoming a parent, but until you do, you don’t realise how much they become your world and how much attention and time you give them.

“I think making him a priority and how much that occupies my mind has pleasantly surprised me.”