The Ghan versus Indian Pacific – which train to choo-choose? 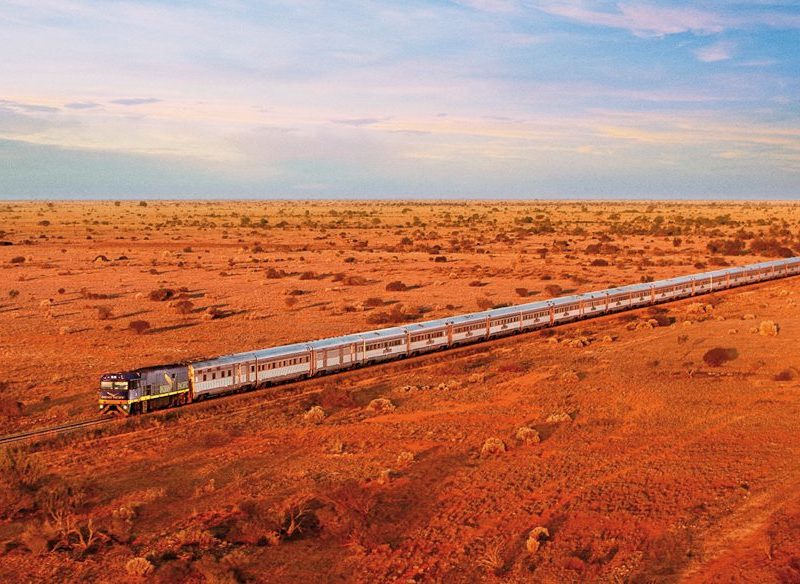 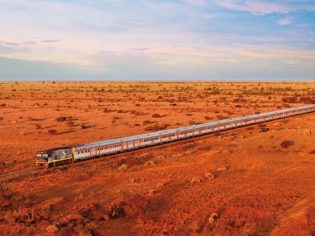 BY Megan Arkinstall and Steve Madgwick

The Ghan or Indian Pacific? It’s a tough choice between Australia’s two most epic rail holidays. No fear, Megan Arkinstall (The Ghan) and Steve Madgwick (Indian Pacific) will help you decide which train journey is best for you.

Which route is best for you?

The 65-hour Indian Pacific trip traverses the continent, from Sydney to Perth (via Adelaide), covering cross sections of many and varied regions including the famed Nullarbor Plain crossing. The 4352-kilometre journey takes three nights and four days.

What’s the physical difference between the two trains?

Besides the signage and livery, very little actually. Adelaide-based Great Southern Rail operates both The Ghan and Indian Pacific so the carriage and restaurant car interiors are identical (a carriage on The Ghan route may be on the Indian Pacific the following week).

The locomotives are different colours – Red for The Ghan, blue and yellow for the Indian Pacific – and external carriage signage is interchangeable.

The question of price – how much?

There are two classes on the trains: Gold and Platinum services. Indian Pacific fares (Sydney-Perth)  start at $2269 (Gold) and $3919 (Platinum). Adelaide to Darwin on The Ghan starts at $1789 (Gold) and $3319 (Platinum) – see Great Southern Rail for fares in the opposite direction.

These are one-way fares so you will need to allow for a return airfare and at least a night’s accommodation at the other end too.

Book six months in advance to get a 20 per cent discount off Gold class.

Where do they stop?

The Indian Pacific stops at Broken Hill in outback NSW (where you have the chance to travel out to the sandstone sculptures of the Living Desert Reserve) and includes either an evening’s side trip to the Barossa Valley (or a walking tour of Adelaide). There are two stops along the Nullarbor; a whistle-stop rest at the tiny town of Cook and a trackside feast at Rawlinna, an expansive and remote sheep station.

A stop-off at the quirky South Australian town of Coober Pedy (south-bound only) has recently been added to The Ghan’s classic Red Centre stop at Alice Springs (where you can go for a camel ride and experience some local indigenous culture) and Katherine, where there is an option for a boat cruise through Katherine Gorge.

The view: Which scenery will I prefer?

The Indian Pacific warms up through the windy, dramatic bush-scape of Sydney’s Blue Mountains and then flashes past tiny towns into the NSW outback. The view turns a little more fecund as the train heads past Adelaide (and near to the Barossa Valley) before the Nullarbor pancake begins. Greenery returns as you coast into Western Australia’s verdant Avon Valley, followed by the ’burbs of Perth.

On The Ghan (from Adelaide) rolling green hills flatten into wine country and farmland, then dry rugged terrain and the jagged peaks on the Flinders Ranges. The rural landscape out this way is marked by abandonment: farming apparatus, crumbling buildings.

Keep an eye out for the small Iron Man monument between Tarcoola and Alice Springs – which marks the one millionth concrete sleeper laid in the track – and Finke River, which depending on season can be just a dry sandy river bed lined by red river gums. By the time the train enters Katherine, lush green foliage intersperses the arid land and then you know you have arrived in the tropics.

Who are your fellow passengers?

Obviously every trip is different, but as a rule there will be more of an Australian contingent aboard the Indian Pacific whereas The Ghan attracts more foreign tourists attracted to the Red Centre outback experience and a taste of indigenous culture.

Besides cost, the biggest difference between the classes is space (a Platinum cabin is about twice the size of the Gold) – and size can matter over a several-day train journey. The bed in Platinum class can fold into a double whereas in Gold class you get two single fold-downs.

The extra premium of Platinum gets you a larger en-suite (the Gold class one is little snug), bigger windows, free transfers (within 50 kilometres of the terminal), more luggage allowance and access to the Platinum Club Car where there are more comprehensive wine and food options.

The bottom line – Battle of the Highlights

Megan: Alice Springs, a town of extraordinary character and intrinsically Australian landscapes of deep-red dirt and sage-green scrub. Here we enjoyed a trek at Pyndan Camel Tracks with the majestic MacDonnell Ranges as our backdrop.

Steve: Crossing the Nullarbor, indeed the whole country is a highlight in itself. A traditional trackside outback lamb roast dinner under the stars at Rawlinna, a seriously remote sheep station on the Nullarbor, will blow your senses – especially the tastebuds.

More details: For more information on The Ghan or the Indian Pacific see Great Southern Rail