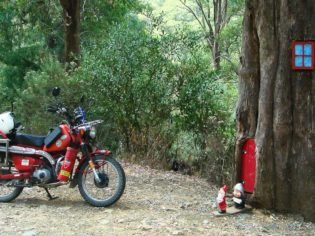 Guest blogger Jacqui Kennedy is an adventurous soul who for the past year has been riding a ‘postie bike’ 25,000 kilometres around Australia. Here she shares her favourite experiences on the road  – and her love of the iconic Australian letterboxes…

Having spent many years touring on scooters to unlikely places, including the Swiss Alps, people kept telling me to “get a real bike” – so I did.

I bought a CT110 ‘Postie Bike’ and called him Mo – top speed 80km/h when unloaded but as I’ve never subscribed to the less-is-best method of packing, he is an underpowered, overloaded little beast which steers like a washing machine. Did I mention that I like a challenge?

I like pushing the envelope and ‘tilting at windmills’. I like to encourage people to exit their comfort zones and not become the victim of media and marketing propaganda. You don’t need a big bike and a lot of money to have an awesome adventure.

I am an adventure travel junkie. I have been feeding my habit by taking Mo 25,000km on a wonky kind of figure 8 from New South Wales, through Victoria, around Tasmania, up South Australia through the Red Centre to Northern Territory and then down the west coast of Western Australia. I am now half way round with the Nullarbor and Queensland calling. Another year on the road should complete the journey.

Mo has a mischievous nature – he gate-crashed a wedding at the Big Lobster; he’s done a lap of the Mount Panorama race circuit; he got his butt kicked by Mother Nature on the Oodnadatta Track, where we were stranded for 6 days; he blushed with embarrassment when I went naked at the Pinnacles and scared the Japanese tourists; and he upstaged Will and Kate at the Big Rock.

The beauty about a slow lap around the Great Aussie Block is that you get to stop and see more than just the endless ribbons of bitumen. The country is littered with unusual signs, funny statues, weird landmarks and of course Big Things.

Most of all though, I like spotting weird and wonderful letterboxes. I love that, without any intention of personal gain, people will spend the time and energy to create something extraordinary out of an everyday object and that they would rarely receive the kudos or see the smiles they bring. They do it “just because” and that’s delightful.

These are the type of people who embrace life; who have interesting stories to tell; who invite you home to share their lives; who infect you with a spirit of mischief. These are my people.

1. The Piranha: Denmark WA. This one is my favourite because of the work that went into the design. It would make it difficult to deliver bills.

2. Eiffel Tower: Perth WA. This was part of an elaborate farming property entrance with an Eiffel Tower on each side of the gate which read “Beware of the Owner”

3. Gnome House: Mt Buller, Vic. In the base of a tree on the side of the road up to Mt Buller lives a little gnome family with a little gnome letterbox. We left our calling card.

4. Mini House: Penguin Rd, Tasmania. A letterbox built in the same style as the house.

5. The Still: Wilmot Tasmania. About 50 elaborate letterboxes adorn the roadside into and out of Wilmot as a tourist drawcard. The whole town seems to compete for the funkiest box.

6. The Spider: Wisemans Ferry NSW. Never mind the spider on the dunny seat

7. Pork Plane: Deloraine, Tasmania. Pigs might fly on this letterbox.

8. Ned Lives: Spencer, NSW. Such is Life – Ned Kelly features quite frequently all over Australia. I have at least 6 in my collection.

9. Colours by numbers: Sprent, Tasmania. This group of boxes hints of a tightknit community in the mountains near Forth. Each box has the lot number – except the purple box, which simply says “Justin Case”.

10. The Embassy: Canberra, ACT. This might just be the most important letterbox – outside the Aboriginal Embassy on the lawns opposite old Parliament House.

You can keep up with Jacqui at her blog Postie Notes.