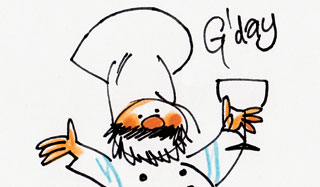 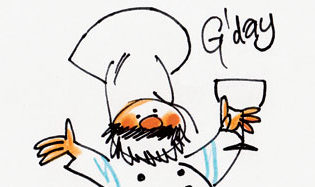 Peter Russell-Clarke charts the origin of the humble spud in Australia, and weaves a tale of wartime struggle, deception and aerial acrobatics . . .

I adore potatoes. Not just their subtle flavour, keeping capacity, fibre content and adaptability in pot and pan, to say nothing of ease of growing, but also the enthralling history of living and surviving among the Incas of South America; their journey back to Europe with Cortez; their romance with Sir Walter Raleigh and his on-again off-again love affair with England’s Queen and her aversion to puddles. How the gentle folk of Ireland depended on them, eating, as the average family did, 4kg a day. Then the Irish spud picked up a disease and so the good folk of that fair land starved or left the Emerald shores to set up Tammany Hall in New York, or became policemen in that boisterous city. Or they came to Australia and opened up our horizon with their axe and mattock while the English fopped about in Sydney Town.

One such family were the O’Hagans, another the Roneys. The O’Hagans travelled from Sydney with Hume and Hovel, but sensibly abandoned the expedition in the Snowy Mountains, taking with them a sack of potatoes. Both the O’Hagans and the potatoes prospered in the healthy environment of those mountains. How the Roneys chose the area I don’t know, but I do know they also held the pratie in great reverence. During the turmoil of the WWII, the young sons of the O’Hagans and the Roneys donned the khaki and web belts and marched, somewhat out of step, to deter the adventurous sons of Nippon, who, our boys reasoned, knew nothing of spuds and so would bugger their flavour with raw fish.

The results of the conflict are well recorded; some of the stories that immediately followed the cessation of hostilities, to my knowledge, are not.

Our strapping lads of the AIF marched home with a jaunty stride and in step. But to step into what, they asked after the initial jubilation subsided. “We’ll plant spuds,” the O’Hagan lads laughed. “And so will we,” joined in the Roneys. And so they set to work on their separate blocks. They borrowed tractors and rippers and got seed potatoes from the big commercial grower on the other side of the mountains. “We’ll corner this market, as well as sell into the Wagga and Cooma markets,” laughed O’Hagan. “And Gundagai and Yass and bloody everywhere else,” followed on Roney. And so they worked from sun up until the kookaburras cackled the close of day.

But it wasn’t only the AIF lads who returned. Some towns had RAAF flyers dump their sausage bags of souvenirs on their parents’ kitchen tables and told tall tales of dogfights and scrambles, which didn’t include egg. It was only natural that the Army boys and the flyboys shared a beer and yarns of the Desert Fox being out-foxed. The local bank manager in our small country town had a son who flew spitfires in the Battle of Britain and, because of his derring-do style and love of flying, he did what many returned flyers did in returning to the humdrum life of a tiny town: he took to the air again as a crop duster-cum-barnstormer.

Jim was a handsome enough bloke with soft blond hair and an RAAF moustache and, on hearing that the Roney boy was growing spuds, offered to spray the crop to kill off any bugs or beetles. “Remember,” he smiled at Roney, “your ancestors were wiped out with potato blight in the old country. You need to protect yourself from that now don’t you, old chap?”

“Bloody oath, mate!” replied the Army man, flicking a few more coins on the bar and smiling at the hopeful and homely girl behind the bar.

“Of course I’ll do it at mate’s rates and once your neighbour sees your wise decision being implemented, he’ll want me to do the same, eh what? He’s a tight bugger and won’t want to spend a quid, but he’ll have to, won’t he by Jove?”

They finished their grog and left, after agreeing that the Roney boy would leave old car tyres at each corner of his property so there could be no mistaking it. “Once I’m in the air it’s a bit hard to pick a place precisely and the old converted Tiger Moth bounces about a bit, so make it easy for me to find, old son.”

“Bloody hell!” Roney screamed his frustrated abuse as he chased the large dragonfly up and down the rows of potato sprouts. “You sprayed the wrong bloody block, you airhead!”

The buxom barmaid was intrigued by the talk of aeroplanes converted to hold fertilisers, insect repellent and other mysteries. She was enthralled to be so close to a handsome airman and a bronzed Anzac and told her old and faithful regular customers the next day. O’Hagan was standing just down the bar and so overheard the barmaid’s breathless story, whereupon he hurried off, flung himself into the saddle of his spirited quarter-horse and cantered out of town. That night, being the night before the Roney boys’ paddock was to be sprayed, he blackened his face and, wearing his dark Drizabone, silently rode off to the Roneys’ paddock. He removed the signpost car tyres and placed them on his own paddock’s corner posts, with the intention of replacing them after the spraying was done. So, of course, the next morning, when our daring airman dropped from the sky, he spotted the tyres and swept above the sprouting potato plants, spraying as he went.

“Bloody hell!” screamed Roney from his paddock. He’d arrived early to watch the show and saw his tyres had mysteriously moved and that the bi-wing plane was skimming O’Hagan’s potato patch. “Bloody hell!” he bellowed again as he raced his little mountain pony up the track and, with a touch of his spurs, leapt the horse over the barbed wire fence and after the plane which was spewing white powder from its underbelly. Roney screamed frustrated abuse as he chased the large dragonfly up and down the rows of potato sprouts.

The flyboy pilot was too intent on his work to look in his rear vision mirror and so, when Roney fell off his horse, both being full of spray, he didn’t notice the event. But next morning, when the Roney boy barged into the bank’s residence, he yelled for the pilot who appeared with a smile as he handed over his invoice. “You sprayed the wrong bloody block, you airhead!” shouted Roney. “Someone moved my bloody tyre markers!”

“Not my problem, old sport,” smiled the airman a moment before Roney smacked him across the chops with a rolled copy of the weekend Rural Times. The airman reacted instinctively by belting Roney behind the ear, before kneeing him in the groin and stuffing his invoice in his gasping mouth. It turned into a right old riot before the police sergeant arrived and sorted the protagonists out.

O’Hagan shamefacedly copped to his part in the affair, begged forgiveness and paid the airman’s invoice. As a show of good faith, the flyer sprayed Roney’s block for nothing, and the two AIF heroes worked together to harvest each other’s blocks. Good result you’d think, eh? No. The spuds that were dug up were black, soft, and smelled. They were rotten.

The two boys raced their horses into the bank. But the handsome, blond, blue-eyed ace had flown off to become a barnstorming attraction at a myriad of country council fundraising days. And it is true, so they say, that a few days before he’d flown the coop he did pick up a load of crushed white clay, which he never paid for and which he’d said he was to use as a lining for his dam. But our gallant flyer didn’t have a dam. Or, it would seem, give one.

No-one knew what he did with the dried, crushed clay, except for two AIF blokes who were too embarrassed to breathe a word.