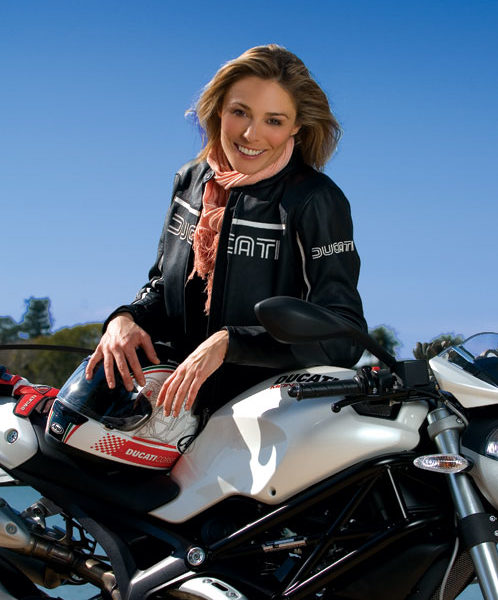 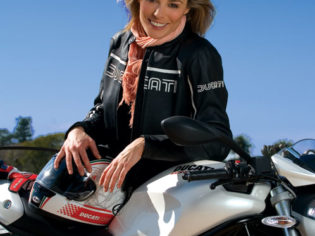 Zoe Naylor has taken her first tottering steps in a lifelong love affair with a motorcycle. So if you’ve been tempted by the thrill of the ride and the wind in your hair, hop on and hold tight.

A year ago, if you’d told me that today I’d be riding my very own Ducati, I wouldn’t have believed you. I grew up peppered with horror stories about terrible accidents that scared me off ever entertaining the idea seriously. But later in life and living in Bondi, my partner at the time decided he wanted a scooter to make travel to and from work simpler. So we decided, as a romantic couple thing, to get our licences together.

Suddenly my mind was opened up to the potential for new and exciting travel possibilities. I fantasised about becoming the next Mr and Mrs Smith, riding our matching BMWs through the Adelaide Hills to the Barossa, discovering Tasmania with the wind flying through our hair, or cruising the Great Ocean Road on a Harley.

We completed our learners together, then bought a Vespa 250 GTSie. My partner rode to work every day but I was too scared by the traffic and ended up not riding the scooter at all. My licence lay dormant for the best part of a year.

Then it came time for P-plates. I was no longer seeing the same guy and had three months to go before my Ls expired. It seemed a waste to let the whole thing slide, so I decided to complete the post-learner course and get some private tuition to help build confidence. It was the best thing I ever did. Using the school’s Honda 250 I sat my Ps – one of the most nerve-racking experiences I’ve endured in a long time – and passed.

Then I finally took the scooter out. But, since I’d now had a taste of riding a manual, this scooter nonsense just wasn’t going to cut it. I found myself craving the feeling of a more powerful bike hugging the road. It was time for an upgrade.

As a woman with few motorcycling friends, I had no idea where to start when it came to choosing a bike. I was steered towards a copy of the Australian Road Rider Bike Buyers Guide, which lists every bike available in the marketplace. I figured if I at least narrowed down the bikes I liked the look of, even if I had no idea about the specs, it would be a step in the right direction.

During these early stages I looked at Harleys, Triumphs and Ducatis. I loved the retro look of the Harleys, but figured if I was going to embark on a lifelong motorcycle journey, perhaps that was a bike I could grow into after I’d tried some sportier styles.

Then I went to Fraser Motorcycles in Concord. And this is where my life changed. Not since Cosmopolitan Shoes in Double Bay have I fallen in love with a store so deeply. Ladies, I never knew shopping in a motorcycle store could be so much fun! They had the full range of Harleys and Ducatis, which made early comparisons that much easier. Once I settled on Ducati, the next issue was which one? Obviously there was no point putting me straight on an 1198, even though I’m in love with that bike, so taking all the elements of style, safety, power and feel into account, I felt drawn to the pearl Monster 696 as the bike for me.

I’m no Casey Stoner (yet). I’m a safe, cautious Ducati rider, if there is such a thing.

When the time came to collect my new bike (yeeaahhhhh), I still felt a little nervous about facing Parramatta Rd in peak hour but the team at Frasers were more than happy to deliver it to my home. I’ve never been more excited. It was the best present I ever gave to myself and I now fully appreciate why victims of midlife crises often splash out on a bike.

I began with slow, steady rides around Centennial Park, which led to rides around Queens Park, then to Bondi and the city until finally I rode out to Oran Park Raceway and was able to let her rip. It was scary, exhilarating and everything in between; just what I needed to build my courage in traffic and advance to the next stage of my riding. You know you’re alive when you’re burning down the M5 on a Ducati with a semitrailer sitting right next to you. I don’t think I felt the fear, nor the adrenalin, subside the entire way there.

Now I’m at the stage where I honestly feel like I’m having a love affair . . . with my motorcycle. I often go down to the garage just to look at it (sad, I know) and every time I start it up and hear that whirrrr of the Ducati engine I can’t wipe the smile off my face.

As I write this, I’m in Hervey Bay shooting a film called The Reef and I miss my bike so much that I’m having it trucked up here. So if you’re thinking about getting a motorcycle, what are you waiting for? It has transformed my experience of being on the road; it’s cheap to run, easier to park and so much fun.

I finally understand the immense feeling of freedom a motorcycle gives you. I’m no Casey Stoner (yet). I’m a safe, cautious Ducati rider, if there is such a thing. I’m not sure if long trips and spending hours on the bike are my thing, but I definitely look forward to discovering parts of Australia on a motorcycle. Take the plunge, people, and I look forward to seeing you on the road very soon.