The secret life of Claudia Karvan 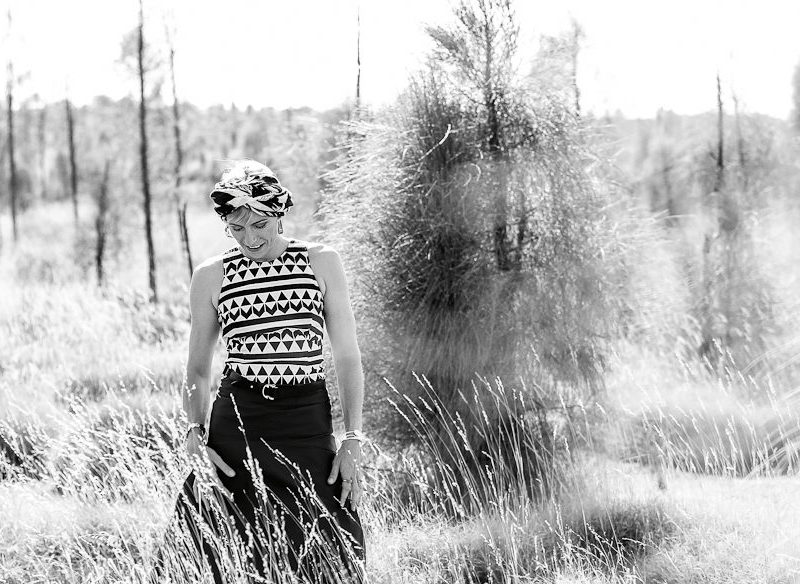 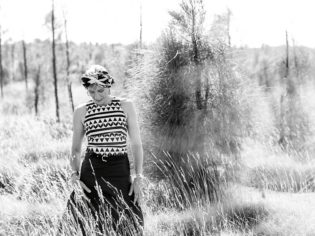 Claudia Karvan buys a mean gift. “What do you get the guy who’s got everything?” she asks rhetorically.

She’s recounting the story of choosing her husband, Jeremy Sparks’ 40th birthday present, a process that, considering their long history, could have easily been a non-event but she was already prepared for.

The two have known each other since Karvan was 16, after all, even if they were housemates for ‘a couple of years’ before they got together. (“It was a big surprise to both of us and even more of a surprise that it’s endured 20 years,” she observes later.) She came through with the goods, though.

“A beehive,” she grins, mischief written on those familiar lines. “I bought Jez a beehive. It’s hilarious. We’ve been making honey for the last five or six years.”

Walking her own path

If Karvan’s resume suggests she’s the kind of woman who walks her own path, this conversation does nothing to deter the impression. It’s this that made her an obvious choice for Australian Traveller, actually (though those cheekbones didn’t hurt).

Even if most of us still identify with Karvan mainly as Alex in The Secret Life of Us, bumbling her way through her late twenties (or even younger, natch, as the romantic foil to ’90s heartthrobs Guy Pearce and Alex Dimitriades, in films such as Dating the Enemy and The Heartbreak Kid), Karvan has quietly evolved into something of an activist for the Australian arts industry over the years; a writer, producer and director who also happens to be an industry leader on some of the art scene’s most urgent topics.

But back to the bees. Karvan has whipped out her phone and is now scrolling through the family’s honey-making escapades, sharing insights into her life (and phone) with surprising freeness.

Here’s a photo of nine-year-old son Albie holding frames of the honey; there’s the big galvanising bin where the honey is spun; here’s a picture of Sparks, grinning next to the frames.

Then she scrolls too far, and a behemoth skate ramp appears on the screen. It’s the kind of thing my mother would have died before letting me go near. Karvan had it installed at the family’s NSW farm, specially for her kids.

“It’s like 4.6 metres tall or something,” she says, with a trace of pride. “[13-year-old daughter] Audrey’s really good, she can get really high.”

It’s probably Karvan’s own unconventional childhood – her stepfather, Arthur Karvan ran Kings Cross’ nightclub-of-the-decade, Arthurs; Karvan was a regular fixture in the club on weekends – that laid the foundations for what seems to be a solid sense of self.

Take her decision to remain in Australia; a move most modern actors now reject, in favour of the siren call of Hollywood. Her agent’s reaction to her decision was less than ideal, Karvan remembers; she was told she’d have to make her own opportunities if she wanted to stay here in the homeland.

“That was a despairing thing to hear,” Karvan recalls, brushing back her fringe. “As an actor, often the mindset is that you are dependent on other people to generate work for you and this is a very small industry. The task of having to initiate something just seemed absolutely beyond me.”

She stayed anyway, and the opportunities appeared. And kept appearing.

It’s been a week since we returned from Uluru; Karvan is looking decidedly less dusty today, in a black collared shirt and tan skirt.

We’re breakfasting at a trendy café in her home neighbourhood, the inner-city suburb of Redfern; she has ordered French toast and is eating with enthusiasm. It’s a surprising choice for someone who seems so sensible – or maybe it isn’t.

Karvan is pragmatic about most things – it’s hard to imagine her ever indulging the idea of a diet, or the serve of self-loathing that usually preceeds one; perhaps she’s pragmatic about pleasures, too.

It’s a good word for her: sensible. My notes on her include other, similar words like that to describe her; terms like humble and earthy, and that adjective all publicists yearn for, for their clients: grounded.

Take this for an example: when Karvan arrived at Uluru, she learned that her make-up artist’s baggage has been left on the tarmac in Sydney. “Oh well,” she said, unfazed by the obvious repercussions. “I’m sure we’ll work something out.”

And we did. (The make-up eventually arrived the following day; she made do with limited supplies and borrowed hair-styling tools until then.)

You can only imagine how that scene might have played out with another actress. Karvan’s biggest roles, however, are arguably the ones she plays off screen.

She has become increasingly involved in the process of telling Australian stories from behind the camera, having just wrapped the Gina Rinehart biopic (airing on the Nine Network later this year), a tale she wanted to tell in order to “dimensionalise those people”.

It is the first show she has produced without being front-of-camera at all (“it was nice to be lying in bed at five in the morning instead of being in a make-up chair,” she says. “Something I’d like to do again.”)

She has been instrumental in creating new careers, too, as a patron of the annual Natalie Miller Fellowship (a female-only grant awarded annually to a promising individual in the production world) and previously as a member of the judging panel of the female-only literary Stella Prize – although I’d hazard a guess she has participated in both for their contributions to society as a whole, rather than a gender-specific agenda. (“I just wanted to support writers,” she clarifies later, seemingly in agreeance with my hunch.)

She is also a board member of Screen Australia, the federal government’s key funding body for local productions. It’s a suitable role for her, considering her fiercely protective stance on local industry; she has been particularly vocal about the need to keep local acting roles local for years.

“Look, I don’t believe in holding one position forever, but so often the overseas actor is seen as the silver bullet to solve a production’s woes,” she says on the topic.

“It’s like when Geoffrey Rush won the Golden Globe, and he famously said, ‘and this is to all the people who wanted to fund Shine if I wasn’t in it’. If we didn’t have protections in place we probably wouldn’t have our Heath Ledger and Jacki Weaver, Geoffrey Rush, Rachel Griffiths, Toni Collette. All these extraordinary actors who are now storming the world… We wouldn’t have created all those careers.”

The ultimate aim, she says, is to foster a healthy industry that can withstand global pressures. Whether that will eventuate, though, is debatable.

“No one’s got a crystal ball,” she muses. “I can paint you one bleak picture, that it’s all [online] streaming, and that means there’s no way to regulate the content control. Streaming just blows the field wide open… we are going to have to command the Australian population’s attention, and the world’s, with our own storytelling.”

Which is something we’ve already begun, she adds. “A lot of our productions are being remade in America, which would never have happened decades ago.”

It seems to be that it’s the younger generations who are finally paying much more attention to our own stories, I suggest, citing the success of productions like Underbelly, Paper Giants, Never Tear Us Apart, and Howzat! Kerry Packer’s War, which resonated well with Gen Y audiences.

She shrugs. “I think there’s just strength in numbers, maybe.”

Really? It’s not a sign that Australia is evolving? That we’re starting to celebrate who we are? That cultural cringe is fading, that we’re growing up as a nation?

I had been hoping, in this interview, to gain some kind of rare insight into modern Australian culture, some new kind of paradigm from which I could draw preliminary conclusions about the development of Australia’s maturing arts scene, but despite Karvan’s obvious intelligence, and love of her craft and country, she doesn’t seem particularly prone to navel gazing, or the grand conclusions one draws from such an indulgence, either.

She’s more from the live-in-the-moment camp; just doing what she’s doing, instincts guiding her from project to project with steadiness and grace.

Ask her about our continent, however, and she becomes more animated. “I don’t think I’ve ever wanted to spend a lot of time away from Australia and away from our open spaces and access to nature and wilderness,” she muses, when I ask how her nationality has informed her career.

“Being in the bush, it restores you mentally, physically… going to [places like] Uluru, you get this extraordinary and mighty energy that you can’t quite quantify but you’re absorbing through every pore.”

This was her first trip to Uluru; she enjoyed it immensely. “How are the stars?” she says with admiration. “I’ve never seen a sky like that; it wasn’t a sky I even recognised.

It was [also] very special to get an insight into the Anangu traditions and appreciate how sophisticated the caring for the land. It’s beautiful to see the change of the approach since 1985.”

It has changed, I agree; modern Uluru is an experience with depth.

“Just that brashness and the ignorance [of the past]. Thank God we’re moving away from it. I think the most comforting thing to hear, was the understanding that the Anangu people would prefer that you don’t climb Uluru. That 75 per cent [of visitors] choose not to is a huge endorsement on the human race, I think, and hopefully that number will keep reducing, because it all comes down to respect, doesn’t it? Respecting other people’s values and acknowledging our past.”

She pauses for a moment – but only a moment. “Whatever we can do to make up for our terrible past, we’ve all got to do it. It’s got to be in the front of our minds, all the time in Australia. It’s a real blight. I think there’s still a lot of guilt and discomfort within the average Australian.”

As our meeting concludes she pushes her plate away, French toast half eaten, and gives me a brisk, but generous hug before getting up to leave. It’s Karvan in a netshell, that hug – genuinely sweet, minus any false sentimentality.

A certain beehive springs to mind…