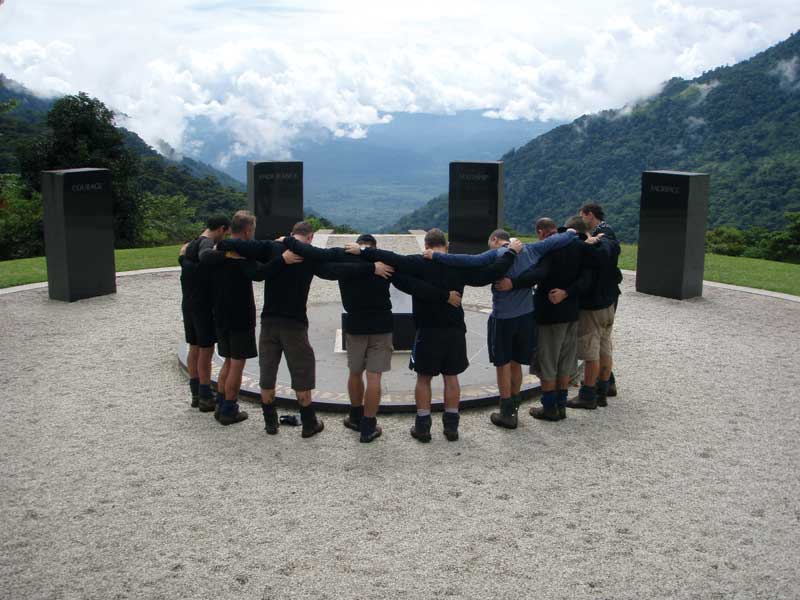 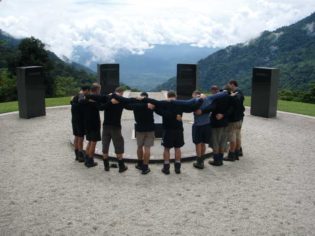 The spirit of Kokoda – courage, endurance, mateship and sacrifice – reverberates through the forests of the Gold Coast hinterland each year during the gruelling Kokoda Challenge. Stu Lloyd explores the unique headspace you need to be in to take on one of Australia’s toughest endurance events.

At Isurava, overlooking the dramatically misty Yodda Valley along the Kokoda Trail, stand four black granite pillars engraved with the words: Courage. Endurance. Mateship. Sacrifice. They are a reminder of the qualities that enabled our Diggers to turn around the rampant and numerically superior Japanese in WWII, and gave birth to the legend of Kokoda.

But this story is not about Kokoda. It’s about the spirit of Kokoda: for “Kokoda” has become synonymous with a certain fighting spirit against overwhelming odds. Ticker.

Some 2000km south of that “bastard of a place”, at Nerang in the Gold Coast hinterland, 1200 masochistic contestants dig deep each July to participate in the Kokoda Challenge. The course skirting Lake Hinze is 96km (the same distance as Kokoda to Ower’s Corner) and the time limit given for teams to complete it is 39 hours – in remembrance of the 39th Militia, the first of the Aussie troops to reach Kokoda.

The event came about as a result of the Hon Charlie Lynn, MLC, speaking of the battle of the Kokoda Trail at an RSL conference. The not-for-profit Kokoda Challenge Association was formed by Doug Henderson in January 2005 to promote the Kokoda Spirit and benefit Aussie youth at some sort of crossroads in their life. Last year’s event raised nearly half a million dollars.

The inaugural outing in 2005 saw 76 teams of four front up. One of the organisers, and participants, was John Nalder, whose father fought on the trail that John, as a trek leader for Adventure Kokoda, has now hiked more than 30 times. The GC course replicates the Kokoda Trail from south to north quite uncannily, being an ever-rising series of peaks, with the highest point about two thirds in before plunging down to the finish. The checkpoints are named for villages along the Kokoda Trail. Charlie Lynn, whose father also fought on Kokoda, followed his dad into the army. “I spent a fair bit of time training in the hinterland around Canungra,” Lynn says. “While the terrain can be as tough as Kokoda, it’s not as rugged or unrelenting.”

“Sixty per cent of it is mental,” says Nalder of the GC Challenge. “If your head’s not there when the going gets tough, you’ll struggle. At 3am when the cold wind is blowing, you’re right up against it.” Lows of around three degrees when the Last Post sounds at the race start are not unknown. “That comes back to why you’re there . . . remembering what the young men went through back in 1942 helps provide perspective and drive.”

And it’s exactly that spirit which now attracts 300 teams from all over Australia, and even Papua New Guinea, each year. Some are super-athletes, porters, students, descendents of Diggers, serving soldiers, and family groups in it to fundraise for a good cause.

In 2007 Kokoda Trekking put several teams in, one of which was KTL Elite. It comprised the four fastest men to ever cover the Kokoda Trail: Brendan Buka (an astounding 16hrs 34mins), Wayne Urina, Horace Yuaga – all PNG porters – and “honorary wontok” Damon Goerke, the fastest white man to cross the Trail. You’d think they were a shoe-in to win. But no. “Competing in a team-based event is a lot different to running it individually,” explains Goerke. “Over the 96km everyone goes through a bad stage at some point, and it takes experience to manage yourselves to stay consistent. You have to make sure everyone’s eating and drinking and not pushing themselves too hard, which may hurt them later.” Support crews at checkpoints ply their teams with a fuel-rich nutritional nightmare of chocolate, donuts, chips, pies and Coke. Then . . . drama! “Horace cramped at 5km,” recalls Kokoda Trekking proprietor Gail Thomas. “Brendan and Wayne were getting pissed off with him for dragging the team. They spent most of the time waiting at the checkpoints.” The super-team finished in fourth place.

Typically, endurance-running legend Don Wallace’s Nike Hammer team takes line honours in around 12 hours. But for every Don Wallace there are many ordinary punters straggling in under the deadline. Like 42-year-old Peter Shellam and his workmates, who slogged it out for 28 hours. Why? “For the fitness and the challenge of pushing your body and mind beyond the norm,” says Shellam. “Few, if any, had walked that distance in one go so there was trepidation about whether or not we’d make it.” For many, the most gruelling part is the steep climb to Syd Duncan Park. Shellam found the steep sections around the Environmental Centre in pitch black the toughest. “Every step required extra concentration and effort from tired and aching muscles.” He also found the final section very difficult: “Every kilometre feels like it’s two.”

The bonding and camaraderie is what sticks. “It doesn’t matter what team you belong to,” says Shellam. “Everyone is friendly, jovial, supportive.” Then there was the famous incident when the 41 Artillery Battalion’s brigadier marched 6km into the jungle hefting a slab of beer on his shoulder for his boys, only to be told they couldn’t possibly dream of drinking a beer.

The event attracts celebrities such as Olympians Duncan Armstrong and Nickey Carroll. Carroll, a marathon runner, said it’s “a challenge adventure racers dream of, where pain meets ecstasy and mind over matter is everything.” Strange dreams! But it was rugby league legend Mal Meninga who provided one of the Challenge’s most inspirational moments. “Seeing Mal finish, he’s a big guy and I’d hate to have to lug that frame up and down all those hills,” says Goerke. For his part, Meninga claimed it was “the toughest mental challenge I have ever endured.”

At the finish line, Kokoda veterans greet the racers in a poignant tear-jerking finale, and the four pillars of Isurava resound through the Queensland bush. Maybe now they’re ready to tackle the real thing? “Kokoda is the world’s toughest history class,” cautions Charlie Lynn.

The Spirit of Kokoda

Of the thousands of unsung struggles of the Diggers on Kokoda, two stand out as truly heroic: Private Bruce Kingsbury and Corporal John Metson. The scene at Isurava in August 1942 was bleak as 6000 Japanese soldiers stormed towards Port Moresby – next stop Australia? With the beleaguered 39th Militia in danger of being overrun, Kingsbury – a 24-year-old from the 2/14th – rushed forward bare-chested, firing his bren gun from the hip, clearing a path through the enemy for the platoon to withdraw, inspiring his men to recapture the precarious position. From behind a massive rock he swept enemy positions, accounting for dozens of Japanese before a sniper ended his heroic stand. The citation for his Victoria Cross reads: Private Kingsbury displayed a complete disregard for his own safety.

In that same action, Metson was shot through the ankle. Unable to walk, he and dozens of seriously wounded were stretchered back along the Trail. Metson insisted he didn’t want to be a burden, so decided to crawl instead, his hands and knees bandaged for protection. He tended to other worse cases, adding good cheer where he could, although he and the men were wounded, dehydrated and starving after three weeks on the move. At Sangai village, it was decided to leave all stretcher cases behind while help was sought from Moresby. This position was soon overrun by the Japanese, who murdered all, including Metson, in cold blood. He received the British Empire Medal. And that, dear readers, is the spirit of Kokoda.