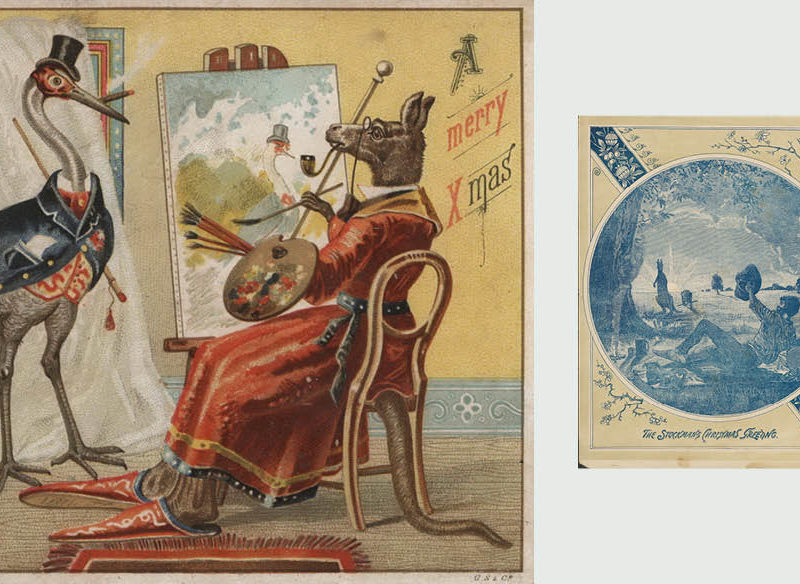 A compelling but little known Australiana story is that of early Aussie Christmas cards. Large-scale production of Christmas cards began in the UK in the 1870s, and before long they were being shipped for use in the Australian colonies.

But the incongruities between the snowy scenes depicted and the reality of Christmas in Australia were as glaring as the southern hemisphere sun; and naturally local cards emerged that offered a truer representation.

It is believed that the first such examples were 12 beautiful prints of native wildflower paintings produced by the artist Helena Forde, nee Scott, in 1879.

The following year, Helena’s sister Harriet Scott produced a similar set (the Scott sisters were renowned for their botanical illustrations).

These images, overlaid with festive wishes, would have been reproduced as single sheets; the folded greeting card we’re familiar with today didn’t emerge until the 20th century.

They were advertised and sold through newspapers and journals, such as The Sydney Mail and The Australasian Sketcher with Pen and Pencil.

The 1880s proved to be the heyday of the Christmas card and other imagery depicting festive life in Australia followed: picnics in the bush, ocean views, and even a frocked up kangaroo painting a portrait of an emu in a top hat and tails.

They would allow people to illustrate the difference of their experience to loved ones back in the UK, and help to consolidate national symbols in the years leading up to federation.

“I think [that] the 1880s publication spree was an expression of an already growing national identity, especially in the lead up to the 1888 centenary of Australian colonisation,” says Megan Martin, Head of Collections at Sydney Living Museums.

A handful of these cards can be seen in the 19th-century scrap album of Bessie Rouse at Rouse Hill House, part of Sydney Living Museums.

Even though early Australian Christmas cards were often beautiful artworks in their own right, they were considered pieces of ephemera and as a result, weren’t saved or preserved in the same way.

Examples of early Australian Christmas cards are rare artefacts these days, but the precious few that are held in collections, such as the Josef Lebovic Gallery and The Hamilton Rouse Hill Trust Collection, offer a window into one of the ways that Australia forged its own spirit.