The weirdest (and funniest) place names in Australia 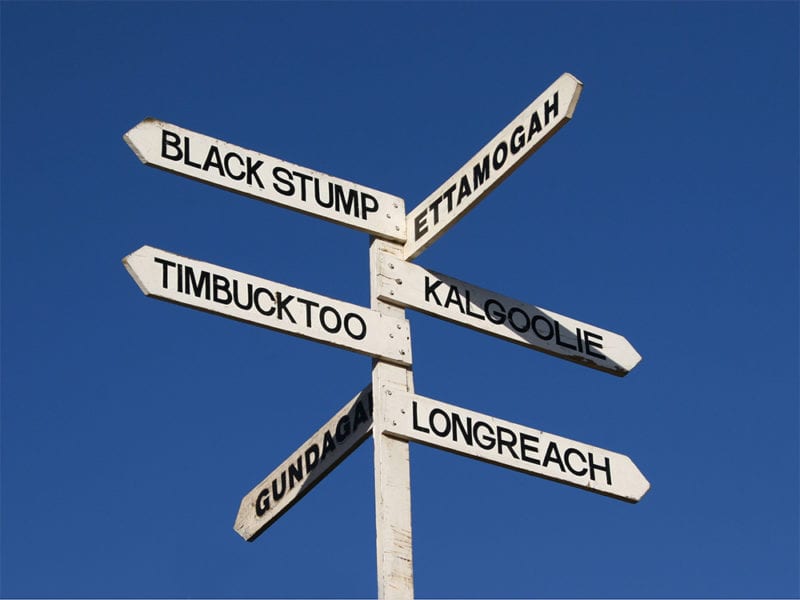 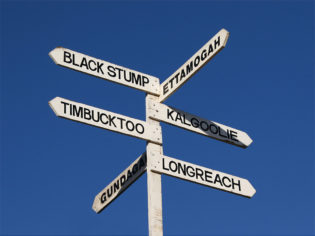 There are some weird and wonderfully named places and landmarks out there beyond the back of Bourke. AT swears all of them are real, unlike the mythical BrisVegas or Ballafornia. Each and every one can be found scattered somewhere across this ochre landscape we call the outback.

Useless Loop was named on Nicolas Baudin’s expedition of 1801-1803 by Henri-Louis de Saulces de Freycinet (not to be confused with his more famous navigator brother, Louis-Claude de Saulces de Freycinet). The impetuous Frenchman gave it the name “Havre Inutile”, or Useless Harbour, because a large sandbar blocked off any boat from entering, thus making it useless. But he was wrong!

The cove at Useless Loop has since been transformed into a solar salt farm that offers the world the highest-grade salt available. That’ll learn ya, Henri-Louis de Saulces de Freycinet!

Situated in the Pilliga region of NSW, George and William Colless were plesantly surprised when they stumbled upon a large vacant block, whilst originally en route somewhere more promising, and were able to buy it. The two men were compelled to don the station, Come By Chance, and the station grew into a town and somewhere along the way added a race club.

This small town was the first to arise on the banks of the Namoi River and is the birthplace of the cotton industry in Australia. Given that the area is blanketed by what appears to be a white Christmas of cotton blooms in April, the Aboriginal meaning of Wee Waa is anything but chilly and tranquil. It is, ironically, “Fire for Roasting”.

Somewhere out there, locked in a tax-funded office, a group of busybody do-gooders is plotting the downfall of our most politically incorrect place names. Up near the top would be not one, but two Chinamans Knobs!

But they’ll have their work cut out for them. According to Geoscience Australia, there are some 364 place names with the word Chinaman and some 624 with Knob. Don’t believe us?

There have been many fanciful tales on how the Gunbarrel Highway got its name. Not least because of marauding gangs robbing settlers at gunpoint. Nor the fact the highway was the main service point to weaponising the Woomera atomic testing facility in the 50’s and 60’s.

Instead, the Gunbarrel Highway got her name from the chief surveyor, Len Beadell, who liked to draw as many double straight lines as possible to maximize fuel efficiency and joked that his team would be called the “Gunbarrel Construction Company.” The name stuck.

Never has Australia’s love of a punt been so obvious. Marvel Loch is a small, outback-dwelling town located nowhere near a lake, river or a body of water of any significance, let alone a Scottish Loch of the marvellous variety. Instead, Marvel Loch, a mining town, began life in 1906 and was named after the winning horse of the 1905 Caulfield Cup.

Never has a town been so misleading in its naming. Travel to this place with your snowboard or skis and you’ll risk being bitterly disappointed. Not only are there no mountains, but you can also forget about the fluffy white stuff.

Instead, this typical country town is plopped smack bang in the middle of a flat, fertile wheat plain. It was named on a whim by the then State Governor in 1878, after his friend, Thomas Snow. Once again, nepotism leads us astray.

How can a town famous for dolphins be named after monkeys? There’s no debate that “Mia” is the local Aboriginal term for home or shelter, but after that it gets a bit murky. Some believe it was simply named for a schooner called Monkey which may, or may not, have moored in the bay.

Others believe it comes from local pastoralists’ slang for sheep. The more fanciful tale has it that Malay pearlers brought pet monkeys with them to work, and Monkey Mia is named after one such simian that jumped overboard and attempted to swim ashore. Whatever the truth, AT promises to continue the search for wild monkeys in the surrounding hills. Just in case.