Everything you need to know about Australia's Big Banana 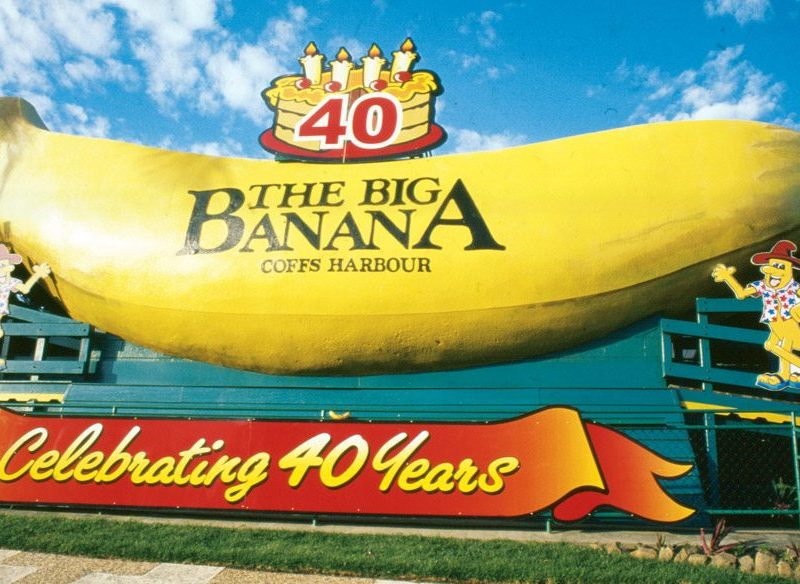 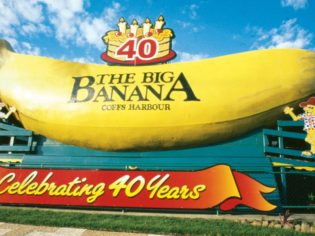 You could say it is almost a rite of passage for Aussie families on their annual road trip to make a pitstop at the Big Banana in Coffs Harbour on their way up or down the east coast of Australia, but why do we love the oversized fruit so much?

In 1995, the big Banana was voted the most bizarre and grotesque tourist attraction in the world by 200 globetrotting young Australians, edging out the Big Pineapple at Nambour and the Giant Penis seat in Amsterdam’s Sex Museum. It might not be everyone’s idea of a tourist attraction, but there is more to the Big Banana than meets the eye.

The size of the Big Banana

Many people think the Big Banana has shrunk, secretly replaced by a smaller version a few years ago. “We did move the banana a few metres forward and a metre or so higher in 1995 to give it better visibility from the Pacific Highway, but it definitely hasn’t shrunk,” says Rubie (the previous owner). “It’s just that people who come back to visit have grown up.”

What to do at the Big Banana

No mere monstrous foodstuff, today the Big Banana is an educational resource and home to a myriad of banana-based recreational and cuisine delights that attracts well over one million visitors each year.

You can go on a real banana bender in the souvenir shop, which boasts hundreds of balmy banana products, from the practical to the bizarre to the tasteless. Our favourites are the four different varieties of fridge magnets and the Big Banana water pistol.

Cool off at the Water Park

The Water Park boasts 7 slides, including open body slides, two-person tube slides and a 45 degree Kamikaze slide for the thrill seekers. For the younger crowd they have 2 inflatable slides and a kids water play area with a tower, 3 additional kids slides, interactive water jets, toys and tipping bucket. A family ticket for two adults and two kids is $66.

Go on the rides at the Big Banana Fun Park

The Big Banana’s indoor Giant Slide is the biggest slide of its kind in Australia, with 6 lanes, each 83 metres long and standing at 17.5 metres tall, this is not for the faint hearted. The competitive among us can race their loved ones down the slide with an interactive scoring system to report back who was the quickest. Prices start at $7 for two slides.

The 4D Ride Simulator gives visitors the choice between four films, including Moon Thunder, Dino Safari 2, Canyon Coaster and Wild West Mine Ride. Prices start at $8 for a single ride.

The Toboggan Ride runs wraps around the park for over half a kilometre, with views of the Pacific Ocean visible as you hug the turns and navigate your way around the track to the finish line. Prices start at $7.

You can also take a spin on the Ice Skating Rink, play a game of mini golf and fight it out in a round of Laser Tag.

History of the Big Banana

American entomologist John Landi loved Australia so much while on a six-month research trip in 1962 that he and his wife, Betty, decided to emigrate and purchased a five-hectare banana plantation at Macauley’s Headland, just north of Coffs Harbour.

Inspired by a large pineapple he had seen on top of the Dole Cannery in Hawaii, Landi figured a similarly bewitching banana would help promote sales at his roadside fruit stall. The local chapter of the Banana Growers Federation thought it was such a good idea they agreed to meet half the construction costs and the Big Banana opened December 1964.

In 1968 Landi sold his share of the business to his partner John Enevoldson, who kept it until 1988, when it was purchased by local entrepreneur Bob Johnson. Johnson acquired adjoining properties and undertook a $30 million redevelopment of the complex, turning it into a showcase for horticultural education. However, it all went pear-shaped, and Kevin Rubie and his wife Marie bought the complex from administrators in 1993. The couple went on to develop the Big Banana into more of a fun park by adding in the Wiegand Family Toboggan Ride in 1996 and the Ice Skating Rink in 1999.

The Rubie family and the development company Village Building Co. became joint venture partners in 2005. The partnership resulted in the addition of The World of Bananas Theatre and Tour experience, the Laser Tag arena, a 3 hole Mini Golf Course and the biggest Water Park between Sydney and the Gold Coast. As of December 2016, Village Building Co. became the sole owners of the Big Banana Fun Park after purchasing the remaining share of the business from Kevin and Marie Rubie.

Are you planning a road trip along Australia’s north eastern coast this year? Make sure you read our guide to where to eat, sleep and stay on the NSW North Coast.