The perfect Sydney itinerary for families 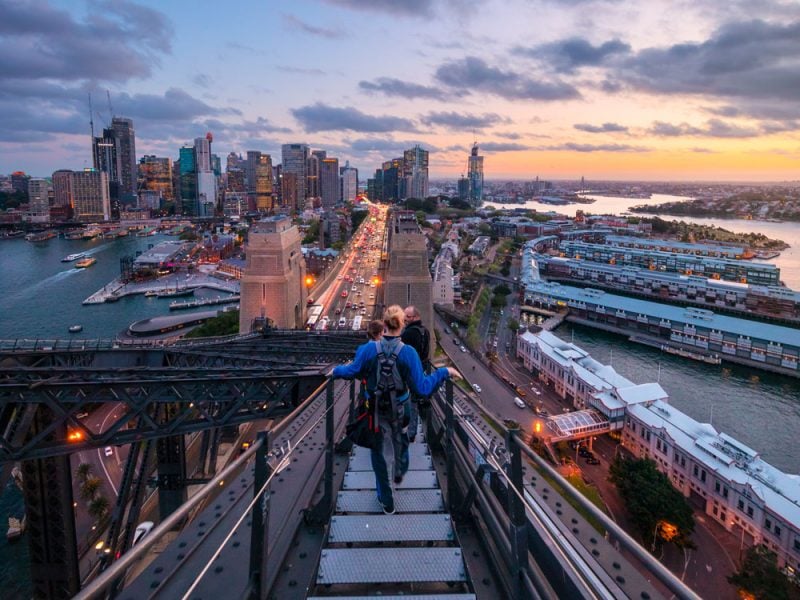 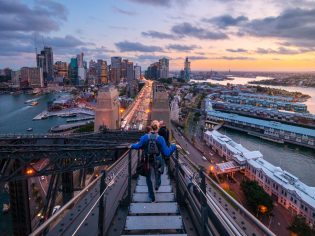 With bridges, parks, roller coasters and a certain Opera House, Australia’s most populous city is one of its most compelling to discover.

Start your day with a stroll around the city’s oldest neighbourhood, The Rocks, a delightful maze of cobblestoned laneways and centuries-old colonial sandstone buildings dating back to 1816. Set by the sparkling harbour, where water taxis, pleasure cruisers and ferries cruise this way and that, The Rocks is one of the city’s most charming and vibrant neighbourhoods. If you’re in the area on a Saturday or Sunday, be sure to browse The Rocks Markets for its handcrafted goods, gourmet food, local art and live entertainment. 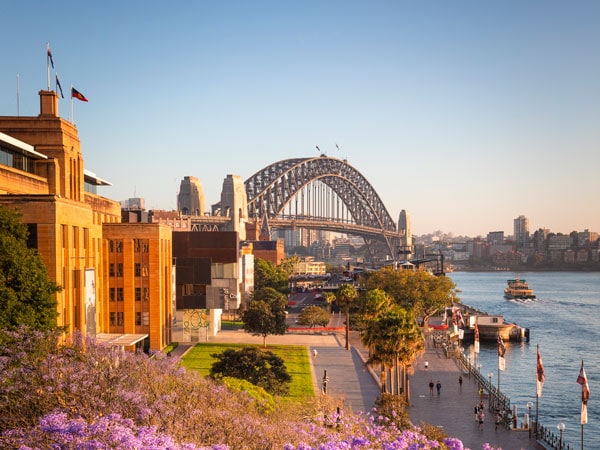 Iconic views down by the harbour. (Image: Destination NSW)

Jump on a train or ferry from Circular Quay to Milsons Point for an afternoon of thrills at Luna Park. This iconic heritage-listed park first opened in 1935 and has recently undergone its biggest transformation. It is set to reopen in late June after the installation of nine new rides, including three new roller coasters (in addition to the legendary Wild Mouse) and more rides for the littlest of thrill-seekers. The park is open till late at certain times throughout the year if you want to stay after dark. 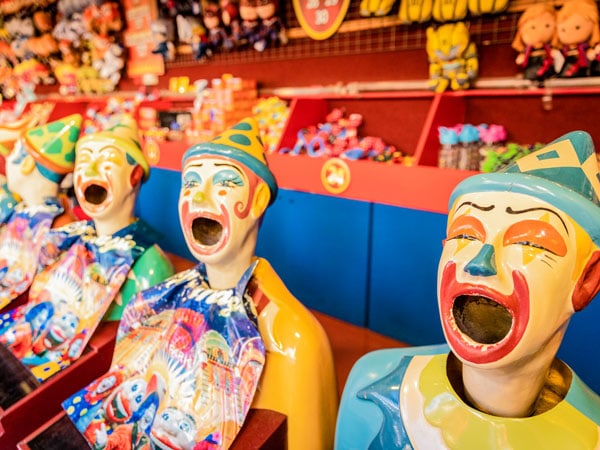 If you can’t climb the Sydney Harbour Bridge (although we seriously recommend it), the next best thing is to walk it. Find the Bridge Stairs and make your way back to the city on foot via the flat 1.5-kilometre pedestrian walkway. Enjoy the harbour views as the sun sets and the city lights start to sparkle. 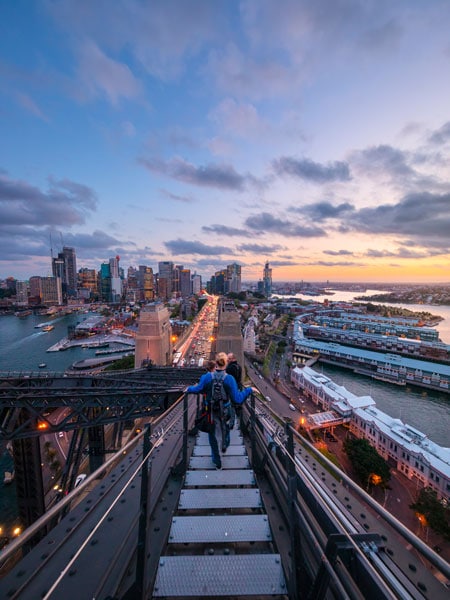 It’s only a hop, skip and jump from the CBD but Centennial Parklands is the perfect reprieve from the hustle and bustle. Described as a kids’ paradise, it has a number of playgrounds, including The Ian Potter Children’s Wild Play Garden, which encourages wild play within nature, and activities to suit young and old, from guided tours to horse riding and workshops such as Camping 101 and Astronomy in the Park. Hire a bike from Centennial Park Cycles (it also offers tandem bikes and pedal cars) and explore the 3.8 kilometres of cycle lane, which includes a dedicated learning bike track for little ones. 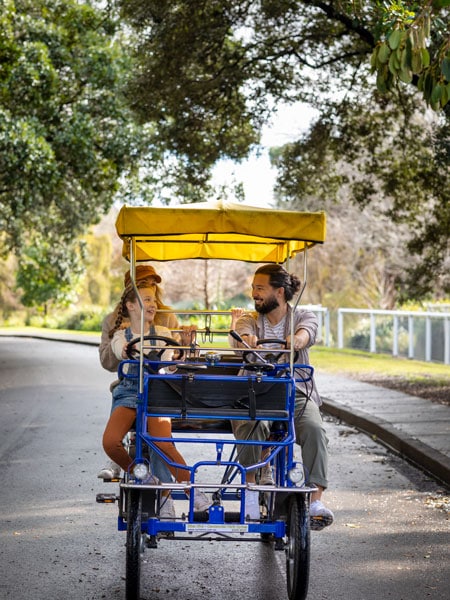 Just five kilometres south of the CBD in a heritage-listed warehouse, The Grounds of Alexandria is an urban sanctuary where fun for kids doesn’t mean forgoing good food and design. The Grounds, as it is locally known, comprises a cafe, restaurant, bar and bakery, as well as gardens, markets, a coffee roastery, florist and an animal farm. The food choices are top notch, with a focus on wholesome produce-driven menus; there are ample Insta-worthy nooks and crannies, with themed spaces such as ‘Marrakesh’ transporting patrons elsewhere; and kids will love exploring the gardens and meeting the animals including resident goats Selena Goatmez and Lady Baba.

Fill your afternoon at the imposing new Chau Chak Wing Museum at Sydney University in Camperdown, which houses the university’s extensive collection of art and historic artefacts, and also includes a giant Lego replica of Pompeii. Or if you fancy actually spending a night at the museum, stroll through Hyde Park (past the Archibald Fountain with its cute spouting turtles) to the Australian Museum, which is open from 5pm–9pm every Thursday.

Just the word ‘zoo’ is enough to drum up excitement in any child, and Sydney has one of the best. Accessed by ferry from Circular Quay, Taronga Zoo has some 350 species of animals spread out over 21 spectacular harbourside hectares. Plan to spend at least four hours here to see as many animals as you can – including Sumatran tigers, Asian elephants, gorillas, giraffes and meerkats – and to watch some of the conservation – focused shows and talks on offer. 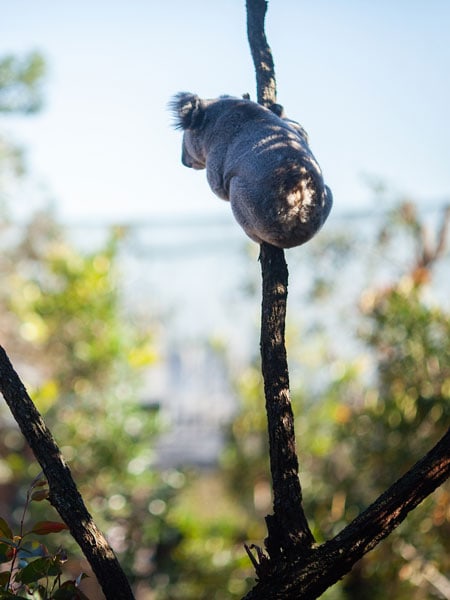 Just a short walk from Circular Quay, The Royal Botanic Garden is the oldest botanic garden this side of the equator, established in 1816. Made up of a staggering collection of plants from around the world spread across 29 hectares, this city-bound oasis is a lovely spot for a leisurely stroll (or run for energetic mini travellers). Stop by The Calyx, where the colourful inBLOOM exhibition features more than 20,000 plants, and the Palm House. There’s a miniature train to jump on when little legs start to get tired.

Exit the garden at Queen Elizabeth II Gate, which brings you to the foot of the world-famous Opera House. Some would argue the iconic sails are even more beautiful at night illuminated against the inky sky, while across the water the Harbour Bridge is just as remarkable all lit up. Meander around Circular Quay, which is popular with street performers who are always a big hit with the kids, duck into the Museum Of Contemporary Art for its outstanding museum shop, and stop for dinner at one of the restaurants or cafes in the area serving everything from contemporary Japanese to pancake stacks. 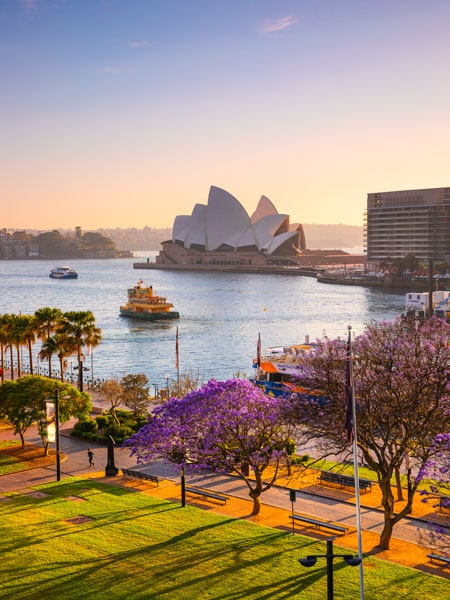 See the city from above this morning at Sydney Tower Eye. Opened in 1981, it is the city’s tallest building at 309 metres. Relax on the observation deck and take in the 360-degree views – on a clear day you can see as far as the Blue Mountains. If you are a family of thrill-seekers, book in for the Skywalk, a glass walkway that sits 268 metres above the city – this experience operates every hour from noon to 5pm for those aged 10 years and up. Back at ground level, browse the shops along the pedestrianised Pitt Street Mall. 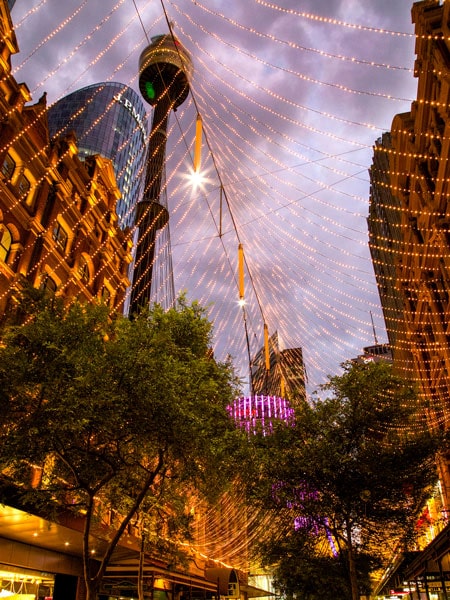 You started with Sydney’s oldest neighbourhood and now it’s time to explore its newest: Barangaroo. Join a guided Aboriginal Cultural Tour, where you’ll learn the native history of Sydney Harbour, and enjoy the newly opened harbourside walk from Cockle Bay to Walsh Bay. Named the Wulugul Walk after the local Indigenous word for kingfish, this was the missing piece that now completes the longer 11-kilometre walk between Woolloomooloo and the Anzac Bridge. Barangaroo is home to lots of great dining options, or you can pack a picnic and enjoy it on the Stargazer Lawn. 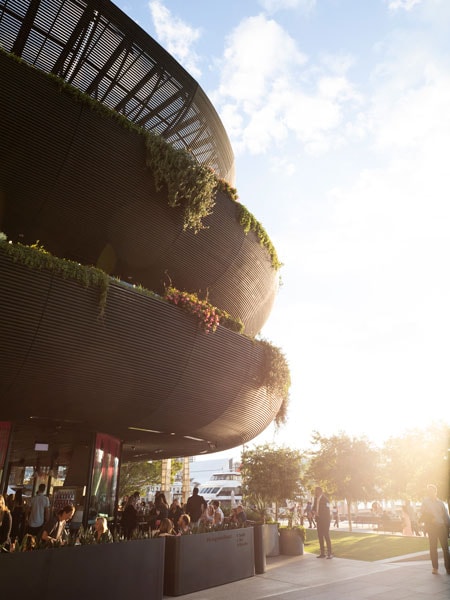 You could easily spend a few days in Darling Harbour for the seemingly endless kid-friendly experiences: Wildlife Sydney Zoo, Sea Life Sydney Aquarium, jet boats, the Ferris wheel, and the brand-new Imax Theatre opening late 2021, just to name a few. Aside from that, for some good old-fashioned (and free) rough and tumble, head to Darling Quarter. This bustling area is home to an incredible outdoor playground featuring water fountains, balance ropes, giant slides, a 21-metre flying fox and other energy-burning activities your kids will love. At night, the buildings in the Quarter are illuminated and from 6pm on Friday and Saturday, the public can orchestrate their own light display by using the controls. Grab a bite for dinner at Betty’s Burgers at the ICC (International Convention Centre) with its Nippers menu and famed Concretes – frozen custard ice-cream with toppings like lamington, cookies and cheesecake. 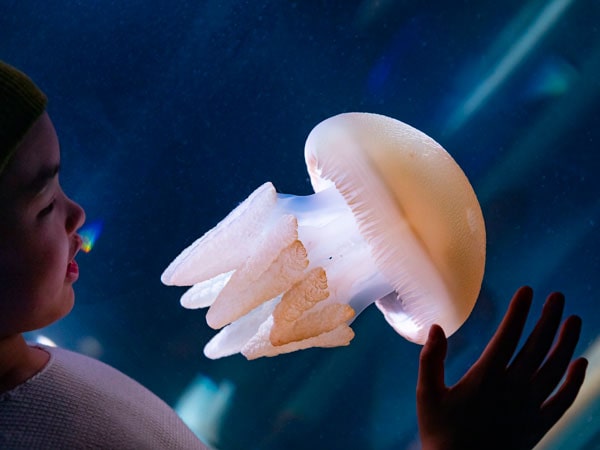 What’s a visit to Sydney without a trip to its most famous beach? Less than eight kilometres east of the CBD, Bondi Beach is a great day out, particularly on a blue-sky day in winter when there are not as many beachgoers. And while the water may be fresh, learning to surf at Bondi is one to tick off the list. Let’s Go Surfing operates private lessons come rain, hail or shine. Back on land, strap on your walking shoes for the six-kilometre Bondi to Coogee Coastal Track and keep an eye out for the whales that migrate these waters in winter. 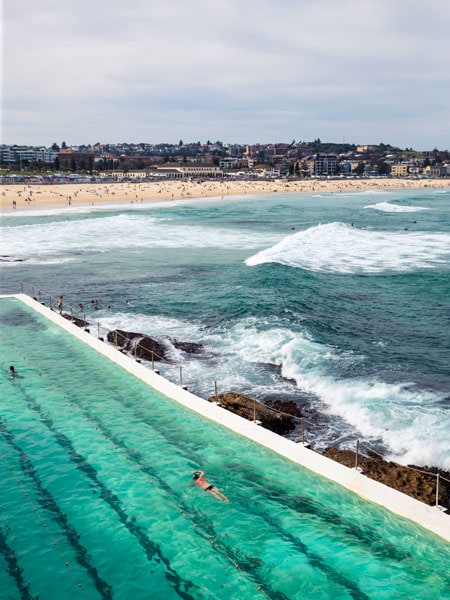 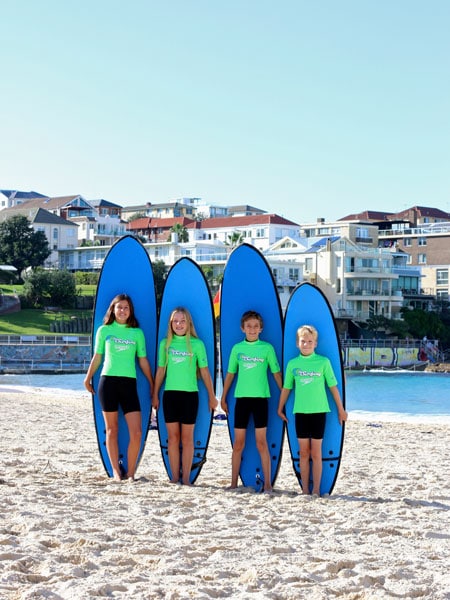 Haymarket is home to Sydney’s Chinatown, the largest in Australia. Many flock here for the authentic Chinese food – Marigold is excellent for yum cha while Darling Square precinct has everything from banh mi and ramen to Korean fried chicken and bubble tea. The heritage-listed Chinese Garden Of Friendship is also worth a visit for its exquisite design, and families will love the Powerhouse Museum for its creative and fun interactive science, technology and art displays (plus it’s free admission). 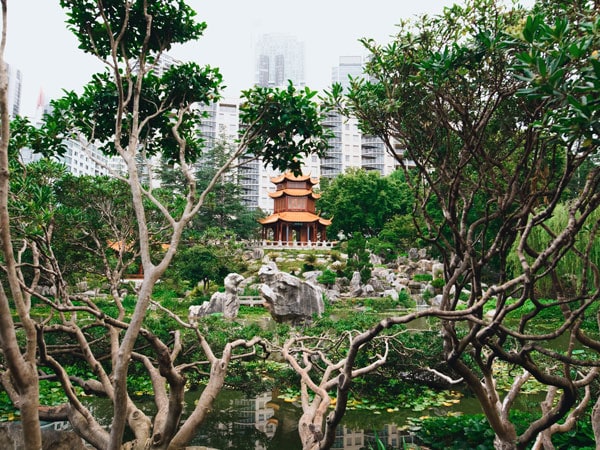 Located on the South Head peninsula in Sydney’s east, and accessible via ferry, Watsons Bay is home to some of Sydney’s prettiest and calmest beaches including Milk Beach, Nielsen Park and Camp Cove, which are popular for families and paddleboarders. The Federation Cliff Walk is a five-kilometre clifftop walk that you can do from here, which takes in some incredible ocean views and The Gap Lookout (not suitable for prams).

The easiest way to get around the inner CBD is onboard Sydney Trains. The City Circle loop connects Central (Sydney’s main train station) with stations such as Town Hall, Wynyard and Circular Quay, where you’ll find most of the popular landmarks and activities. The Light Rail is a good option to get from Central to Darling Harbour, and from Circular Quay to Moore Park (for Centennial Parklands), while the extensive bus network will take you further afield to places like Bondi Beach and Alexandria. Jump onboard Sydney Ferries from Circular Quay to reach Taronga Zoo, Luna Park, Barangaroo and more. Fares can be paid using a pre-loaded Opal Card or a tap-and-go credit card. 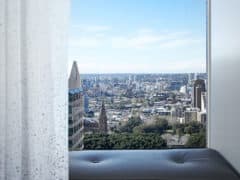 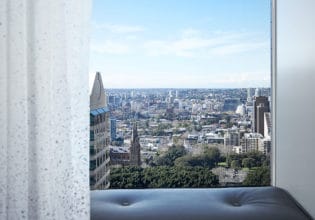 Is this the best itinerary for a Sydney staycation?

Home to the 29 groups of the Eora Nation, the most populous city in Australia has a lot more to offer than just ocean air, ferries and an old arched b... 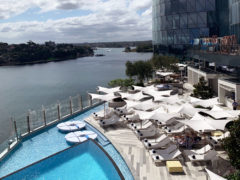 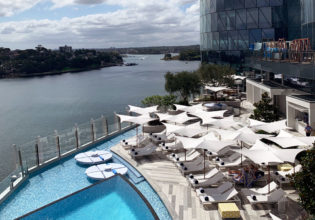 A night at the new luxe Crown Towers Sydney

Crown Towers Sydney stands as a sky-scraping jewel on the waterfront of the Harbour City, steadfastly reflecting her beauty from every angle. Here, we... 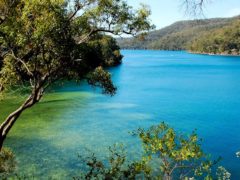 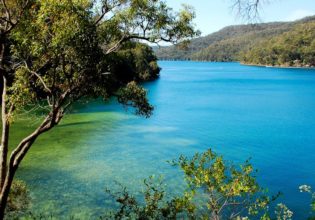 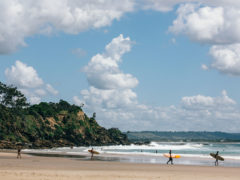 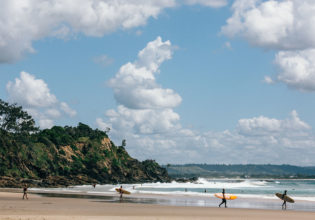