There is a long-standing rivalry between the Tropical North Queensland towns of Tully, Babinda and Innisfail as to which can claim to be the wettest. According to legend it became a two-horse race when Innisfail’s rainfall dropped markedly when the rain gauge was moved from next to the public toilets.

However, the rivalry took a new twist when Tully erected the Golden Gumboot, which has attracted a flood of visitors since its opening in May 2003. The inspiration came from the gumboot trophy awarded annually since 1970 to the town with the highest rainfall. The community go-ahead was given in January 2002 after a huge effort spearheaded by local councillor Ron Hunt and supported by over 30 local businesses.

However, not everyone was happy. The North Queensland UFO Society wanted a big UFO instead. And when Tully’s Rotary Club decided to claim the gumboot permanently, Babinda, which has had more rainfall in recent years, responded with plans to build a giant umbrella. This has not yet happened.

The gumboot is 6.1 metres long and 8 metres high – just a fraction higher than the 7.93 metres of rainfall recorded by Tully in 1950, the highest annual rainfall ever recorded by an Aussie town. Climbing up the gumboot is a white-lipped green tree frog carved by Roger Chandler. A mechanical rain gauge runs from the heel to the calf of the boot. An internal spiral staircase winds its way up to a viewing platform overlooking the town.

The Gumboot was built in bronzed fibreglass by sculptor Bryan Newell in nearby Millaa Millaa (the name means “rain, rain”). It was modelled on Bryan’s own gumboot and trucked to Tully under police escort. The whole thing cost $30,000, which included a grant from the Queensland Government and $3000 from the Bata Shoe Company for branding on the boot.

Fittingly, the finish date was delayed more than a month by heavy rain. It was finally unveiled on May 10, 2003, a day marked by torrential showers. The heavy rain drenched visiting politicians – locals instantly deemed it $30,000 well spent.

While there’s no official souvenir shop at the Golden Gumboot, you can pick up trinkets – keyrings, postcards magnets and the like – at the Tully Visitor’s Centre, which also has a record of annual rainfalls for all three towns. 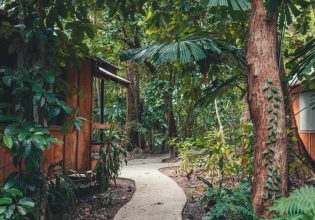