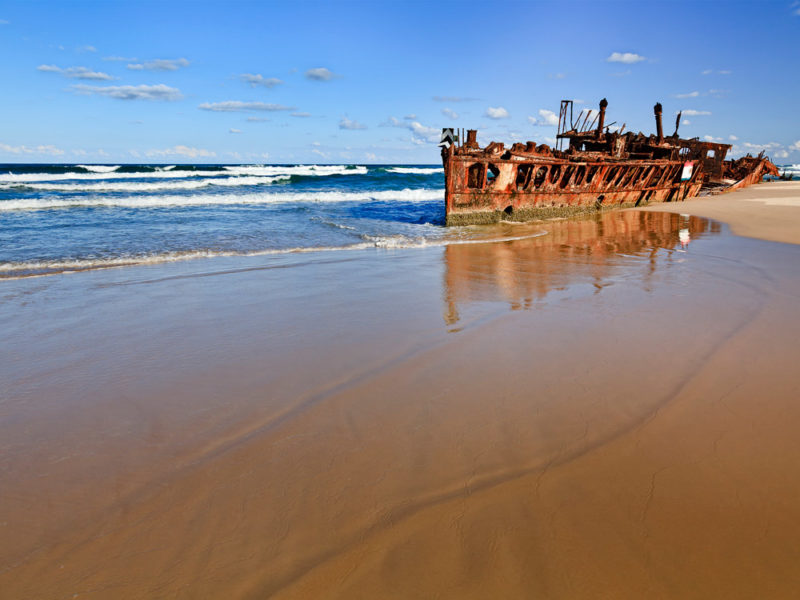 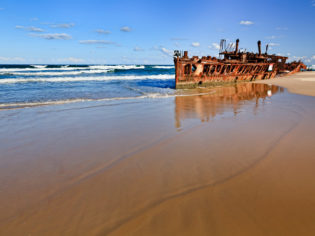 Ever daydreamed about the world’s largest sand island, K’gari (Fraser Island)? Wondered what lies across the 166,000 hectares of land that’s located off the coast of Hervey Bay? Here are 10 facts you didn’t know about the island. 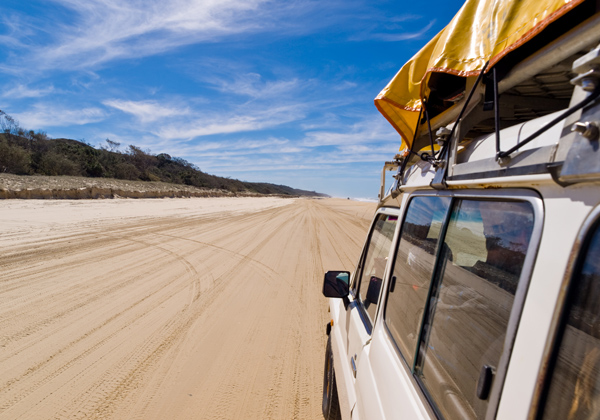 Hire a 4WD to drive around the island.

This UNESCO World Heritage-listed island is home to a myriad of wildlife and plant life, as well as a rich and incredible history. It is estimated that the island is over 800,000 years old, and for 5,000 of those years, the Butchulla people occupied the land.

Measuring in at 123 kilometres long and approximately 20 kilometres wide, it is classified as the world’s largest sand island. Beating out North Stradbroke Island and Moreton Island for first. 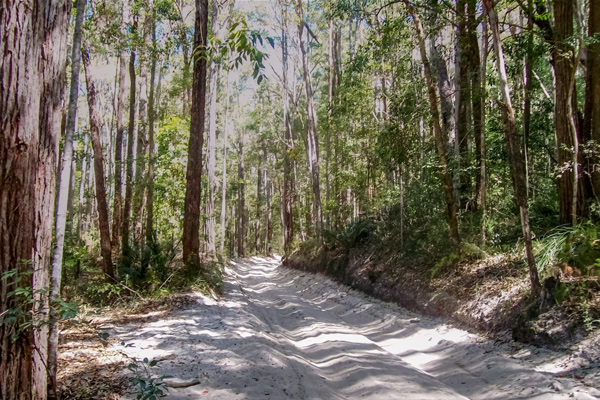 Despite being entirely made of sand, K’gari (Fraser Island)’s rainforest has thrived through these conditions.

Quite literally, everything on K’gari (Fraser Island) grows out of the sand. Generally, sand is not an ideal environment for plant life to flourish. But the sand on K’gari contains mycorrhizal fungi present, providing nutrients for the perfect atmosphere for plants to grow. The oldest trees on the island are brush box, aged at around 1,200 years old.

2. The sand is purer than the Sahara Desert

All the sand on K’gari (Fraser Island) is originally from the south of the border. During the last Ice Age, it was all swept up by prevailing winds, from the New South Wales’ tablelands. It is believed that the sand on the island is purer than that of the Sahara Desert. Another record held here is that Mt Bowarrady’s sand dunes are considered one of the tallest in the world, standing high at 240 metres. And as the land is covered in silica sand, it has created brown rocks from the sand cemented together (also known as coffee rocks). 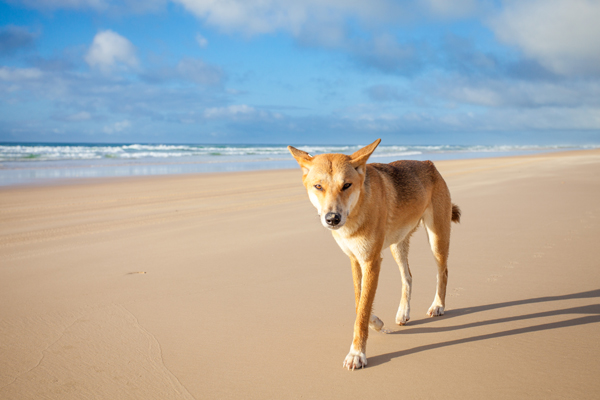 The island’s dingoes are amongst the purest breeds in the world.

The famous dingoes that inhabit K’gari (Fraser Island) are classified as the purest strain of dingo. Being protected by the law and Dingo Conservation society, the island prohibits domestic dogs from entering, in case of cross-breeding.

Originally the dingoes were introduced to Australia about 5,000 years before Captain Cook claimed Australia, by South East Asian Seafarers. At the time, K’gari (Fraser Island) was only a couple of kilometres from the mainland as it had just cut off and the dingoes were able to swim to the island.

Queensland Parks and Wildlife Service Rangers have created a guide on how to be dingo safe.

The local Butchella people who have lived on the land for thousands of years originally named the island K’gari (pronounced “gurri”), meaning paradise. That was until 1836 when a Scottish woman named Eliza Fraser was shipwrecked on the island with her husband, who died there, and the ship’s crew. After her rescue, she claimed the island’s native people mistreated her. A narrative that directly led to the massacre and dispossession of the Butchella people.

After years of advocating for the original name to be reinstated, the Butchella people finally reclaimed their island’s name in September 2021. The island is now referred to as K’gari (Fraser Island).

5. The island is home to many perched lakes 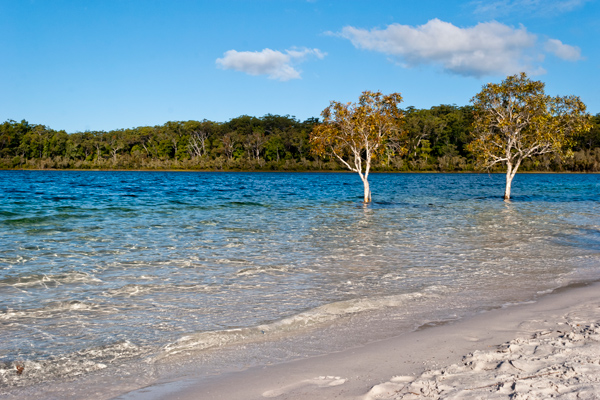 The most popular perched lake on K’gari (Fraser Island).

Lake Boomanjin, one of the island’s prettier sights, is officially the largest perched lake in the world at 190 hectares. A perched lake is above the water table, only containing rainwater and doesn’t flow to the ocean, and K’gari (Fraser Island) has multiple that you can swim in. Lake McKenzie, another perched lake on the island, is K’gari (Fraser Island)’s most popular tourist spot. The water in Lake McKenzie is so pure that it is unsuitable for many sea life to live in – and that is only one of 12 weird and wonderful things to know about Lake McKenzie.

6. 75 Mile Beach is a national highway 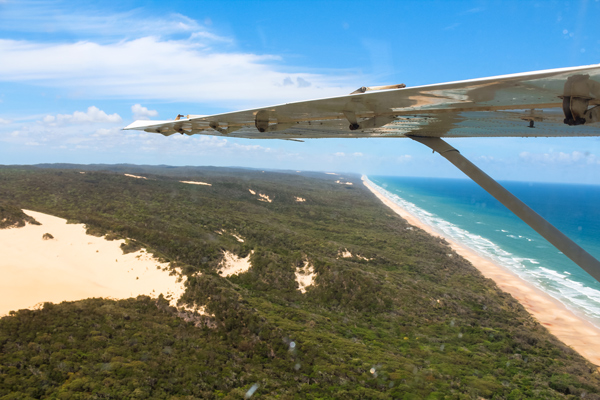 Most people don’t know, but, 75 Mile Beach is a registered national highway, as well as a landing strip for aircrafts. It is home to so many tourist attractions, including the Maheno shipwreck, Champagne pools and Indian Head (a volcanic rock formation). Locals advise people not to swim on the beach due to dangerous currents. Many like to 4WD down the ‘highway’ to explore the sites, just be sure to read our tips to sand driving in advance if you plan to try it yourself.

If you think your commute to work is a drag, spare a thought for the flying foxes. They have to fly to the island every night from Hervey Bay, as there are no caves on K’gari (Fraser Island) for them to sleep in during the day. K’gari (Fraser Island) has around 19 different flying foxes visiting the island regularly. With fruit bats and insectivorous bats, making up the majority.

8. One of its main attractions is a shipwreck

In 1935 a seasonal cyclone caused the crash and wreckage of the SS Maheno. The ship was originally housing hospital patients in Sydney during WWI and was then sold to a Japanese company. As they began to sail towards Osaka they got hit and washed up on 75 Mile Beach. The survivors attempted to fix the boat but were unsuccessful, hence the abandoned shipwreck. 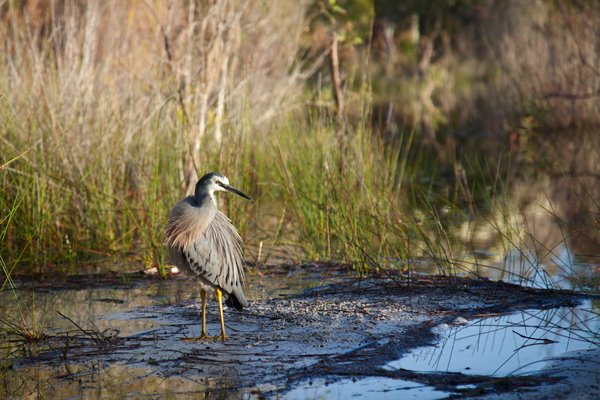 354 species of birds have been discovered on Fraser.

So far, just over 350 species of birds have been found on K’gari (Fraser Island). A large number of these birds are classified as rare or vulnerable. The island is home to nocturnal birds, birds of prey and wading birds. Birdwatching is a popular activity for tourists who visit the island. Yearly, birds come to the land from as far as Japan, Alaska and Siberia.

10. It was a secret training base in WWII

During WWII, K’gari (Fraser Island) was used as a secret training base for commando troops. Deemed perfect for both jungle and amphibious training, the site saw more than 900 Allied soldiers put through a gruelling regime.

The men trained daily from early in the morning stretching through too late at night. The training included an 8-kilometre run in full uniform across to Lake McKenzie and back. They were taught how to pull off a silent killing and how to survive in the jungle.