A weekend full of surprises on Magnetic Island, QLD Magnetic Island has always attracted those seeking a slower pace of life, but as new ways of experiencing it bubble up, it’s set for a surge in popularity with those a little more discerning than the backpacker crowd.

The humidity of the wet season clings like Lycra as we climb the granite steps cut into the headland. It’s only a short trail – 1.7 kilometres, or so the sign says – but I’ve already lost track of how long we’ve been walking. I’m too busy smiling, stopping frequently to marvel at the beauty dished up at every altitude – slivers of sapphire sea, gnarled trees sprouting from car-sized boulders smattered with lichen. The track forks and my friend and I descend towards the sea, somehow summoning butterflies to surround us while freshwater flows down a thin ravine beside our feet. We reach the bottom, a clearing, and endless blue sky illuminating the frangipani trees and coconut palms that frame Radical Bay. It’s the most magical part of the day and we’ve got the place to ourselves. But as radical as it may seem, this is far from an isolated incident on Magnetic Island. I’ve returned to Magnetic Island (Yunbenun) many times since first visiting a decade ago, and it never fails to tug at the heartstrings. Lying eight kilometres offshore from Townsville, this boulder-strewn beauty is the only Great Barrier Reef island with its own postcode, and a clutch of 2100 people who call it home. It’s surrounded by 23 bays, protecting the kinds of beaches Alex Garland tried to distil in his novel The Beach, and the fact most are only accessible by boat or sweaty hike makes them all the more rewarding.

Maggie, as it’s more affectionately known, has always appealed to real-world defectors and now it’s increasingly becoming a hotbed of digital nomads. The island’s natural magnetism is what prompted designer Frankie Ratford to sell everything she owned and buy an A-frame house in Horseshoe Bay to list on Airbnb. After a swift renovation, Maggie A-frame was born and I’ve booked in to reacquaint myself with Maggie’s charms. The SeaLink ferry approaches its arrival point at Nelly Bay

Any trip to Yunbenun starts with the short 20-minute ferry ride from Townsville and hiring a car; the mini Mokes of my memory usurped by fancy topless Fiats. As we approach Horseshoe Bay, The Forts Junction – where the island’s most popular hike to reach the Second World War fortifications begins – is abuzz with construction workers toiling at the $2.35-million redevelopment to the car park and walking trail (expected to be completed by May 2021). But it’s not just roadworks and trail upgrades that hint at a revitalisation. A fine diner, wine bar, food trucks and a jungle-themed coworking space (another project by Maggie A-frame owner, Frankie) are all new kids on the block. Look up in Maggie

Much of the action centres around Nelly Bay where Saltwater Magnetic Island opened about 12 months ago; its head chef trained at Neil Perry’s Rockpool. They were soon joined by Smugglers Wine Bar in a neighbouring blue cottage, where food trucks complement a short tapas-style menu and Australian-leaning wine list. In February, Townsville’s popular Otto’s Market deli opened an outpost in Nelly Bay, stocked with gourmet cheeses, sandwiches and other picnic essentials. And, down on the waterfront, the brightly coloured Shaka van dishes up acai bowls and healthy brekkies in eco-friendly containers (but you can BYO cup and bowl to do one better for the environment).

This fresh influx is welcomed by Clare Ley, who along with husband Paul, runs Pilgrim Sailing. “Businesses come and go, not everyone can live here, but there’s been a growth in quality products, which is amazing,” she says. “There’s enough to do here but it’s not by any stretch a Noosa or a Gold Coast, and that’s its absolute charm.” Clare and Paul made Maggie their permanent home 12 months ago after alternating seasons between Sydney and the island for five years. They introduced The Beach Club – gourmet picnics on secluded beaches – in July 2020, in the midst of COVID-19 lockdowns, which quickly became the most popular experience on the books. “It’s been crazy busy from the moment we opened,” she tells me as we try to find an available spot in the schedule.

Angry clouds slump on the horizon the morning of our picnic, but we’re keen to head out all the same. I’m not sure even a cyclone would deter our unflappable skipper, Clayton Scott, who pulls a zippy yellow tender onto the sand at Horseshoe Bay for us to climb aboard. It’s the same spot he landed 15 years ago after sailing solo around Australia for five years, promptly met his wife in a backpacker bar, and decided to stay. “I’d built up a successful fruit and veg business in Cairns and, by the time I was 31, I had the house, the car, the boat, everything and I thought, ‘What if I sold it all and went sailing?’ So I did,” he says.

You haven’t truly seen Maggie until you see her from the water. At sea level, her dramatic boulders, towering hoop pines and ironbarks look otherworldly: a dry tropics forest tumbling into coral-fringed waters. Being the tail-end of the wet season, it’s a vivid green painting.
Monolithic boulders, like giant elephants, congregate at the water’s edge. Another rises majestically out of the sea to our right as we round the northern edge of the island. We’ve been granted private access to untamed bays of dizzying beauty; unless you have your own boat, there’s only a handful of permits provided for operators to bring people here, and only on certain days. Take a dip at Endeavour Falls in Arcadia (Petersen Creek)

We spy the much-Instagrammed Lovers Bay, a sliver of sand wedged between two rocky headlands. Then Clayton runs us through the Five Beach Bay group, starting with Maud Bay where the same family has lived for three generations in an old whaling station, and onto Norris, Joyce and Wilson, where you can climb to a waterfall tall enough to stand under.

The clouds temporarily part for the finale as we land on Huntingfield Bay; a dream of wide golden sands where a freshwater pool at the foot of a boulder-lined valley makes the perfect spot for Beach Club Picnic guests to plop themselves into and peel fresh North Queensland prawns. We clamber up the rocks a little to reach the source. “It only runs for about three weeks after rain, so you’re lucky,” Clayton says before wading through the pool to sit beneath the waterfall, fully clothed. You could take me to the fanciest waterfront restaurant in the world for lunch and it wouldn’t stand up to this.

Within three short days, I realise Maggie and I have moved to a new phase of our relationship; I’ve seen sides of her I never knew existed. And yet I know I’ve only just scratched the surface of what she has to show me.

Magnetic Island is a 20-minute ferry ride with SeaLink from Townsville in North Queensland. Qantas and Virgin fly to Townsville from Brisbane direct with connections from other major capitals. Jetstar flies from Brisbane, Sydney and Melbourne to Townsville direct.

Maggie A-frame is a barefoot island hideaway, sleeping up to five people, framed by palms and mango trees a short walk from Horseshoe Bay.

Best of Magnetic manages a portfolio of architecturally designed homes such as Headland House, built among the boulders above Picnic Bay with private beach access, and the cute and compact (and also pet-friendly) Little Bush Hut in Nelly Bay. bestofmagnetic.com

The Beach Club Magnetic Island picnic with boat transfer starts from $349 per couple with an additional charge to access more remote northern beaches, such as Five Beach Bay, and options to upgrade from gourmet antipasto to fresh local seafood. Where to stay in and around Townsville

From bright and breezy beachfront motels to tropical resorts with poolside bars to luxury island hideaways, Townsville has a tonne of accommodation op... 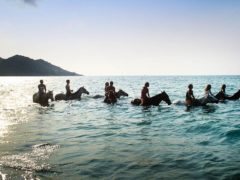 Why you should visit Magnetic Island, QLD

It was business as usual for travel journalist Craig Tansley, when an invitation to Magnetic Island arrived in his inbox. Next thing he knew, he was m...