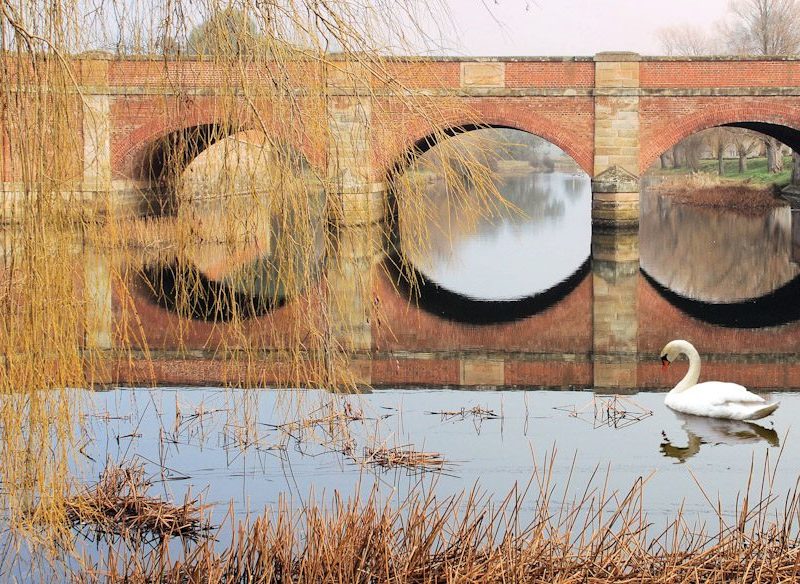 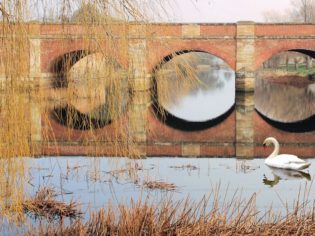 A trio of historic Tasmanian bridges – three of the four oldest in Australia – are the destination as well as part of the journey.

In Tasmania’s historic heartland between Hobart and Launceston, there are three bridges that span more than rivers. Convict-built at Richmond (1825), Ross (1836) and Campbell Town (1838), they bridge a gulf of time to a vanished era.

Cross them and feel the past beneath your feet. Ghosts may follow you.

Frozen in time when a new highway to Sorell bypassed it in 1872, Richmond is now a convict-era time capsule: stone buildings delightfully framed by lightly forested hills and a fetchingly curved Georgian streetscape. 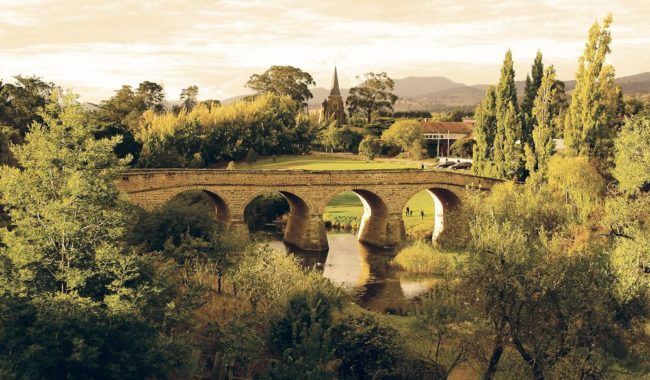 Spanning the tranquil Coal River, Richmond Bridge’s elegant arches are the perfect backdrop to a languid afternoon of duck-feeding and novel-reading on grassy banks. It looks more The Wind in the Willows than His Natural Life, but it wasn’t built for romantic views.

Opened in January 1825, the bridge was part of the colonial thrust into fertile farmland. It’s not only Australia’s oldest bridge, it’s also our most haunted – knowledge that adds a dash of eerie to an after-dark stroll across, even if you’re more Scully than Mulder regarding the supernatural.

The most sinister spook is George Grover, a hated convict overseer and flogger. Staggering home drunk in 1832, he fell asleep on the bridge to be heaved over the side by persons unknown. Found on rocks eight metres below, he named an assailant with his dying words, but no one was convicted. 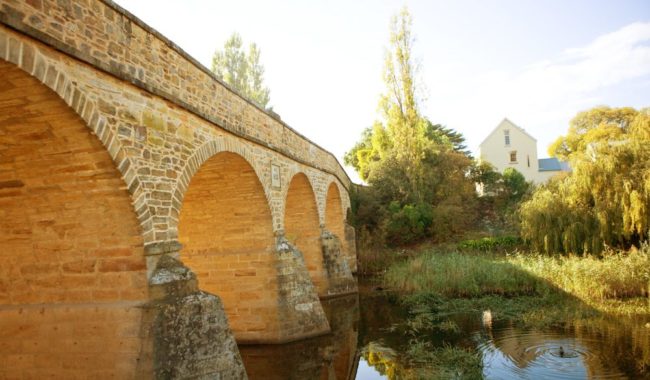 Tasmania’s Richmond Bridge is the oldest bridge in Australia.

Today Grover shares the bridge’s ghost roster with a headless man (Grover himself, some say), a long-dead local in a straw boater, and ‘Grover’s Dog’ – a phantom pooch that follows women and children across at night.

If Richmond Bridge shows how convicts once revenged themselves on the system by murderous misuse of its infrastructure, Ross Bridge shows the psychic wounds of transportation healed by the power of art.

Ross is more laid-back than Richmond with a population of around 400, 117 kilometres from Hobart and less visited by day-tripping coach tours. 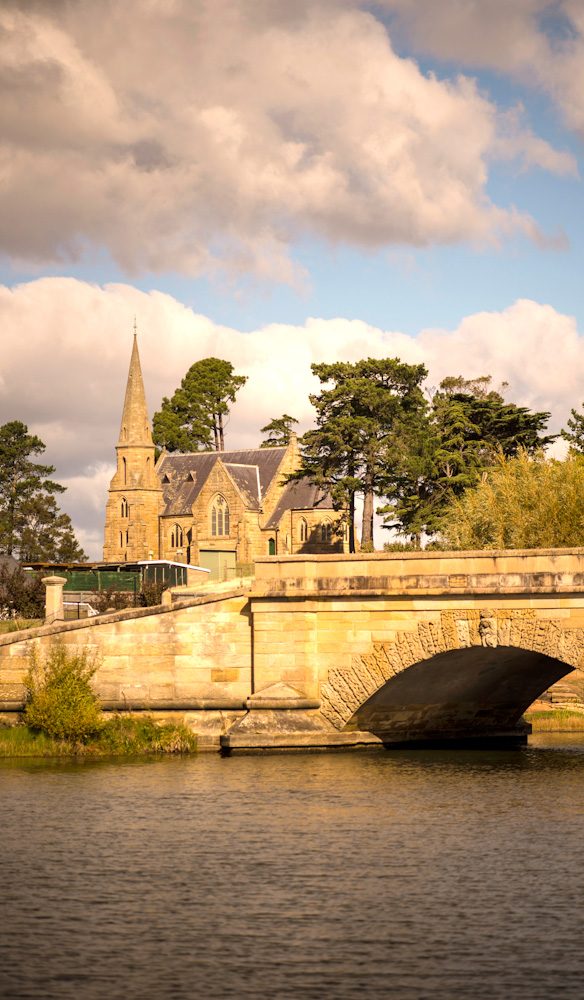 The Ross bridge in Tasmania has 186 intricate carvings etched onto the surface.

A tiny island of convict-built, Georgian-era real estate in a sea of sheep pastures, Ross is a storybook stone village that rewards a relaxed stroll and a sharp eye.

Look closely at Ross Bridge (binoculars are ideal) and you might feel it looking right back at you.

Grim elven faces abound, along with swirling patterns and weird creatures. The dazzling array of 186 carvings is an outburst of creative artistry unmatched by any other convict construction in Australia.

Real people are supposedly depicted. Lieutenant-governor Arthur looks like death warmed up under a big hat. A flower by an aboriginal head has been interpreted as a sympathetic gesture toward a people already facing destruction.

The so-called ‘King and Queen’ have a playing-card look, but they’re likely Danish adventurer Jørgen Jørgensen and his wife, Norah.

The nickname is doubly appropriate as Jørgensen was known as the ‘King of Iceland’ – in 1809 he briefly held executive power there after a coup.

Dreadfully downwardly mobile, Jørgensen ended up a convict constable at Ross, driven nuts by the theft of quarried stone that was slowing bridge-building to a snail’s pace. 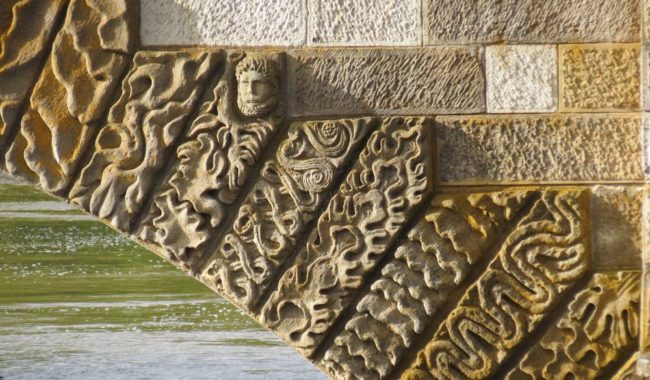 The intricate carvings on Ross Bridge were sculpted by a convict, Daniel Herbert.

One north-facing keystone has a lion devouring a lamb, just possibly a startlingly bold comment on imperial cruelties. Yet the convict sculptor, a highwayman named Daniel Herbert, won a pardon for his work.

Whether or not he intended the subversive symbolism now seen in his carvings, Herbert was hell-bent on embedding the human spirit into an enterprise that needed nothing more than basic functionality.

Strangely, none of the project’s many official documents mention his over-the-top masonry, but someone in charge must have given the OK, perhaps as a morale booster.

If so, this glimmer of kindness has left a unique legacy – the world’s only stone bridge with every arch smothered in carvings.

The history of Ross Bridge

The old bridge was blown up and a picnic of cold cuts heartily tucked into. It was a big day for the guv’nor – he’d come straight from launching work on another new bridge project at Campbell Town, 12 kilometres north.

Ross was more important back then, the Midlands’ main convict garrison, but Campbell Town is now the busier centre.

Unlike sleepy, bypassed Ross, it’s still on the Midland Highway, with garages and modern shops catering to its Hobart-Launceston pitstop raison d’être.

This makes the Red Bridge (1838), on the southern approach, the oldest bridge on Australia’s national grid. Unlike its stone siblings, the Red Bridge is brick – 1.25 million of them, wheeled in barrows all the way from Ross.

Luckily the scene is so restful; it’s tiring just thinking about that kind of hard yakka. But then the idyllic Elizabeth River, where nodding willows shade the banks and native ducks potter in peace, is also convict-created.

The bridge was put up over dry land and the river made to flow beneath it, with two kilometres of hand-dug channel.

A riverside park has chainsaw sculptures paying tribute to those unknown bridge-workers, the first to see their handiwork’s deep ruddy glow in the afternoon sun.

Close by the bridge, the Foxhunter’s Return went up in the 1830s to accommodate coach travellers. The building now hosts two bookshops – including one (The Book Cellar) in the cellars where bridge-building convicts were quartered overnight.

The Red Bridge wasn’t just convict-built – it was also convict-designed. James Blackburn was transported for forgery in 1833, but as a qualified architect he was so useful he went straight from convict ship to the Department of Roads and Bridges – sentenced to office politics, in effect. 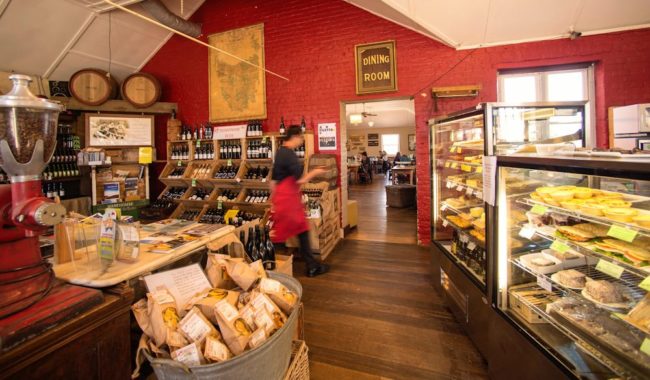 He’d surely be pleased to find his design fighting fit two centuries later, taking two million vehicles a year and, along with its soulmates at Richmond and Ross, an enduring reminder of a past that still echoes in the fabric of this land.

Drive from Hobart or Launceston via the Midland Highway or B31 (Richmond).

In town, check out Australia’s oldest gaol and Catholic church.

Ross The Tasmanian Wool Centre has much bridge info.

The Ross Female Factory site is another unique convict-era relic.

More to do in Tasmania

5 Tasmanian wilderness walks with all the creature comforts

Seeing the Southern Lights: the where, the when & the what