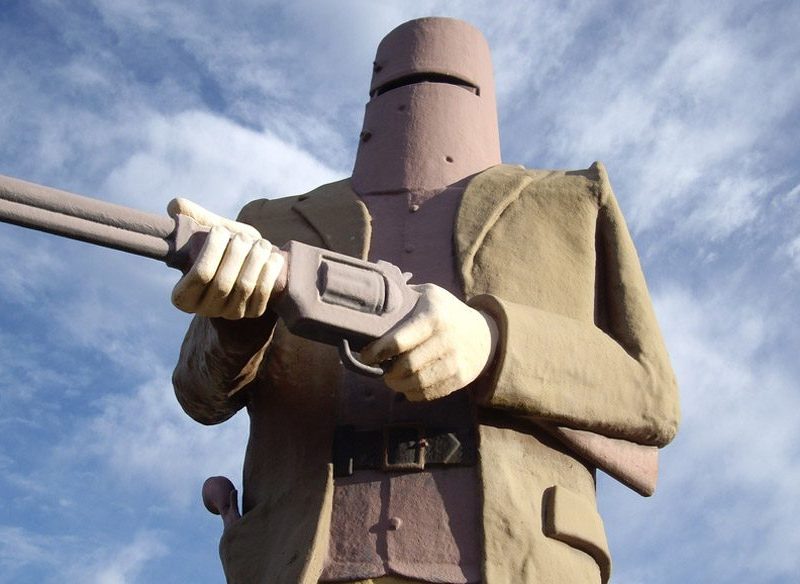 There are actually two Big Ned Kellys in Australia. But since the wild colonial boy and his mob never got within cooee of Maryborough, in Queensland, where a seven-metre high Ned fronts the Ned Kelly Hotel, we’ll stay in Glenrowan, scene of The Kelly Gang’s last stand.

These days you’d be ill advised to hold up the Glenrowan Post Office. Standing guard outside is a six-metre high Big Ned Kelly, depicted just as he appeared when he was captured near the town, in June 1880, in his trademark charcoal armour and heavy mask, rifle in hand.

Remarkably, no-one quite remembers when the first Big Ned Kelly was built in Glenrowan, but it was stolen and dumped in the river. Bob Hempel built Ned Kelly II for his “Kellyland” video theatre and museum in 1980, the 100th anniversary of Ned’s death, but moved it inside the exhibit eight years later, where it could only be seen for a price. Rod and Chris Gerret, owners of Kate’s Cottage, which houses a Ned Kelly memorial museum, then decided to put Glenrowan on the map in a big way. Says Chris “We wanted somewhere people could be photographed for free and big things seemed to be all the rage at the time, so we decided to build a Big Ned Kelly to keep up with the rest.”

They commissioned Kevin Thomas, a Sydney special effects technician, to build the six-metre high, 1.5 tonne fibreglass outlaw at a cost of $12,000. It took eleven hours to truck down from Sydney (there were numerous hold-ups along the way) and Big Ned Kelly III was unveiled on 14 April, 1992. The occasion attracted newspaper coverage from around the country, including the front page of Melbourne’s Herald-Sun, alongside a story about another Australian outlaw, Alan Bond, who’d been jailed for fraud that very day.

There’s a wide range of Kelly memorabilia at Kate’s Cottage next door, including a replica of the Kelly homestead, complete with furnishings. They also sell two different kinds of Ned Kelly snowdomes. In fact, Glenrowan is a cornucopia of Kellyana – you’ll find Ned’s Burger House, the Kelly Country Motel, Kelly’s Cookhouse Cafe, and two Ned Kelly museums. Kellyland offers a live animated show called Ned Kelly’s Last Stand, comprising four different sets, each relating to a different part of the story and using original props including an authentic handgun once used by Ned himself.

The Glenrowan Cobb & Co Museum is a large underground cellar display specialising in the Kelly Outbreak. The Blacksmith Shop and Museum, the focus of which is actually farm machinery from the past that has been gathered locally, also specialises in Kelly Gang souvenirs and practical items. There’s even a Siege Site walk that winds its way past several of the locations featured in Ned’s last stand. You can take the guided tour or grab a map and explore with your own accomplices.

Since being bypassed by the Hume Freeway, Glenrowan, 220 kilometres northwest of Melbourne, is a pretty quiet village these days. We can’t help feeling Ned’s a bit lonely. Perhaps the good people of Glenrowan could see their way clear to having the rest of the gang (brother Dan, Steve Hart and Joe Byrne) take their place alongside him once more. I for one would certainly make the trip to see the first Big Ned Kelly Gang in the country.